General Robert Wood Johnson, the author of Our Credo and a tremendously creative and far-seeing business leader, was once asked to define business.  He came up with a three-word definition:  “business is people.”  Johnson explained that the things most people thought of when they thought of a business:  buildings, equipment, products, were all elements of a business, but it was the people – our employees, with all of their ideas and expertise – who actually were the business and brought the business to life.  In celebration of this Labor Day, here’s a look at some of the many women and men who brought Johnson & Johnson to life throughout our history.  Some of these photos from our archives have never been published before.

Johnson & Johnson began in 1886 with just 14 employees:  eight women and six men, plus our three founders.  These 14 employees were recruited specifically by Company founder James Wood Johnson from Seabury & Johnson, Robert Wood Johnson’s previous business partnership.  James Johnson would have chosen these particular employees because they were innovative and willing to try new things.  Some of them -- or many of them -- likely had been involved with Robert’s efforts – not shared by his business partner – to get “Listerism,” the manufacture of mass-produced, ready to use products for sterile surgery, off the ground at Seabury & Johnson. These eight women and six men were willing to leave an established company to follow the Johnson brothers and help start a new business that made the first mass produced sterile surgical dressings and sterile sutures in the U.S.  Today the company they helped get off the ground has grown to employ almost 128,000 of their like-minded modern day colleagues across the world.

Perhaps the earliest employee photograph in our archives is this photo from 1891 of Johnson & Johnson employees preparing sterile surgical gauze. Are any of the women in this photo among our original 1886 women employees?  We don’t know, but it’s certainly possible.

Here’s a never been published photo of two employees from the Extract Department, over a century ago.  These employees likely would have worked with ingredients that went into medicated plasters.  Their responsibilities are reflected in their work clothing, reminiscent of early descriptions of Company founder Robert Wood Johnson with rolled up shirtsleeves and up to his elbows in medicated plaster ingredients.

Working women have helped Johnson & Johnson grow from our beginnings in 1886.  Here are a few of our Gauze Mill employees around 100 years ago.  Many of these employees were from New Brunswick, New Jersey’s large Hungarian community, and they brought their language and culture to Johnson & Johnson.

Here are a group of very young-looking employees around a century ago.  Alert readers will have noticed the large wheel and belt suspended from the ceiling in the photograph:  it would have been used to generate power to run machinery.  In the earliest days of the Company, manufacturing machinery was powered by belts driven by steam power, until our new Power House in 1907 (which is now our Museum building!) updated that to the latest electrical power.

Here are three more employees from around  the 1920s – in an updated version of the classic Johnson & Johnson striped uniform and cap that women in our manufacturing facilities wore earlier in our history. 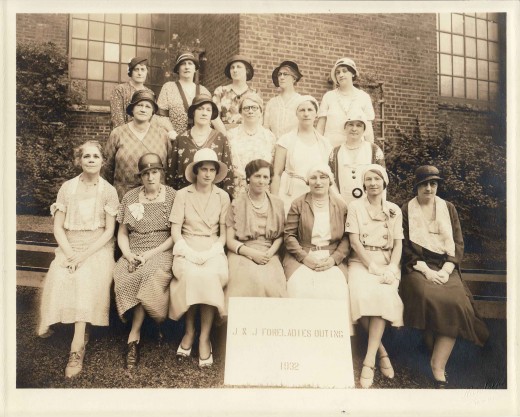 A photograph taken at the J&J Foreladies Outing in 1932.  These were women who had supervisory roles, and they certainly look like a no-nonsense group.   Generations before this photo was taken, in 1908, the Company had a number of women in supervisory positions, including the management of our Aseptic Department, which was our sterile manufacturing.

And now that everyone’s had a glimpse of Johnson & Johnson employees at work from 1887 to the 1940s, here are the members of our employee Glee Club in 1951.  Never the type to do things by half-measures, our employee Glee Club gave public concerts throughout New Jersey, sang on the radio and performed with a Hollywood movie star.  Their story is here.

General Robert Wood Johnson, the author of Our Credo, began his Johnson & Johnson career as a teenaged mill hand, working closely with the mill employees – many of whom were from New Brunswick’s Hungarian community – and they took him under their wing as he grew up.  After Johnson took over the leadership of the Company in 1932, he remained close to the Company’s employees, advocating for higher wages and shorter working hours for all workers nationally during the Great Depression.  Johnson’s championing of wages and hours for workers led directly to the writing of Our Credo 70 years ago, in 1943.

From all of us at Johnson & Johnson, past, present and future, we wish everyone a happy Labor Day.

The sterile surgical gauze picture from 1891, caught my eye, with the work tables having reflections from the bottles, etc. To have metal or aluminum use for table tops that early in time, just amazed me. Love this article, Happy Labor Day all.

Hi Margaret - I have retained a lot of material from J and J's history in south africa. Let me know ifyou want me to scan anything and send to you.

Johnson & Johnson is still one of the best company in the world guided by the J&J Credo.