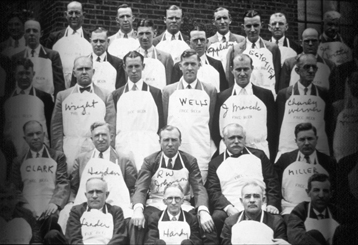 In my last post, I mentioned that Robert Wood Johnson, son of one of the Company’s founders, was able to put many of his ideas about running a business into practice when he became president of Johnson & Johnson in 1932.  Having grown up around Johnson & Johnson, even accompanying his father to business meetings as a child, the younger Robert Wood Johnson had very definite ideas about business and social responsibility.  What made his opportunity to implement those ideas particularly challenging was the fact that it was during the depths of the Great Depression.   Johnson didn’t let that stop him and, when his ideas worked at Johnson & Johnson, he didn’t hesitate to speak out to the press, to other industrialists and to the new Roosevelt administration.

Johnson’s first concern was to make sure the Company was able to weather the financial crisis of the Depression, and my last post talks about some of the things he did.  Although Johnson supported President Herbert Hoover, who was running for re-election during the 1932 presidential campaign, he didn’t hesitate to criticize Hoover’s economic policies, saying:  “ ‘Business can take care of itself, but until the government adopts a sound economic policy there can be no sound business revival.’ ”  [Robert Wood Johnson: The Gentleman Rebel, by Lawrence G. Foster, p. 198]

Franklin Delano Roosevelt won the 1932 election in a landslide.  Before he took office, Johnson wrote him a long letter outlining a four-point proposal for economic recovery.   In that proposal Johnson stated that the nation had to learn to live within its means; that efforts should be made to increase the prices of commodities (which had plummeted); and that wages should be increased so that employees could purchase more, while hours should be decreased so that more people could be employed.  It was that last suggestion that focused the national spotlight on Robert Wood Johnson and Johnson & Johnson. 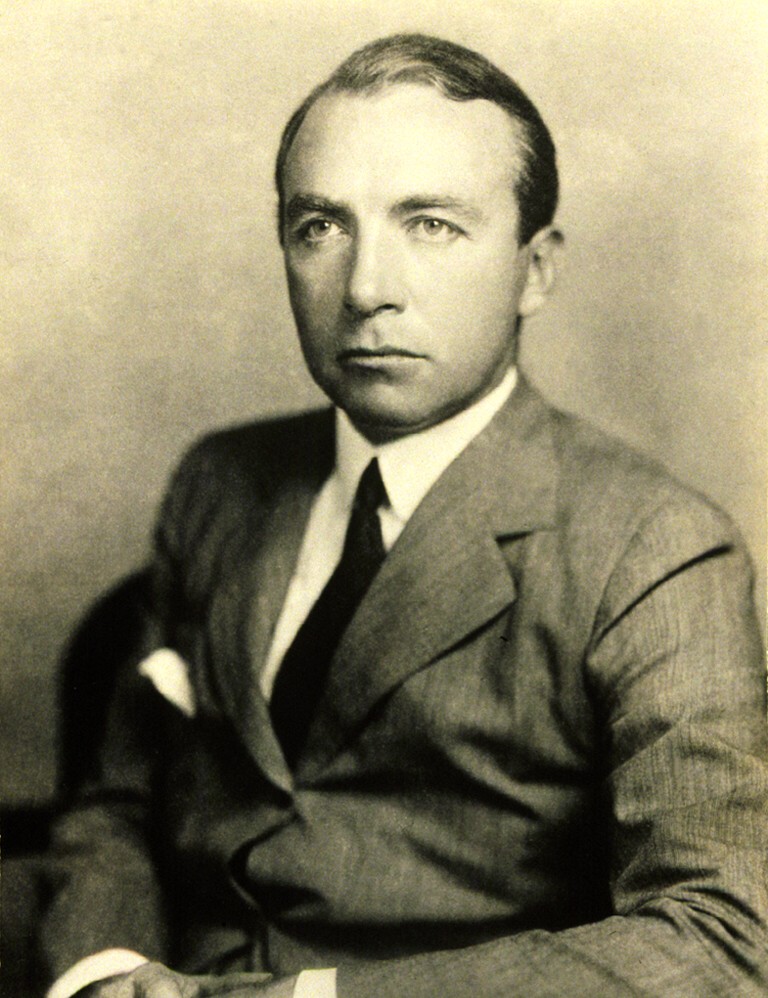 Johnson released copies of his letter to the press, to some elected officials, to corporate leaders and others.  The Associated Press ran a summary of his letter that generated newspaper headlines across the country.  Since the U.S. unemployment rate was then a staggering 25 percent, most of the articles focused on Johnson’s call for higher wages and shorter working hours.  The President’s office said that he would review the proposals, while business leaders across the country, many of whom were struggling to meet their payrolls, kept their heads down and stayed silent.

President Roosevelt’s first 100 days in office saw the start of the New Deal legislation to lift the country out of the Depression.  This included unemployment compensation for workers, federal insurance of bank deposits, regulation of the financial sector, food stamps, Social Security, mortgage refinancing, and federal standards for wages and hours, among other things.  In April of 1933, Robert Wood Johnson wrote another letter to Roosevelt, asking him to gather industry leaders and allow them to come up with a solution to the problems facing America’s businesses.  Johnson felt that the population’s severely reduced purchasing power was at the heart of the problem, and he thought that a 10 percent wage increase would help fix it.  Five weeks later, President Roosevelt announced a plan for bringing together agricultural and industry groups, and Robert Wood Johnson was appointed a member of the executive board of the newly created Drug Industry Institute of America.  One of the group’s first objectives was (not surprisingly) a wage increase, and Johnson announced that Johnson & Johnson would give a five percent increase to all employees.  The Company’s workers were overjoyed, but the same couldn’t be said for some of Johnson’s fellow industrialists – their reactions to his enlightened approach were far less positive. 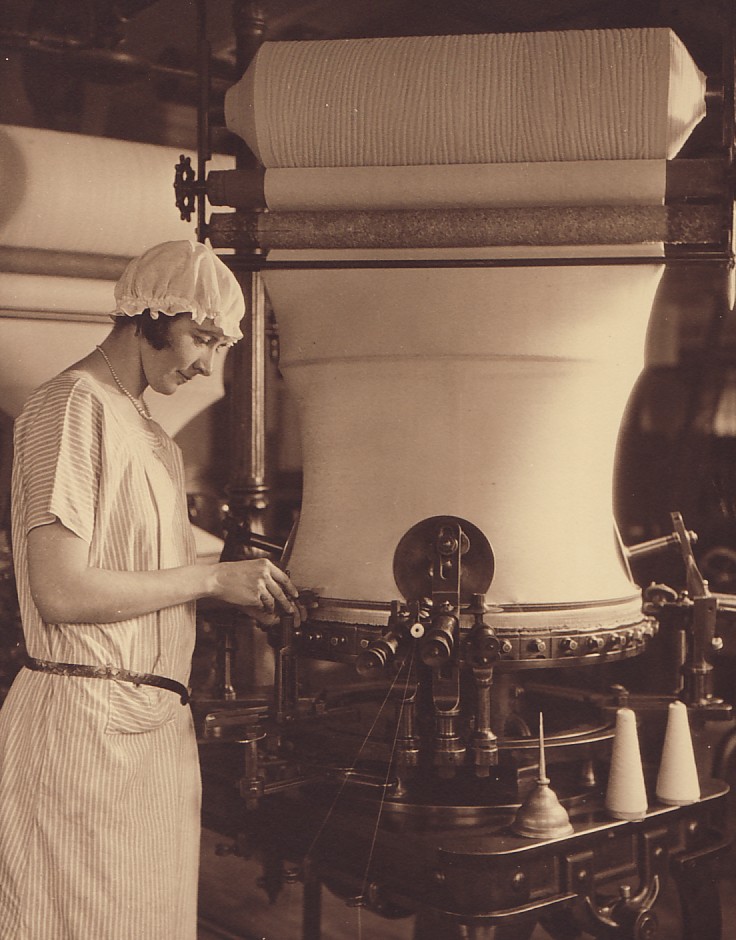 A Gauze Mill Employee, circa 1920s

The New Deal’s National Industrial Recovery Act included codes setting wages and hours for the textile industry, putting Johnson & Johnson at odds with government standards and with other textile operators (the Johnson & Johnson standards were higher).  The Company had owned the Chicopee Manufacturing Company since the days of World War I, and Johnson & Johnson was the world’s largest producer of surgical dressings, which were of course made out of textiles: gauze and cotton.  But Johnson & Johnson had higher wages and shorter hours than the new government standard, and complying with it would make it necessary to dismiss workers (as it turned out, the Company did not end up needing to dismiss anyone). 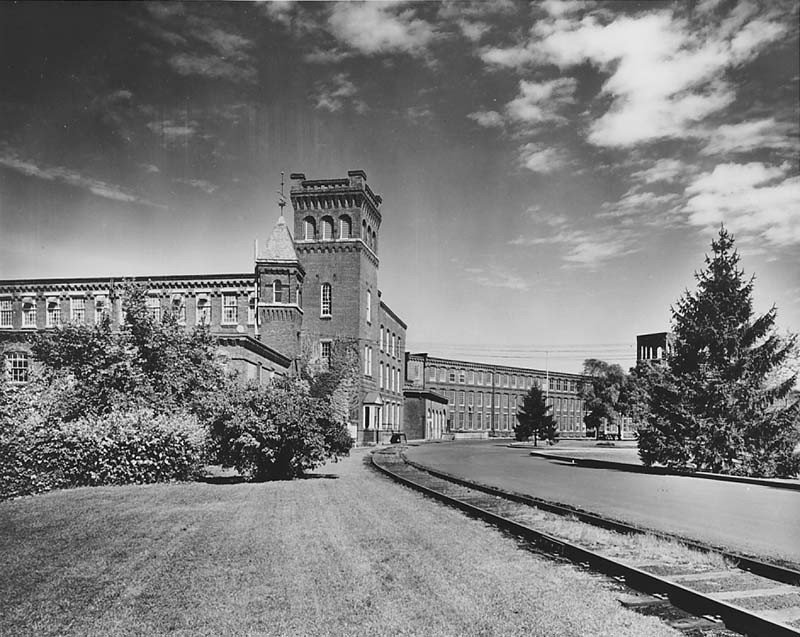 So Robert Wood Johnson went to Washington and met with Secretary of Labor Frances Perkins (the first female Cabinet member in U.S. history) and General Hugh Johnson, the head of the National Recovery Administration (or NRA, for short).  R. W. Johnson felt that the New Deal proposals on wages and hours didn’t go far enough.  He wrote:  “We should have a working day short enough to re-employ those who are unable to find work.  We should have minimum wages high enough for the people to buy what they produce.”  [Try Reality: A Discussion of Hours, Wages and The Industrial Future, by Robert Wood Johnson] Robert Wood Johnson even appealed to Congress and the U.S. Chamber of Commerce, but did not find any public support for his more progressive ideas.

Battle of the General Johnsons

The future General Robert Wood Johnson and the retired General Hugh Johnson would battle over this issue for several years, with Robert Wood Johnson consistently advocating for higher wages and shorter hours – a 35-hour week as opposed to a 40-hour week, and a much higher minimum wage than the government was proposing.* General Hugh Johnson left the National Recovery Administration in 1934 and the NRA itself was dissolved the following year.  When Johnson left the NRA, he gave an interview saying that he was opposed to shorter workweeks because he thought it would increase the costs of goods.  The interview irked Robert Wood Johnson, who wrote him a letter saying:  “ ‘Your administration of NRA is one of the tragedies of the age and perhaps, due to poor execution of the principles behind that great institution, we have lost the opportunity of a century.’ ”  [Robert Wood Johnson: The Gentleman Rebel, by Lawrence G. Foster, p. 211] General Hugh Johnson became a newspaper columnist, from which position he took potshots at his nemesis Robert Wood Johnson – calling him “ ‘…about the biggest pain in the neck that the NRA encountered under the cotton textile code’ ”  – because Johnson continued to advocate for shorter hours and higher wages.  [Robert Wood Johnson: The Gentleman Rebel, p. 227] Needless to say, Robert Wood Johnson’s progressive views were not shared by many people at the time. 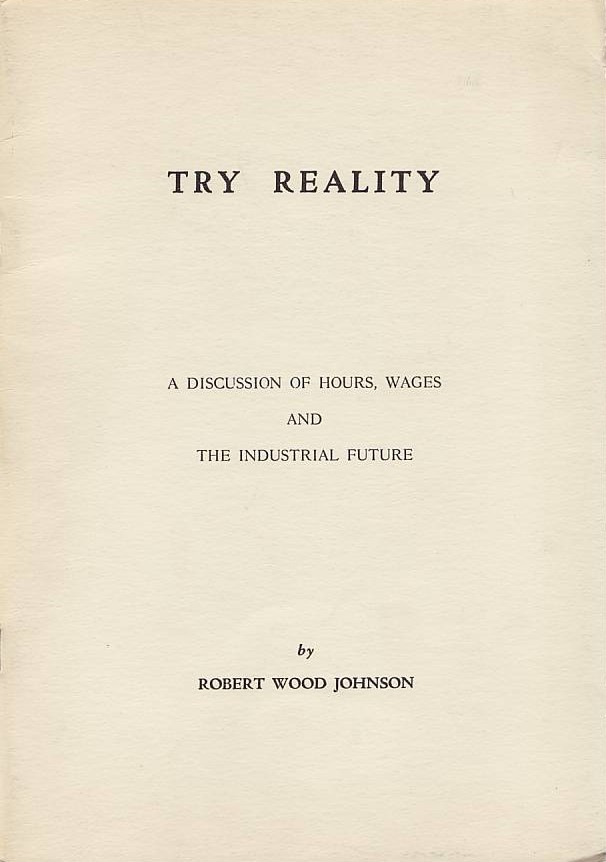 Johnson’s frustration at the unpopularity of his ideas about corporate social responsibility and how to help the nation overcome the Depression led him to write a pamphlet called Try Reality in 1935.  This pamphlet contained the seeds of an idea that would become the cornerstone of Johnson & Johnson:  Our Credo.

* Interestingly enough, the standard modern work week is officially 40 hours as a legacy of New Deal legislation.  If Robert Wood Johnson’s ideas had won out, our standard work week might be 35 hours.