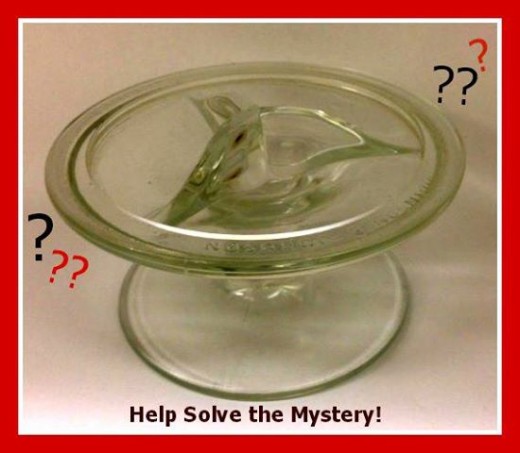 Several posts ago, readers were introduced to a mysterious mystery item from Johnson & Johnson history. In fact, it was so mysterious that it even stumped the Company historian and the alert readers of this blog. But now the mystery has been solved. What is the mystery item? Read on to find out!

As readers will remember, the mysterious mystery item was donated by a Johnson & Johnson employee who’s a huge fan of J&J history and who has an extensive personal collection of our historical products and artifacts. The employee who donated the item had never seen anything like it before. The item is heavy, clear glass, a little under five inches in diameter around the top part, and is a little over 2 ½ inches tall. It’s clearly functional rather than decorative, so it was something used in a professional setting. An educated guess based on its appearance and the style of the Company’s name and address embossed on the top put it in the range of 1920s-1930s. The object has a raised, three-part divider in the center of the top section, and an etched lip on the underside of the perimeter of the top.

By far the most creative guess from multiple readers was that it’s the world’s smallest cake, cupcake or cookie plate. (It isn’t...although it might look very nice piled high with miniature cupcakes!) A few other folks thought it looked similar to a pickle dish or relish tray because of the three-part divider on the top section. One of the most intriguing and plausible ideas from J.D. and a few others on our Facebook page was that it was a pill separator or an item used in a compounding pharmacy to mix medication. P.D., a very thoughtful Johnson & Johnson Family of Companies employee, thought it might have been a glass mold for a rubber or latex object. A.S., a senior scientist from one of our operating companies, had a very interesting suggestion: the mystery item was the top of something used in sterile manufacturing, and the etched edge was part of a glass-on-glass seal that connected it as part of a larger item. She said:

“The etching reminds me of organic chemistry lab when fitting glassware together. The etched parts were the connection points and typically a Vaseline-like substance was used to maintain a seal joining the glass pieces. I think the rest of the item is missing- probably a round jar with three sections. Might have held sterile swabs of different sizes?”

As it turns out, A.S. was indeed the closest. The object WAS part of a larger glass container, and it did have to do with something made under sterile manufacturing conditions: sterile sutures.

It’s the lid to a Ligature Storing Jar. Here’s what the 1936 catalog says:

“The Ligature Storing Jar has been designed to hold four dozen tubes – one dozen in each compartment. There are four compartments, thereby facilitating quick and accurate selection of the desired size. The Ligature Storing Jar keeps all tubes constantly submerged in the antiseptic solution by means of the glass disk which is part of the cover.” [Physicians’ Reference Catalog, Johnson & Johnson, New Brunswick, N.J., Chicago, IL, 1936, p. 27]

The base of the object that looks like a stand (the “glass disk” in the catalog description) was used to keep the suture or ligature tubes submerged in the antiseptic solution. The etched rim was indeed a glass-on-glass seal. And the three-part divider was a handle to facilitate lifting the lid to retrieve a glass tube of sterile ligatures.

The jar itself (which is the missing companion piece to our mystery object) is interesting, with “Johnson & Johnson Ligatures” on it and molded dividers on the bottom.  And since our Ligature Storing Jar lid has only the New Brunswick, NJ address on its embossed top, that would make it pre-1933.  After we opened our Chicago facilities in 1933, we included Chicago, IL after New Brunswick in our address.

A huge thank you to J.Z., who donated the mystery item, and to everyone who used their keen deductive skills and their love of a good mystery to contribute an answer. Congratulations to A.S., our scientist who used her scientific knowledge to come the closest to guessing the identity of the mystery object. Does anyone else have a mystery object from Johnson & Johnson history that they would like identified? If you do, submit your mystery object and its story to the blog and we will give our very alert and observant readers an opportunity to help solve another mystery.

Like Pawn Stars, like National Geographics series, this is a website that I more than look forward to see and read especially with this type of surprising articles. PLEASE, keep it going, and this article is worth the time. Thank you, love the history and mystery topics.

I'm not much of a history buff but it's great to read these stories about things from the past. Thanks.

Wow. I have been trying to figure out what my strange Johnson and Johnson jar was for years. Thanks to A Mystery Solved, now I know; a ligature storage jar. Thanks!