Here’s a quick quiz.  From the description of this Johnson & Johnson Family of Companies product, would the consumer using it be more likely to be listening to music on an MP3 player, or cranking up one of those old fashioned gramophones?  The product is a liquid bandage that’s applied with an applicator.  It forms a transparent, waterproof coating that keeps small wounds covered while they heal, and it won’t wash off with soap and water.

Any guesses?  Here’s the answer:  get that gramophone out of the museum, because the product was Cotolia Liquid Court Plaster and, 100 years ago, it was the BAND-AID® Brand SINGLE STEPTM  Liquid Bandage of its day. 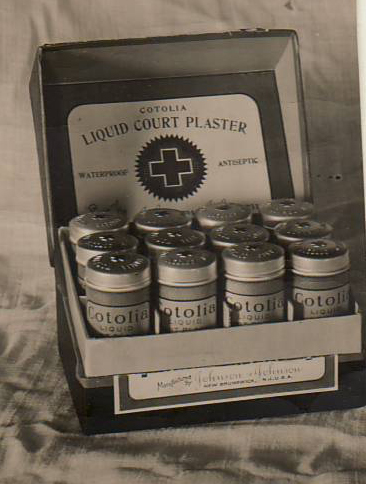 Strange, but true:  we made a liquid bandage 100 years ago.

Cotolia Liquid Court Plasters made their first appearance in our price lists in 1905, sixteen years before the invention of BAND-AID® Brand Adhesive Bandages.  Here’s what a 1907 edition of RED CROSS NOTES, our publication for doctors and surgeons, said about Cotolia.

“It forms a perfectly flexible coating upon the skin, which coating is transparent and waterproof.  The preparation contains an antiseptic, and therefore assists in healing the cuts, scratches and abrasions.  The bottles containing Cotolia are perfectly sealed to prevent evaporation, and instead of the ordinary brushes for the application of such plaster, Cotolia is put up with a glass spatula by which it is easily applied to the skin…”  [RED CROSS NOTES, Johnson & Johnson, Series V, No. 12, 1907, p. 282.] 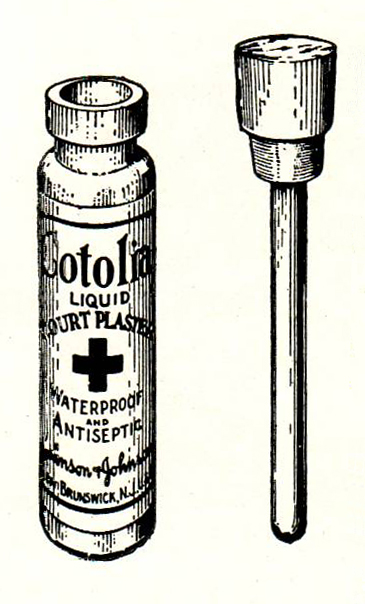 Cotolia Liquid Court Plaster came in glass bottles sealed with a cork, packaged inside a round aluminum tin for protection.  The glass applicator, which was deemed superior to the brushes used in competitor’s liquid court plasters, was attached to the inside end of the cork.

So what was a court plaster, anyway, and how did we come to make a liquid bandage around 100 years before we made a, well…liquid bandage?   Johnson & Johnson had been making court plasters since 1887.  They were small pieces of fabric with an adhesive on one side that were used to cover small blemishes, cuts or abrasions.

Court plasters owe their odd name to their origin in the royal courts of Europe, where they started out as a fashion item called beauty spots.  They were often made of silk or taffeta and came in a variety of colors.  At some point in their history, someone discovered that they could be used to hide blemishes or small cuts, and they became a popular consumer product, a cousin to medicated plasters.  They were made with more glamorous materials because, unlike a medicated plaster which was generally worn on an area covered by clothing, court plasters were worn on visible areas such as the hands.  Johnson & Johnson made court plasters out of taffeta, like this one: 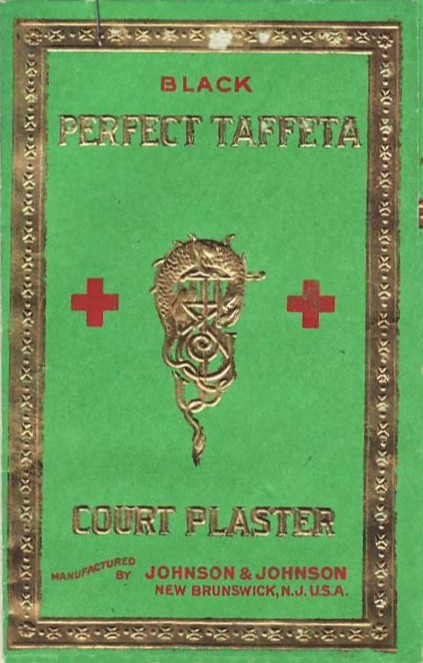 And we made court plasters with arnica, which was derived from a plant and used topically to treat aches, pains and inflammation from bruises and sprains. 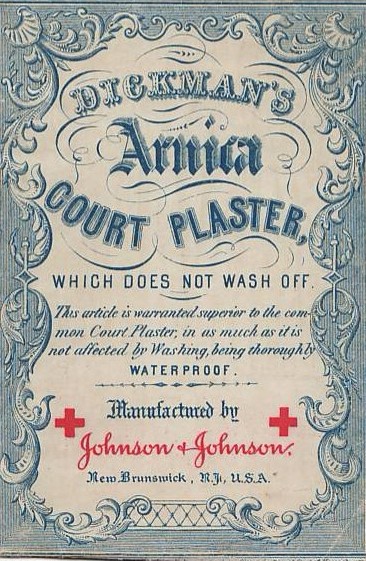 Arnica Court Plaster:  it was waterproof!

Liquid court plasters were designed to provide the same protection, but invisibly, and they were great for areas in which it was hard to get a court plaster to stay, such as hands and fingers.  Johnson & Johnson wasn’t the only company to make a liquid court plaster.  Here’s a 1910 ad for Carpenter’s Water-Proof Liquid Court Plaster, for example.   However, as Johnson & Johnson did with all of its products, it improved the safety, ingredients, method of working and method of delivery for Cotolia Liquid Court Plasters. 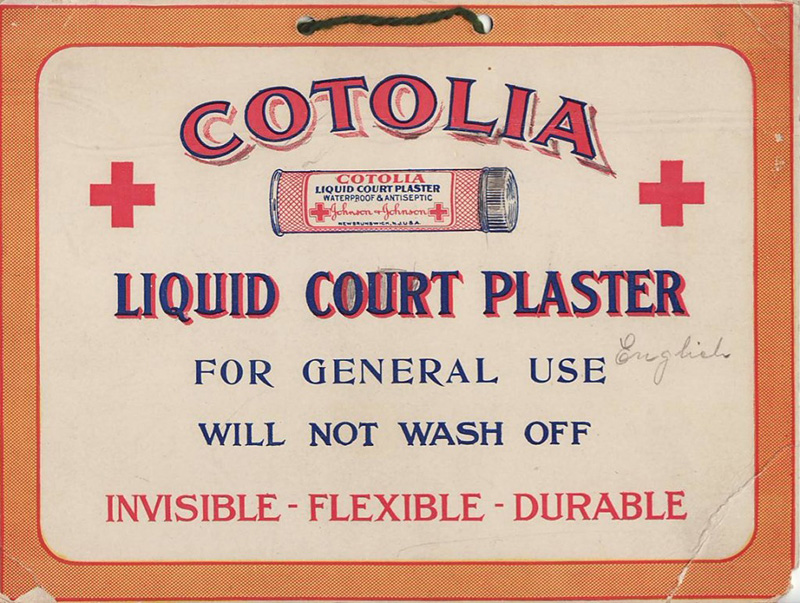 Today, the liquid court plasters of 100 years ago are largely forgotten, but their influence lives on: whenever you watch a film or wear a synthetic material, you owe an accidental debt to these forgotten products, because they inadvertently led to two inventions that would help shape the 20th century:  celluloid and rayon.  This site tells the story of how two scientists, one in Albany, New York and the other in Lyons, France, accidentally spilled bottles of liquid court plaster when trying to use it as a liquid bandage, and got the inspirational ideas that led to synthetic fabrics and celluloid film.

So, it’s strange, but true.  One hundred years before BAND-AID® Brand SINGLE STEPTM  Liquid Bandage, we made a liquid bandage.  And even though Cotolia Liquid Court Plaster and its competitors are long forgotten -- except by readers of this blog -- their influence is felt every day in the innovations they caused that changed modern life.

Margaret, This is a FANTASTIC STORY!! Our company never ceases to amaze me, with its spirit of innovation and creativity, that was there right from the start!! Thanks again for a great post, Marcia

This is a fun story....that also speaks to J&J's innovations. I would like to know why the Cotolia Liquid Court Plaster did not stay on the market. Was J&J just too far ahead of its time?! Great article!

Wow, as an employee, I never knew this site existed. Incredibly interesting and informative. I took a tour (with Margaret I believe) of the museum a few years ago and it was awesome. Thanks for all of your hard work and passion.

I just wanted to let you know that I have just finished reading all of the blogs on here and found everything so informative and extremely interesting! It really makes me appreciate J&J so much more, knowing everything about the company! Thanks for doing these, and I'm looking forward to this month's new blog :)

I just wanted to let you know that I just finished reading all of the blogs on this site, and have enjoyed it thoroughly! I have found everything I have read so informative and extremely interesting. It makes me appreciate J&J so much more, knowing all the history. Thanks for keeping up with this, and I'm looking forward to your next blog :)

I was watching Emma (with Gweneth Paltrow) and the Harriet caracter mentions court plaster. Well I had never heard of such a thing so naturally I googled it and I found my trusted friends at J&J had the answer I was looking for. Thanks!

In reply to by Amanda

Amanda, I'm glad we were able to help with the answer! Emma is a great film, and now I will definitely have to re-watch it to see the reference to court plaster.