Throughout its history, Johnson & Johnson has been known for developing and making products in response to needs in society…such as the first commercially available sterile surgical dressings.  Occasionally, though, the Company produced a product that helped fill a more unusual need in society.  One early product filled not a health care need, but a fashion craze.  And that product was…Beauty Spots. 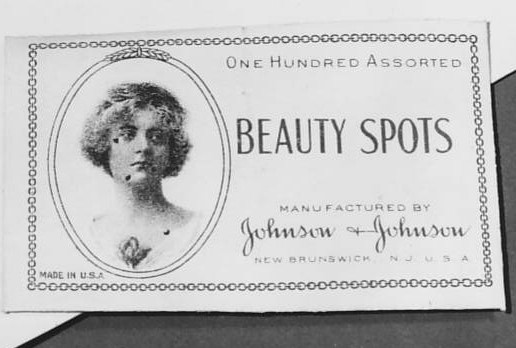 Beauty Spots were small pieces of material – usually black silk or sometimes velvet – with adhesive on the back.  They were most commonly shaped like small stars, crescents, arrows, hearts or circles.  Beauty Spots were used by women to attract attention to the complexion or an outstanding facial feature, such as the eyes, mouth, or a dimple.  They would stick the product on their faces near whatever facial feature they wanted to accentuate.  Occasionally, according to sources, women would use a number of them at once, which gave them the unfortunate appearance of having broken out in oddly shaped spots. 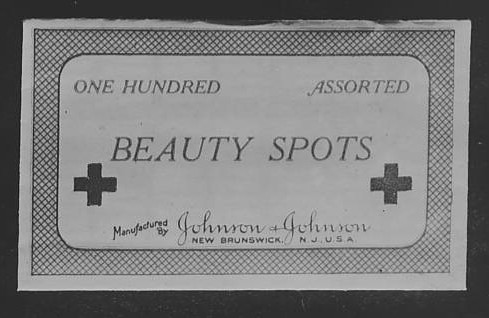 “To supply the demand created by this fashion we have arranged an assortment of designs consisting of stars, crescents, arrow points, hearts, etc., which are put up in envelopes, each containing 100 spots (3 dozen on a card); also in fancy boxes containing 300 assorted.”  [RED CROSS MESSENGER p. 286, March 1915, Vol. VII, No. 10.]

It was typical of Johnson & Johnson that, rather than just putting the product on the market (where it was bought by fashion-conscious women), the people at the Company felt the need to provide some education and background about its Beauty Spots.  So Fred Kilmer wrote about them in the March, 1915 issue of THE RED CROSS MESSENGER, the Johnson & Johnson publication for the retail druggists who sold our products.

According to Fred Kilmer, Beauty Spots were worn in Ancient Rome and Egypt, and there was a beauty spot fad in 17th century France during the reign of Louis XIII, and in England during the reign of Queen Anne.  Kilmer included an illustration from an old treatise on Beauty Spots (shown below) that shows someone wearing a number of them at once, including an elaborate horse-drawn carriage running entirely across her forehead! 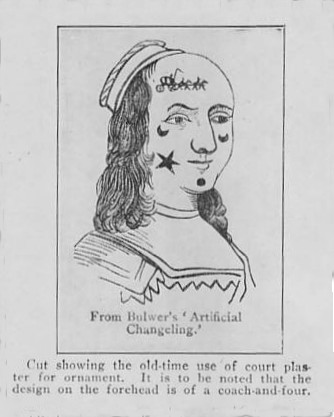 Johnson & Johnson made Beauty Spots out of materials left over from making plasters.  Since 1887, Johnson & Johnson had been making Court Plasters, which had the same origins but were the more practical cousin to Beauty Spots.  To confuse matters, Beauty Spots were sometimes referred to as Court Plasters, a name that goes back to their origins in the royal courts of Europe.  They had been used by court women, who set the fashions in their day.  According to Fred Kilmer, Court Plasters started out as fashion statements, before being used by the masses to cover small cuts and scratches.

Court Plasters were small and adhesive, and came in little pocket-sized sheets that could be cut to size to cover up a small scrape or cut.  They were made of luxurious materials like silk and taffeta, and came in a variety of colors.  (A tradition that was later continued by BAND-AID® Brand Adhesive Bandages!) 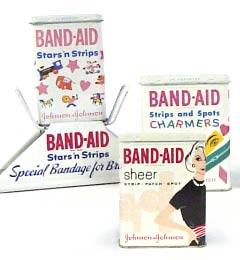 Oddly enough, the Company also made a liquid Court Plaster to put over small wounds, which sounds a lot like this modern product.  (You will need to scroll down to the second product on the page.) 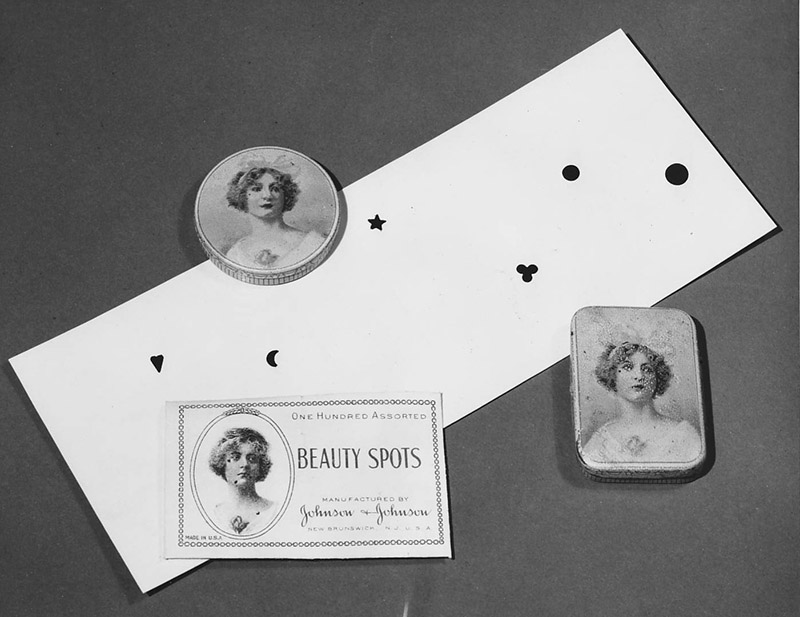 The Company provided educational background not just on its lifesaving products, but on its more unusual products as well, and Beauty Spots were no exception.  Why?  So that the druggists selling the products would understand them and be knowledgeable enough to answer the public’s questions.

Over 40 years ago I purchased one of these tiny tins at our local flea market. It is the exact one on the bottom right in the above photo. The colors are very vibrant and the Gibson style lady is beautiful. For years I have tried to obtain information regarding this tin. I took it with me to an antique show to have it apparised and one dealer offered me $800. for it, that was over 30 years ago. I even tried to contact Johnson & Johnson about it but never recieved a reply from them. My tin is in mint condition and still has some beauty spots in it. I was pleased to find it on your website. After all these years I finally have the information that I have been seeking. It is still a cherished part of my small collection and will always be my favorite. Thank you for the information.

In reply to by Linda Boney

How wonderful that you have a vintage Johnson & Johnson Beauty Spots tin! We have a few of them in our Museum, and they are quite lovely. I checked our archives, and Beauty Spots were first listed in our price lists in 1912, so that would be about the time Johnson & Johnson started selling them. So your tin could be as old as up to 99 years old. We made them through the 1920s; they are listed in our 1927 price list as well. Beauty Spots were tremendously popular during that era; as time went on, when they were no longer popular and there was no longer a demand for them, they were discontinued.

I hope that information is a useful addition to your knowledge about your Beauty Spots tin!

I would be courious to know the dates that J & J offered this product to the general public. The article mentions 1915 but I wonder if they were available prior to that date. I am trying to put an age on my tin. It's hard to believe that this lovely thing could be around 96 years old and still be in such wonderful condition.

Thank you Margaret for your quick response and the additional information. I found your sight very interesting and informative. Throughout my life I have used many of Johnson & Johnson's products and enjoyed learning more about the companies history.

I have a jar of Joncolia. It's a blue jar with a black lid. It has all the stickers on it and it's full. I know they used to put tubes of this burn emollient in first aid kits years ago, but I can't find any information on this jar. I did find a medical journal stating that this product was wonderful for severe radiation burns! This was my grandmothers and I know it dates back to the 30s. I would appreciate any information on this product. Thanks so much!

In reply to by MIchelle Yelen

Joncolia was a burn ointment that was included in our First Aid Kits in the 1930s. I will look through our archives to see what else I can find out about it, and let you know in the comments section to this post.

Thanks so much for this article! I found it by searching for information about "court plaster," which is mentioned in Louisa May Alcott's novel, An Old Fashioned Girl. One of the characters is prinking before the mirror, getting ready for an evening at the opera. She uses a slight, almost invisible scratch as an excuse to apply a beauty spot like the ones you describe. The novel was written in 1869, so someone must have been manufacturing them earlier than Johnson & Johnson.

Glad we could be of help in explaining court plasters! And how great that beauty spots make an appearance in a Louisa May Alcott novel! There definitely were people manufacturing beauty spots before Johnson & Johnson -- they had been around as a concept for a few hundred years. In the early 1900s they became popular again, and that's the timeframe in which Johnson & Johnson started making them.