Johnson & Johnson has been a pioneer in so many ways throughout its 130 year history – the first mass produced sterile surgical dressings and sutures, the first commercial first aid kits, BAND-AID® Brand Adhesive Bandages, lifesaving medicines, and so much more.  As a health care company, these pioneering firsts are dedicated to saving and improving lives.  But there is another very surprising area in which Johnson & Johnson was an unsung early pioneer:  cat pictures!

In the modern era, it is widely understood that cats rule the internet, with uncountable numbers of cute cat photos, cute cat videos and cat memes on websites and in people’s social media feeds.  The phenomenon of cats on the internet has even generated its fair share of scholarly attention, including this article that traces its history all the way back to 1998.  Early in 2016, the Museum of the Moving Image recognized the supremacy of cats on the internet with an exhibit called, not surprisingly, “How Cats Took Over the Internet.”

Johnson & Johnson has long recognized the power of popular culture.  In the 1890s, the company’s “Feels Good on the Back” ad went viral, running for an incredible 30 years unchanged due to consumer demand.  The ad was widely admired and imitated, with people dressing like the couple in the ad and having their pictures taken.  Even the U.S. Government did its own version of the ad image for a 1918 Liberty Loan campaign.  Since a meme is defined as a cultural element that is widely imitated and passed from person to person, you could say that Johnson & Johnson had a meme a century before the internet!  So it was only natural that at some point, the company would turn to cat pictures.

Like so many other traditions at Johnson & Johnson, this one was pioneered by Scientific Director Fred Kilmer. In addition to his duties as the company’s chief scientist, Kilmer also edited The RED CROSS® Messenger, our early publication for retail pharmacists.  The Kilmer family owned cats:  James, a tabby, Beauty, an all-white cat and Tom Rutgers, a black cat.  In 1914, a photo of Tom Rutgers found its way into an issue of The RED CROSS® Messenger to illustrate an article about the history of cats in pharmacies.   Here’s another photo of Tom in the more traditional “cute cat” pose.

Fred and Annie Kilmer were not the only cat owners at Johnson & Johnson.  Guess who else owned a cat?  General Robert Wood Johnson!

With a clear history of cat appreciation at Johnson & Johnson, it was inevitable that cats would claw their way into additional publications.   In the early 1940s, the BAND-AID® Brand ran an ad that featured an ill-tempered cartoon cat, but it wasn’t until 1950 that the company (to pardon the phrase) “purr-fected” its use of cat pictures.

In 1950, Ethicon Suture Laboratories, the operating unit formed from the company’s heritage sterile suture business, took this cat tradition to the next level:  they released a publication entirely dedicated to cute cat and kitten pictures – a sort of print forerunner to the internet, in that respect.

The ETHICON Cat-A-Log (get it?) was a collaboration with a group that has been a longtime partner of Johnson & Johnson:  nurses.  Ethicon Suture Laboratories supplied the cat pictures, and nurses wrote the captions.

So why did Ethicon Suture Laboratories publish an entire booklet of cute cat photos?  Why not!  Here’s what they said:

“Why an Ethicon Cat-A-Log?  This is an unblushing ‘me too’ booklet.  The current epidemic of picture books prompted us to get into the act with one of our own, relating to fields of mutual interest – nurses, doctors and their patients.  As to cats, we owe the name, at least, a salute….We hope that both ailurophiles and ailurophobes will enjoy this CAT-A-Log.”     [Ethicon Cat-A-Log, Ethicon Suture Laboratories, Inc., 1950.  From our archives.] 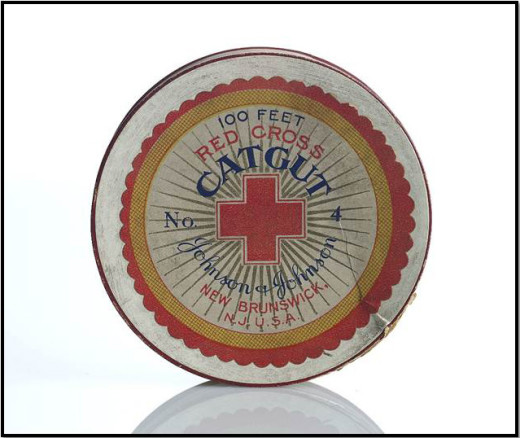 The cat aficionados at Ethicon Suture Laboratories went on to explain that the cute cat photos were a tribute to a type of suture, catgut, that was instituted by Sir Joseph Lister and that actually had nothing to do with cats.  It was a very old type of absorbable suture made from collagen.  (The name comes from an old Italian word, kitgut, which was most likely derived from the word kitara, the name of an old stringed musical instrument from which we get the modern word “guitar.”)  The captions in the ETHICON Cat-a-Log reflected the concerns – and sense of humor! – of nurses in 1950.

Today, uncounted numbers of employees at Johnson & Johnson and its operating companies worldwide share their lives with cats, so you never know when a cat might suddenly find its way into another Johnson & Johnson publication...like this blog.

LOVE! I'd share my cute cat pictures if there was a place to upload.

In reply to by Jessica Gilbert

I'd love my cats being influencers from JnJ!!!

Yet another reason to love J&J!!! Thanks for sharing such an interesting and delightful story!

Early Cheezburgers! Made my morning!

My guess is the lion feline statue in the background is at Morven.

In reply to My guess is the lion feline… by Anonymous

Your guess is absolutely correct! The statue was at Morven.