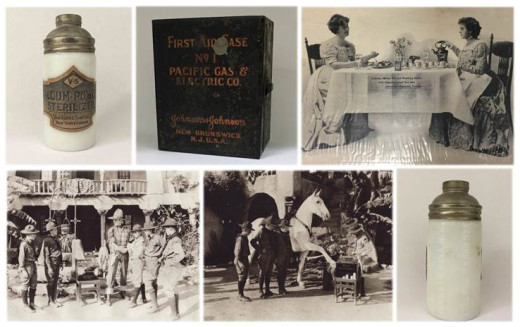 An historic key from the days of our founders. A one of a kind First Aid Kit with a one of a kind story. A Hollywood movie star from the 1920s demonstrating one of our heritage consumer products. It has been said that every picture tells a story, and that’s certainly true from the earliest photographs to today’s digital images. In the Johnson & Johnson archives, every object tells a story too. Here are five cool things from the Johnson & Johnson archives – each complete with a cool story that goes with them!

Antique skeleton keys are prized by collectors, and here’s an antique key that has special significance at Johnson & Johnson: it’s the key to the company’s first boardroom. That room was in the company’s first executive offices, part of a building built in 1896 that later was named Kilmer House in honor of scientific director Fred Kilmer.

Beginning in early days of the company’s history, the room unlocked by this key was the site of many (if you’ll pardon the pun) key decisions that shaped the future of Johnson & Johnson and changed the lives of the patients, families and communities we serve. Although the original boardroom and its surrounding building are part of history, the key was preserved and passed down by employees until it was donated to our archives by Johnson & Johnson retiree J.S.

This rare early Johnson & Johnson First Aid Kit was donated to our museum by C.R., along with its amazing story. Johnson & Johnson made the first First Aid Kits in 1888 to treat injured railroad workers, but by 1890 the demand was so great that the company was making kits for every need. This kit was made specifically for the Pacific Gas & Electric Company, but it never left New Jersey. Here’s its story: many decades ago, a New Brunswick resident named Mrs. P--- who lived on College Avenue needed a first aid kit. Two young men would park at the end of her block each day and walk to work at Johnson & Johnson, greeting her each morning on their way to work. One day, knowing that Johnson & Johnson made first aid kits, the woman asked the two young men if they could get her a kit from their workplace. Later that day or the very next day, they delivered the first aid kit to Mrs. P---.    The names of the two young men? Robert Wood Johnson and his younger brother Seward Johnson.

“The union of two such American firms – each proud of its reputation and the part it has played in promoting the quality and reliability of sterilized surgical dressings – will mean a great deal to thoughtful medical men, who realize the extent to which the successful practice of medicine and surgery depends today on the co-operation and good faith of the well-equipped manufacturer of medical and surgical supplies.” [RED CROSS® Notes, Series VII, Number Ten, Johnson & Johnson, New Brunswick, New Jersey, 1919, p. 248.]

This beautiful milk-glass container of Van Horn & Sawtell talcum powder, donated to our archives this year, is a rare example of some of the other products made by that company.

The rise of the half-tone printing process in the 1890s made photography a viable alternative to illustration in advertising, and Johnson & Johnson was quick to adopt that technological advance. Here’s an early ad for JOHNSON’S® Digestive Tablets using half-tone printing. It shows two women enjoying a rich, Victorian-era meal – including lobster, mince pie and pudding -- without worrying about indigestion, because they have digestive tablets on the table between them. (Indigestion is not just a modern phenomenon – it was a huge issue in the late 1800s as well.) There are only two people at the table, but they are pouring four cups of coffee or tea. Perhaps they were expecting guests? From the look of the clothing, the ad most likely dates from the 1890s, the decade in which JOHNSON’S® Digestive Tablets were introduced.

Although it seems like celebrity spokespeople are a modern phenomenon, they actually date back many decades. Synol Soap, a Johnson & Johnson antiseptic soap, received celebrity endorsements by Broadway and Vaudeville stars during the 1910s. Here’s a photo of silent film cowboy star Fred Thompson demonstrating first aid techniques to a group of Boy Scouts in 1926 – using a Johnson & Johnson First Aid Kit. Billed as “the World’s Greatest Western Star,” Thompson was a World War I veteran who began his Hollywood career by filling in for an actor who failed to show up for a shoot. By 1926, he was ranked the number two box office star in Hollywood.

Not only did Thompson demonstrate first aid, even his horse Silver King got into the act. Here’s a photo from our archives of Thompson using Silver King to demonstrate proper bandaging techniques.

I had the honour to work for J&J Italy from July 72 to March 1980. I was the financial controller of the Italian branch. It was one of the most valuable experiences in my long working life. Thanks.

I have an old Johnson and Johnson round band-aid can that held 16 band-aids. The band-aids had mercurochome on them.The round can is 3 1/2 inches tall. Is the a collectable item?

In reply to by Marion Wehrenberg

Your round BAND-AID® Brand Adhesive Bandages tin is from the 1930s. Compared to some of the other iconic packaging, the round cardboard can with the metal top is pretty rare, so it would be collectable.

My grandfather worked for the railroad and I grew up in the 70's with the metal first aid kits, ours had the little safety pins, a triangular bandage or 2, a foldable mesh splint and all kinds of goodies in these sterile little packages. I replaced the last one when I was in nursing school in the 80's, my parents kept it on the boat and it got quite rusty, now I wish I'd have kept one.

Hi Margaret, I just purchased a J and J first aid case No.2 made for PG&E. It looks just like the case displayed on this page. It is in excellent condition with all the original contents. I found it at an estate sale so I would love to learn more about it. I would also be happy to share pictures.