Once considered one of the premiere contemporary fine artists in America, she is largely unknown today, although her works remain in the collections of museums that include New York’s Metropolitan Museum of Art and the Cleveland Museum of Art. She was a career woman and a pioneering working mother during the 1940s. But she’s perhaps best remembered today for her series of paintings that appeared in Johnson & Johnson ads during the 1940s and 1950s. Here’s a look at Gladys Rockmore Davis, the artist behind the classic Johnson & Johnson ads, and the development of that iconic campaign.

On March 21, 1949, LIFE Magazine carried the first in a series of full-page, full-color ads for Johnson & Johnson wound care products. The focal point of the ads were beautiful paintings of children, with the line “Mommy always says you’re safe when you use Johnson & Johnson.” The response from the public was immediate. They wanted to know who did the paintings in the ads, and where could they get reprints?

Gladys Rockmore Davis was born in New York City in 1901. She and her family moved to Canada and then back to the United States, settling in San Francisco and later in Chicago. From early childhood, Rockmore Davis felt compelled to draw. She reflected: “It was my good fortune in early childhood that instead of merely playing with dolls, I had also an irresistible impulse to draw them. As I grew older, but still a child, my interest in drawing became so consuming that my early memories hold at the exclusion of all else, the great urge to become an artist.” [Gladys Rockmore Davis, American Artists Group Monograph Number 10, by Gladys Rockmore Davis, published by the American Artists Group, Inc., New York, 1945, p. 1]

After graduating from the prestigious Art Institute of Chicago in 1920, Rockmore Davis found work as an advertising and fashion artist. But spending time in Europe, studying with the famous Art Students League in New York and with painter George Grosz, spurred Gladys Rockmore Davis to switch gears from commercial advertising to fine art. Her primary areas of interest were in capturing light and creating moods with paint and pastels. Children were a frequent subject of Davis’ work; she used her own children as models for many of her pieces -- including some of the paintings in the Johnson & Johnson ads. 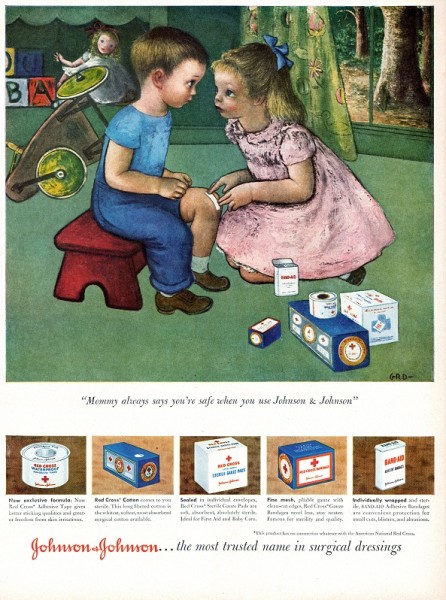 Gladys Rockmore Davis was part of an art world power couple, having married the illustrator Floyd MacMillan Davis in 1920. Davis’s illustrations appeared on the cover of The Saturday Evening Post, among other national magazines, along with his peers like Norman Rockwell. But with the decline of the era of advertising illustration, magazines turned to photography instead, and Gladys Rockmore Davis turned from fine art back to commercial art to support her family.

Davis took a break from her painting in the 1940s to undertake the sometimes dangerous assignment as a European war correspondent with her husband. The July 16, 1945 edition of LIFE Magazine featured their reporting and their artwork. Rockmore Davis’s illustrations were done in her very recognizable style, but showed a very different and somber subject matter.

In the late 1940s, just as Gladys Rockmore Davis was turning back to illustration, Johnson & Johnson was putting together an ad campaign for its line of wound care products. The ads would have large, colorful “human interest” illustrations to give meaning to the “Mommy always says you’re safe…” theme of the ad campaign. The illustrations would tell the story of a situation that would be helped by our wound care products, and the ads would have the famous Johnson & Johnson “The most trusted name…” slogan at the bottom.

Some of the top commercial illustrators in the United States were asked to interpret the campaign theme, and the results were – as you might expect – excellent. But something was missing: “…it was felt that none of the original artists succeeded in capturing the complete warmth and tenderness conveyed by the campaign theme…” [“The Story Behind the Greatest Advertising Campaign in the History of Surgical Dressings,” typewritten history of the Gladys Rockmore Davis ad campaign, Johnson & Johnson archives.] So in continuing its search for the perfect artist to illustrate the campaign, Johnson & Johnson turned from commercial art and began looking at the field of fine art.   The company commissioned Gladys Rockmore Davis and told her to interpret the theme of the campaign in her own way. The result was a distinctive series of twelve paintings.

Johnson & Johnson did some market research, surveying women (who were the primary purchasers of products to care for their families). They preferred the Gladys Rockmore Davis fine art illustrations two to one over the more conventional work of the illustrators.

The beautiful paintings in the ads immediately connected with the public. (Davis did commissioned works for other companies’ ad campaigns as well, but her Johnson & Johnson ads have remained the most popular of her advertising work.) It was one of the first times the work of a major fine artist was used in advertising, and another example of the innovative thinking behind the Johnson & Johnson ad campaigns. The ads appeared in the publications with the greatest reach: LIFE Magazine and The Saturday Evening Post. 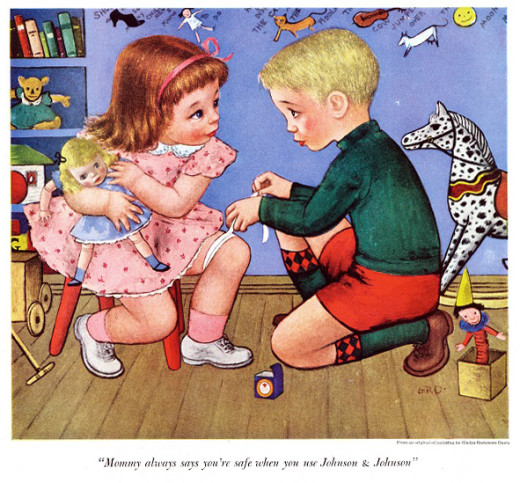 The focus of the paintings is caring. Each painting shows a pair of children, with one child using our first aid and wound care products to care for and comfort the other child. The caring, rather than the products, took center stage in the artwork: the children using them are the focus, and the products facilitate the care that’s taking place in each scene. If the paintings seem very personal, they were: Davis used her young son and daughter as models for some of the paintings.

The Gladys Rockmore Davis ads proved to be immensely popular (the foremost marketing research firm of the era declared that the ads with her illustrations were twice as effective as ads without them) and, having received many thousands of requests, Johnson & Johnson made them available to the public as prints. The ads and reprints graced the walls of homes, pharmacies, hospitals, doctor’s offices and clinics. Decades later, many of the original paintings hang on the walls at Johnson & Johnson, a vivid reminder of a classic American artist and the company’s history of innovation in advertising.

By the way, the boy with the dark hair in the wound care ad above (Davis’s son was the model for this painting) grew up to be an acclaimed artist himself, who is best known for his portraits of jazz musicians in Preservation Hall, New Orleans.

Margaret, thank you for sharing the story of Gladys Rockmore Davis with the public. I am proud to have two of her originals hanging in my office here in Johnson Hall.

In reply to by lois Sizemore

How great that you have a Gladys Rockmore Davis lithograph! We don't have any information at Johnson & Johnson regarding the value of your artwork; you would need to check with sources in the art world.

At least I think it's a lithograph, it belonged to my late grandmother whom
ordered it from Ladies Farm Journal.