April, 1887: The Johnson & Johnson Tradition of Helping the Community

Giving back to the community is one of the oldest traditions at Johnson & Johnson.  It began in the company’s hometown of New Brunswick, New Jersey, and spread throughout the world as Johnson & Johnson expanded globally.  Our earliest records of helping the community previously have dated back to the 1898 donation of dressings to treat wounded soldiers, disaster relief after the Galveston Flood of 1900 and help for the citizens of San Francisco after the San Francisco Earthquake of 1906.  But now that legacy of giving can be traced back much further:  to the spring of 1887 when Johnson & Johnson was a brand new company just celebrating its first year in existence.

In the early months of 1887, Johnson & Johnson was a fledgling company, just a year old.  James Wood Johnson’s historic train ride to New Brunswick had happened in January of 1886.  In March of that year, The New Brunswick Times mentioned that a new company named Johnson & Johnson would be setting up operations in the city.  In May, the newspaper carried an article saying that James Wood Johnson and Edward Mead Johnson were still getting the business ready.  In September, the progress of the tiny young company accelerated when Robert Wood Johnson published a letter to the health care industry stating that he would be joining his brothers at Johnson & Johnson.

The arrival of Robert Wood Johnson brought his business expertise, industry connections and much-needed capital and, in the early spring of 1887, Johnson & Johnson was rapidly gaining its feet.  By April of 1887 the company occupied about 8,000 square feet in three buildings (the original 1886 building and two adjoining buildings), and had grown from its original 14 employees to a little more than 125 employees, according to an article in the Detroit Pharmaceutical Era.

“The factories of the house of Johnson & Johnson stand back from the depot of the Pennsylvania Railroad at New Brunswick, N.J., about 150 feet…In the neighborhood of 35,000 square feet of flooring are used in the manufacture of all the products of the firm, and over 125 men, boys and girls are given continual employment the year round.”  [Detroit Pharmaceutical Era, April, 1887, “The Manufacture of Medicinal Plasters.”  From the Johnson & Johnson archives.] 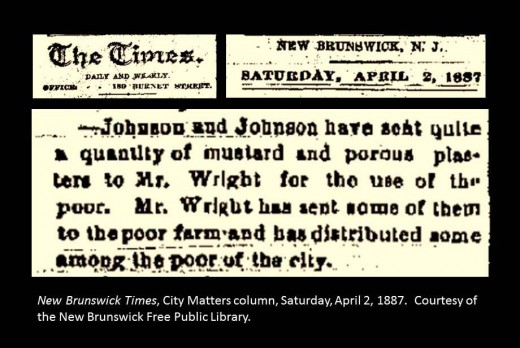 At the beginning of that same month – on April 2, 1887 – The New Brunswick Times noted that Johnson & Johnson donated “quite a quantity of mustard and porous plasters” for distribution to the underserved citizens of New Brunswick.  (Mustard plasters and porous plasters were two of the company’s earliest products – patches that delivered medication directly through the skin. A porous plaster was a medicated plaster that had small perforations running through its surface – like the holes in a modern BAND-AID® Brand Adhesive Bandage.  Mustard Plasters, as the name suggests, used compounds in mustard seed as their active ingredient.)

The brief article about the donation appeared in the newspaper’s City Matters column, which covered a variety of short news items about New Brunswick, its businesses and its citizens.  The donation was distributed to underserved residents in the city and those who had to take refuge at the local poor farm.  During the 19th and early 20th centuries, poor farms and poor houses were residential facilities that people were required to go to if they were unable to support themselves.  On the farms, which were common in the United States in that era, able-bodied residents were expected to work. The citizens of New Brunswick who found themselves in that situation would have had the fewest resources and, coming out of a cold winter, the donated health care products would have made a huge impact.

Since the article appeared on April 2, the donation would have happened either at the end of March -- or perhaps on the first day of April, 1887, if the newspaper was quick in reporting it.  To put that date into perspective, Johnson & Johnson made its first recorded large scale product donation two months before the company issued its first professionally printed price list, and seven months before Johnson & Johnson was incorporated. (The company was a partnership before its incorporation.)

This shows that giving back to the community has been a part of the very fabric of Johnson & Johnson since its earliest days.  Although the words “We are responsible to the communities in which we live and work and to the world community as well” would not be written until 1943, Johnson & Johnson was already taking that responsibility seriously in 1887 – 56 years before the writing of Our Credo.

This is so very interesting, thanks for tracing the J&J tradition of giving back way, way back!

Margaret, thank you for your ongoing efforts to share these fascinating bits of J&J and New Brunswick history.

In 1953 I attended New Brunswick High school while my mother was employed with Johnson & Johnson. My father was stationed at Camp Kilmer.
Your story and facts bring bring back many fond memories. Thank you.