More Cool Things from Our Museum Call for Artifacts! 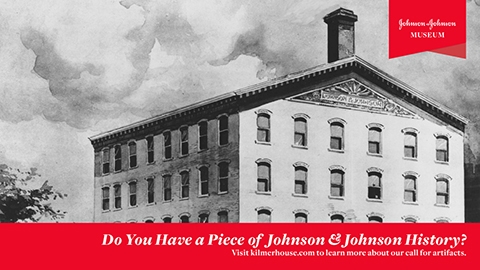 Our public call for artifacts for our Museum restoration is a few weeks old and, so far, Kilmer House readers have seen two of the coolest items – a Zonweiss clock and a Lister’s Fumigator – that have come back to Johnson & Johnson from employees and members of the public.  Thanks to everyone who has answered the call so far!  The artifacts and stories keep coming in, and they continue to amaze.  Here are some more cool things from our artifacts drive.

1.  A brick!  But not just any brick – this one is from Kilmer House, an historical Johnson & Johnson building that shares a name with this blog.  Built circa 1896 -- when Johnson & Johnson was only a decade old -- Kilmer House originally housed the Company’s offices and shipping department, but later grew to encompass, storage, packaging and even some manufacturing.  The building eventually was named in honor of Fred Kilmer.  During the building's tenure (from 1896 to 1993), Johnson & Johnson grew from a small medical products firm to a global healthcare company.  If you want to know where Company founders Robert Wood Johnson and James Wood Johnson had their offices, they were in Kilmer House.  How about General Robert Wood Johnson’s office?  In Kilmer House as well.

5.  L.T. shared the amazing story that every generation of her family has worked for Johnson & Johnson since the company’s founding in 1886, and that one of them worked directly for James Wood Johnson.   Her family is descended from James Ware, the freight master for the Pennsylvania Railroad in New Brunswick, to whom James Wood Johnson wrote Johnson & Johnson’s first check in March of 1886.  Ware left the railroad and came to work for the Company and, 128 years later, two of his descendants continue their family tradition of working at Johnson & Johnson.

6.  S.W. contributed some glass containers of historical Ethicon sutures that were donated by a retired product engineer, a reminder of the Company’s legacy in making surgery sterile.  Sterile sutures remain one of the oldest continuous product lines in the Johnson & Johnson Family of Companies, dating back to 1887.

8.  And just in from employee S.D., this beautiful glass TYLENOL® physician’s sample bottle from circa 1978.

Our call for artifacts and stories continues, so if anyone has a Johnson & Johnson artifact you would like to donate or a story that you or your family have passed down, please let us know by emailing us at artifacts@its.jnj.com.  Here’s more information about our call for artifacts as we restore our Museum.

Margaret,
This latest article came out exactly on my 40th Anniversary with J&J, all at ETHICON Somerville (R&D). I am fascinated with your postings, your descriptions, and the pictures; all done with great storytelling skill.

I am glad that you take great pride in our company, as do I.

Hi Margaret,
I've been sharing my love for and knowledge of J&J history with the Ethicon facility in Albuquerque, NM where I am currently employed. I have 9 artifacts in my collection with the original "double J" logo - from mustard plaster tins to boxes of cotton. I was curious as to how this logo came into being and the meaning behind it. Is there a symbolic reference to an arrow going through each "J" and what do the Holly branches represent? How long was this logo used and why did they discontinue it? I also have a very old and very fragile box of cotton that has what looks like a copy of James Wood Johnson's signature. I know the J&J logo was modeled after his signature but I noticed that the 2 "Johnsons" on my box were not identical. Is this an example of an even earlier artifact?

In reply to by Tim Daniels

Wow – it sounds like you have a fabulous collection of very early Johnson & Johnson products! And I'm so glad to hear you've been sharing your love for and knowledge of Johnson & Johnson history with your colleagues! The two “J”s in the very early logo represented James Wood Johnson and Edward Mead Johnson – two of our three founders. James and Edward started Johnson & Johnson as a partnership in 1886, and Robert Wood Johnson joined a few months later. The double J logo was used for about two years -- it's a feature of products from 188- to 1888. Your cotton box also sounds very old, but in order to give you more information, I would need to see what it looks like. Can you send a photo through the blog’s email? Kilmerhouse@its.jnj.com

I have a wooden first aid kit that says it is a war container. It is Kit 20

Is this WWII? era?

In reply to by Al Pondillo

Without seeing a picture of the kit it's hard to tell. Can you send me some photos of the kit through the blog's email? The address is: kilmerhouse@its.jnj.com I will be happy to take a look at them and give you more information about your first aid kit.