General Robert Wood Johnson, the author of Our Credo, had tremendous respect for the dignity and merit of Johnson & Johnson employees at every level of the organization. In or around the 1930s (at our best estimate), he sponsored a very special project:  the creation of a set of beautiful stained glass windows representing the different types of work done at Johnson & Johnson.  The windows featured actual employees, and one of those windows allows us to meet one of the Company’s most remarkable early employees face-to-face: one of our women employees from 1886, the year we were founded.

The windows, four of which are in the collection of the Wolfsonian Museum in Miami, Florida, originally may have been twelve in number.  They represented a wide range of work at Johnson & Johnson, ranging from mill hands to machinists to lab workers to supervisors to office workers.  Employees were specially selected to model for the windows, and it was a great honor to be chosen.  According to oral histories --  our only source of information besides the windows themselves -- the windows either were part of a building that housed the company’s human resources department, or they were in a corridor connecting that department with the rest of the offices. 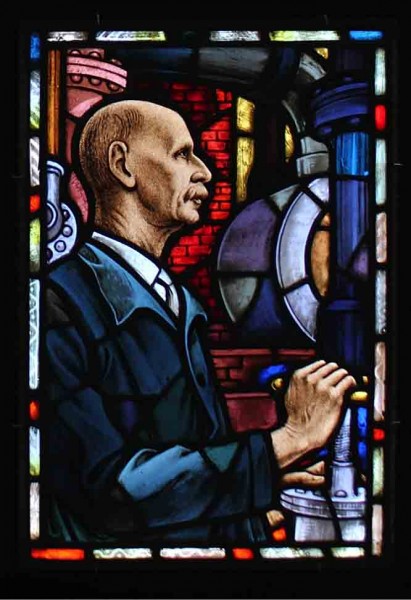 The rich, jewel tones of the stained glass give the employee portraits a tremendous reverence and dignity and, with the light shining through them, they would have been truly magnificent.  They were a tangible reminder of the centrality of employees to everything being accomplished by Johnson & Johnson, from the first mass produced sterile surgical dressings to the invention of new products, to our employees’ work in the community.   The windows were also a tremendous source of pride to the employees chosen to represent the Company.  Here’s what the daughter of one of those employees said:

“My father…worked in the paint department…and then he was one of the twelve or so J&J employees who were selected for a special project of General Robert Johnson, to display stained glass likenesses of representative persons of the various departments at J&J.  So my father represented the mechanical department…Those portraits were prepared first by taking a photograph of the worker, and then the photograph became an oil painting and finally the resulting product was the stained glass portrait.  They were on display in the employment office, and I know my father took great pride in showing that to us on one of the open house tours of J&J.”  [Transcript of Yolan V-- video interview conducted by Johnson & Johnson, 2003]

Years later, when the building was taken down, General Robert Wood Johnson had the windows carefully taken out, framed and given to the employees or to their families.  Descendants of those employees still display their windows proudly in their homes, and four of these beautiful windows recently joined the collection of the Wolfsonian Museum in Miami Beach, Florida.

The windows in the Wolfsonian collection were acquired in Miami, and they show four Johnson & Johnson employees: three men and one woman.  One of the men wears a shirt and tie and is shown in an office setting.  The other two men, Edward A--- and William P--- worked in a mill or manufacturing setting, as did the woman.  An empty glass jar to hold sterile dressings can be seen at her left.  The windows came with nameplates, and here’s where the additional surprise comes in:  the nameplate for the female Johnson & Johnson employee identifies her as Elizabeth P---, who joined Johnson & Johnson in 1886, the year we were founded.  Here, now, for the first time, readers can meet one of our original employees face-to-face:

Meet Elizabeth P---.  Born and raised in New Brunswick, Elizabeth joined Johnson & Johnson in July of 1886, just a few months after the company started operations and -- remarkably -- she was still at Johnson & Johnson in 1941.  In her window, she is shown representing the Label Department which, as readers might imagine, put the labels on our products.  Her face in the stained glass portrait reflects quiet dignity and pride in her work, and her remarkable at least 55-year career with the company made her an eyewitness to the birth and early history of Johnson & Johnson.

Elizabeth worked in our first building – the four-story former wallpaper factory.  She knew James Wood Johnson.  She witnessed Robert Wood Johnson’s whirlwind arrival at Johnson & Johnson in 1887, and she no doubt heard his favorite enthusiastic phrase of “it’s a go!” many times.  She knew Fred Kilmer.  She was there when we made our first sterile surgical dressings and sterile sutures. She witnessed the Company’s invention of the commercial First Aid Kit in 1888, the birth of JOHNSON’S® Baby Powder in 1894, and the invention of the BAND-AID® Brand Adhesive Bandage in 1920.  She saw our first international expansion from 1919 through the 1930s.  Elizabeth watched as the Company’s leadership transitioned from the first Robert Wood Johnson to James Wood Johnson, to Robert’s son – who she would  have seen grow up as he came to work with his father.  She was part of Johnson & Johnson as the world around her transformed from horses and buggies to automobiles to airplanes.  But there’s more to her story.

At a time when it was unusual for women to do so, Elizabeth P --- had a leadership role at Johnson & Johnson.  In 1908, Elizabeth was listed as part of the executive and superintending staff, as department supervisor for the Label Department, and she was one of the women listed in 1912 as part of the management and supervisory ranks.  In a February 10, 1910 article about Johnson & Johnson in the New Brunswick Times, she is listed as a head of department at the Company.

In 1908, Elizabeth was elected president of the Laurel Club, the first organization for women employees over 100 years ago, and she volunteered in the New Brunswick community.  One of the activities she was involved in was helping the city’s orphaned children.  Elizabeth was also trained in First Aid and in 1912 she was one of the Company’s team of employee first responders.

Decades later, the Johnson & Johnson Bulletin was the Company’s new employee publication, and the November 1, 1941 issue had a front-page story reporting that a dinner had been held in Elizabeth P---‘s honor to celebrate her remarkable 55–year tenure with Johnson & Johnson to that date.  Unfortunately, no one interviewed Elizabeth for the Bulletin, an incredible missed opportunity since, in 1941, she was the only employee remaining who had witnessed the birth of Johnson & Johnson.  (If any readers are considering inventing a time machine, doing that interview might be a good first outing for it.)

While we can’t interview Elizabeth P---, readers who find themselves in Miami can visit her stained glass portrait – and those of her colleagues – at the Wolfsonian Museum.  The Wolfsonian Museum is part of Florida International University, and is located at 1001 Washington Avenue Miami Beach, FL 33139 at the corner of 10th Street and Washington Avenue.  Since the Johnson & Johnson employee stained glass windows are not in the Museum’s public collection, anyone who’s in the Miami area and wishes to visit them can make arrangements by calling the museum at 305-535-2611 or by emailing Lea Nickless at lea@thewolf.fiu.edu.

And if any readers have a Johnson & Johnson employee stained glass window in their homes, I would love to see a picture of your window and hear the story behind it.

Thank you to the Wolfsonian Museum for sharing the Johnson & Johnson employee stained glass windows with us!

Great story - what beautiful artistry - love these blogs. It would be cool if we commissioned some new stained glass windows for the update of the Kilmer museum - we could think of a number of great candidates I am sure like Fred Kilmer, Dr Paul Janssen etc which would also link the J&J story to today and honour some of the more recent innovations that J&J has brought to the world.

What an amazing story! I can't wait until my next trip to Florida. I would love to see these! These would have been great for our anniversary or on a "tour" around J&J for all to see!

Very impressive. Thanks for sharing.