A Study in Cotton

Today we take pristine white cotton swabs, cotton balls and sterile cotton dressings for granted, but over 125 years ago it was a very different story.  Cotton in the 1800s was not very useful as a dressing, and you wouldn’t have wanted to use it as a personal care item.  The natural oils in the plant fibers made it non-absorbent and it was, as Fred Kilmer described it, (you may want to put down your coffee while reading this one)  “…yellow and dirty...it was put up in wads, packed in any sort of a box or wrapped in loose paper.”   [RED CROSS® Notes, Series II, No. 9, 1899.  Published by Johnson & Johnson, New Brunswick, NJ, Fred Kilmer, editor.  “Commercial Absorbent Cotton,” page 3.]

In fact, surgical texts of the day cautioned surgeons to make sure that the untreated, non-antiseptic cotton wool was free from particles of dirt, insects and other, er…things that blog readers would not want mentioned.  Kilmer noted that the cotton of that time was of little use to a surgeon and, in the more enlightened era of the 1890s to 1910s, it would be considered of no value at all.  “In fact if the material then in use had not been improved upon it would have never been of much value to the surgeon, and certainly would never have been found in such general use as we find is the case to-day.”  [RED CROSS® Notes, Series II, No. 9, 1899, published by Johnson & Johnson, New Brunswick, NJ, Fred Kilmer, editor, page 3, “Commercial Absorbent Cotton.”]

But before the late 1880s, surgeons used it anyway, due to a lack of alternatives.  And that’s where Johnson & Johnson stepped in.

Having pioneered mass produced sterile surgical dressings, Johnson & Johnson recognized the potential for sterile, white, absorbent cotton as a surgical and wound care product.  So in 1886--1887 the Company set out to make that happen, which improved the array of tools available to doctors and surgeons and gave cotton a new lease on life.  Here’s what Fred Kilmer said:

“Johnson & Johnson made the initial step by producing cotton that was white, clean and absorbent, but the greatest improvement of all was in or about the year 1886.  We invented a system of machinery by which cotton could be carded and rolled automatically with a layer of tissue paper between each layer of cotton, the object being to keep the several layers separate and apart for convenience in handling and use.  It proved of the greatest service to all consumers: cotton had never been prepared in this way before, and it opened the new era.” [RED CROSS® Notes, Series II, No. 9, 1899, published by Johnson & Johnson, New Brunswick, NJ, Fred Kilmer, editor, page 3, “Commercial Absorbent Cotton.”]

Beginning in 1899, Scientific Director Fred Kilmer began to document this work in a series of comprehensive articles in the Company’s scientific journal, RED CROSS® Notes.  He called these articles “A Study in Cotton.”

The "Study in Cotton" articles contained a lot of scientific information about cotton, and they also told the story of how Johnson & Johnson made cotton wool clean, white and absorbent for the first time.  The Company quickly developed large scale manufacturing innovations, such as a water filtration system that produced bacteriologically pure water to wash the cotton, new large scale industrial sterilization techniques, and – thanks to Company founder and talented engineer James Wood Johnson – machinery designed to automate the process so that large quantities of antiseptic sterile cotton products could be mass-produced.

Here’s how the process worked.  Raw cotton was delivered to Johnson & Johnson in New Brunswick.  The bales were weighed and selected, and each one was numbered.  Samples were taken and tested from each bale, and any that were not found up to grade were rejected and not made into sterile dressings or sterile rolled cotton.

Once approved, the cotton went through around 40 separate processes to wash and clean it, sterilize it, dry it and make it white and absorbent.  In its last stage, the cotton was rolled, wrapped in its familiar blue paper, and sealed into boxes.  In 1897, the Company’s daily capacity of absorbent cotton was 10,000 pounds.  [RED CROSS® Notes, No. 6, September 1897, Johnson & Johnson Laboratories, Fred Kilmer, editor, New Brunswick,, NJ  p. 2.]  Two decades later, with the acquisition of Chicopee Mills, that production output increased exponentially to meet the need to treat wounded soldiers during World War I.

The packages of sterile cotton were sealed, insuring that the contents stayed sterile until the package was opened.  The Company also began packaging it in sheets with a layer of blue tissue paper between them, which made it not only convenient to use but instantly recognizable. In fact, it made it so recognizable that other companies began copying it.  But Johnson & Johnson had made the decision not to patent these new developments in sterile, absorbent cotton so that they would be as widely available as possible to the medical profession, because of the great help it would be to surgeons and patients.  [RED CROSS® Notes, No. 4, August, 1897, Johnson & Johnson Laboratories, New Brunswick, NJ, Fred Kilmer, editor, p. 2]

Johnson & Johnson went on to further improve its own improvements in cotton by developing Lintine, which was absorbent cotton felted into thin sheets.  Lintine was even more absorbent than the sterile cotton wool, and could be cut into smaller sheets like a piece of cloth.  By World War I in the Nineteen Teens, Johnson & Johnson was known as the largest producer of sterile surgical dressings in the world, and RED CROSS® Cotton was in most medicine cabinets.

Today we take sterile, pristine cotton in its many forms for granted, but it took a lot of hard work to get to that point.  So the next time you’re using a fluffy white cotton ball, or a cotton swab, or a dressing, or even making a cotton ball snowman with your children, take a moment to appreciate the men and women who worked to change cotton from a grimy, non-absorbent, non-sterile mess to a sterile, pristine, absorbent mainstay of early surgery, of first aid since 1887, and of modern-day children’s crafts. 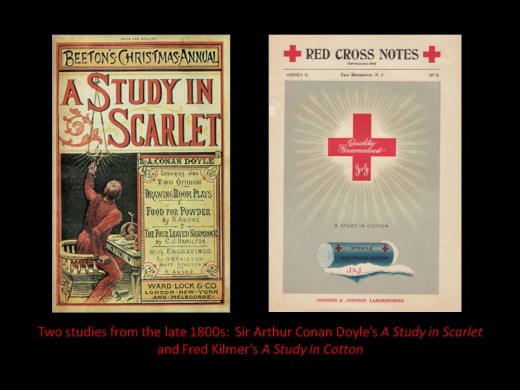 By the way, why did Fred Kilmer call his overview “A Study in Cotton?”  Shouldn’t it have been “A Study of  Cotton?”  (A similar pamphlet written by Kilmer and published by Johnson & Johnson in 1901 was titled “A Study of Adhesive Plaster.”)  One intriguing possibility is that the title of this Johnson & Johnson monograph may have been inspired by A Study in Scarlet, the novel by Sir Arthur Conan Doyle that first introduced Sherlock Holmes to the world.   As evidenced by his letters, Fred’s son Joyce Kilmer was a fan, and it’s likely his parents read the stories as well.  Since Fred Kilmer was, in some ways, the Dr. Watson of Johnson & Johnson’s early days, chronicling the Company’s pioneering work in sterile surgical products, industrial sterilization, absorbent cotton, first aid and more, it’s possible that the analogy occurred to him, and he may not have been able to resist the shout-out to Conan Doyle in his title.

(The public domain image of A Study in Scarlet above is courtesy of Wikimedia Commons, at this link.)

How cool that the company did not patent this so that its benefits could be leveraged more broadly in the interests of patient care - what a testimony to our ethos. Love these articles - keep them coming

My father started work around age 15 (1908) as an accounting clerk with J&J in New Brunswick, N.J. Within 10 years or so he was transferred North to Chicopee, MA and eventually became the "Agent" for the mill. Agent today would be called General Manager.

In reply to by Patrick O'Toole

Patrick, your father began his Johnson & Johnson career the same year that we opened the large addition to our Cotton Mill in New Brunswick. Before the machinery was installed, the Johnson brothers held a big party for employees in the Mill building to celebrate the Company's growth and everyone's hard work, so it's likely that your father attended that party! How great that he became the Agent for Chicopee Mills!

Every blog gets better Margaret :) this one is way up there.........Question: Who presently does the work that Mr Kilmer performed back then for us? Paul Stoffels?

Thanks -- I'm glad you liked the post! Paul Stoffels is our chief scientist -- which is the position that Fred Kilmer held during the earlier part of our history.

Speaking of cotton, has the blog ever covered the Chicopee facilities in the south? I've heard some provided major improvements in hygiene and lifestyle for employees vs. the local standard of living.

In reply to by Conrad Person

I haven't done a post specifically on Chicopee yet, but I definitely plan to do one in the future! Chicopee did indeed have major improvements in hygiene and lifestyle for its employees with Chicopee Village in Georggia. In addition to building the nation's first modern one-story textile mill in the 1920s, the Company also built houses for employees, which not only had underground power lines over 80 years ago, but were among the first homes in northeastern Georgia to have indoor plumbing, electricity and hot water -- lifechanging improvements for the employees who lived there.

Is it correct to assume that Fred's son was the poet?

In reply to by Jamie Oberst

Fred Kilmer's son was indeed the poet Joyce Kilmer, so Joyce is, by extension (and because he did some writing for our early publications), part of the J&J family.

I have a box of Lintine. the box is Blue with a label that has a white border, next a gold border with red crisscross red lines. The middle is green with One Ounce
Lintine
A substitute for
+ Absorbent + (two red cross)
Cotton and Lint
Prepared by Johnson & Johnson
Manufacturing chemists New Brunswick U.S.A.
any idea of the time frame that it was produced?