Zonweiss: the First Toothpaste in a Tube?

There's a popular saying that you can't put toothpaste back into a tube. But you CAN come up with the idea to put toothpaste into a tube, and do you know who was one of the first companies to do that? If you answered Johnson & Johnson, you would be correct! That toothpaste was Zonweiss, our first consumer product. Johnson & Johnson made it available for sale in collapsible metal tubes in 1889 - three and seven years before the oldest commonly accepted claims of 1892 and 1896 for that innovation. Here's the story.

The first ads for Zonweiss appeared in 1886, Johnson & Johnson's first year in business, and our 1887 price list includes Zonweiss tooth cream as the Company's first consumer product among the sterile surgical products and medicated plasters. Most teeth-cleaning products in 1886 were tooth powders: you had to dip a wet toothbrush into some tooth powder, or gently tap tooth powder onto your toothbrush (without accidentally tapping the container too hard and getting tooth powder all over the place) and then add water. As a tooth cream (roughly the same thing as toothpaste), Zonweiss eliminated that step and was a lot easier for consumers to use. It came in a cobalt-blue glass jar, with a tiny spoon for people to use in applying it to their toothbrushes -- to avoid the unsanitary practice of having multiple people dipping their toothbrushes into the same jar.

As a tooth cream, Zonweiss was already different, and the product further distinguished itself through advertising, and through the eye-catching Zonweiss clock, which was offered as a promotional item to retail pharmacists. 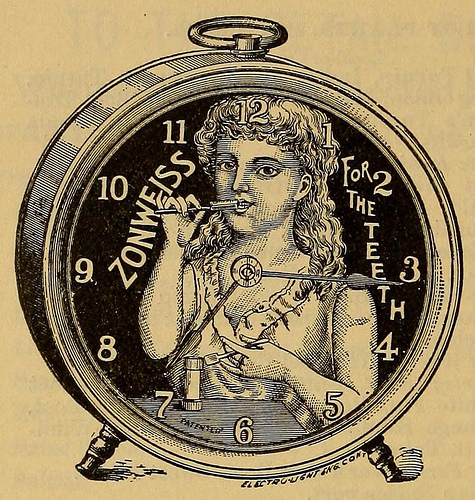 Illustration of a Zonweiss clock, courtesy of the Biomedical Ephemera blog. Note the spoon used to apply the product in the girl's hand! 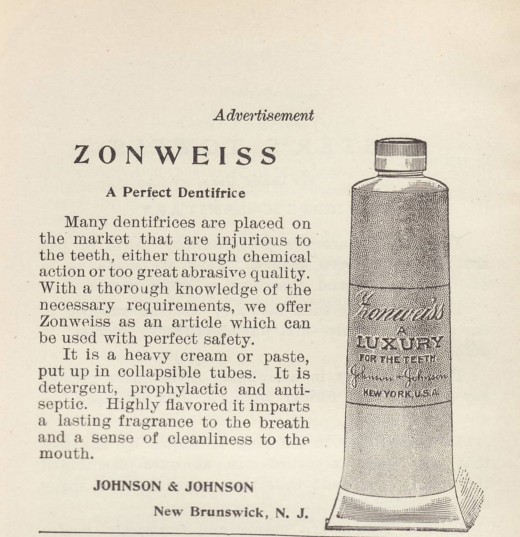 Zonweiss already stood out from other dental products, but in 1889 the Johnson brothers went a step further: seeing the potential, they used a packaging innovation not yet being used in health care products, and they offered Zonweiss for sale in collapsible metal tubes.

According to this website, collapsible metal tubes were first patented in the U.K. and in the U.S. back in 1841. They were originally used to hold artist's paint, making it easier for artists to travel with their art supplies and more easily do paintings on location in villages and fields. The Johnson brothers were innovators, and they seized on the idea of using collapsible tubes for Zonweiss, to give consumers more convenience and further ease of use.

There was a collapsible tube manufacturer in New Brunswick, New Jersey - The Consolidated Fruit Jar Manufacturing Company (despite its name, that company also made tins with shaker tops and collapsible tubes.) The Johnson brothers used them as their source -- Johnson & Johnson was already buying fruit jars from them to package sterile surgical gauze and dressings, because the fruit jars could be hermetically sealed to keep the contents sterile.

The Tube Council site has a history of the collapsible tube written in 1958, which mentions Johnson & Johnson as being an early adopter. Here's what they say:

"The third U.S. tube plant was the J. S. Turner White Metal Co. of New Brunswick, N.J. It was established in 1898 by John Stroud Turner, who still in his teens, emigrated to the United States from England. Turner learned the art of tube-making as an employee of the Consolidated Fruit Jar Co. When he set up his own business, the J. S. Turner White Metal Co. the assumption is that "white metal" referred to tin-it was in his own home. His first customer was Johnson & Johnson, located in the same city" [The Irrepressible Collapsible Metal Tube, by George A. Stauter, from American Perfumer & Aromatics, December, 1958, courtesy of The Tube Council at this site: http://www.tube.org/files/public/Council_History.pdf ]

Starting in 1898, Zonweiss was packaged only in tubes -- no more glass jars -- and when JOHNSON'S® Shaving Cream Soap was introduced in the next decade, it too was packaged in collapsible metal tubes. At the start of the 1920s, Zonweiss was phased out in favor of JOHNSON'S® Tooth Paste, still in a collapsible metal tube...but Johnson & Johnson was about to take that a step further.

In 1921, Company founder and engineer James Wood Johnson redesigned the cap of the toothpaste and shaving cream tubes from being a flat screw-on top to a screw-on top with an ornamental pointed cap that would be used to open the sealed mouth of the tube. 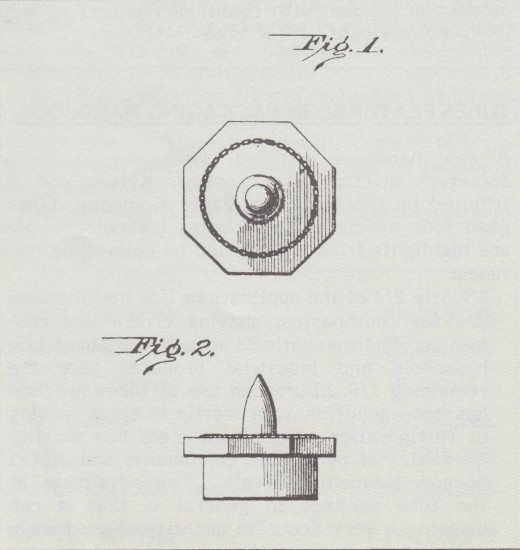 Johnson received a patent for his design and, years later, he was recognized for his contribution by the Metal Tube Packaging Council in an article in their newsletter.

Today, many products packaged in collapsible metal tubes still use some form of James Wood Johnson's innovation. And although today's toothpaste tubes are no longer made of metal, when you squeeze toothpaste out of the tube and onto your toothbrush every morning, you're continuing a tradition originally made possible in part by Johnson & Johnson in 1889.

90 years later and I still meet people who do not know that the protrusion on the cap is meant for puncturing the seal.

I have .4 original Tubes in their original boxes. Is there any value to them.?

In reply to by Rosellen Rummel

I don't have any information on any potential monetary value for the items, but if you have four tubes of Zonweiss in their original boxes, we would definitely be interested in them for the Johnson & Johnson Museum. Please email me at kilmerhouse@its.jnj.com with more details and a photo of the artifacts.