Guest Post: Sterile Sutures in Edinburgh from Lister to Merson to Johnson

As regular readers of Kilmer House know, Johnson & Johnson has been making sterile sutures since the late 1880s. Until Johnson & Johnson became a global decentralized company, our operations were largely based in New Brunswick, N.J., the city in which we were founded, and we sold our products throughout the world through sales agents as part of a thriving export business.  However, during the Nineteen Teens, the disruptions caused by World War I made it harder for some areas of the world to import our products and those of other manufacturers.  (That was one of the things that led General Robert Wood Johnson to embark on a program of decentralized global expansion for Johnson & Johnson.  The other was the understanding that locally managed operating companies knew their local patients, customers and markets best.)   The Edwardian era (for all of you Downtown Abbey fans!) set into motion a series of events that would lead to the formation of our operating company Ethicon Limited (now Johnson & Johnson Medical Limited) in Scotland  -- by the acquisition of a Scottish suture manufacturer whose most famous customer was none other than Sir Joseph Lister.

To tell that story, I’m happy to introduce my first-ever guest poster on Kilmer House, Don Logan.  Don is an IT Analyst in our Ethicon business in Livingston, Scotland and, being a Johnson & Johnson history enthusiast, he has written a history of our historic suture business in Scotland, a business whose earliest roots are connected with Sir Joseph Lister.  Here’s Don’s guest post:

Hi, I have always, since being a young teenager been interested in great leaders, innovators and companies that give you the “WOW” factor, like Carnegie, Ford, Apple to name but a few, and I came across the Kilmer House Blog by chance. This led me to read Lawrence G. Foster’s “The Gentleman Rebel” which really led me into what Johnson & Johnson was all about.  I knew then I had to research how the Ethicon business in Scotland came to be, and below is the beginning:

It all started prior to 1915 during the First World War with a man called George F. Merson, who had previously been employed by J.F.Macfarlan & Co, Edinburgh in their suture business. Trained as a pharmacist, Merson was highly respected in the profession and was appointed an examiner for the final examinations of the Pharmaceutical Society of Great Britain (now The Royal Pharmaceutical Society) in 1906. While working for MacFarlan he was involved in the manufacturing of sutures, but they had always used catgut and silk imported from Germany. Merson had seen correspondence between Lord Lister and J.F. Macfarlan & Co dated January 1894, in which Lister asked various details about the sterilising of catgut, and it would appear that by the end of the year 1894, Sir Joseph Lister was a regular customer of catgut from them. 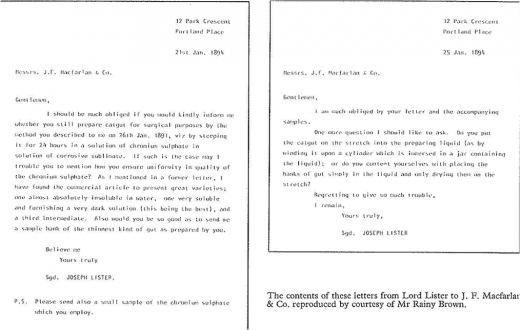 The important part here is That J.F. McFarlan & Co. did not manufacture the catgut themselves – they imported it. 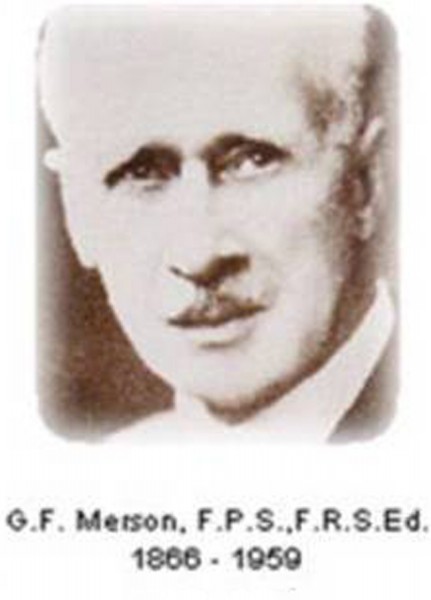 Sources overseas had dried up with the start of the war and Britain was in a critical position with the regard to catgut supplies. George Merson and his wife conducted experiments in their kitchen in Meuse Lane in Edinburgh to try to see whether they could manufacture catgut sutures in the UK.  These experiments were carried out in a private house in Edinburgh, where it was customary for the kitchen pulley to be a very strong structure for drying clothes.  Their kitchen pulley was used for stretching their experimental catgut in a process that was later tested by Merson’s surgeon friends. 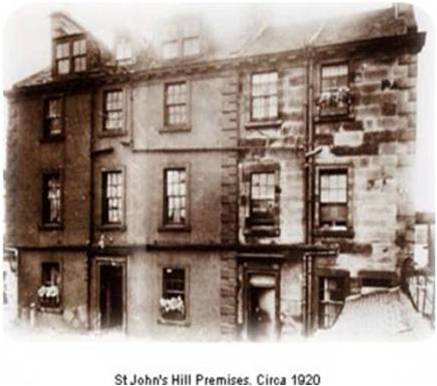 Mr. Merson moved his premises to St. John’s Hill in 1920 as need for sutures was increasing. By 1937, when Merson sold his business, Mersons (Sutures) Limited was a well-respected firm that manufactured sutures in the U.K. rather than importing them.

The history now changes to the early days of Johnson & Johnson, U.S.A. in their search for better suture materials, and particular better catgut. This search had started in the year 1889 or even earlier. In the year 1923 there appeared in the American Journal of Pharmacy an account by three senior employees of Johnson & Johnson U.S.A ( Dr Fred B. Kilmer, Ph,M, G.S. Mathey, Ph, G., Ch,G,B.C., and a H.J. Dobbs) titled ‘Ligatures and Sutures’. They published a most interesting historical account of suture materials, including catgut, silk, silkworm gut, linen, horsehair and wire. H.J.Dobbs in due time would become Chairman and Managing Director of the first Johnson & Johnson UK in Slough. In this capacity he began to manufacture sterile catgut products in the U.K. in the 1920’s. By the outbreak of the Second World War they had a small production of Cumol sterilisation of sutures which were packaged in glass tubes. The problem facing the UK at this time was that the majority of its suture materials had been coming from the United States or from Germany prior to 1938 and, of course, also from the factory of G.F. Merson Ltd. in Edinburgh. The name of George Merson lives on in Ethicon trademarks such as Mersiline® and Mersilk®. 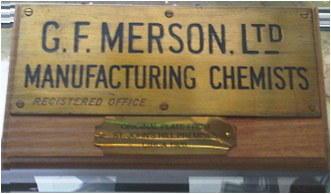 The suture manufacturing of Johnson & Johnson Ltd in Slough, Bucks, was very small, and the management of Johnson & Johnson assessed the U.K. suture business and decide how best to develop it. They saw great opportunities in the suture industry in the UK and then looked up north to Scotland at the business of G.F.Merson Ltd.  It was suggested that they should attempt to acquire the business of G.F.Merson Limited, Edinburgh, and someone from Johnson & Johnson travelled north to have talks with G. F. Merson Limited and the two began their conversation together which eventually led to the acquisition by Johnson & Johnson, New Brunswick, New Jersey, of the company in Scotland and the establishment in 1947 in Edinburgh of Mersons (Sutures) Limited.

2012 marks the 100 year anniversary of the death of Lord Joseph Lister, ‘the father of modern surgery’ and the most famous customer of G.F. Merson Ltd.  Johnson & Johnson’s history is closely linked with Lord Lister, starting in Philadelphia in 1876, when Robert Johnson, attended a medical conference where he heard Joseph Lister speak on his theories of antiseptics. Over ten years after Johnson had first heard Lister’s theories, Johnson & Johnson manufactured the first commercial sterile surgical dressings and sterile sutures, greatly increasing the survival rates of patients in hospitals. The possibilities of antiseptic surgery were the beginnings of Johnson & Johnson.

This year, Johnson & Johnson Medical Limited in the U.K. are delighted to be key sponsors of the Lister Centenary Celebrations of the Royal College of Surgeons of Edinburgh (one of the oldest medical institutions in the world and where Lord Lister was a former member) and the Royal College of Surgeons of England. These are a series of events to commemorate the life and contribution of Lister and to demonstrate how his theories are as relevant to modern healthcare as they were in Lister’s day. Given Lister’s close involvement with Johnson & Johnson’s history, it is fitting that the centenary celebrations of his life and works this year are so closely linked with Johnson & Johnson’s 125th anniversary last year.

A Big thank you to Margaret for giving me the opportunity to work with you putting this blog together.

Don, thank you for putting together such a fascinating early history of the suture business in the U.K.and bringing to light that connection with Sir Joseph Lister!

Thank you. This blog in particular was very interesting to me, since I am half Scottish, and I actually went to visit ETHICON LIMITED in 2001, and was very well received, and now I know a lot more about the roots of our Scottish affiliate, for which I am grateful to you both, Margaret and Don. Marcia

Thank you Don for this fascinating history. Finally I know how MERSILINE got its name. Hurray for Mrs. Merson. She must have been a saint to give over her kitchen to a gut stretching operation! By the way, Lord Lister was a pretty demanding customer.

Hi, always so interesting. I knew that IT people were passionate not only by computers : Don demonstrates it. Best regards,

Don, this is a great post! Can you shed some light into why the name ETHICON was chosen?

In reply to by Mauricio

Hi Mauricio, I don't know if Don is checking the comments section of his guest post, so I'm stepping in to answer! The name ETHICON originally was the brand name of a line of sutures manufactured by the Johnson & Johnson Family of Companies. As part of the Company's decentralized approach, when that historic suture business was formed into a separate operating company, it was given the name ETHICON after that particular line of sutures. We don't know where the name ETHICON originally came from, but if anyone knows, we would love to hear the story!