How to Decorate a Pharmacy Window

Throughout its history, Johnson & Johnson has published a wide variety of information designed to educate doctors and surgeons, the public, and parents.  We also published information for retail pharmacists for several decades, in the form of a trade publication called the RED CROSS® Messenger.  It educated pharmacists about the Company, its products, and about how to increase their business.  And according to that publication, one of the most important things a retail pharmacist could do was to decorate the pharmacy window.

The RED CROSS® Messenger was an example of the close partnership between Johnson & Johnson and retail pharmacists 100 years ago.  The Company saw pharmacists as partners in helping the public, as evidenced by programs such as the national Clean Up Weeks to help prevent infectious diseases, and the promotion of retail pharmacists as knowledgeable through campaigns such as “Your Druggist Is More Than a Merchant.”  So why the emphasis on window decoration?  Because a well-decorated window could increase the pharmacist's business and bring more people into the pharmacy -- an important venue for scientific advice and for improving health.

In May of 1908, Johnson & Johnson began publishing the RED CROSS® Messenger, a trade publication for the retail pharmacists who sold our products.  (Back then, before supermarkets and modern distributors, retail drug stores sold everything from consumer products to professional medical products.) The Messenger was written and edited by our director of scientific affairs Fred Kilmer, himself a former retail pharmacist.  Just as the Company saw its relationship with the medical profession as a partnership to advance sterile surgery, science and health care, so too did it see its relationship with pharmacists as a partnership to advance health care and public health.  Much of that was due to Kilmer.

The Messenger offered tips on how to decorate seasonal windows, how to decorate them around specific themes, such as First Aid or spring cleaning, and how to make them attractive and interesting in order to draw people into the pharmacy.  It also published photographs of pharmacy windows sent in by pharmacists from all over the U.S. and throughout the world.  Pharmacists took the ideas in the Messengers and used them to construct a wide variety of creative windows, and then photographed them and sent the pictures to Kilmer, who printed them in the RED CROSS® Messenger along with a description of the kind of materials and technique used to decorate the window.  The captions frequently contained decorating advice.  Pharmacists loved seeing all of the window ideas, and drew inspiration from each other…a lot like the readers of today’s home decorating and DIY blogs.

Over time, some of the windows grew more and more elaborate, with live demonstrations. (One pharmacist used actual Boy Scouts in his window to demonstrate First Aid!)

Johnson & Johnson also made a wide variety of free advertising materials available.  They were printed in the Company’s printing department.  All an interested pharmacist had to do was write to the Advertising Department, and he would be sent an incredible variety of color ads, stand-ups, scale pan covers (they covered the round pans on the scales pharmacists used to weigh raw materials), pamphlets, electros and more.  What on earth was an electro?  In the days long before digital advertising materials, electros were already-created artwork that the pharmacist could use to advertise his pharmacy.

The Messengers also regularly contained articles about Johnson & Johnson’s philosophy, profiles of the various departments in the Company, and information on how the products worked, so that the pharmacists would be more informed health advisors to their own local customers.

The Messengers also started and promoted a Clerk’s Club for pharmacy clerks.  The club’s motto was “Keep to the Front,” and it was a reminder to clerks not to stay in the back of the pharmacy, but to go toward the front where they could be visible and helpful.  The Clerks Club educated pharmacy clerks on the business of retail pharmacy, how to provide service to customers, how to achieve success in their own careers and…naturally…how to decorate a pharmacy window. 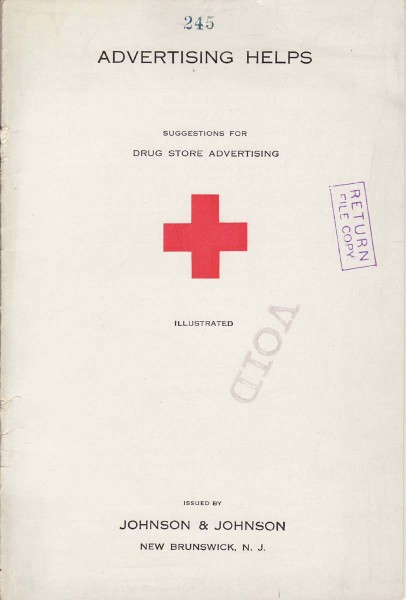 In 1910, Johnson & Johnson published a booklet titled Advertising Helps which, as the story at Johnson & Johnson goes, was written by none other than the poet Joyce Kilmer, Fred Kilmer’s son.  Joyce Kilmer did some freelance writing for Johnson & Johnson, and he mentioned writing a "book about window displays" for the Company.  [Joyce Kilmer, A Literary Biography, John Covell, Write-Fit Communications, 2000, p. 10]  Advertising Helps covered every aspect of advertising and promotion in a retail pharmacy, from choosing the content of a window display to how to promote even hard to advertise products, to how the Company’s free health information could help bring customers into the pharmacy.  Here’s a sample, with Joyce Kilmer’s sense of humor in evidence:

“It is a good plan to notice the fashions in colors, and to be guided by them occasionally.  During the anniversary of the invention of mauve, many druggists took advantage of the temporary popularity of that color, and decorated their windows with it.  There was some difficulty, however, in selecting other colors to harmonize with it.  When green was a fashionable shade, it was found exceedingly satisfactory for display purposes. “Alice blue” also, was during its brief vogue, used to advantage by many druggists.”  [Advertising Helps, Johnson & Johnson, New Brunswick, N.J., 1910, p. 2]

Despite the humor potential in decorating windows entirely in light purple to celebrate the anniversary of the invention of mauve, Fred Kilmer saw decorating a window as a tremendous responsibility:  it was the way that retail pharmacists got people to go into the pharmacy.  Here’s what Fred Kilmer said in the RED CROSS® Messenger:

“The window trimmer, be he boy, man, clerk or proprietor, holds one of the most responsible positions in the store so far as his contact with the public is concerned.  He can make or break; he can establish and maintain his good reputation.  He can gain new trade; he can keep old customers; he can increase the business.  He can put the store in the front rank, or he can allow it to sag behind.”  [RED CROSS® Messenger, Vol. V, No. 8, January 1913, p. 230]

Kilmer counseled simplicity when decorating a window, and in 1913, he looked back on 25 years of the evolution of retail pharmacy windows, going back to 1886 when he himself was a retail pharmacist.  (Kilmer always tried to make the Opera House Pharmacy windows interesting and educational.)

He wrote: “Twenty-five years ago, as a rule, druggists made but little use of their windows; in fact, many drug store windows were small in size and their use was limited – show bottles, show jars, fly specks, dirt, litter!”  [RED CROSS® Messenger, Vol. V, No. 8, January 1913, p. 230]

Kilmer went on to point out that Johnson & Johnson were early advocates of “modern window shows,” as he called them, and furnished retail pharmacists a huge variety of ads, posters, and displays, all designed to increase the pharmacist’s business and make the retail drug store a more interesting, more educational place.

Here’s some advice from Fred Kilmer:

“Give a clear-cut message in your windows and make it impressive.”

“The advertising value of the window is lost unless the articles on display tell their own story, tell it quickly, and to the point.”

“The window is not a curiosity shop”  (Kilmer was not in favor of haphazardly thrown together combinations of random items – he felt a window should stick to a theme.)

And here are some examples of retail pharmacy windows decorated with materials supplied by Johnson & Johnson, and according to the principles set out in the RED CROSS® Messengers and Advertising Helps.  Today, perhaps there would even be a reality TV show about who could decorate the best window.  No word on whether any of these windows were mauve.

Johnson & Johnson - always leading from the start with innovative ideas. I enjoyed this article very much. Thank you, Marcia Mary

Seeing the store display of Lewis Flamer in Washington D.C. ,reminds me of my father during the1950's.He was a licensed pharmacist and sales detail representative for McNeil Laboratories Inc. ; and Washington D.C. was his territory. He may have called on that very same phamacy and shown some of his display items there. In 1955 Children's Tylenol Elixer was one of the items he was giving a big sales push to the pharmacies. My father was Warren N. Quenzel.

In reply to by Duane Quenzel

Thanks for sharing your father's story about being a pharmacist and a sales representative for McNeil Laboratories in the 1950s. It's very likely that he did visit that same pharmacy! McNeil actually had its beginnings as a family pharmacy in Philadelphia, PA in 1879. That business, and all of Johnson & Johnson, had a great respect for pharmacists. In fact, one of our founders, Robert Wood Johnson, began his career as an apprentice in a retail pharmacy, as did many other employees throughout our history.