As we celebrate Veterans Day, we remember the men and women past and present who serve their countries.  At Johnson & Johnson, our employees have a long tradition of service that dates back to the Spanish American War in 1898 -- which started some traditions here that we still have today. During these times, Johnson & Johnson employees supported each other, sent care packages to their colleagues in the military, and kept each other current on the news -- both from the Company and from those serving in the military.  During World War II, employees maintained this tradition of support as part of their many contributions to the war effort.

Among those contributions were the Company’s War Bonds drives.  War Bonds drives were common events during the 1940s across the U.S., and Johnson & Johnson employees held them as well.  In fact, the War Bonds rally at the Company's New Brunswick, New Jersey headquarters hosted a very special guest:  Hollywood movie star Hedy Lamarr.  The title of this post, “Keep ‘Em Flying,” is a reference to the Company’s War Bonds rallies:  it was a slogan of the national War Bonds campaigns during the 1940s, and it was used in the campaigns at Johnson & Johnson as well.

Johnson & Johnson employees also kept letters and packages flying to their colleagues who were away serving their country.  The September 15, 1943 edition of the Johnson & Johnson Bulletin (our U.S. employee newsletter in the 1940s) noted that 300 care packages were mailed from Johnson & Johnson to employees in the military.  The packages included gauze pads, JOHNSON’S® Baby Powder, tooth brushes, analgesic balm, burn ointment, dental floss, BAND-AID® Brand Adhesive Bandages and a Travel First Aid Kit.  The Company apologized for not being able to include employees overseas in the mailing, but postal regulations at the time prohibited it.  The solders receiving the packages were stateside only, as the September 15, 1943 edition of the Bulletin the employee newsletter, explained.  “Because of strict postal regulations, only servicemen in this country received the packages.”

Here are some of the thank you letters our employees sent back to their colleagues:

Written by Philip B----, an Ensign in the U.S.C.G.R., to his colleagues in the Plaster Finishing Department.

…It’s so nice to know that the ‘folks back home’ continue to remember us when we’re far away.  It makes us feel that our task is a vital one and that, even when the going gets rough, there are those who are depending upon us to do our jobs well.  The spirit which all the employees of Johnson & Johnson have shown again and again is what those of us who are actively participating need to keep us going.”  [Johnson & Johnson Bulletin, January 30, 1943, p. 7]

“It makes a soldier feel good to receive mail from back home.  Keller from the Printing Department is up here with me, too.  He also sends his regards to all of you.  Thanking you again for the swell Christmas gift.  Just buy the bonds and we’ll do the rest.  Keep ‘Em Flying!”  [Johnson & Johnson Bulletin, January 30, 1943, p. 7]

“Hi-Ya Folks!  Well, here I am again.  After spending a few enjoyable weeks in England, I picked up my bag and baggage and moved off to North Africa.  I am back on the job again.  I like to be doing this work, as it is worth while and interesting and makes the days go fast…Nearby we have two hospitals.  I think I’ll be here for a while supplying them…Although it has rained all day, it is usually quite warm in the daytime, but chilly at night.  We are passing through the last few weeks of winter here.”    [Johnson & Johnson Bulletin, January 30, 1943, p. 7] 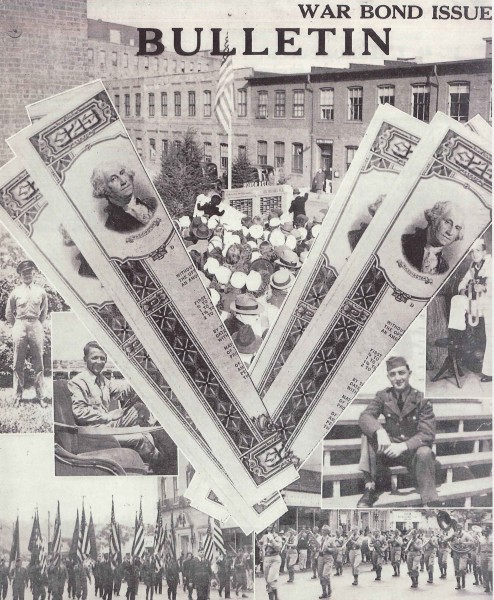 The Bulletins were also full of news about the men and women at Johnson & Johnson who were serving their country.  (The Bulletin publication covered U.S. employees only.) The Company’s women employees made a number of contributions, ranging from employee War Bonds efforts to putting together airplanes.  Some became WAVEs or WACs.   Here’s an excerpt from a letter from Pfc. Frances R----, who joined the WACs in the 1940s.

The Bulletin also reported that Helen K--------, a former employee in the Company’s Ligature department, felt the call to do something more and she left the Company to become a riveter at the Boeing Aircraft plant in Washington State.  Helen reported back to her former colleagues that she was a “rivet bucker” working on the wings of flying fortress airplanes…just like Rosie the Riveter on this famous poster.

Another employee, Dores C----, enlisted in the New Jersey State Guard for the third time.  In 1916, during World War I, she had been a sergeant and a staff interpreter in the military, and she continued her record of service in World War II as well.

During this time, some of the Company’s operating units produced products for the military, not just bandages, dressings, sutures and First Aid Kits, but also camouflage material, screens to keep mosquitoes away, gas masks and duct tape, which we invented as a military product.  As a result, Johnson & Johnson was awarded the prestigious Army/Navy “E” Flag, which the Company proudly displayed.

The “E” Flag had its origins in 1906 as a military award.  The “E” stood for excellence, and during the 1940s, the award was extended to include civilian organizations that showed excellence in producing products of all kinds for the military.  The “E” Flag generated enormous pride among employees at Johnson & Johnson, because it was a recognition of their efforts in meeting a different kind of need.

Our employees in military service during this time felt the very tangible support of their colleagues not only through the letters and care packages they sent, but also through the  many War Bonds drives, the military products (who doesn’t appreciate duct tape!) and the many other products they depended on  -- products made by their co-workers back home.

“We’re on maneuvers now and will be for some time.  One night we had to break camp in a hurry and in the scuffle I left some of my equipment behind.  Among the equipment lost was my soap, so I was washing with shaving cream until I received that swell gift from J. & J.  Some days on our maneuvers we hiked 25 to 30 miles a day, and let me tell you at the end of the day there’s a lot of sore feet, knees and hips.  This is where I go to work strapping ankles and used over 300 rolls of 3 in. x 10 yards of J. & J. adhesive.  You can tell those girls in the plaster room to keep that plaster rolling.” [Johnson & Johnson Bulletin, January 30, 1943, p. 7]

Today, employees in the Johnson & Johnson Family of Companies continue to serve their countries…one of our oldest employee traditions going back 113 years.   And we continue to support these colleagues and remember them on Veterans Day.

i live in eastern north carolina, in the heart of the marine corp country. this blog is of particular interest to me as i know a women who worked in DC as "rosie the riveter". She was one of the first to hold this job during the war. truly as amazing woman !!

EXTRAORDINARY ARTICLE!!!! Every time I read one of your blog articles, I great pride in being an employee of Johnson & Johnson. Thank you for the historical education you give to all of us. Marcia

Hi! I am a reader from China,Beijing. I am a little confused when reading this page. I don't quiet get it about "War Bond". Could you please tell me what war bonds drives are and what that campaign for?

In reply to by Woodtock

During World War II, War Bonds were government-issued securities used by the United States government to finance the war effort. They generated funds and made U.S. citizens feel that they were doing their part to support their friends and family members who were overseas in the military. Many organizations, Johnson & Johnson included, held War Bonds drives during the 1940s to get employees to buy the bonds. During that time, many citizens considered it to be their patriotic duty to participate in War Bond Drives.

Hope that helps explain them!

Thanks a lot! I fully understand now!