125 Years Ago: Our Sales Office and Advertising

Like every new company just starting out, Johnson & Johnson advertised, and the earliest Johnson & Johnson ad in our archives happens to be from 1886 – the year we started.  The 1886 ad is for our first consumer product, Zonweiss, which was a tooth cream -- the late Victorian version of a toothpaste.  Zonweiss, which meant “white teeth” in German, was applied to the toothbrush with a tiny spoon that was included in the package.  In a few years, when we became one of the first companies to package toothpaste – Zonweiss, of course – in that new innovation, a collapsible tube, the spoon would become unnecessary.  But in an era of tooth powders that had to be mixed with water, a tooth cream stood out from the crowd.  So did the Zonweiss advertising.

Here’s another fabulous Zonweiss ad, from 1887, with a testimonial from the famous fictional title character of Gulliver’s Travels:

The Zonweiss ads were by far the most relentlessly eye-catching of the early Johnson & Johnson advertising, perhaps because it was felt that the ads for a consumer product could be more wildly creative.   Here’s another one of our earliest ads, by way of comparison. 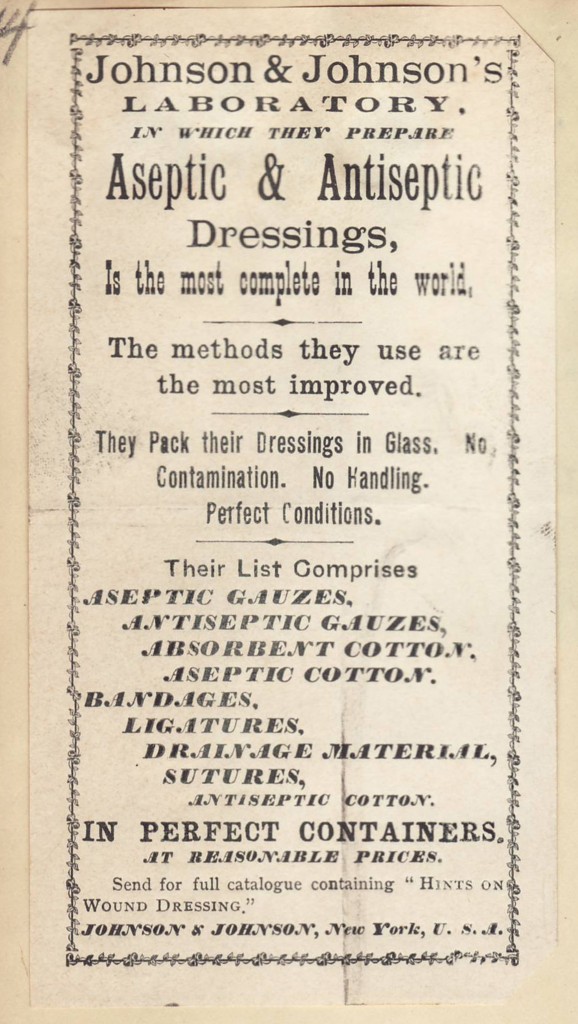 So who did our early advertising?  Company founder Robert Wood Johnson turned to someone he had met several years earlier who had become a good friend…and who just happened to have an ever-expanding talent for advertising.  Johnson’s friend, whose name was James, had started as a bookkeeper at a small advertising agency called Carleton & Smith, and in 1878 he bought the agency he worked at for the sum of $500 and renamed it after himself.  His full name?  J. Walter Thompson.  (Fans of advertising might recognize Thompson as one of the major pioneers in the history of advertising, so once again, Company founder Robert Wood Johnson’s outgoing nature and capacity for making friends had proved to be extremely valuable in the early years of Johnson & Johnson.)

Thompson handled the Johnson & Johnson account himself....and Robert Wood Johnson provided a great deal of input to Thompson in the development of our early ads.  (Interestingly enough, that was a trait that Johnson’s son, General Robert Wood Johnson, would inherit.)  R. W., as he was known, was very particular, and didn’t hesitate to express his opinion -- or send Thompson back to the drawing board.  Fortunately, Johnson had excellent instincts.  Let’s take a look at some of his feedback to J. Walter Thompson:

“ ‘I return the sketch and hardly see how you can make an advertisement out of it.  It needs to have a very black background in order to throw out the white letters.’ ”  [Letter from Robert Wood Johnson to J. Walter Thompson, as quoted in Robert Wood Johnson, The Gentleman Rebel, by Lawrence G. Foster, Lillian Press, 1999, p. 51]

Hmmm.  Early ad.  Black background.  White letters.  Could Robert Wood Johnson have been writing about one of the Zonweiss ads…like this one?

J. Walter Thompson’s agency pioneered advertising as a career for women and, oddly enough, invented the grilled cheese sandwich for a client.  There’s a picture of Thompson at this link.    Thompson’s agency was in New York, and -- conveniently -- so was the Johnson & Johnson sales office.  In the early years of the Company, while James Wood Johnson was setting up operations in New Brunswick, Edward Mead Johnson worked out of the New York office overseeing sales, among his other duties.

Edward Mead Johnson, the next-to-youngest Johnson brother, was born on May 13, 1852 at the family’s farm in Crystal Lake, Pennsylvania.  Of our three founders, Mead, as he was known, had the most varied career before founding Johnson & Johnson:  he was a teacher for a year in the local school and then went to law school at the University of Michigan in 1875.  After completing the one-year law course and trying one case, he accepted his brother Robert’s invitation to move to New York and join Seabury & Johnson.  Like his brother James, Edward Mead Johnson started as a salesman for Seabury & Johnson, which was the best way for him to get to know the business.  He later did Seabury & Johnson’s advertising and he moved into a similar role at Johnson & Johnson.

Our first New York office was at 23 Cedar Street in lower Manhattan.  A few years later it was relocated around the corner to William Street which was, in the late 1800s, apparently the location for your New York office if you were a health care company.  In fact, a reporter for The Pharmaceutical Era, a 19th century trade publication, was able to do all of his site visits for an article about health care companies in 1894 just by walking down William Street and stopping in at all of the offices.

Here’s how that writer described his visit to the Johnson & Johnson office:

“Johnson & Johnson’s office is at No. 92 William street.  We considered ourselves very fortunate in finding the principal members of the concern at the office, for they are busy men…We met Mr. R. W. Johnson, the president; Mr. E. M. Johnson, the treasurer, and Mr. J. W. Johnson the secretary.  They are all modern gentlemen…” [The Pharmaceutical Era, May 1, 1894, p. 415]

When the writer expressed an interest in seeing the Company’s New Brunswick operations, Robert Wood Johnson immediately took him there by way of the Cortland Street ferry to New Jersey, where they could catch a train to New Brunswick. The writer mentioned how glad he was that Johnson walked him across the pedestrian bridge across West Street, which connected to the second floor of the ferry building, instead of having to dodge the “trucks, horse cars and other vehicles that crowd that part of West street.” [The Pharmaceutical Era, May 1, 1894, p. 416]

In the early years of Johnson & Johnson, our New York sales office thrived in the fast-paced, creative atmosphere of New York City, building sales and working with J. Walter Thompson himself on ads for the products that were being developed in the quieter, but no less creative atmosphere in New Brunswick.

Our Founders were so inspirational

Thank you for this delicious morsel.