It’s the winter of 1886, and Company founders James Wood Johnson and Edward Mead Johnson have solved the issue of where to put their new company, thanks to James’s very lucky train journey.  New Brunswick, New Jersey turned out to be a great location:  it had the railroad, the Delaware & Raritan Canal and the Raritan River to transport raw materials to the new company, and to ship products out.  And it had a lot of other industries -- a cigar box manufacturer, and a fruit jar manufacturer, for example -- that would prove to be very useful to the new business as it looked for new and creative ways to package the new products it would be making.

Robert Wood Johnson’s former business partner George Seabury heard about the new business, and he became concerned that Robert was involved despite his agreement not to re-enter the health care field.  Robert, true to his word, had not joined Johnson & Johnson…and he wrote his brothers a letter that stated “I write this to say that under no circumstances can I be induced to take any part in any business that may conflict with the business of Seabury & Johnson.” This post has a longer excerpt from Robert’s letter, if anyone’s interested in reading it.  Having satisfied everyone that they were truly on their own with the new business, James Wood Johnson and Edward Mead Johnson got to work and, as 1886 progressed, the tiny new company with only 14 employees was ready to start.

Our first employees were seven men and seven women, many of whom had been employees of Seabury & Johnson (the Johnson brothers’ former company) in East Orange, New Jersey.  The manufacturing (under the management of engineer James Wood Johnson) would be done in New Brunswick.  A sales office (managed by Mead) was rented at 32 Cedar Street in New York City.

In New Brunswick, James Wood Johnson and the men and women who built the Company started work.  The first thing would be to design and build the machinery that would allow Johnson & Johnson to mass produce not only improved medicinal plasters, but the first ever mass-produced sterile surgical dressings.  James Wood Johnson used his engineering talents to design and build the machinery, and the first months of the new company were no doubt occupied by this work.

By March of 1886, the activity in the tiny former wallpaper factory with its 14 employees had attracted the interest of The New Brunswick Times, which published the first-ever article written about Johnson & Johnson, titled “A New Factory.” 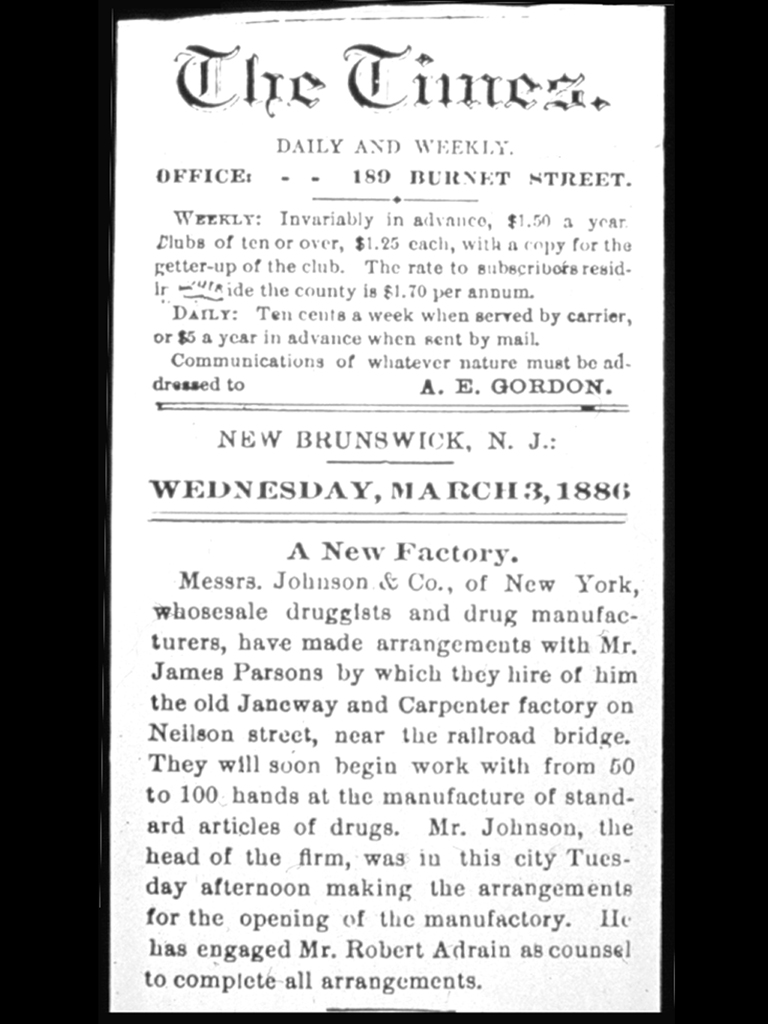 On March 25th, the new business reached another milestone:  James Wood Johnson wrote the first ever check from Johnson & Johnson.  It was made out to the local freightmaster for the railroad, for the sum of seven dollars and ninety-two cents.

Meanwhile, back in the sales office in 1886, our one bookkeeper and one stenographer took on multiple roles, just as the men and women did who were setting up our manufacturing in New Brunswick.  Our two New York employees took product orders, packed them, entered the accounts by hand in ledger books (you can see the page from one of the ledgers below), did the billing…and swept the floors and cleaned the windows at 23 Cedar Street.  In 1921, looking back on the Company’s beginnings in 1886, Fred Kilmer wrote a vivid description of what it was like in the Johnson & Johnson New York sales office before the advent of the vastly superior high-tech modern conveniences of the 1920s.

“In those days there were no loose-leaf ledgers, no adding, billing and computing machines; the typewriter and the telephone were in their infancy; there were no auto trucks, no trolleys, no airplane deliveries; and no orders came by wireless. Modern office appliances and systems had not been invented…Orders were written by hand and copied with a letter-press.”  [The Red Cross Messenger,Vol XIII, No. 6, 1921, p. 368]

According to Kilmer, Johnson & Johnson had 1,099 customers in 1886, our first year in busines, many of them small retail pharmacists. In 1886, Kilmer wrote, “Listerism had not gained a foothold; sterilized, aseptic dressings were unknown.  Johnson & Johnson had to pioneer – to pave the way for the medical and surgical profession, to apply the advances of the art.  They realized, back in that first year, that the druggist, by his training and all natural rights, was the proper purveyor and dispenser of the products which they manufacture.”  [The Red Cross Messenger, Vol XIII, No. 6, 1921, p. 369-370]

That focus on retail pharmacists as partners in selling the new company’s products and spreading the practice of antiseptic surgery would have far-reaching significance for Johnson & Johnson.  It would not only help generate business, but would bring to the new company one of the most talented and creative architects of its early growth, who would help set Johnson & Johnson on the path on which we continue today.

Next Post: Robert Wood Johnson joins the Company at last and moves to New Brunswick.  His habit of walking downtown will lead him to meet a retail pharmacist whose ideas would change Johnson & Johnson..and lead to this blog!  Stay tuned to find out more.

I look forward to every one of your articles!! You not only take us back in the history of our company, but you make it come alive for us. As we celebrate 125 years of our company, your posts will be an important part of the celebration!! Marcia

I've always enjoyed to read about history especially if its from the parent company you work for.
Lifescan is also celerating our 30 years!!!
Have been with Lifescan for 24 years myself.

Glad you enjoyed the post! Congratulations on the LifeScan, Inc. 30th anniversary! This is a big year for anniversaries here -- not only are we celebrating our 125th, but many of our operating companies have milestone anniversaries this year too.

My grandfather, William Alexander Kane, was one of the original executives at Johnson & Johnson, New Brunswick, New Jersey and a friend of the Johnson brothers from their friendship at Christ Episcopal Church. Would you be able to provide me with any information concerning my grandfather's employment at Johnson and Johnson?

In reply to by janet

Thanks for sharing your family's connection to Johnson & Johnson. Since your grandfather was a friend of the Johnson brothers due to their connection at a New Brunswick church, I am assuming that means that your grandfather also lived in New Brunswick, as did Robert Wood Johnson and James Wood Johnson. I will take a look in our archives and see what information we have. I will either post it in the comments here or send to you via email.