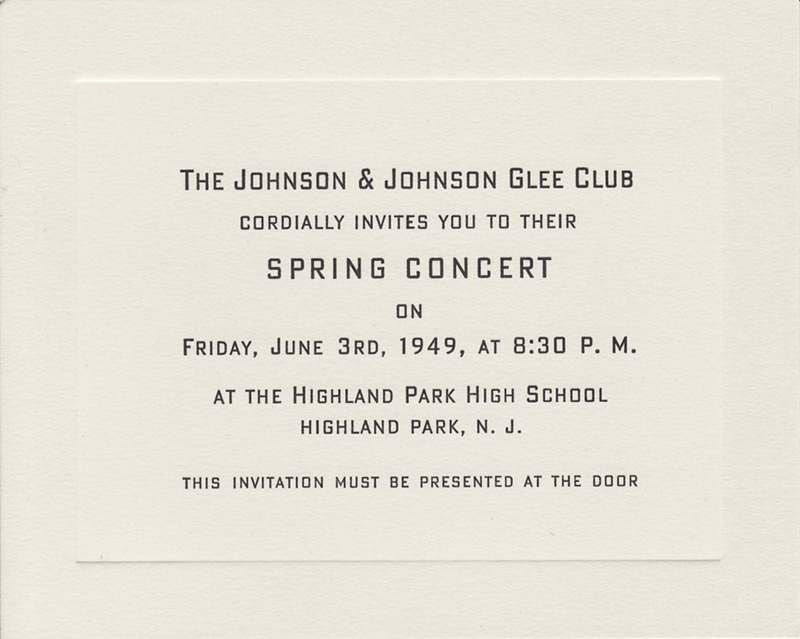 Regular readers of Kilmer House know that Johnson & Johnson has been a pioneer in many areas of health care, but we also led the way in another, lesser known area as well: singing.  Singing? Yes, singing!  The massive success of the hit television show Glee has renewed people’s interest in glee clubs, so this seems like the perfect time to point out that, starting in 1942, Johnson & Johnson employees had a very popular Glee Club of their own that performed regularly at local and not-so-local events, sang on the radio and even appeared with a Hollywood movie star.

The Johnson & Johnson Glee Club was formed in 1942 for “the pleasure and recreation” of Johnson & Johnson employees, according to a December 19, 1943 newspaper article.  The members of the club hired a musical director and a piano accompanist, and thought it would be a good way to get some musical instruction and participate in their favorite hobby.  But within a year, our Glee Club employees found that they were quite in demand, with a busy schedule as performers at charitable events throughout the State of New Jersey. 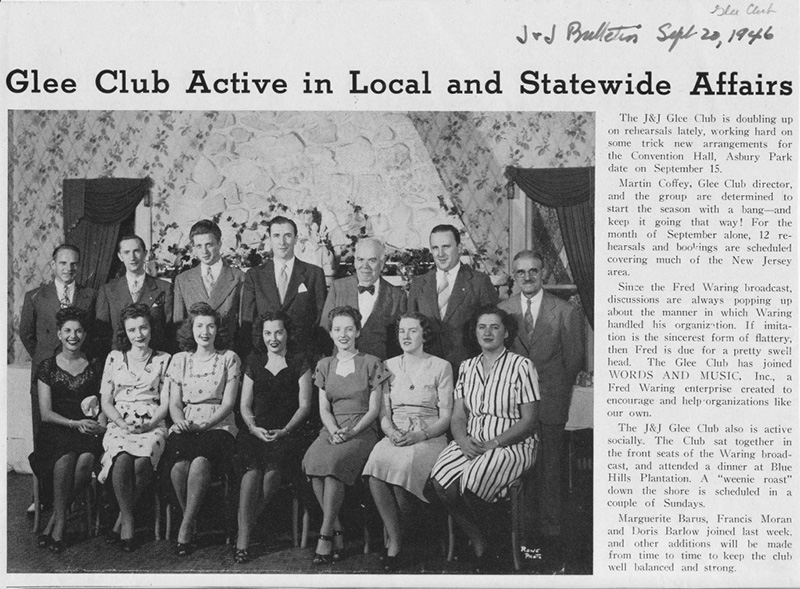 Our Glee Club had both men and women members.  They performed for free at all events, with transportation in most cases provided by the Company.  So...how busy was our Glee Club?  During the 1943 holiday season, our employee Glee Club entertained patients at the Veteran’s Hospital in Menlo Park, sang holiday songs with local church choirs, and sang for holiday shoppers and at a dinner for the Raritan Traffic Club in New Brunswick. In February of 1944, the Glee Club performed at a number of World War II War Bonds drives, and joined other company Glee Clubs to sing at a theater in Newark, New Jersey as part of a program featuring well known Hollywood actor Ralph Bellamy and other celebrities of the day.  In 1949 they sang at a huge charity show at Convention Hall in Asbury Park that was broadcast over the radio, and were so popular that they were invited back the following year.  That same year, they sang for an audience that included New Jersey Governor Alfred E. Driscoll; it will come as no surprise that they closed that performance by singing a song called “New Jersey Is the Place for Me.”

Our employee Glee Club concerts generated frequent stories and reviews in The Daily Home News, New Brunswick’s newspaper, and their concerts were broadcast regularly on WCTC and WDHN radio.    Here’s what the January 30, 1949 edition of The New Brunswick Sunday Times said about them:  “The glee club is a fine example of what a small group of good voices can do.  It sings with fullness of tone and subtle shading of expression…the club has grown from a choral group to the proportions of a musical troupe of entertainers.”

In 1950, the editors of the Johnson & Johnson Bulletin, our employee magazine at the time, decided to publish some facts about the Glee Club.  They estimated that, in the past five years, the club had entertained 65,000 people at 91 concerts.  The songs they performed were varied, and ranged from swing and novelty songs to light classics and college songs, depending on the audience at each show.  They rehearsed every Monday night and performed an average of three public concerts per week…quite a vigorous schedule for a group originally started by our employees for fun and recreation.

Like many traditions at Johnson & Johnson, our Glee Club has roots much earlier in the Company’s history.  Our very first employee singing group actually began 101 years ago, in an era when choral societies and singing groups could be found at many universities and other organizations.  (In fact, Rutgers University still to this day has an all-male Glee Club.  Theirs was started in 1872.) In September of 1909, a group of Johnson & Johnson employees, with the encouragement of Company management, decided to start all-male choral society at Johnson & Johnson.  They called themselves the RED CROSS® Choral, after the brand name on many of the Company’s surgical and wound care products.  The choral group had 40 members, it practiced weekly and was led by a music professor from the Middlesex Borough school system.  They gave their first concert in May of 1910 in association with the Laurel Club, our employee organization for women employees.  Here’s what the New Brunswick Daily Home News said:

“The community at large should appreciate the efforts of the management of this enterprising company, in behalf of its employees, in encouraging such a highly educational, as well as social, event of this kind.  It will be remembered that each member is employed at the Johnson & Johnson Company.”  [Daily Home News, May 9, 1910]

The Home News reported in its May 12, 1910 edition that the concert was a huge success.  Our employee choral group went all out for that concert:  they wore matching white linen jackets and red ties, and stood in front of a white backdrop. (Unfortunately, we don’t have a picture of them, but alert readers may notice that those colors – red and white – still feature very prominently in the way we represent Johnson & Johnson.)   Laurel Club members acted as ushers, arranged for refreshments and organized the dance that followed the concert.

One of the characteristics of employees throughout Johnson & Johnson history has always been the amount of drive, enthusiasm and determination that they put into their efforts.  It’s one of the major reasons our company has been in existence for 125 years.  Our employees put that same drive and effort into their all-male choral group and, several decades later, the Glee Club.  Our Glee Club may originally have started just for fun, but during the 1940s and 1950s they were our very own wildly successful singing group at Johnson & Johnson.

I loved reading this article. Singing has always been part of my life, through my parents and family. It was nice to see that Johnson and Johnson felt it was something important and nurtured the creative talents of its workforce. I wish I was alive during that period to have heard them. I am sure it would have been wonderful!

I have sung in different church choirs over many years, and singing is an activity I love. I wish we could have maintained the Glee Club at J&J. I would certainly have been a very enthusiastic member of it!! Thank you for keeping all the stories coming to us, and promoting a deeper understanding and knowledge of our company's history. Marcia

Great post!
What a rich culture Johnson & Johnson has.
I remember at Harvard how wildly successful the glee club was. Their name is The Krokodillos. And they were quite proud of the fact that they dated back to 1946. But now I learn that Rutgers had a glee club in 1872! My a capella classmates will be humbled.

The Glee Club certainly predates me, but some may recall the 1997 memorial service for our respected and indeed beloved Chief Financial Officer Clark H. Johnson. It was held held in the Rutgers Chapel and an ad hoc choir of J&J associates, directed by the multi-talented Clarence Lockett, sang just as Clark wished.