Ten Cool Things From Our Archives

To help everyone cool down in the end-of-summer heat, Kilmer House brings you ten cool things from our archives.  Enjoy! 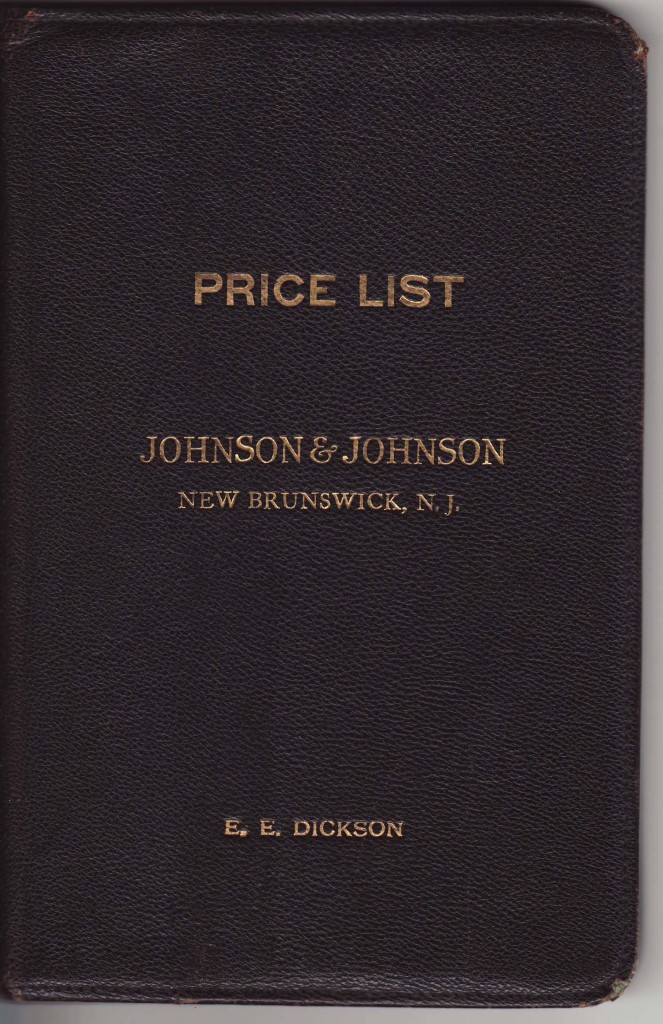 1. A 1927 price list that belonged to Earle Dickson, inventor of the BAND-AID® Brand Adhesive Bandage.  The pages inside have handwritten notes by Dickson and, yes, his invention is listed, on page 11.  Here's the page that was most meaningful to Earle Dickson, with his handwriting. 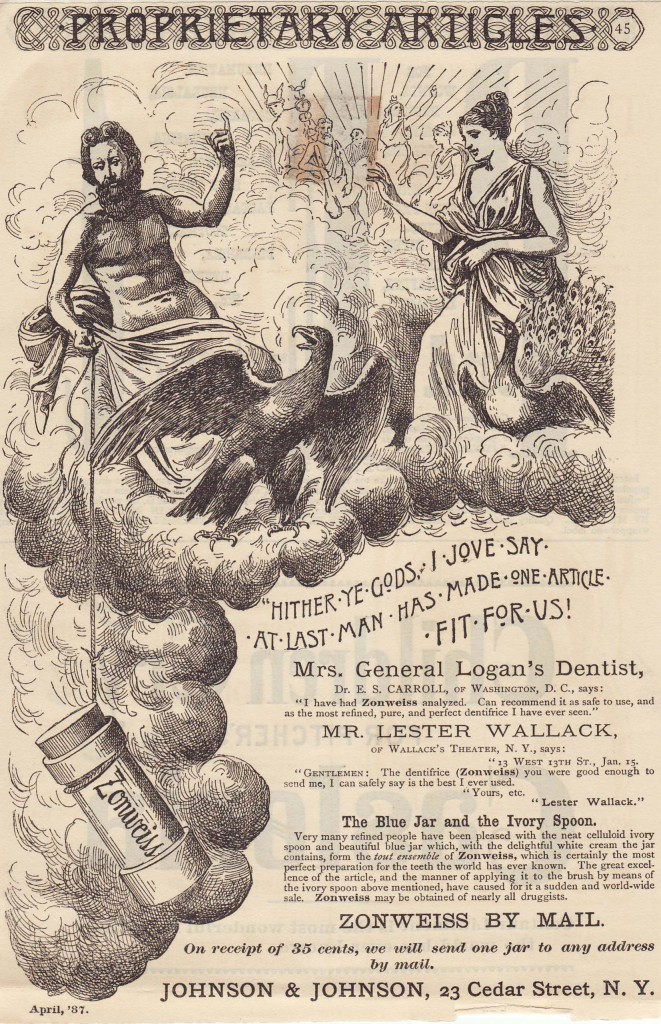 2. A Zonweiss ad from 1887, the year after Johnson & Johnson was founded.  This one shows figures from Ancient Roman mythology discussing the merits of Zonweiss tooth cream, the Company’s first consumer product. 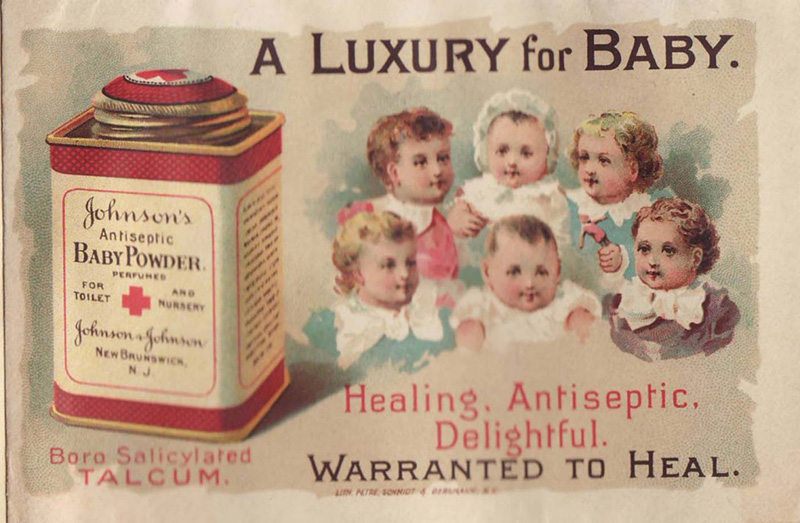 3. Perhaps the earliest ad for JOHNSON’S® Baby Powder, from the 1890s, the decade the product was first introduced. 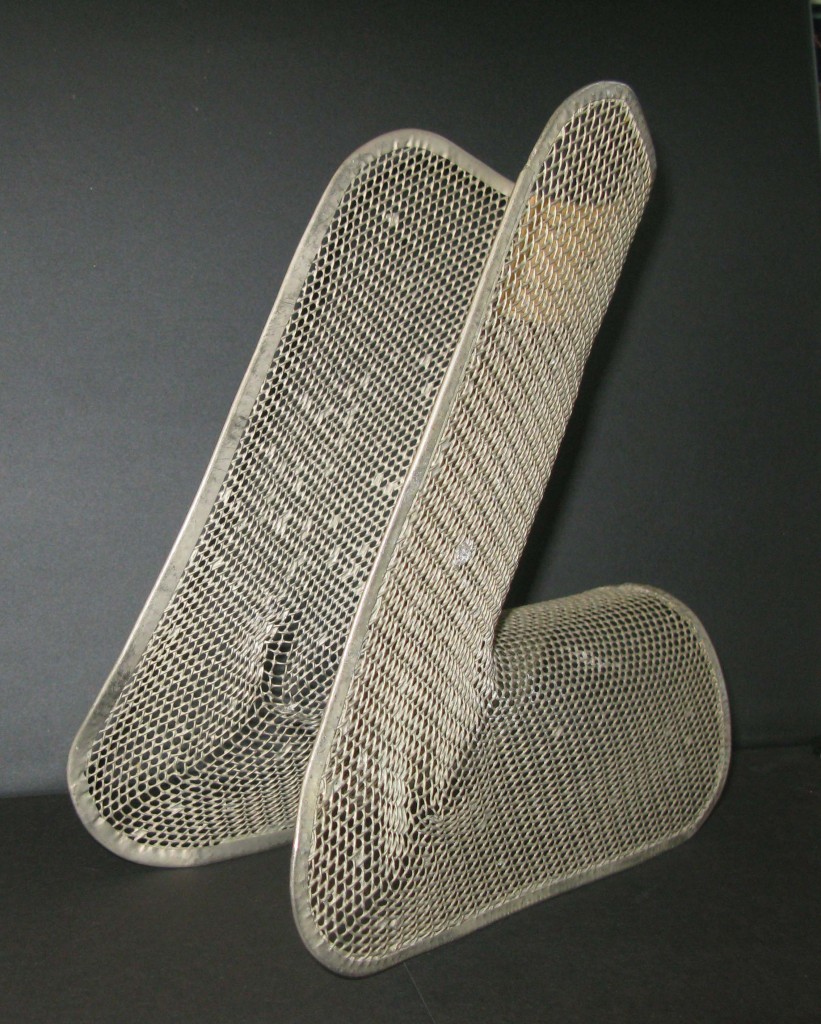 4. A wire mesh splint designed by Revra DePuy, the founder of our operating company DePuy, Inc.  DePuy, Inc., founded in 1895, was the world’s first-ever orthopaedics company.  Before Revra DePuy's fitted splints, doctors used the staves from barrels, among other things, to splint broken limbs.  This one was designed for an arm. 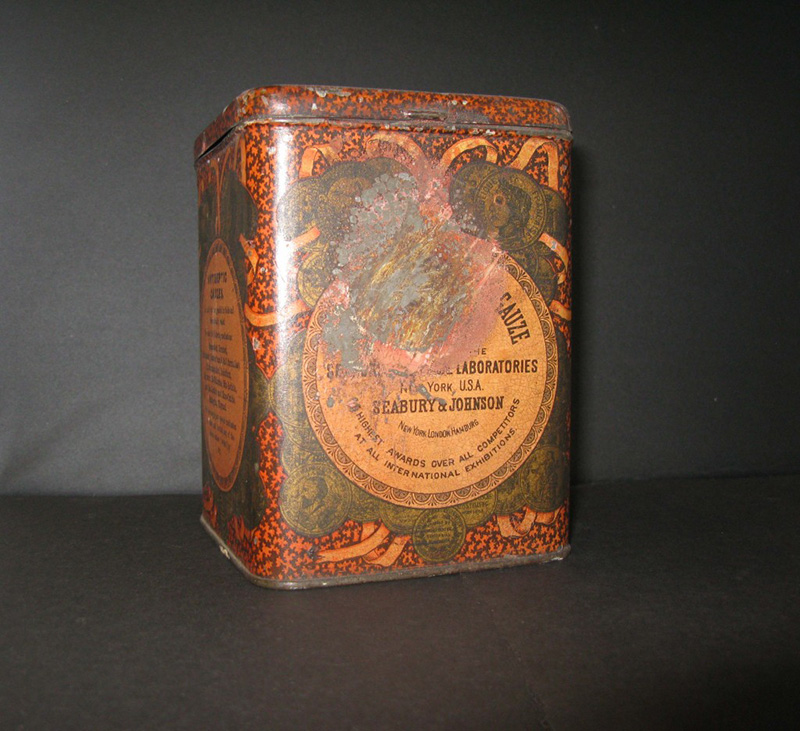 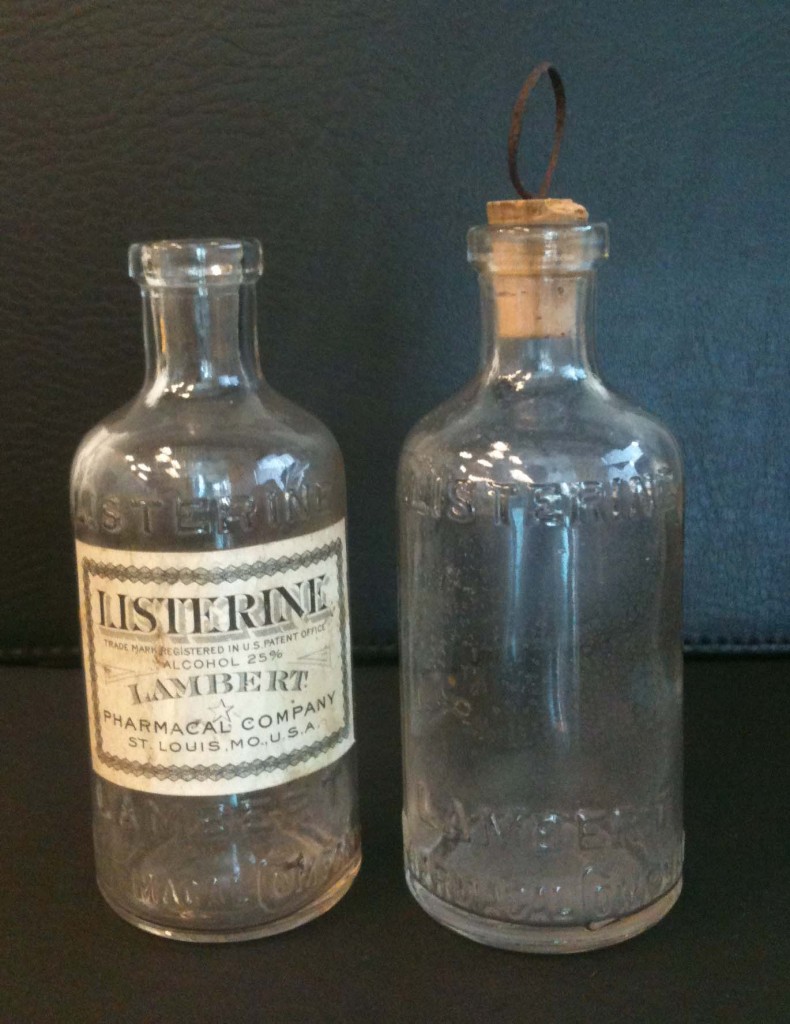 6. Two very old LISTERINE® Antiseptic bottles, circa the very early 1920s.  These bottles are small -- only about four inches in height. 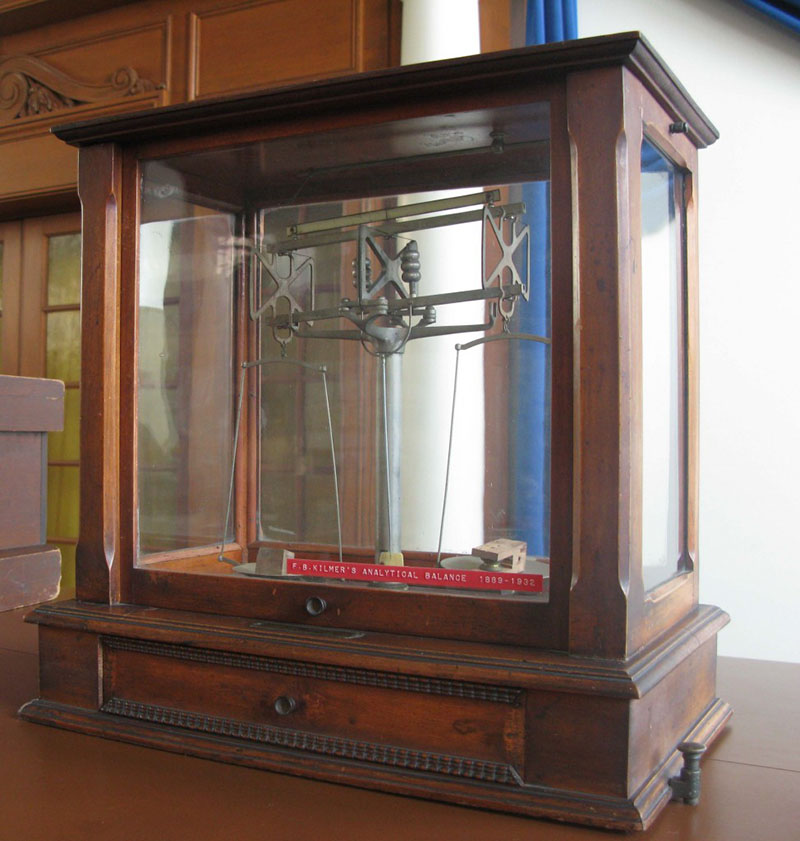 7. Fred Kilmer’s analytical balance, which he used in our laboratories starting in 1889.

8. The Johnson & Johnson factory whistle from 1901, when all of the Company’s operations were in New Brunswick, New Jersey.  It’s said that the whistle could be heard for miles in the towns surrounding New Brunswick. 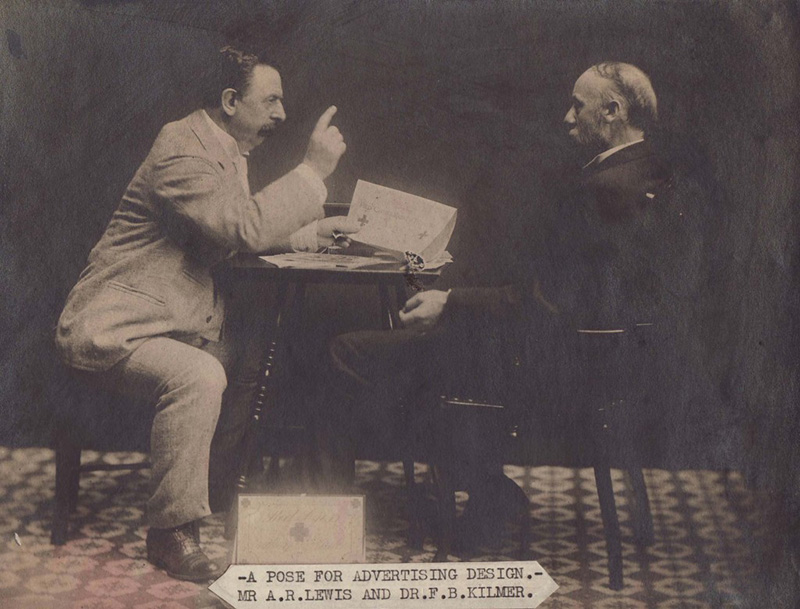 9. The Company’s secretary and head of sales A. R. Lewis (L) and scientific director Fred Kilmer (R) getting creative by posing for a medicated plaster ad over 100 years ago. 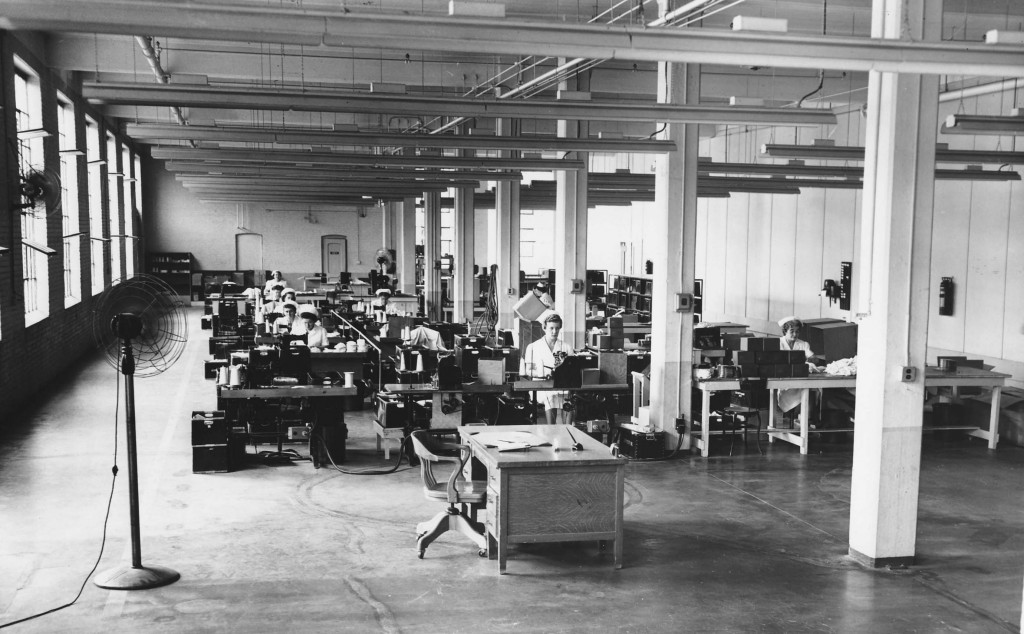 10.  And finally, how did Johnson & Johnson employees stay cool before air conditioning was invented?  Fans!  Here’s a picture of some of our, well…biggest fans from earlier years.

Does anyone out there collect Johnson & Johnson vintage memorabilia?  We’ve shared some of the coolest items in our Company archives.  Which one do you think is the coolest?  And what cool things do you have in your collections?  Let me know!

It's cool to see the history of such an iconic American company. Do you have a museum to house all these memorabilia? If not, maybe an idea to showcase how J&J came to be J&J and also showcase how we have the medicine (and everything encompassing that) we do today.

In reply to by Svetlana

Thanks for the suggestion! We do have a Museum, located at our World Headquarters in New Brunswick, New Jersey. Some day I will have to do a post on the Museum. Our Museum and archives are where I get all of the products, ads, photographs and information to include in the blog!

Here is another "Cool" nursing item from Johnson & Johnson.
http://nursingpins.blogspot.com/2010/07/nursing-history-and-nurse-capping.html

This is so well done and informative. We are all very proud of the J&J Legacy.

I have my own "Museum" of Promotional Pharmaceutical Pens used in the 1980's through 2009. Very funny and cool...guaranteed to bring back memories for anyone who "carried the bag".

I am on the leadership team of a J&J initiative called Supplier Enabled Innovation. Would it be possible to connect as I believe some of the great history and artifacts you have were developed with the help of suppliers. I think it would be great to show that this type of innovation is nothing new, but something J&J has been doing for years. I am based in Skillman and would be happy to come to NB or to talk on the phone. Would you be interested in meeting? Do any days or times work best for you?

Margaret, you have a gift for bringing history alive! I wonder if the Museum is open to those outside of J&J? Would probably bore the pants off the kids, but I'd love it.

In reply to by Helene Molter

Thanks! And great to hear from you on the blog! The Museum isn't open to the public at this point, although we do conduct some tours for people outside of Johnson & Johnson.

This is a wonderful site! Traveling through time with you has been so uplifting as I struggle through my dissertation(the evolution of medical practice in Middlesex County -early twentieth century. I especially enjoy the photos. Thank you

Is it okay if I use a few of these photos in my paper, giving appropriate credit of course?

In reply to by Linda Spinner

I'm glad you enjoy the blog! Please feel free to use some of the photos, with proper attribution to Johnson & Johnson. Please note that, on occasion, I use fully attributed public domain creative commons photos on the blog. I cannot give permission for the use of any of those, just the Johnson & Johnson photos from our archives.

Thank you Terrific! I will certainly provide the proper attributions . Also thanks for pointing me in the direction of another great resource: Robert Wood Johnson: The Gentleman Rebel by Lawrence G. Foster. Although more of a focus on the "General" it provided a lot of valuable text regarding Robert Wood Johnson Senior that I needed.
Linda