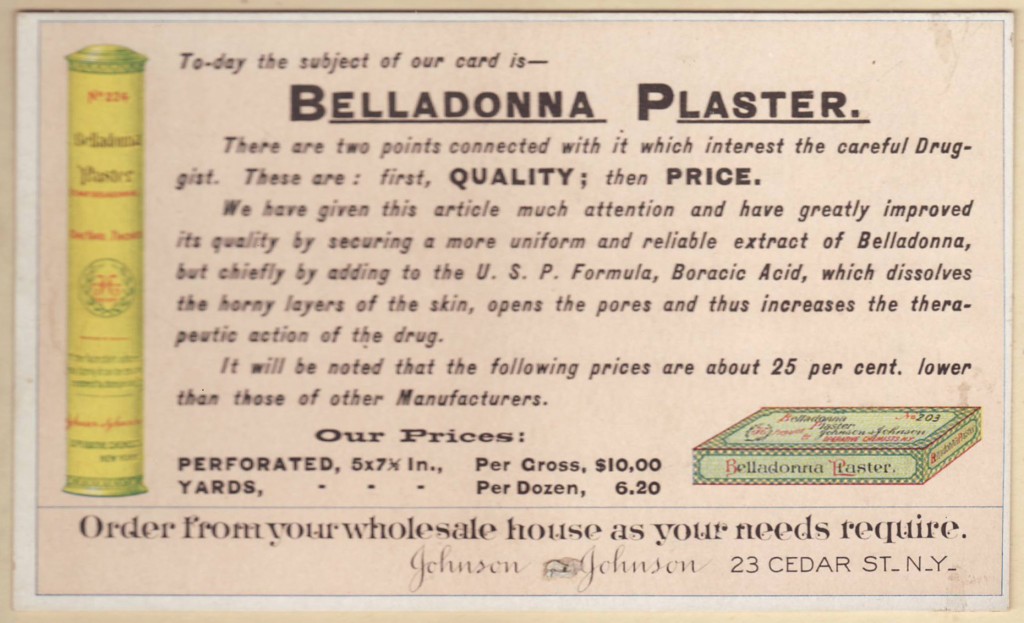 Rare early ad for Belladonna Plasters, from our archives, 1888.

We know Company founder Robert Wood Johnson as the ultimate businessman.  But he also had a hands-on scientific side that started with his training in the early 1860s as a teenaged apprentice in Wood & Tittamer, his maternal relatives’ apothecary in Poughkeepsie, New York, where Johnson first learned to make medicinal plasters.  Johnson went on to spend many hours with his sleeves rolled up, elbow-deep in pails full of ingredients, trying to improve the methods of making one of the 19th century’s most popular health care products -- the medicated plaster.  In 1894, when Johnson & Johnson had been in business for eight years, Robert Wood Johnson wrote an article about what he had learned from his long experience. 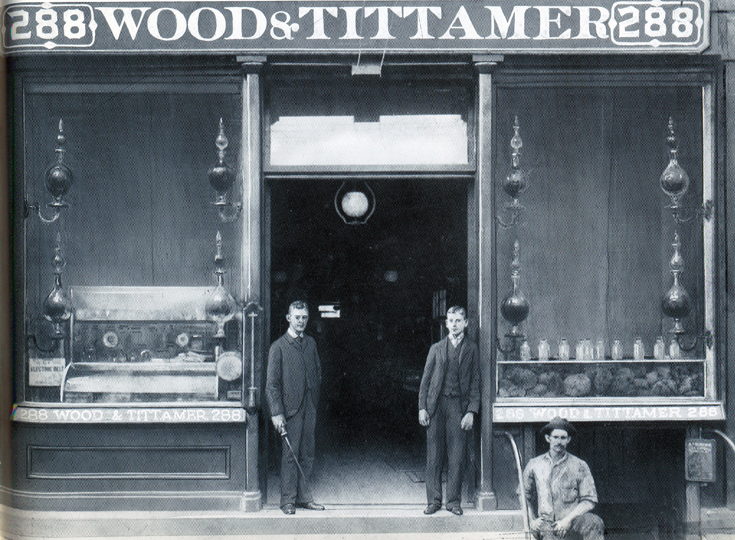 Wood & Tittamer, where Company founder Robert Wood Johnson got his start in health care as a teenager.

Before the Johnson brothers’ improvements, the issues with handmade medicated plasters were many.  The ingredients were hard to work with.  The plasters wouldn’t keep for long periods of time, and the methods of making the rubber flexible frequently rendered the medication inactive.  Writing elsewhere, Robert Wood Johnson said:  “‘Probably no other branch of the pharmaceutical art has been the occasion of so much toil, anxiety and failure and discouragement before any measure or success was met.’”  Describing the frustrations of his years of experimenting with plaster making to improve the product, Johnson went on to say, in his very polite fashion, “‘Expressive expletives could not be restrained.’”  [Robert Wood Johnson, The Gentleman Rebel, by Lawrence G. Foster, Lillian Press, 1999,  p. 13] 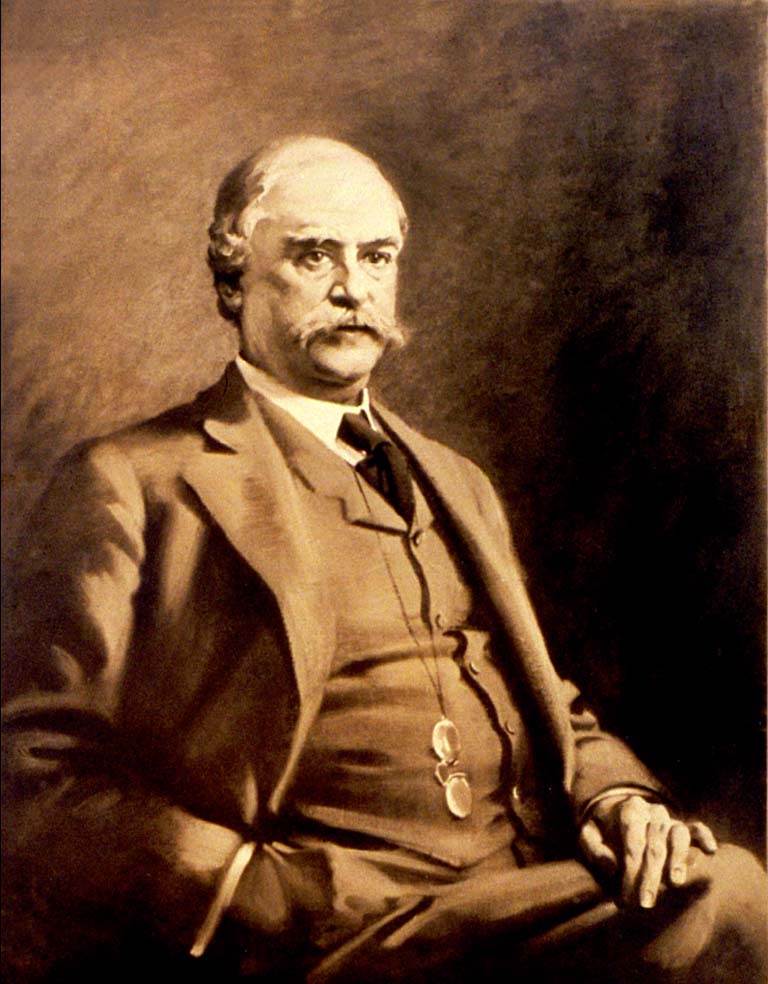 By the time Johnson & Johnson was established, Robert Wood Johnson had solved many of these issues.  He used a different kind of rubber base and found ways to work with the properties of the ingredients, and not against them.  The machinery designed by James Wood Johnson allowed Johnson & Johnson to mass produce these products with improved efficacy, high quality and consistency. 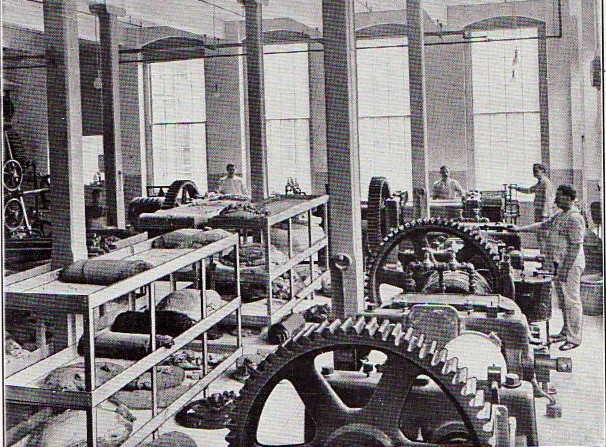 Some of the machinery designed by James Wood Johnson for the manufacture of medicated plasters.

Belladonna plasters in particular had led to much teeth-gritting frustration in the medical products industry, because the heat used in the manufacturing process at that time tended to render the active ingredient inactive.  The person who finally solved that problem through practical scientific experimentation was Johnson & Johnson founder Robert Wood Johnson.  His improvements made plasters more stable and more effective, and they were incorporated into the 16th edition of the United States Dispensatory and written up in a variety of pharmaceutical journals as a great leap ahead.  With those credentials as an expert, and a range of medicated plasters manufactured by Johnson & Johnson, Robert Wood Johnson wrote his 1894 article. 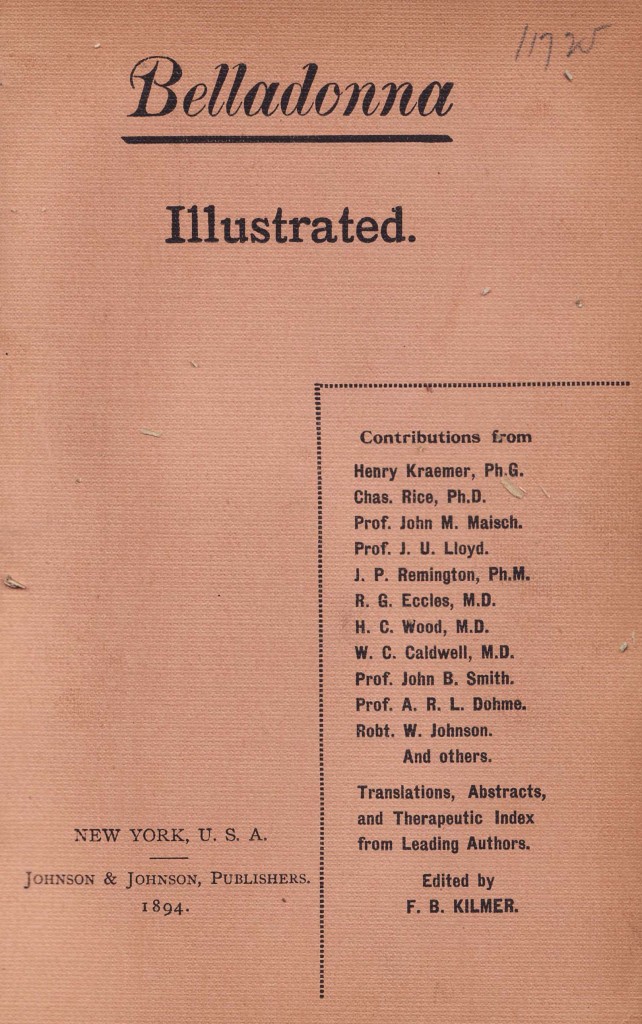 The article appeared in a Company publication called "Belladonna Illustrated, A Study of Its History, Action and Uses in Medicine" that brought together contributions from leading experts including doctors, scientists and academics.  Johnson’s contribution focused on the making of belladonna plasters, and it was titled (not surprisingly), “Making Belladonna Plasters.”  The article is interesting, both for Johnson’s practical scientific knowledge and his no-nonsense writing style.

Johnson began by recognizing medicated plasters as having a sound basis in science.  Let’s hear directly from Johnson in his own words:

“Plasters are such common articles of merchandise that we are apt to think of them as things that are bought and sold by the pound or yard; but, in the compounding and mixing room, problems arise that call for the same judgment and skill needed in all branches of scientific pharmacy.”  [Robert Wood Johnson, “Making Belladonna Plasters,” from Belladonna Illustrated, Johnson & Johnson, 1894, p. 34]

Then, perhaps influenced by his friend the writer Edward Page Mitchell, Johnson launched into a series of quotations from doctors, pharmacists and patients that give the reader the experience of reading dialogue.  Today, we’d probably call that something like “voice of the customer,” but to Robert Wood Johnson in 1894, it was a foundation of solid scientific evidence to back up the points he was making in his article, and it all focused back on the people who used the products and what their needs were.  In his usual plain speaking style, Johnson summed it up: “The patient will tell you that he does not put on plasters for fun, or as a substitute for clothing; he wants to get well.”  [Robert Wood Johnson, “Making Belladonna Plasters,” from Belladonna Illustrated, Johnson & Johnson, 1894, p. 34]

The article is highly technical and goes into great detail, but it’s easy to read because Johnson used plain language to describe the scientific properties of the ingredients and the technical processes he had perfected.  Robert Wood Johnson had learned the health care business through the 19th century career training path of apprenticeship, and his writing reflected that as well as his personality.  If you read the quotes in this post out loud, you can really get a sense of how Johnson spoke.

“To make a good belladonna plaster with any kind of base, is not easy.  It was not accomplished in the ‘good old way,’ when belladonna juice or the leaf itself was ‘melted down’…”  [Robert Wood Johnson, “Making Belladonna Plasters,” from Belladonna Illustrated, Johnson & Johnson, 1894, p. 34]

“The National Dispensatory says ‘temperature 120-130 is required.’  In my experience this heat would greatly injure belladonna, would be disastrous, and good belladonna would be cremated in the mass so that it would never reach the spot where it could do any good as a curative.”  [Robert Wood Johnson, “Making Belladonna Plasters,” from Belladonna Illustrated, Johnson & Johnson, 1894, p. 34]

“Everything put into a plaster which is not an active medicinal agent, or has no use in promoting adhesion or absorption, is simply debris that will fill the pores of the skin with so much dirt, and stands in the way of the drugs being absorbed.”  [Robert Wood Johnson, “Making Belladonna Plasters,” from Belladonna Illustrated, Johnson & Johnson, 1894, p. 34]

“After all the study and experiment in putting rubber into every conceivable shape, one cannot with any certainty tell whether a certain piece of rubber will spoil quickly or not. If the plasters keep the rubber is all right; if the plasters spoil the rubber is not all right.”  [Robert Wood Johnson, “Making Belladonna Plasters,” from Belladonna Illustrated, Johnson & Johnson, 1894, p. 35]

And finally, Johnson’s no-nonsense practicality comes across in his description of the skills needed to make a successful belladonna plaster:

“The operation of mixing and spreading on cloth requires care and skill that comes only with thorough training, one must have quick hands, an eye on the thermometer and quick discernment as to when the proper plasticity is reached.  These with accurately adjusted apparatus guided by a good, clear-headed judgment are pre-eminent requisites in the spreading of a belladonna plaster.   [Robert Wood Johnson, “Making Belladonna Plasters,” from Belladonna Illustrated, Johnson & Johnson, 1894, p. 36]

Although the article in our archives that Johnson wrote was only three and a half pages long, it gives us the perfect opportunity to hear the voice of one of our founders, Robert Wood Johnson.

I understand that this product is available in Germany - where in north america is this product available, if not then where and how to purchase in europe.

In reply to by Betty Arsenijevic

Belladonna Plasters were an historical product made by Johnson & Johnson over 100 years ago, and not a modern product, so they would not be available from any of our operating companies.