How Much Do You REALLY Know About Our Annual Meeting? Re-posted from 2009.

The Earliest Meetings:  Meet Our Shareholders, All Three of Them Johnson & Johnson has had annual meetings of shareholders (or stockholders as they were called then) since 1888 – almost since the beginning of the Company.  At that time, the group of shareholders – the three Johnson brothers – was so small that the annual meeting could have been held in a broom closet. 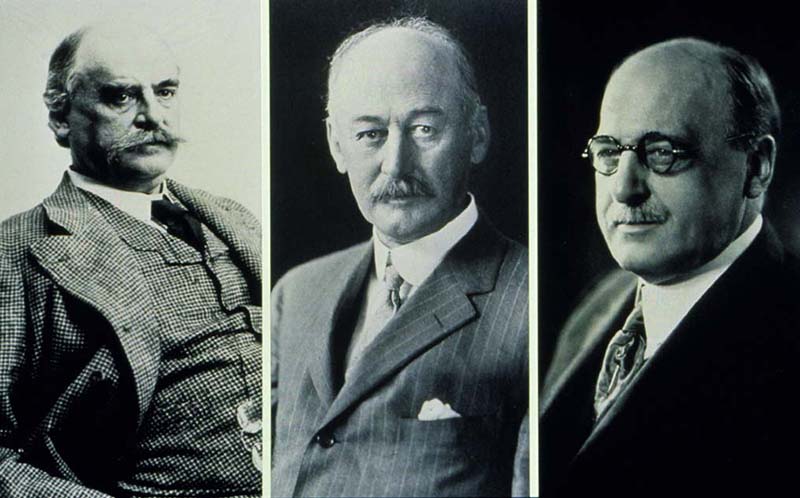 Although Johnson & Johnson was founded in 1886, it was incorporated the following year (in the fall of 1887) with capital stock valued at $100,000, with the three Johnson brothers as stockholders.  Robert held 40 percent of the shares, and his brothers James and Mead held 30 percent each.  The by-laws of the new corporation stated that the Annual Meeting of Stockholders (as it was called then) should be held on the 2nd day of January, and the Secretary of the Company was required to give five days notice in writing to each stockholder to let them know there would be a meeting.

So…When’s the Meeting?
The Company’s secretary didn’t have to write that letter for a few months.  Our first-ever Annual Meeting of Stockholders was held on January 14, 1888 at 4:00 pm in the offices at Johnson & Johnson in New Brunswick.  Oddly enough, that day was a Saturday.  Stranger still, it was just a regular workday back in 1888.  (Work weeks generally stretched from Monday to Saturday, until the passage of legislation setting a 40-hour work week during the Great Depression.)  Presumably bad weather wasn’t much of a roadblock to attendance because two of the three Johnson brothers lived in New Brunswick and could walk to work.   But they may not have wanted to walk to the first Annual Meeting: the winter of 1888 was a notably cold and snowy one (the famous Blizzard of 1888 would occur later that year in March), and our first-ever Annual Meeting took place during a bone-chilling, unusually cold January. 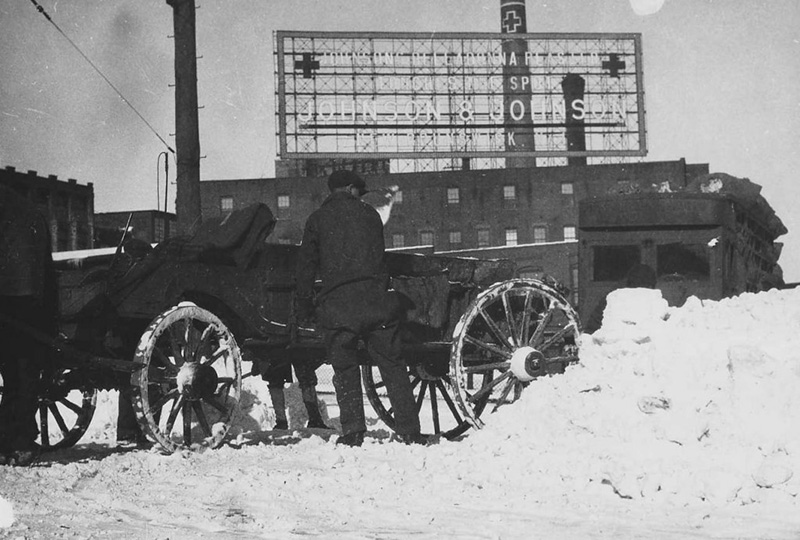 When the Johnson brothers were the only shareholders, scheduling was far less formal, and shareholder meetings were held when needed to elect a Board of Directors (all internal Johnson & Johnson people at that time) or when needed to discuss or consider making an acquisition or an agreement.  That was the case in March of 1892 when Johnson & Johnson held a Special Meeting of Stockholders (all three of them) to discuss whether or not to enter into an agreement with the Papoid Company.   (They voted yes.)

Since the three Johnson brothers were all roughly in agreement about the Company’s goals, the early Johnson & Johnson Annual Meetings were far smoother than those of Robert Wood Johnson’s previous partnership, Seabury & Johnson.  The Seabury & Johnson meetings (with only two stockholders) had been noted for the acerbic written comments made by George Seabury and Robert Wood Johnson in the margins of the meeting minutes, and for the fact that the long-suffering Seabury & Johnson treasurer was often called in to perform the thankless task of break voting ties caused by the deadlocked partners.

The earliest Johnson & Johnson Annual Meetings were always held at the Company’s offices in New Brunswick, starting the tradition of holding them in our founding city that we continue today. 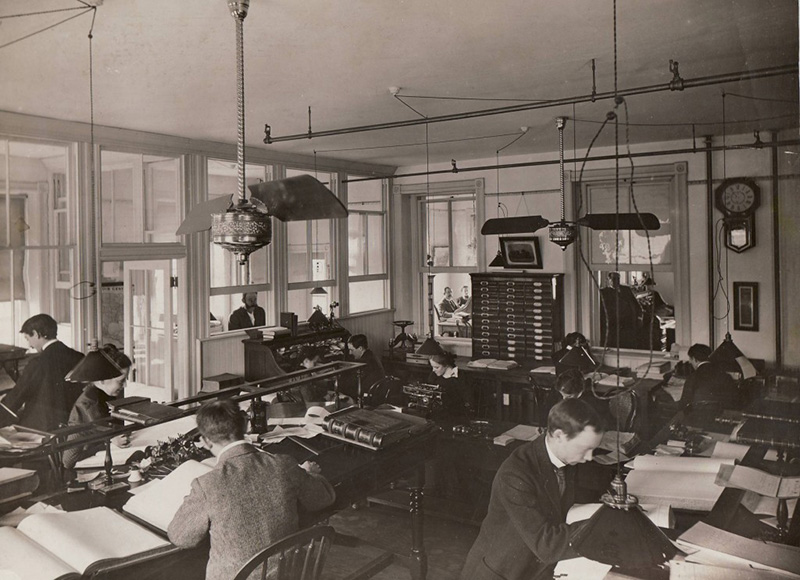 Johnson & Johnson office, 1895, with founder Robert Wood Johnson in office window (at right) next to the clock. 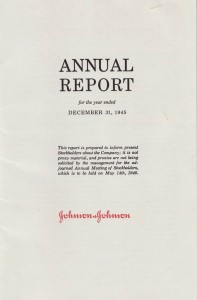 Inside cover of 1945 Annual Report with notification of new date of the 1946 Annual Meeting.

Our archives don’t record the reason for the delay, but 1945 was a busy year for the Company, which was shifting from a wartime production footing back to a civilian one, further decentralizing, expanding its research and manufacturing capacity, and adding new products.  General Robert Wood Johnson summarized the eventful year that had passed in his letter to shareholders, and concluded by thanking employees:

“The men and women of Johnson & Johnson have again made an outstanding contribution to the development of the Company.  1945 was the third successive year in which production and sales have been maintained at their present record levels, and the increasing efficiency of production is a tribute to the ability and loyalty of our men and women under difficult circumstances.”  [1945 Annual Report, Robert Wood Johnson Letter to Stockholders]

From 1947 on, our Annual Meeting has been held in April…even though our modern and always on-time Annual Report comes out in March.

Location, Location, Location
But one thing about the Annual Meeting has never changed, right? The meetings have always been held in New Brunswick.  Well…not exactly.  From 1888 to 1957, the meetings were small and were held in New Brunswick at the Company’s headquarters.  But with the 1957 opening of the Eastern Surgical Dressings Plant (or ESDP, as we used to call it) in North Brunswick, it was decided to hold the Annual Meeting there, both to show off the new state-of-the-art facility, and because it had more space.

The Old Eastern Surgical Dressings Plant in North Brunswick, N.J.  Home of our Annual Meetings from 1957 to 1964.

The first Annual Meeting held at ESDP had about 30 attendees.  In his role as chairman of the Company, General Robert Wood Johnson conducted the meeting -- a role that has been continued by every Chairman and CEO of Johnson & Johnson since we went public in 1944. 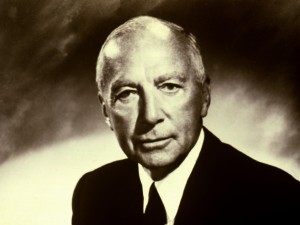 It was at one of the ESDP Annual Meetings that an attending shareholder gathered up his courage and asked General Johnson why he had put shareholders last in Our Credo, the one-page statement of corporate responsibility that Johnson had written in 1943, and had printed in the Company’s 1948 Annual Report.  Johnson gave the famous reply that if all of the other responsibilities in Our Credo (to doctors, patients, customers, consumers, then employees, then to the community) were performed well, then the shareholders would be well-cared for.  (And as Johnson liked to remind people when they asked that question, at the time, he himself was the largest shareholder...which probably served to end the conversation.) 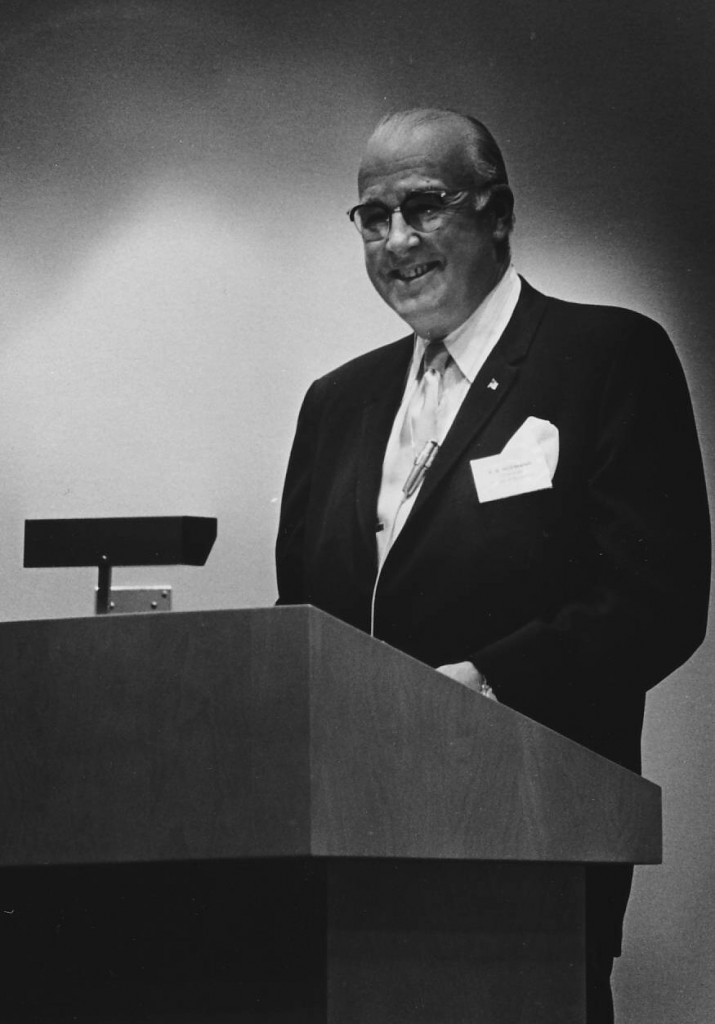 The meetings were held at ESDP until General Johnson retired and Philip B. Hofmann became chairman.  The 1964 meeting (the first chaired by Hofmann) was held at one of the Johnson & Johnson operating company buildings in Raritan. 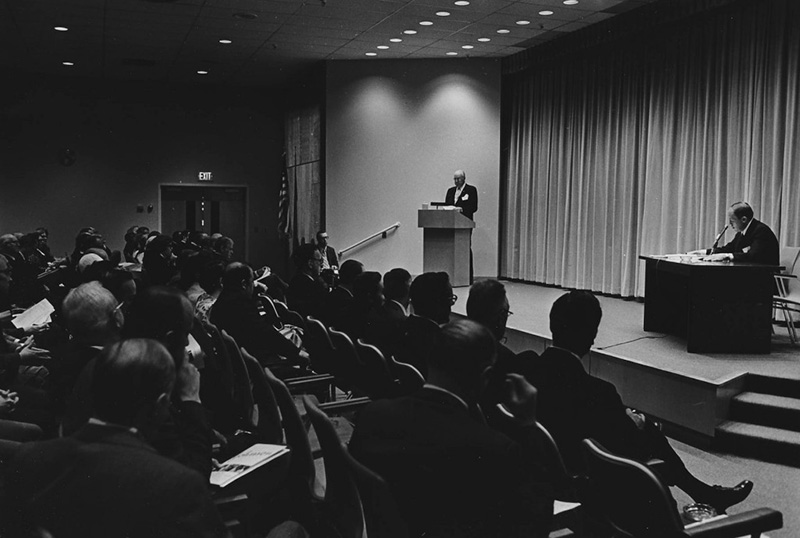 Hofmann’s meeting theme, which he continued until his retirement, was to take the audience on virtual a trip around the world and report on the progress of the worldwide affiliate companies.  This set the stage for our current meetings, which report on the state and the progress of the Company throughout the world.  The meetings remained at the Raritan location until they moved back to New Brunswick in 1983…where they continue today after starting here on a Saturday in the dead of winter 122 years ago.

Many thanks for to all whose efforts produced this most interesting article! As a long time J&J employee, I truly enjoy reading articles about the history of this wonderful company.

It's great that J&J employees have always lived by a credo that was created so many years ago and probably the reason the company is so well respected around the world.

As J&J's Corporate Secretary, I love re-reading this post, especially every April right before the J&J Annual Meeting. Thanks!