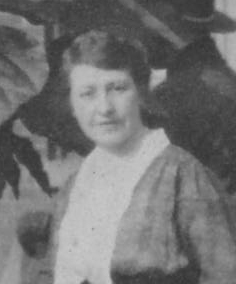 One of Our Early Employee Volunteers

Johnson & Johnson Family of Companies employees all over the world have a long tradition of volunteering in the community.  It reflects their feelings of responsibility to the communities in which they live and work, and it forms the basis of the third paragraph of Our Credo.  One thing that very few people know is that our tradition of employees volunteering in the community goes back over 100 years…and our earliest records show that it was started by women employees.  So, how did it start? 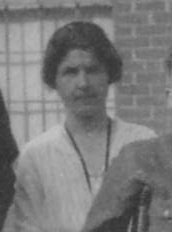 Early Johnson & Johnson Volunteers in the Community
The earliest records we have of employee volunteers are from the Laurel Club, an organization of women employees that was started in February of 1907.  The Laurel Club Charter stated:  “The object of the club is to create a center where all may find opportunities of enjoyment and education.”  [Laurel Club Charter, from our archives, 2/14/1907]  From the beginning, volunteering and philanthropy were mentioned.  Nellie R., the Laurel Club president, noted that fundraising in the first year raised money to buy a bed for the General Hospital in New Brunswick, and that proceeds raised from a variety of club activities also paid for a holiday party and gifts for the 100 children at St. Mary’s Orphanage and the Industrial Homes in New Brunswick. 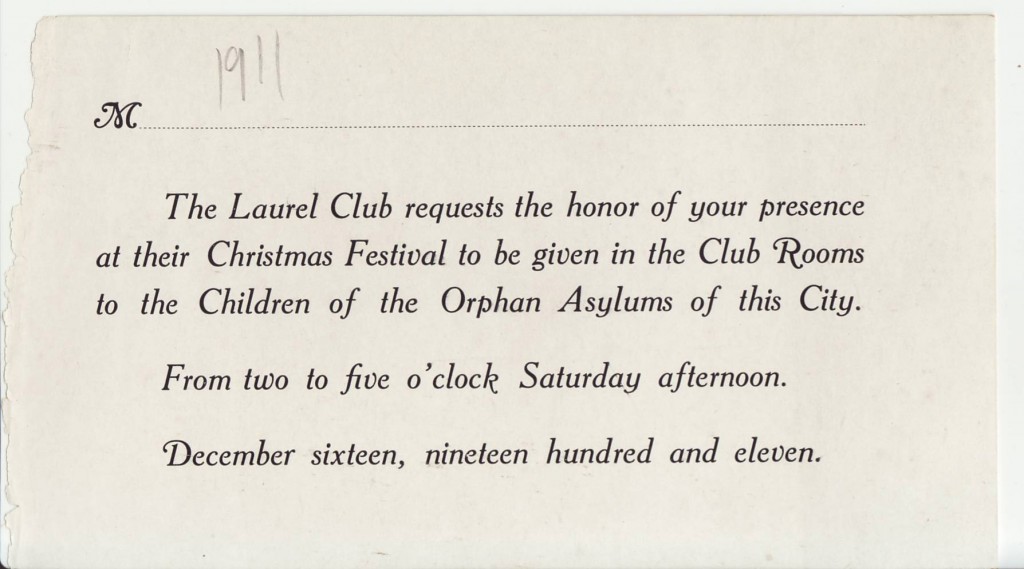 Besides toys, the Laurel Club volunteers also bought the children hats, mittens, sweaters and other warm clothing.  Nellie R. noted that “All bills for this affair are paid and a balance of $23.00 invested in the J. & J. Savings Bank, to start another of the same nature or perform any act of kindness the club members may deem advisable.”   [Laurel Club Charter, from our archives, 2/14/1907] 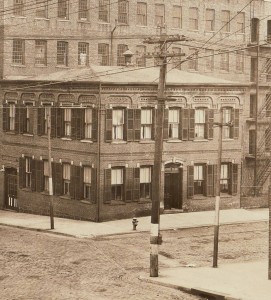 The Laurel Club Building – on the corner of Hamilton and Nielson Streets in New Brunswick  – site of volunteer well baby clinics.

Well baby clinics were another early volunteering effort from the Laurel Club members.  The clinics were held for New Brunswick mothers every Thursday from 4:30 to 6:30 pm, and the idea was to keep babies well in a population that included many recent immigrants who may not have had access to regular medical care.  The Thursday clinics had a doctor and a nurse on staff.  The babies were weighed and measured every week, and the doctor advised the mothers about feeding, clothing and more.   It was stressed in the July 8, 1919 club correspondence that “NONE except the DOCTOR will be permitted to give medical advise [sic].”  [Laurel Club correspondence, July 8, 1919].  While the doctor advised the women who brought their babies to the clinic, Laurel Club members sat and talked with the mothers and kept the babies amused while they waited to see the doctor.  Viahnett S., the Laurel Club manager in 1919 wrote:  “…to save even one tiny baby will be a splendid reward for the summer work.”  [Laurel Club correspondence, July 8, 1919]. 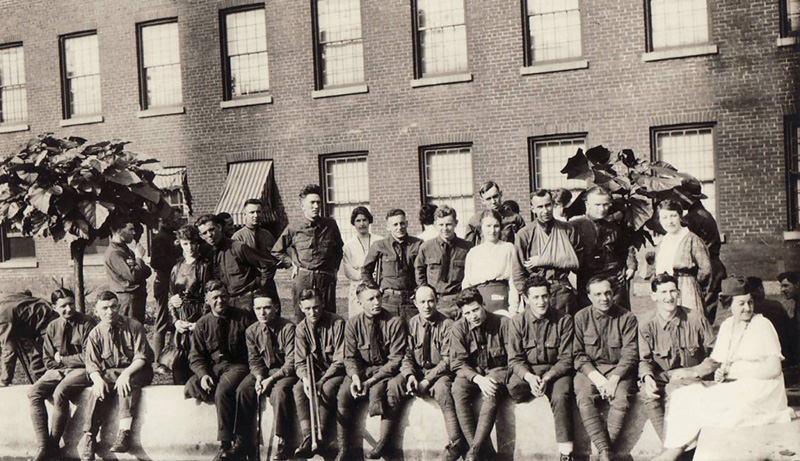 In 1919, after World War I had ended, women employees in the Laurel Club volunteered their time to help wounded soldiers who were being rehabilitated at the U.S. Hospital in Colonia, New Jersey.   Club members brought a number of the soldiers who were able to travel to New Brunswick, took them to a vaudeville show and a huge dinner at the Laurel Club.  (If anyone’s interested, they had a turkey dinner with mince pie and ice cream.)   THE RED CROSS MESSENGER noted that it would be the first of many outings to cheer up the soldiers during their extended stay at the hospital.  During the war, Laurel Club volunteers, combined with the Company's male employee Glee Club (a singing group), had entertained the soldiers stationed at Camp Raritan with singing and dancing. 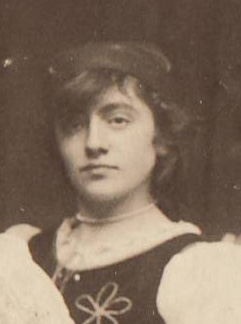 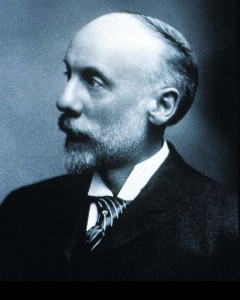 Even scientific director Fred Kilmer volunteered, using his expertise in science and public health to teach classes for employees on health, hygiene and other topics.  Kilmer’s classes on hygiene focused on contagious diseases and the means of combating them.  In the days before antibiotics and many vaccines, that was crucial knowledge.  The class even had a written exam that participants had to pass. 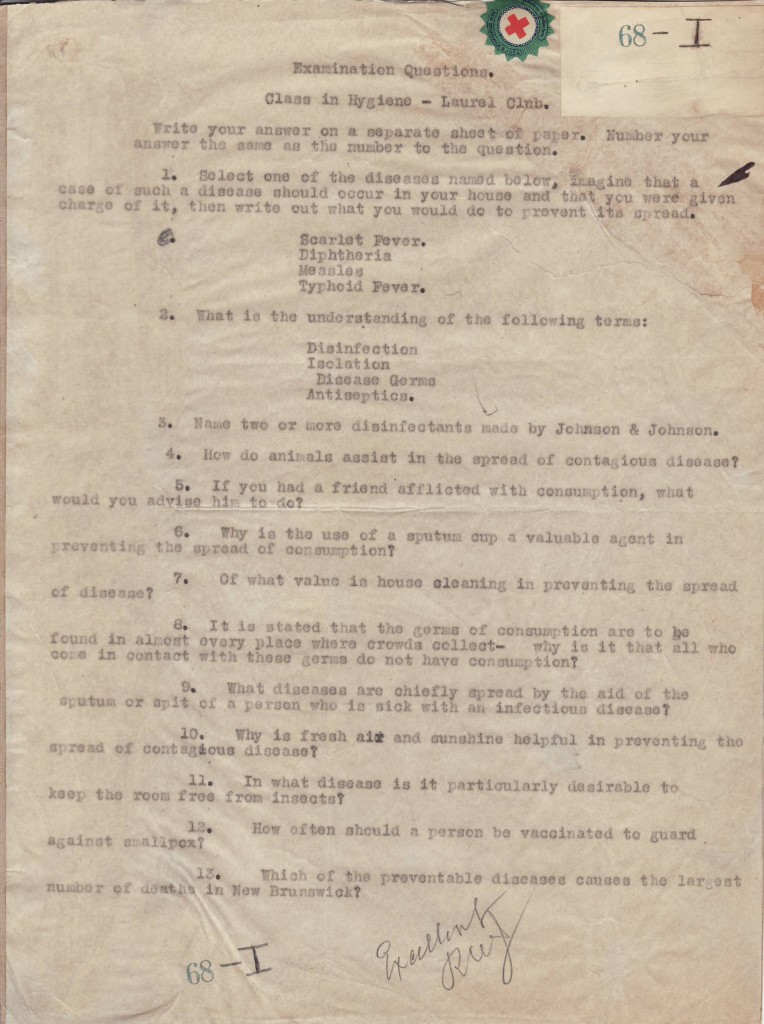 Fred Kilmer's written exam: you had to study if you took his volunteer classes

Some of the topics covered were germs, disinfection, isolation and antiseptics, as well as the role of house cleaning, fresh air and sunshine in preventing the spread of disease.   Employees had to answer an essay question on how they would prevent contagious disease in their homes (they could choose from scarlet fever, diphtheria, measles or typhoid).  They had to name at least two disinfectants made by Johnson & Johnson (in those days, the Company made a wide variety of public health products), distinguish insect-borne diseases from those spread by animals, and discuss how frequently a person should be vaccinated to guard against smallpox.  The exam was very serious business, as was the class. 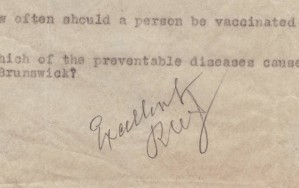 Close up of bottom of the Laurel Club hygiene class exam, with handwritten comment from Robert Wood Johnson

Volunteerism was encouraged by the Company at the highest levels.  Company founder Robert Wood Johnson encouraged his children to give back to the community, including taking flowers to patients in New Brunswick hospitals, and co-founder James Wood Johnson’s family members helped employees make and roll bandages to help wounded soldiers during World War I.

Another way employees volunteered was through military service and in my next post, I’ll talk about how that started, and led to a tradition that we still have today.

Thanks for sharing, brilliant piece of history.

Personal note: I am a community person since many years, and clearly believe in people being active in communities: "We are ..."

JNJ related note: It makes me really proud working not only for a company contributing from the start to communities, but also knowing that this is actively ongoing. I guess you might have heard of the "The Sikiliza Leo Water Project" for which many initiatives for raising funds were created by employees of Tibotec (part of the JNJ family), e.g. selling homemade Belgium waffles, women joining a marathon, organizing a mini soccer tournament and much more ... see page 9 in the following document ... http://www.tibotec.com/content/backgrounders/www.tibotec.com/SikLeo_brochure.pdf

I really enjoyed reading this story it was great a story.

Wonderful piece of history. I love to read history facts about J&J. I've been working for the Janssen Ortho Site in Puerto Rico for the last 21 years. I am very proud to be a J&J employee.

WOW i am part of of the community committee here at EES (JnJ) @ Juarez, Mx. and i love to see that we are not the only ones and even more that this started so many years ago. Here at the plant we are so proud of how volunteers have increased though out the years and how the activities have been accomplished. This has been going from providing milk for newborns for mothers that have little resources and/or single mothers to building a house, yes, you have heard correctly, we used to build two houses a year for families with very limited resources. I can tell you that this activities are very popular in the plant so as very pleasant activities

I have worked for McNeil for 26 years. McNeil has always instilled on all it's employees the successes that come along with volunteering.
I have volunteered for 5 years as a Hospice worker in my community.
I am a proud employee of Johnson & Johnson

It's great to be contracting with a company that cares about the people within the communities they live. My experience of walking in the 3-Day, 60 mile Susan G. Komen walk in Philadelphia made me really understand how much it means to help others who are suffering from diseases such as breast cancer. The support received from the people that were watching us walk throughout the local streets of Manyunk, Chestnut Hill and other Philadelphia areas was amazing and they really made you feel like a hero and that your efforts were making a difference! Walking with the survivors and hearing their uplifting stories was just incredible!