The Johnson Brothers and the Typewriter

If things had turned out differently for James Wood Johnson and Edward Mead Johnson, two of the three brothers who founded Johnson & Johnson, they might be known for making not the first mass produced sterile surgical dressings and sterile sutures, but typewriters.  Typewriters?

An earlier post talked about Seabury & Johnson, older brother Robert Wood Johnson’s partnership, a well-respected medical products business of the late 1800s.  James and Edward both had joined Seabury & Johnson, but the increasing disagreements between the partners -- Robert Wood Johnson and George Seabury -- began to take their toll on the business.  Part of those disagreements stemmed from the fact that Robert Wood Johnson, inspired by seeing Sir Joseph Lister speak about antiseptic surgery in 1876, wanted to branch out into making the first mass produced sterile surgical dressings and sutures according to Lister’s methods.  George Seabury wanted to concentrate on Seabury & Johnson’s tried and true medicated plaster business instead.  In 1885, the partnership was dissolved, and the Johnson brothers were temporarily out of the medical products business.  Robert was constrained from entering the field for 10 years as part of his agreement with George Seabury. 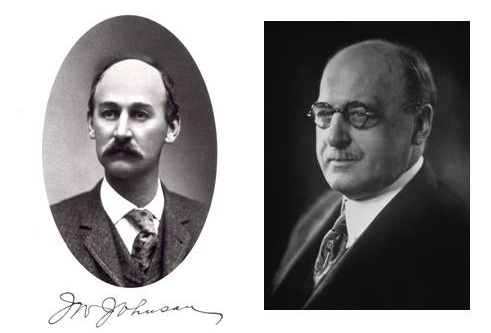 So where do typewriters come in?  Edward Mead Johnson and James Wood Johnson had become interested in the new business machines industry, and they had formed a partnership with typewriter pioneer and promoter George Washington Newton Yost, whose American Writing Machine Company manufactured a typewriter called the “Caligraph.”  Yost was one of the key figures in the promotion of that new technological marvel, the typewriter, and had convinced arms and sewing machine manufacturer E. Remington & Sons, looking to diversify, to start mass producing typewriters.   In the late 1800s, typewriters came in many different shapes, sizes, and varieties, with many different methods of operation, and were as wildly innovative as smart phones are today. 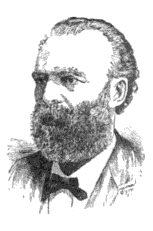 The Caligraph was the first major competitor to the Remington typewriter.  This website has some great photographs of the Caligraph (which is highly valued by typewriter collectors), as well as an ad for the American Writing Machine Company in which James Wood Johnson and Edward Mead Johnson had invested their savings. 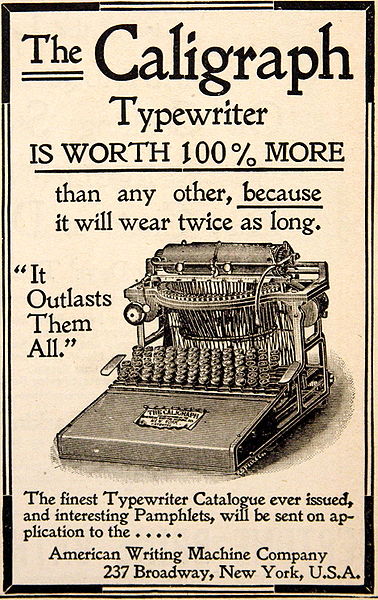 The Caligraph writing machine featured a few innovations that Yost – and the Johnson brothers – hoped would set it apart from the Remington typewriters.  It had a non-smudging ribbon with an India-rubber base, something that no doubt appealed to engineer James Wood Johnson, who had designed and built machinery at Seabury & Johnson to mass produce India-rubber based medicated plasters.  The Caligraph initially could type only capital letters, but later extra keys were added so that it could type both capital and lower case letters – using separate keys for each.

Unfortunately for the two Johnson brothers, Yost became involved in a patent dispute with Remington over the Caligraph.  Yost’s legal battle with Remington ended the writing machine business as a viable alternative for Edward Mead Johnson and James Wood Johnson, who lost their investment and all of their savings.  They decided to return to the medical products field, where their interests and abilities were and, in 1886, they borrowed $1,000 to start Johnson & Johnson.  As soon as Robert Wood Johnson was free of his obligations, he joined his brothers, adding his business expertise, his ideas and some much needed capital. 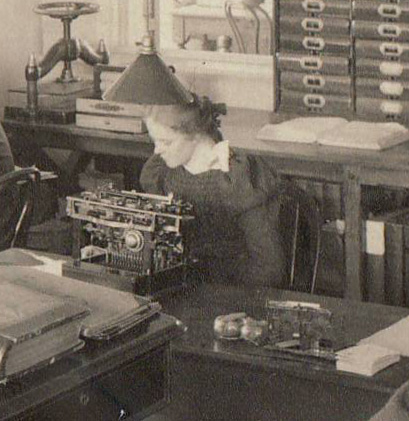 Employee in the Johnson & Johnson office in 1895, using a typewriter.  Is this a Remington?  A Caligraph?

Despite – or maybe because of -- James Wood Johnson’s and Edward Mead Johnson’s experiment with the writing machine business, Johnson & Johnson was an early adopter of typewriters in its offices, putting them to use within a year of starting the Company.  Three quarters of a century later, Johnson & Johnson put in its first computer, with the installation of a massive IBM punch card computer in one of its facilities and distribution centers, but it wasn’t until the 1980s, a century after Johnson & Johnson started using typewriters, that the Company started to replace that old technological marvel, the typewriter, with a newer one— personal computers -- in its offices.

By the way, if there are any typewriter experts out there who can identify what kind of typewriter our employee from 1895 was using, please let me know through a comment on the blog!

Thanks, Dino! I kind of thought it looked like the Densmore on the Typewriter History Museum site too.

Margaret, PCs really did not become the norm at J&J until the very late 80s / early 90s. The predominant office publishing device at J&J in the 80's was the Wang word processing system.

Thanks for clarifying that! I had forgotten about that interim step between typewriters and what we have now!

The typewriter in the 1895 photograph is definitely a Remington,not a Densmore. Identifying the model # is made difficult by only showing the back, but It is most likely a # 2, but it could be a # 6 (introduced in 1893).

The story about the Johnsons and Yost is interesting. It is not clear why the brothers lost their investment because the American Writing Machine Co. continued to exist and make typewriters for many years after the law suit. The settlement of the claims with Remington would not have necessarily effected their investment.

I agree with Peter, the typewriter is a Remington mod 2 or 6