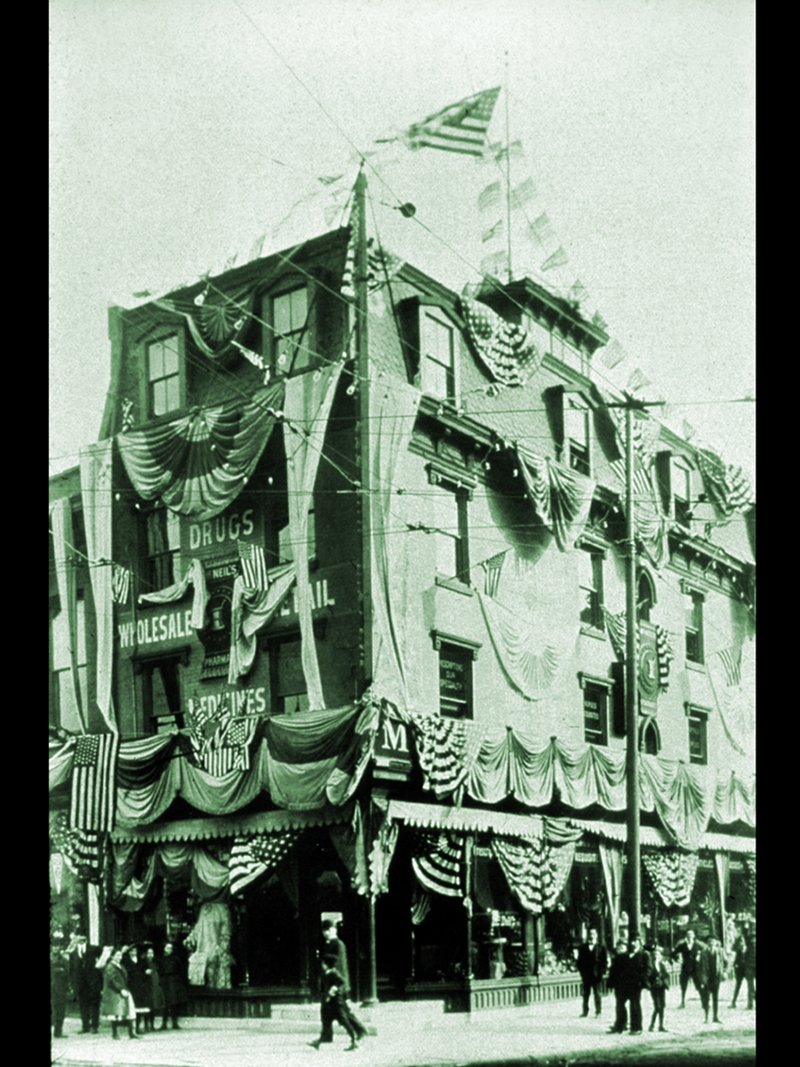 The Origins of our McNeil Business -- the Mc Neil Family Pharmacy

Retail pharmacies have been important in Johnson & Johnson history for a number of reasons.  Before the days of supermarkets, they were the places that sold our products to consumers – from medicated plasters to Lister’s Dog Soap to JOHNSON’S® Baby Powder to BAND-AID® Brand Adhesive Bandages.  But retail pharmacies are also a big part of our history in another way:  if it hadn’t been for them, Johnson & Johnson – and some of its operating companies – might not be here at all.  Why is that?  Because their founders all got their start as clerks in retail pharmacies, which gave them a lifelong interest in health care.  Company founder Robert Wood Johnson the first and Revra DePuy are two examples.  A third example is the former McNeil Laboratories, which joined the Johnson & Johnson Family of Companies 50 years ago this year, and helped establish one of one of the Company’s three business segments.

In the 1950s, the Johnson & Johnson Family of Companies was primarily centered around consumer products and hospital products (those included sutures, dressings and dental products).  The Company also had what it called “commercial products” like non-woven fabrics that were sold to be used in industry, and other products such as tapes (duct tape among them!).   In the late 1950s, the Company’s senior management concluded that in order for the Johnson & Johnson Family of Companies to continue to grow and evolve with the evolution of health care, it should expand into pharmaceutical medicines…and they started looking for a company they could acquire.  Strangely enough, General Johnson, who was usually so farsighted, initially resisted.  His resistance was due to worry that the culture of Johnson & Johnson – the emphasis on Our Credo and on responsibility to others – could be diluted by acquiring and absorbing another organization.  So the Company’s senior management began to look around for a company that not only made pharmaceutical medicines, but that had a similar value system.

The Company already had a small presence in the pharmaceutical area with the Ortho Research Foundation, starting in the 1930s.  It had led to an affiliate company managed at the time by Philip Hofmann (who would go on to succeed General Johnson as chairman and CEO of Johnson & Johnson in 1963).  Hofmann and others pointed to the success of the Ortho Research Foundation’s past director, Dr. Philip Levine, who had discovered the human Rh blood factor – a huge breakthrough that would eventually lead to RhoGAM®, the product that, decades later, is still the treatment for hemolytic disease of the newborn.  Finally, General Johnson agreed to go along with an acquisition, provided it was a good fit with the culture and values of Johnson & Johnson. 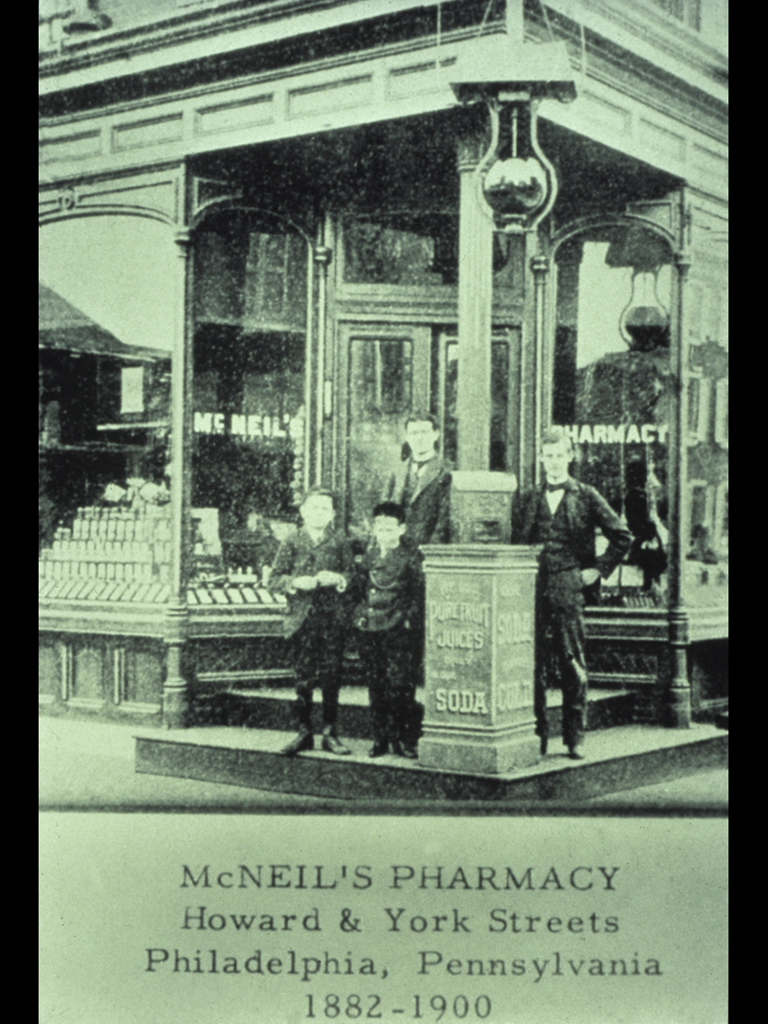 In 1959, the Company’s management found what they were looking for and acquired McNeil Laboratories Inc., a successful business that had started seven years before Johnson & Johnson was founded.  In 1959 McNeil was still family run company, specializing in medicines for sedation and muscle-relaxants.  Its most famous product would go over the counter just a year later. 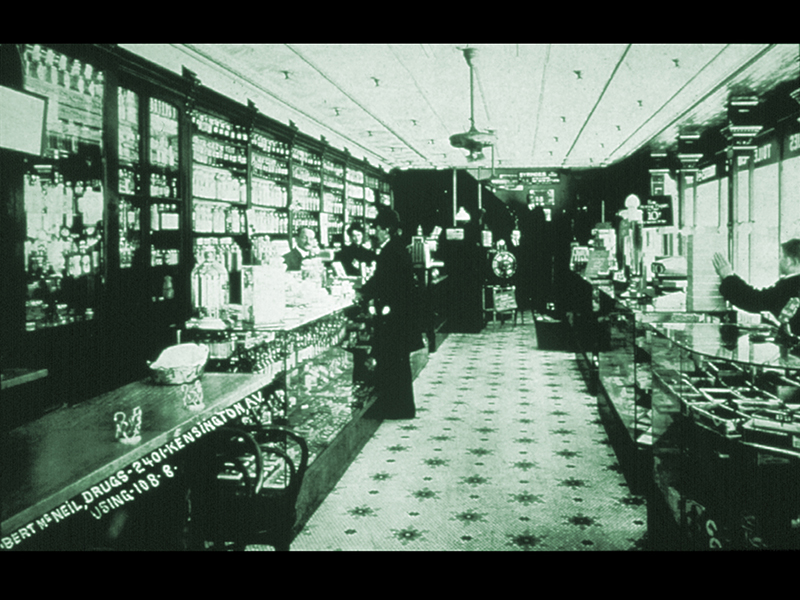 The McNeil family business dates back to March 17, 1879, when Robert McNeil, a 23 year old recent graduate of the Philadelphia College of Pharmacy and Science, bought (what else?) a retail drugstore in the Kensington section of Philadelphia for the small fortune of $167.  McNeil’s drugstore came with furnishings, an inventory of medicines and a soda fountain, a popular addition to pharmacies since the 1850s.  (Interestingly enough, soda fountains were originally installed strictly for medicinal purposes, and their original carbonated tonic concoctions – before they morphed into harmless places to get a soft drink -- would be considered quite alarming today.) 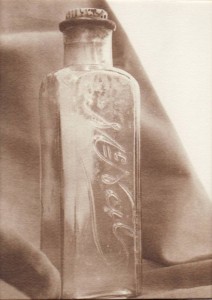 A bottle from the McNeil family pharmacy, with "McNeil" embossed on the side of the glass

The McNeil drugstore did well, and by the time McNeil’s son, Robert Lincoln McNeil, took over, it had added a small manufacturing laboratory and doctors’ supply business. In 1914 both McNeils – father and son – formed a partnership called the Firm of Robert McNeil.  For eleven years they ran it as both a retail store and a manufacturing operation, but the manufacturing side did so well that in 1925, the McNeils discontinued the retail part.  In 1933, they incorporated their business as McNeil Laboratories, Inc., and in 1955,   Robert Lincoln McNeil retired and his sons took over the business.  Just four years later, the brothers and their historic business would join the Johnson & Johnson Family of Companies. 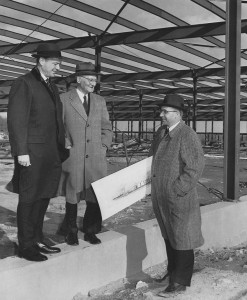 Robert Lincoln McNeil (center) and his son Henry McNeil (left) talk to an architect during construction at Fort Washington, PA

With the 1959 acquisition, the two McNeil brothers joined the Johnson & Johnson Board of Directors:  Robert McNeil: 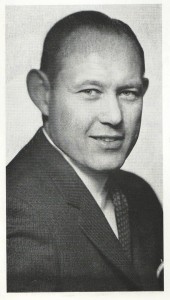 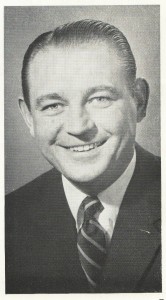 Here’s what the Johnson & Johnson Bulletin said in February, 1959:

“The acquisition of McNeil is recognized as an important step in Johnson & Johnson’s long-term program for the development and marketing of medicinal, surgical, and diagnostic products for the medical profession.  McNeil’s fine management team has built research, manufacturing, and marketing organizations which greatly strengthen and complement the Johnson & Johnson corporate family.”  [Johnson & Johnson Bulletin, February, 1959, p. 7] 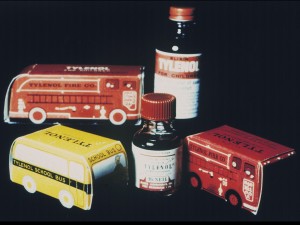 That same year, the Company also acquired Cilag Chemie, a small Swiss pharmaceutical company.  And just two years later in 1961, to further strengthen its presence in this new business area, Johnson & Johnson would acquire a small Belgian firm led by one of the most creative and prolific research scientists of the 20th century: Dr. Paul Janssen.

The precedent of only acquiring companies with value systems compatible with Our Credo still remains in place today.  It’s one of the traditions started by bringing in the McNeil family’s historic business 50 years ago this year.

I am thrilled that we have captured so much of the history of johnson & Johnson with accompanying photos. It provides so much context to how we evolved and grew as a company. Keep publishing these very meaningful stories!

This nice story gives a useful perspective on the history of the company and the business. Thank you

I am learning so much from all the articles you publish about the history of our company. I am always looking forward to the next installment. Thanks for all the research you do, and the wonderful stories you bring to us. Marcia

The stories are very educational and shows the resilency of our Credo.

I grew up near the McNeil Labs facility in Ft. Washington. I had no idea it was so old. I thought it was built in the '70's. Can you tell me the age of that photo with the architect? I am curious to know how long it as been there. Much of the land around the facility was called Orchard Lane Farm and the original farmhouse is still standing as a private residence. (It was built in 3 sections dating back to the 1700's.) For a brief time in the 80's and 90's a property adjacent to the labs was a farm with cattle, pigs, etc.

The McNeil buildings in Ft. Washington are not actually that old. The original McNeil business was in Philadelphia, starting as a family pharmacy. You can see that in one of the photos of the pharmacy in this post: it gives the address as Howard and York Streets in Philadephia. They moved out to Fort Washington much later. I think they made the original move out there somewhere around the time McNeil became part of the Johnson & Johnson Family of Companies (late 1950s), and other construction there dates from the 1970s. I will have to look through our archives to get exact dates.

I wish I had known about this site earlier. This is a great introduction to the company for every new employee. Great job by all who contributed to the gathering and presentation of this historical information. Thank you!

The Ft. Washington facility was designed by Vincent G. Kling, a Philadelphia firm that my father worked for from 1950-1973. I believe the facility was completed in 1969 and the Project Architect was Walt McDonald (?). I do not recognize the architect in the photo. Walt was taller and died of a heart attack in the early 1970s.
Sorry to hear about quality control issues closing the plant and the 300 people who will lose their jobs.

I remember checking out old pharmacies on the internet, and seeing what they were, I kinda wish they were around. It was like a bigger and better convinience store with the multiple items for sale.

The pharmacies are definately something I got to check out.

I Recently found that same.McNeil pharmacy bottle thats in this article. i was.curious.if it had any type of value.. which i have placed in a curio to admire..

In reply to by Jacqueline E

How great that you found an historical McNeil pharmacy bottle! I don't have any information regarding its value, but there are a number of bottle collector websites that can give you an idea of rarity/value.

Hello, To whom it may concern...
I was on your web site here reading about McNeil Labs. and Tylenol with its O.T.C. Sales History...Well, I have a very interesting addition to the Tylenol story if you would be interested in learning it.
My Father, John J. Castellano was employed by McNeil labs from 1960 to 1965 in the NY metro area as a Professional Service Representative and he had quite a large part in the success of this new and emerging product, Tylenol. (in an Aspirin dominated market).
I was here looking for the title of a officer of McNeil Labs in June of 1964. Because I have a letter here in correspondence with my Dad with a Mr. D.D. Horrocks. who I think was at some level in charge of retail sales division?
I would really like to speak to the person who would take an interest in this story. I also have other letters that might add to the already interesting historical pharmaceutical story of McNeil Labs and Tylenol...
You can reach me via Email.