Some of the most beautiful and appealing ads in the history of the Johnson & Johnson Family of Companies are the historical ads for JOHNSON’S® Baby Powder.  One of the most popular of those ads – and still a favorite today -- is the Wonderful Mother ad from 1922.  But did you know that the ad was inspired by Abraham Lincoln?  Read on to find out why. 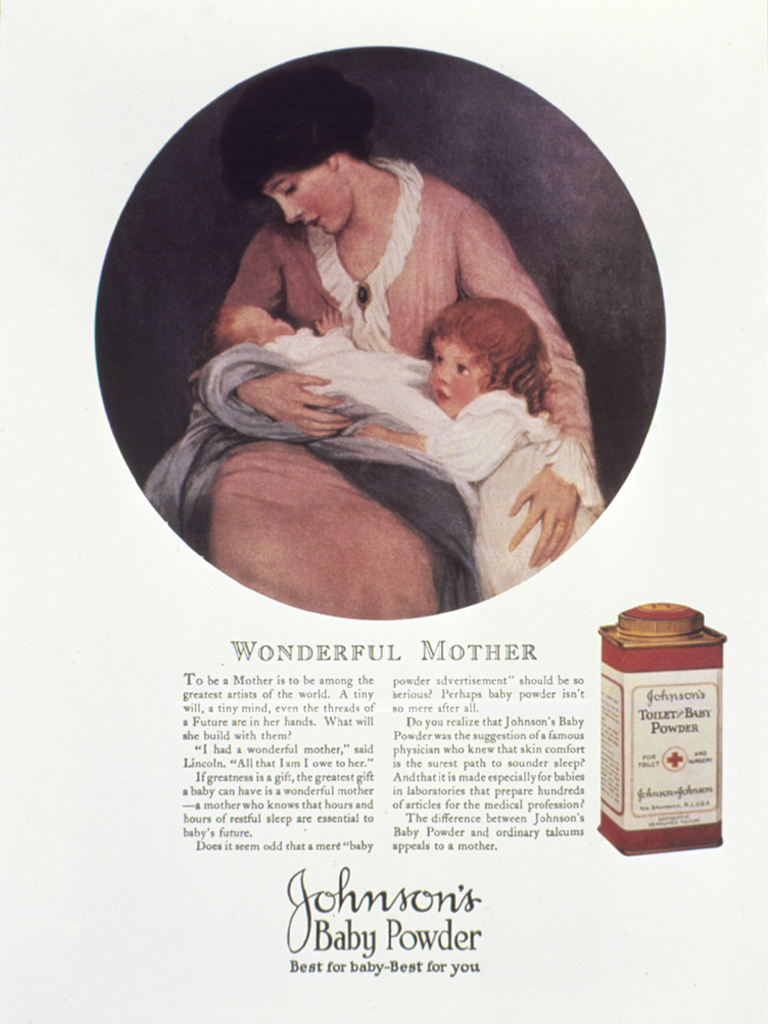 The Wonderful Mother ad appeared in the leading magazines of its day, such as Women’s Home Companion.  The centerpiece of the ad is a beautiful illustration of a mother looking down at her sleeping baby.  Her arm is protectively around her other child.  The ad conveys nurturing, trust and comfort, and perfectly captures the parent-child bond and the love between the mother and her children.

So what did all of that have to do with Abraham Lincoln?

Believe it or not, the title of the ad and the inspiration behind the text comes from a quote from Lincoln, which is reproduced in the body of the ad:   “‘I had a wonderful mother, said Lincoln. ‘All that I am, I owe to her.’”

Here’s a close up of the text: 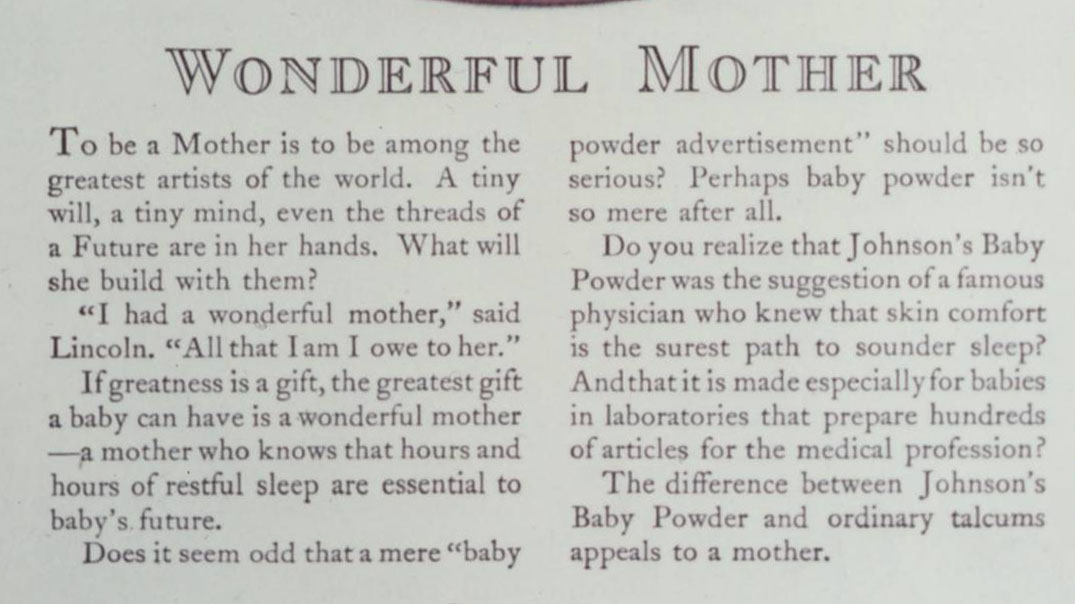 The ad begins by talking about how parents can help shape their children’s futures, mentions the ways in which the product could help mothers soothe their babies so they can get the sleep they need, and finishes by bringing in another theme that ran through the Company’s advertising from the very beginning:  the scientific basis, reliability and trustworthiness of the Company’s products.

This was a reference to a national public awareness campaign the Company initiated that talked about the important role of the retail pharmacist as a trusted, ethical expert who could help people with their own and their family’s health.  It was done to give a boost to community retail pharmacists, in the face of the growing impact of the popularity of the automobile – which let people travel farther to shop.  (The campaign was thought up by Scientific Director Fred Kilmer, himself a former retail pharmacist.)

The Wonderful Mother ad was such an all-time favorite that, approximately 70 years later, our consumer operating company brought it back.

The mother and little girl in the new Wonderful Mother ad have updated clothing and hairstyles, but the basic image is the same.  They’re in the same pose, and they’re dressed in just about the same colors as their 1922 counterparts.  The orange and white baby powder tin from 1922 is now the more modern white container of the late 1980s/early1990s.  Looking at the two ads together really gives you a sense of the history of JOHNSON’S® Baby Powder (since 1893!) and the multiple generations of parents and children it has touched.

Very interesting bit of history. Some may remember that during the 1980's we had a beautiful print ad for BABY that featured a Black family. I think it was among the first times that we included African Americans in print ads. I'd love to learn more about how we began those early steps toward diversity in marketing. Conrad

That's a great subject for a future post! I will definitely do some research on it. Thanks for your comment.

Yes, The classic Mother and Child icon is so powerful and potent even in India. I guess universally so. Surely it is featured globally countrywise. A strong Johnson & Johnson Worldwide link. A Trusted Name.

Proud to be a Johnsonian

I do not think any company will have a legacy that goes beyond a century in every thing they have achieved. We are proud of our association with this institution beyond continent.

We must make a book, which contain all these advertisements, and which appeared 50 years back.

I'm getting ready to do some posts on our history in the Asia-Pacific region, so please keep reading! We sold our products through sales agents in Asia-Pacific countries for many decades before opening operating companies there -- in many cases going back to the early part of the 20th century. When the business reached a critical mass in a particular country, an operating unit was opened. In terms of Asia-Pacific, we opened operating companies in Australia in 1931; India in 1957; Malaysia in 1960; Pakistan in 1965; Thailand in 1970; Singapore and Indonesia in 1974; Japan in 1978; Korea in 1983; and China in 1985. Hope that helps!

I am trying to locate a photograph a picture of J&J Baby Powder bottle that may have been in retail stores from about 1960 through 1972. Does anyone have a photograph they could share. Thank you.

Great article (as usual). Any chance of getting high-quality images or reprints of the ads as a gift for our wife, sister, mother, etc?

We are working on making reprints of the Wonderful Mother ad available...so stay tuned for more information on that!