What Johnson & Johnson ad was so popular that people were inspired to make their own versions of it?  Hint:  the ad ran for an incredible 30 years and, when the Company tried to update it, consumers protested.  Here’s another hint:  the ad contained one of our most memorable advertising slogans, and it advertised a product that most people today have never heard of. 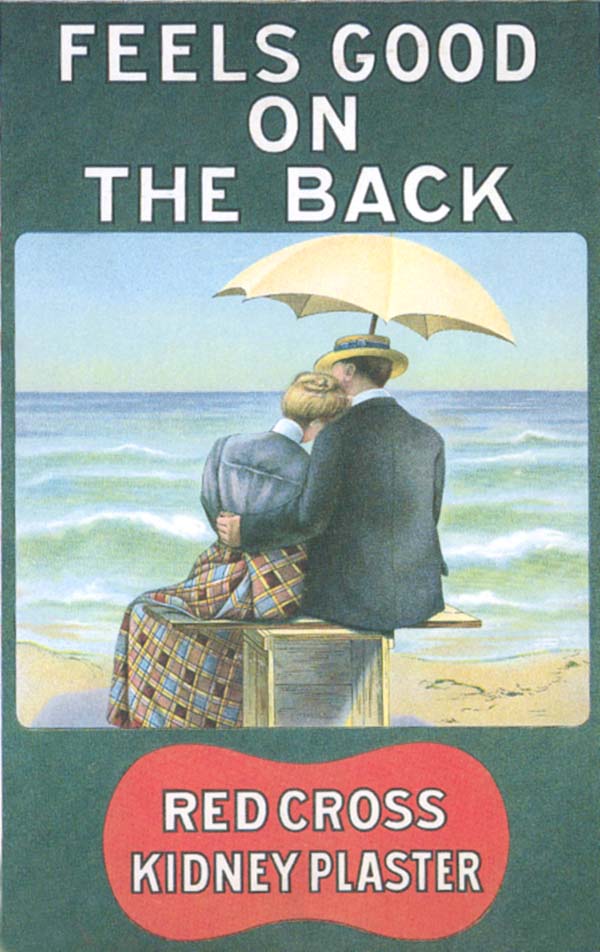 The Ad that Launched a Thousand Tributes 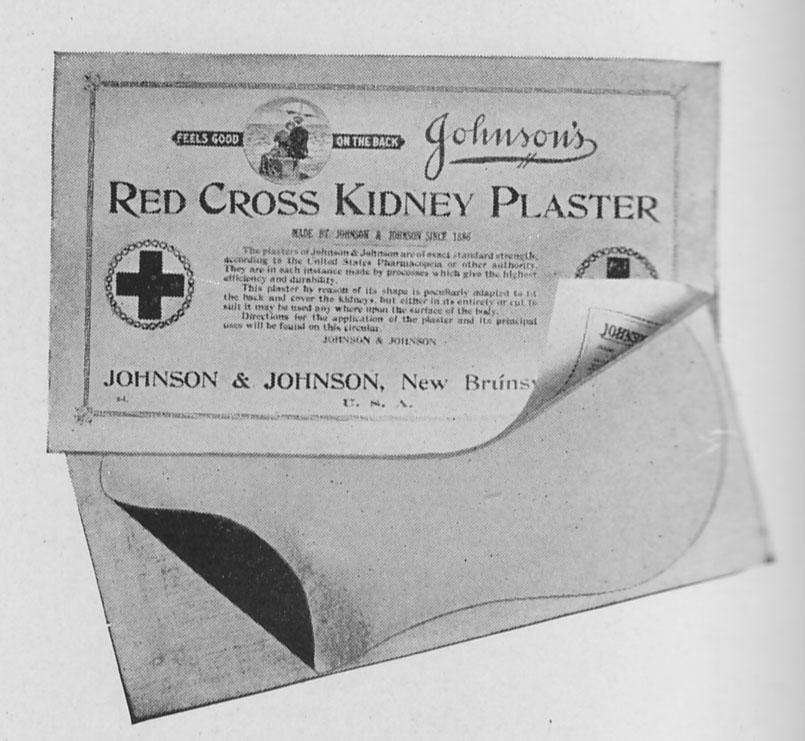 An actual kidney plaster, with its distinctive kidney shape

The Feels Good on the Back ad made its debut around 1889-1890 and immediately became a hit with the public.  The image of the couple sitting on a beach watching the waves come in, with the man’s arm around the woman’s waist, really resonated with people.  And when you look closely at the ad, that’s no surprise:  the image, with its tagline “Feels Good on the Back” appealed to people because it wasn’t about kidney plasters.  It was really about human connections and human touch.  The phrase certainly applied to the therapeutic effects of a kidney plaster, but when accompanied by the illustration, it also highlighted the soothing and comforting effects of touch – something that the Company also brought out in its baby products advertising, and which continues to be a focus in many of our ads today. 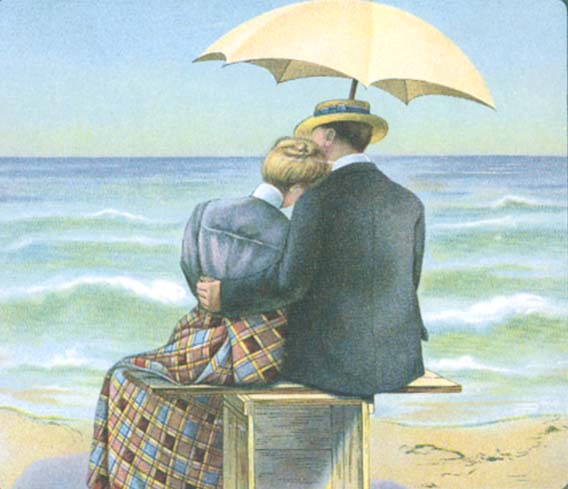 The couple was facing away from the viewer, which only added to the appeal.  Since viewers couldn’t see their faces, people could substitute themselves for the couple in the ad peacefully watching the ocean – sort of a late 19th century zen moment.  (Actually, blog readers might want to take a moment and try doing that right now:  it actually works, and you’ll get a few seconds of calm, peacefulness and comfort.  You can practically hear the waves and feel the sun.) 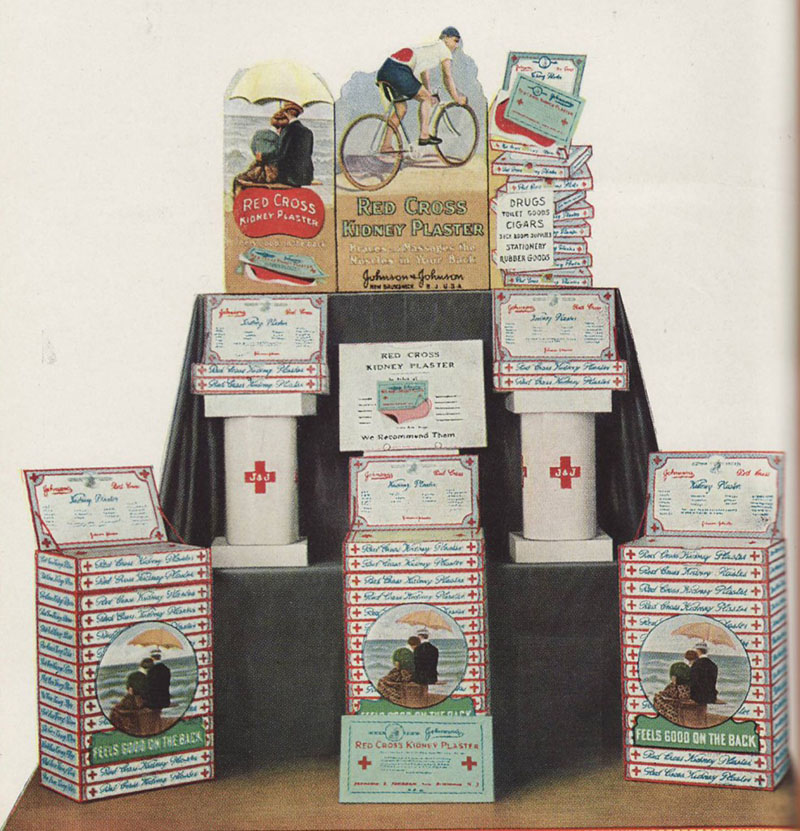 Johnson & Johnson was inundated with requests for the ad, and poster-sized copies were soon displayed in thousands of drugstore windows.  During World War I, the image and theme were used a number of times to illustrate support for the men and women serving in the armed forces. 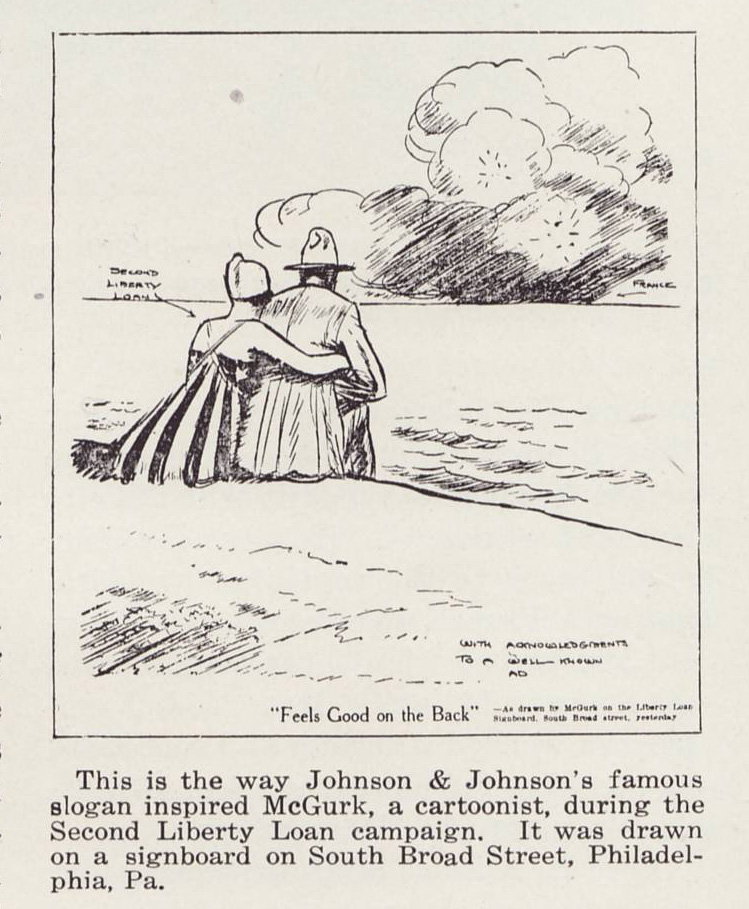 A 1918 U.S. Liberty Loan Campaign featured this cartoon homage to the Feels Good on the Back ad.  Lady Liberty has her arm around a soldier.

People took the Feels Good on the Back ad so much to heart that many of them felt compelled to produce their own versions, which they sent to Johnson & Johnson.  Fred Kilmer, who edited the Company publications, reprinted these efforts in THE RED CROSS MESSENGER, the publication for retail pharmacists.  (Since I’m blogging, I feel compelled to point out that the consumer artwork in our publication around 100 years ago was an early example of user-generated content!)  Here are some of the public’s efforts that were reprinted in the MESSENGERS. 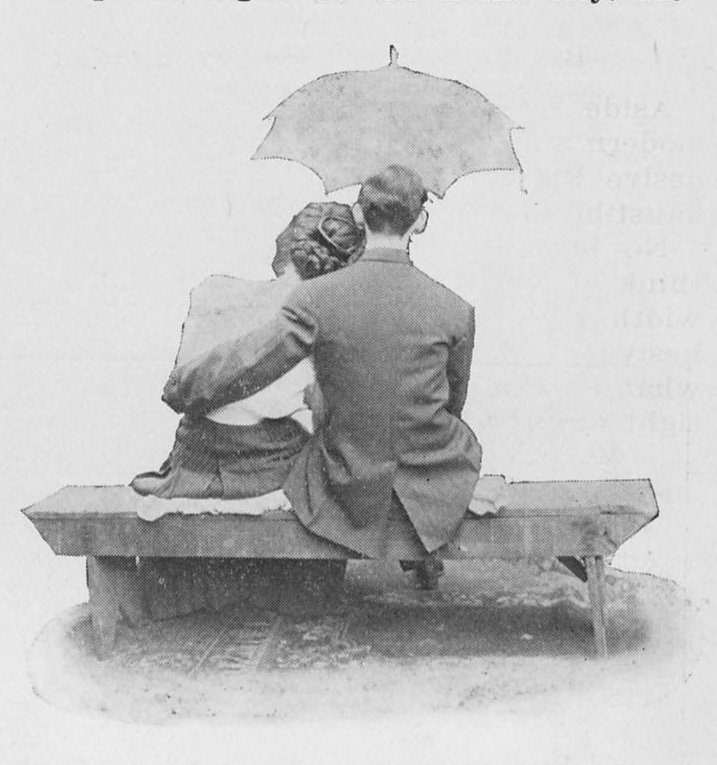 A couple in Philadelphia, PA  re-enacts the ad for “Anybody’s Magazine in 1911. 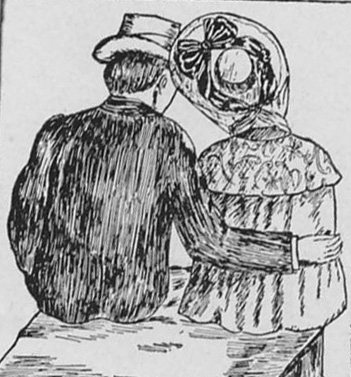 Drawing inspired by the Feels Good on the Back ad 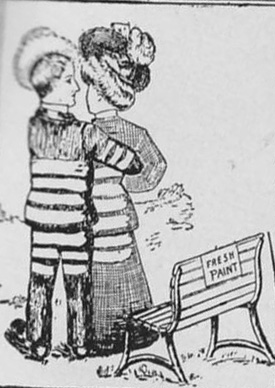 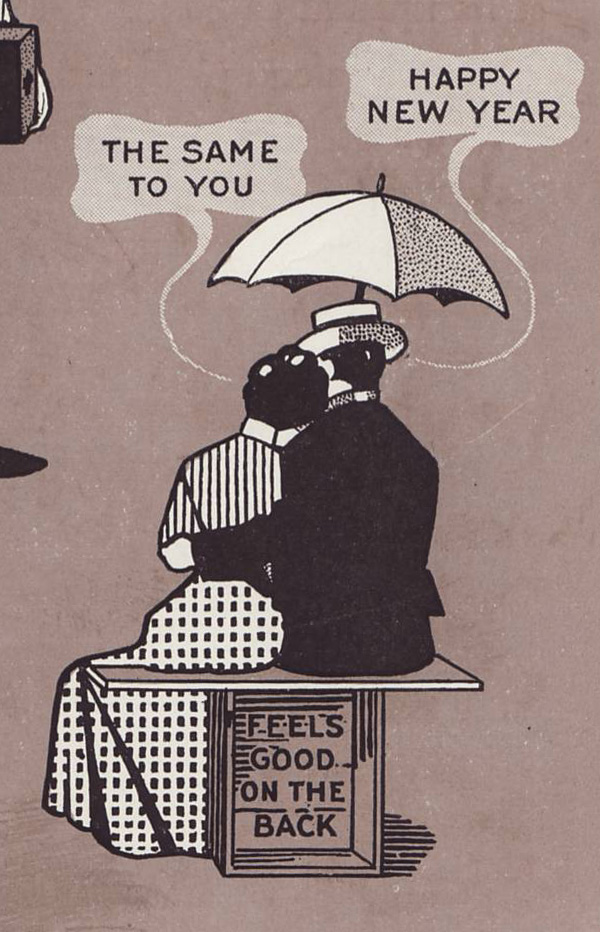 Even the Company got into the act.  This one appeared on the cover of the January, 1917  edition of THE RED CROSS MESSENGER.

The Feels Good on the Back ad ran unchanged for an astounding 30 years.  At one point, the Company tried to update the woman’s outfit, causing a flood of protests from consumers who wanted the ad kept exactly as it was.  Here’s what Fred Kilmer said:

“…she had become a favorite in many lands.  The whole world had grown to know her as a friend and to manifest an interest in her love affair.  And her friends simply wouldn’t permit her to wear anything but those simple old-fashioned clothes.  They protested vehemently.  So for thirty years she has snapped her fingers at Dame Fashion.”   [THE RED CROSS MESSENGER, Vol. XII, No. 4, 1919,  p. 93]

The Company very wisely decided not to go through with the update.   And even though the product advertised by the couple in the ad is from a much earlier time in our history, their image still connects with people today because of the universal feelings it appeals to.

In my next post, I’ll talk about an ad from 1922 that was so popular that the Company brought it back over half a century later.

I tried visualizing myself in the ad looking at the ocean in the warm sun. You're right - it worked. A little bit of serenity in an otherwise hectic work day. thanks, Marcia

Johnson & Johnson has an unique distinction of personal touch in whatever they do. It is really touching to see the add with that was so popular.
Thanks

Now, I'm curious - are there any copies of the updated ad that drew so many protests?

That is such a 'feel good' ad. Wouldn't it be great to see these kinds of ads plastered on bill boards today instead of some of the tasteless stuff we are inundated with? Bravo to J&J for maintaining their high standards.

So far I haven't seen any, but I will take another look through our archives. The changes would have been attempted during the Nineteen-teens. I've found information that talks about the situation, but so far no copies of the updated outfit. If I find any, I will post them on the blog.

I would be interested to know what was on the plaster to give it the "therapeutic affects" that the ad offers.

This Ad is something created even before the famous J&J CREDO was drafted. I believe the company retained its core value since the very beginning till to date when the entire Business Empire is amazingly dictated/directed by its CREDO!! The Philosophy of one of the world's largest healthcare company, truly a "family company" built on ethics, gentle care, quality & Compliance. Isn't it Incredible!! and something out of the world in today’s world.....Keep it up J&J we are always with you.

Since it was designed to relieve lower back pain, the plaster contained compounds derived from plants ("gums and balsams") that provided pain relief. The plaster itself would have provided support for sore back muscles.

I did a Google search, and found this website where it explains what a kidney plaster is. I heard this in the musical, "The Music Man". Robert Preston mentioned the kidney plaster in one of the sequences in the film. Then I was intrigued by it all.