2009 is a big year for anniversaries at Johnson & Johnson.  For instance, it was 70 years ago (in 1939) that Dr. Philip Levine, working in our laboratories, discovered the human Rh factor.  It’s been 60 years (1949) since we opened affiliate companies in Portugal, France and Colombia.  It was 50 years ago (1959) that we formed our operating company Ethicon, Inc. out of our historic suture business.  It was 50 years ago that we acquired McNeil Laboratories.  And it was 90 years ago this year – in 1919 – that Johnson & Johnson opened its first affiliate company, and its first plant outside of the U.S. – in Canada.

Let’s go back to 1919.  Dial telephones were introduced in the United States, the 18th Amendment to the Constitution (Prohibition) was adopted, and in Europe, the Treaty of Versailles, officially ending World War I, was signed.  The U.S. Congress passed legislation giving women the right to vote (however, it didn’t take effect until 1920, the following year). The Chicago Black Sox scandal of the 1919 World Series was making headlines, as was the Boston Molasses Disaster.  During the war, Johnson & Johnson had dramatically increased its production capacity to meet wartime demand for its products, and in 1919 demand was still high, though the Company was starting to shift back to its regular production schedules.

Although 1919 was the year we incorporated an operating company in Canada, it wasn’t the start of our presence there:  the Company had already been represented in Canada for 30 years by sales agents in Montreal called Gilmour Brothers and Company, going all the way back to 1889 – just three years after the beginning of Johnson & Johnson.

The Company shipped product from New Brunswick, New Jersey to Gilmour Brothers and Company, who then distributed the product throughout Canada.  By the Nineteen-teens, the relationship was so long and close that a 1918 issue of THE RED CROSS MESSENGER, listed the Gilmour brothers’ company as the Johnson & Johnson “Canadian Office” on the “J&J Honor Roll” of Company employees who were in the armed forces during World War I.  J. L. Gilmour, who’s pictured below, was one of four members of the Gilmour family from our “Canadian Office” on the Johnson & Johnson Honor Roll for the war.    He served as a captain in the Canadian military.  [THE RED CROSS MESSENGER, Vol. X, No. 3, 1918, p. 304]

So how did we get from sales agents to an operating company?  I’ll let General Robert Wood Johnson, who witnessed the transition, describe it:

“Trade grew steadily in volume, and by 1909 Gilmour Brothers began to manufacture certain Johnson & Johnson products at their plant in eastern Montreal.  Ten years later a further step was taken.  It was decided to establish a Canadian plant, to be operated by our old friends and associates, the Gilmours, and organized as a separate company within the family of Johnson & Johnson.  In fact, the new organization purchased the Gilmour plant for use as its factory.  John Manley and I went to Montreal to help remodel the building and install additional machines.  This company was incorporated in 1919; it bleached its first surgical gauze in 1927.  From the first there was teamwork on both sides, with the Canadian staff making final decisions while our people from New Brunswick gave all the help they could.” [Robert Johnson Talks it Over, by Robert Wood Johnson, Johnson & Johnson, 1949, p. 121]

The fact that the Canadian management made final decisions foreshadowed the philosophy of decentralization that Robert Wood Johnson – and Johnson & Johnson – would adopt as the Company continued expanding globally.  Our first affiliate company in Canada 90 years ago this year proved to the Company’s management that decentralized affiliate companies outside of the United States would work, and it set the stage for the Company’s later global expansion. 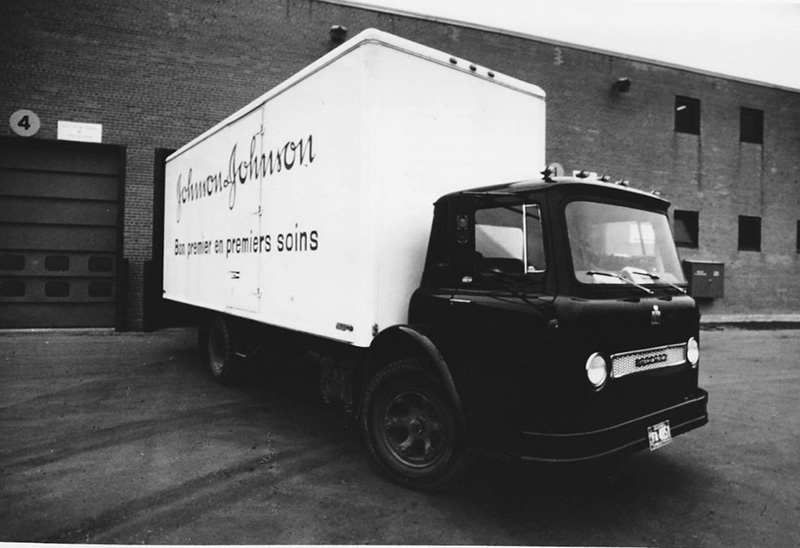 I am in search of a Gilmour family who once had a cottage in Mont-Saint-Hilaire. This was John L. Gilmour and his wife Mimie Lonsdale. It seems they did not have any children but left nieces and nephews by the name of George P. Gilmour, Burnhard (Bernard) Gilmour, Helen Gilmour wife of Kenneth Taylor, and many more. Would this John L. Gilmour be the same person mentionned in the history of Kilmer House and responsible of the distribution of Johnson and Johnson products in Montreal? The Lovell dictionnary in 1930, associates him with the Gilmour Bros & Co Ltd, importers, 2115 blvd PieIX, Montreal.

In reply to by Pierre Gadbois

From the information in your comment, it sounds like it's the same person. However, we don't have any personal information on the Gilmour family; we just have some archival records related to their being sales agents and distributors in Canada, and then managers of our first operating company outside of the U.S. for Johnson & Johnson in the early part of our history. There are many online resources such as Rootsweb that may be able to help you research the Gilmour family.

Good luck in your search!

In the 1940s my mother was living in Montreal. Her best friend was named Joan Gilmour, the only child of a Gilmour whom I was told was connected (perhaps as a vice-president) with the Canadian Branch of the Johnson and Johnson Baby Products.

Well part of the comments you made above are correct, but let me clarify. J.L Gilmour did have a wife, however her name was Monica. They did have one son named John Ross Gilmour who was adopted from Toronto. John Ross Gilmour was my father (he passed away in 1979). So Monica and J.L were my grandparents. He passed away in the late 50's but a painting of Monica hangs in my dinning room and both her, JL and my father are burried at Mount royal under the same stone.

In reply to by Nadine

Johnson & Johnson opened its first affiliate company in Canada in 1919 and the first in the U.K. in 1924. Other than what's already on the Kilmer House blog, we don't have information on how they were opened. Much of that type of information is what we would consider proprietary, and we wouldn't be able to share it outside of the Company if we did have it.

Best of luck on your paper!

Thank you for your feedback.

The John L. Gilmour that Pierre spoke of was the uncle of the one that John Gilmour spoke of whose name was also John L. Gilmour (the one from J&J). His wife was indeed Minnie and he had no children, although he lived with sister-in-law who was the mother of the John L Gilmour that John spoke of. His brother Thomas Gilmour died when his family was young and they lived with John (Jack) and Minnie. I realize that this is confusing and I hope that I have helped but, if not, I will try again.

In reply to by Anne Carling

Thanks for this information. I was going through the paper I wrote in 2010 concerning the house John and Minnie Gilmour owned in Mont-Saint-Hilaire and saw your reply in 2013. Would any of you have a picture of both John and Minie Gilmour (other than the one showned here about Johnson & Johnson) or a picture of the house in Mont-Saint-Hilaire they held from 1928 to 1944? Thanks.

Note for John Gilmour who posted here on 26/11/2011.
We are both descendants of Ross sisters in Montreal; you, of Monica (married to John Lonsdale Gilmour) and me, of Ruth (married to WA Morris).
I have put together a pedigree of our Ross family going back to 1700 in Ireland (proved) and most likely accurate to the early 1600s.
If you are interested, and if the site is willing to pass on this message, you can reach me at kilmo57@yahoo.com

I am the granddaughter of John Lonsdale Gilmour, married to Monica Ross. My father was John Ross Gilmour. My brother is John Ross Trenholme Gilmour and my sister is Julia Monica Gilmour. My daughter is Lindsay Hendry who is very interested in my family history but I have very little knowledge of my family history to share with her. If anyone has any information, it would be greatly appreciated!!!!! From what I know, my grandfather was president of Johnson& Johnson...... that's the extent of what I am aware of.

Hi Susan. I may be able to help. Your father was my Godfather and my mother's cousin. You can contact me at carling.oconnor@gmail.com
By The way if Pierre Gadbois still wants information he can contact me too.