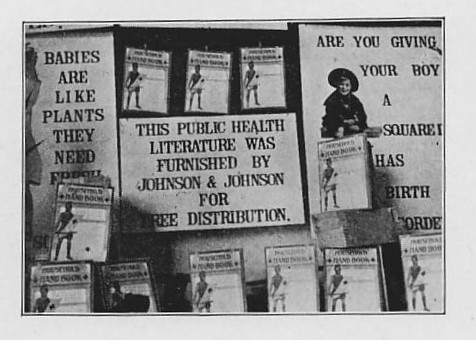 The DrugWonks blog had a great post on the need for pharmaceutical companies to become teachers, experts and partners in advancing public health.  It’s a great idea that harks back to a time 100 years ago when some of the major public health improvements we take for granted today were at the forefront of society.  And it’s been something Johnson & Johnson has felt strongly about throughout its history.

Johnson & Johnson was founded in 1886 to manufacture the first mass produced sterile surgical dressings for use in U.S. hospitals.  These dressings helped to greatly reduce the astronomical mortality rates from surgical infections.  At the time, surgeons operated in their street clothes and used unsterilized cotton from the floors of cotton mills as dressings…and closed incisions with ordinary sewing needles and thread that they stuck in the lapels of their frock coats between operations.  Needless to say, infection rates were sky high and most patients didn’t survive surgery. 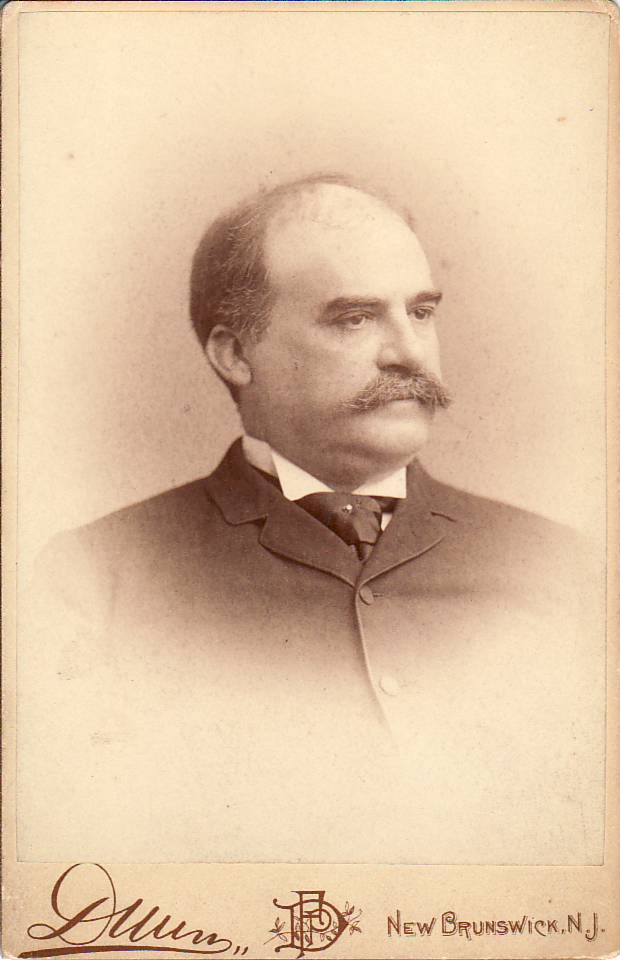 Robert Wood Johnson the first heard Sir Joseph Lister – the founder of antiseptic surgery -- speak in Philadelphia in 1876, and was inspired to produce the first mass-produced sterile surgical dressings.  At the time, surgeons wanting to try Lister’s methods had to sterilize gauze and cotton on their own, which was time-consuming, messy and costly.    When Johnson wasn’t able to realize his dream in his previous partnership, Seabury & Johnson, he and his brothers left and started their own company.  Johnson (who had two older brothers who fought for the Union Army in the Civil War and may have heard stories about the horrendous surgical conditions in battlefield hospitals) saw not just a business opportunity but a way to spread Lister’s discoveries, change surgery and save patients’ lives. 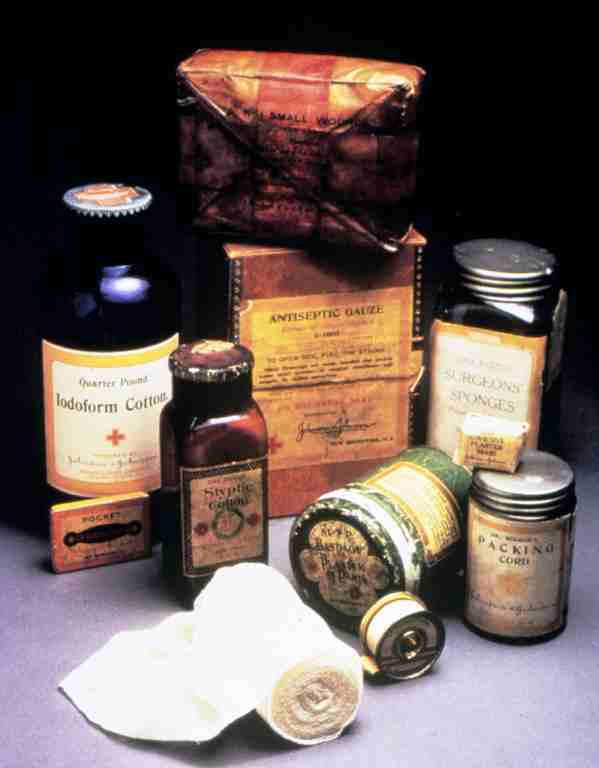 Johnson & Johnson also manufactured sterile sutures and ligatures with pre-threaded needles.  In order to spread the word about antiseptic surgery, in 1888 the Company published Modern Methods of Antiseptic Wound Treatment, a collection of monographs by the leading surgeons of the day and edited by Fred Kilmer…who readers of this blog will know because he was our scientific director from 1889 to 1934. 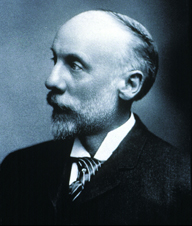 In 1888 Kilmer was a New Brunswick, N.J. pharmacist and pharmaceutical chemist and a huge advocate of public health improvement.  His work on Modern Methods convinced Robert Wood Johnson the first that Kilmer should become part of Johnson & Johnson, and he persuaded Kilmer to join the Company the following year. 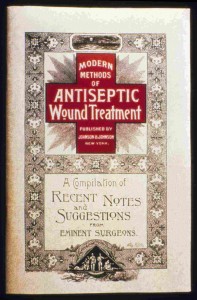 Modern Methods quickly became an important “how to” manual for surgeons wanting to try Lister’s methods, and was considered a major contribution to the advancement of antiseptic surgery, with over four million copies of the publication distributed worldwide.  With Fred Kilmer, Johnson & Johnson got a lifelong promoter of public health improvement and education.  For many years, Kilmer was the president of the New Brunswick (N.J.) Board of Health and an advisor to the New Jersey Board of Health.  He was instrumental in the improvement of New Brunswick’s public sanitation and in 1918, Kilmer served as president of the Middlesex County Anti-Tuberculosis League.  Besides being a scientist, Kilmer was a good writer and didn’t hesitate to use his talents to educate both Johnson & Johnson employees and the public on a variety of subjects, including hygiene, first aid, disease prevention and more. 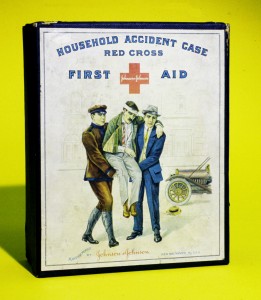 Spurred on by a conversation Robert Wood Johnson had with a railway surgeon about the difficulty of treating injured workers laying track for the new cross-country railroads, Johnson & Johnson pioneered the first-ever First Aid Kits to treat injuries on-site.  The company also researched and published the first First Aid manuals, so that people could provide initial treatment for injuries and not do more harm to the patient.

1890s and beyond: Maternal and Child Health

Johnson & Johnson also made maternal and child health kits since the 1890s.  In the days when most babies were born at home, these kits contained supplies that doctors and midwives would need to make sure that births were safer for the mother and the baby.   The Company relied on the advice of physicians for what to include in the kits, and they were often named for the doctors who had contributed the ideas.  The kits contained items such as clean obstetric sheets, cotton and gauze, ligatures for the umbilical cord, nitrate of silver solution to prevent infections that often led to infant blindness, antiseptic soap and more.

One early kit contained something that would become a product line in its own right:  sanitary napkins for the mother. 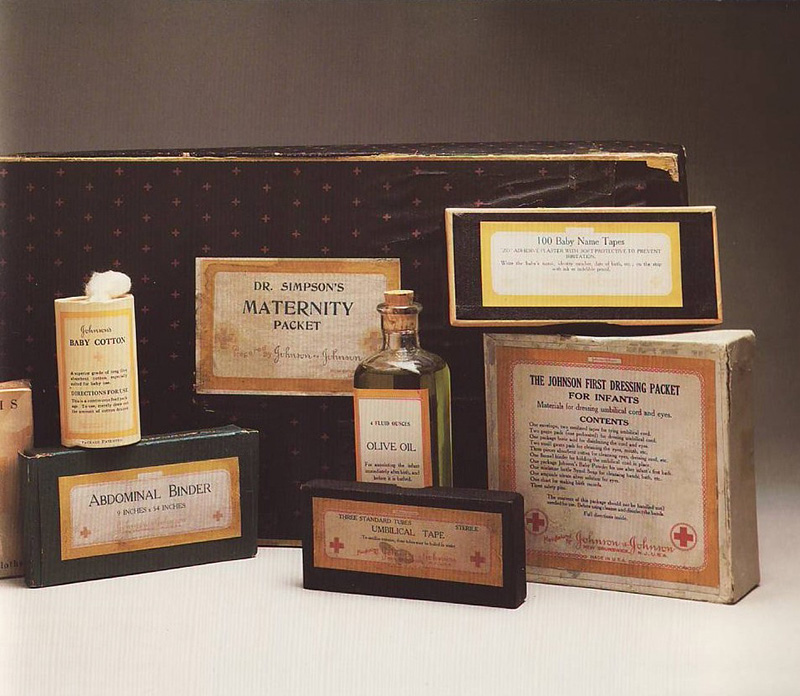 The kits also contained detailed instructions about proper hygiene during delivery and afterward, and care of the mother and baby, specifically regarding preventing the infections that made childbirth dangerous for mothers and babies before the advent of modern medicine.   The pamphlets focused on the theme “Every Baby Has the Right To be Born Well.”

In the days before antibiotics, vaccines and modern medicine, the average citizen’s best tool for keeping his or her family safe from infectious disease was knowledge.  The Company made antibacterial soaps such as Synol, as well as fumigators and other products for disease prevention, but went beyond just advertising them.  They saw that the best way to combat diseases like diphtheria and typhoid in the early 1900s was to arm people with knowledge about how to kill the germs that caused them. 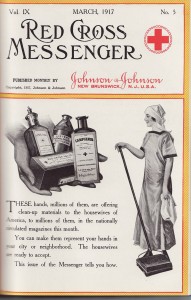 Johnson & Johnson advertised “Clean Up Weeks” – usually in the early spring, that educated the public about clearing brush, stagnant water and other disease hazards outside the home, and how to do spring cleaning inside the home with antibacterial soaps and other products.   The Company published a Household Handbook that was free to the public and contained information on how to prevent the spread of infectious disease, how to keep your family healthy, and first aid and safety instruction. THE RED CROSS NOTES, a Company publication for doctors and surgeons, frequently had articles about combating diseases like scarlet fever, diphtheria, meningitis and measles. 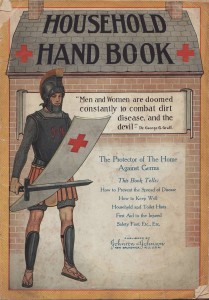 Even some of the more unusual historical products the Company made were designed to fight disease and improve public health.  Mosquitoons may have perhaps the weirdest product name in Johnson & Johnson history, but it was a fumigator designed to kill disease-carrying mosquitoes. 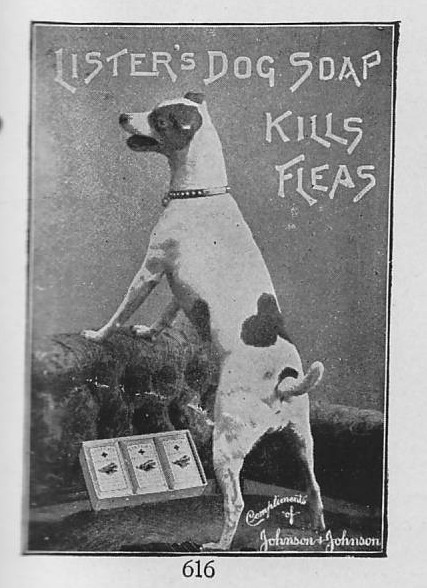 Lister’s Dog Soap seems kind of funny too, but it was an antibacterial dog soap that was used to help rid dogs of fleas and other insects that could carry disease into a household.   And in 1918 the Company made gauze masks to protect the public during the deadly influenza epidemic. The Company continues this tradition today in many ways, including being a founding sponsor of a program that reduces childhood injury around the world.

So why do we do it?  It goes back to the founding philosophy of Johnson & Johnson, which was to save and improve lives with the first mass produced sterile surgical dressings and other products, and continues today as part of the Company’s responsibilities to patients, doctors, nurses, consumers and the community.

I have been reading all the Kilmer House Blog articles that have been advertised in the Highlight News/Global ENN, and I am always anxious to read the next one. I have worked for Johnson & Johnson for 35 years, and I find these articles extremely interesting and educational. I'm very proud to work for J & J, and I want to continue learning about our company, especially in the early years, and how many "firsts" the company contributed to society as a whole. Thank you, and keep up the wonderful work, Marcia :)

Thank you for this informative post. I stumbled upon this blog as I was researching the company's Health and Wellness programs for my Organizational Development class. One question that occured to me was: What is J&J doing today in advancing public health and wellness (as mentioned as part of the Credo) in light of the national obesity...um...epidemic, as it now seems to be called? Given J&J's long-standing position of prevention through education, I was curious to see how that philosophy has evolved into the 21st Century. Thanks.

As you can see from the update at the end of this post, Johnson & Johnson is still involved in advancing public health and wellness in the 21st century. For employees, the Company has a number of programs and services that address obesity, including programs encouraging physical activity, fitness centers, pedometer distribution, walking challenges, and weight management and nutritional counseling. In October of 2008 we established a new wellness business to deliver products and services that will help consumers adopt lifestyles and behaviors that reduce the risk of preventable chronic diseases and help them sustain good health. That includes programs to get people engaged in physical activity, programs to control binge eating, and weight management plans. Another one of our operating companies provides information on weight loss surgery as a possible solution for morbid obesity. Here’s a link to our 2008 Annual Report that features one of our employee's success stories on page 29: http://files.shareholder.com/downloads/JNJ/509991472x0x279165/27509B47-3E17-454B-8E4E-54F07D09A668/2008_JJ_Annual_Report.pdf

And here are some more links to programs for getting people engaged in physical activity: http://www.healthmedia.com/products/webinterventions/move.htm