The Product that Dared Not Speak Its Name

Since it earliest days, Johnson & Johnson has made products in response to a variety of needs in society.  Some of these products – sterile surgical dressings and sutures, the first First Aid Kits, an antibacterial soap to combat infection, were discussed widely.  But there was one equally obvious need that no one wanted to talk about, even though products to address it made life easier for roughly half the population.  And that was the need for the first mass produced women’s sanitary products. 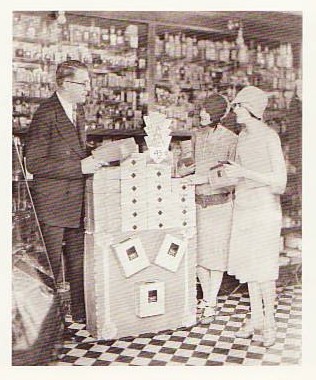 Before the era of commercially available women’s sanitary protection, women resorted to homemade methods, which were time consuming and less than adequate.  In the 1890s, Johnson & Johnson had started making maternity kits, which contained products that were used by physicians and midwives assisting during childbirth...at a time when most babies were born at home and not in hospitals.  One of these kits was suggested by Dr. Joseph Brown Cook, who was a surgeon at the New York Maternity Hospital.  The kit contained sanitary napkins for the mother.  At the same time, Johnson & Johnson started listing sanitary napkins in its 1897 price list.  In keeping with what was to become the item's "modesty-based" approach in advertising, it is the only product category on the page without a large-type heading. 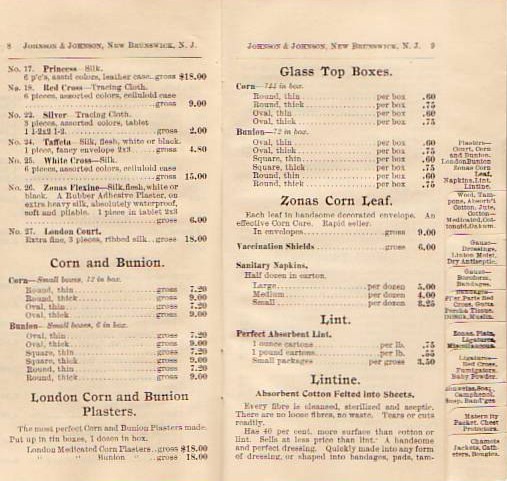 These sanitary napkins were said to be the first commercially available disposable sanitary protection products for women in the United States.  The earliest ones the Company sold were called “Sanitary Napkins for Ladies” and “Lister’s Towels.” 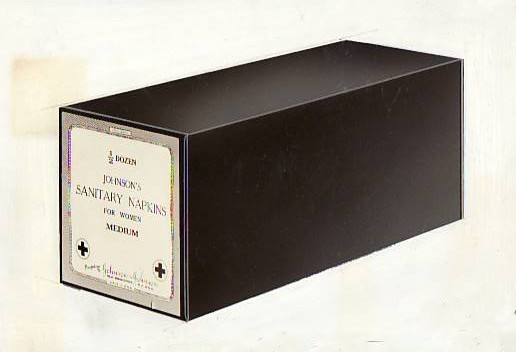 The advertisements said “Lister’s Towels, Sanitary for Ladies.”  But the problem was that women didn’t want to be seen buying sanitary towels for ladies.  So in the 1920s, the Company came out with Nupak, a brand name that could be safely asked for without being descriptive of what the product did.  The box had a label on one side with just the brand name and the company name.  The other sides of the box were plain so that it could be carried or stored without embarrassment. 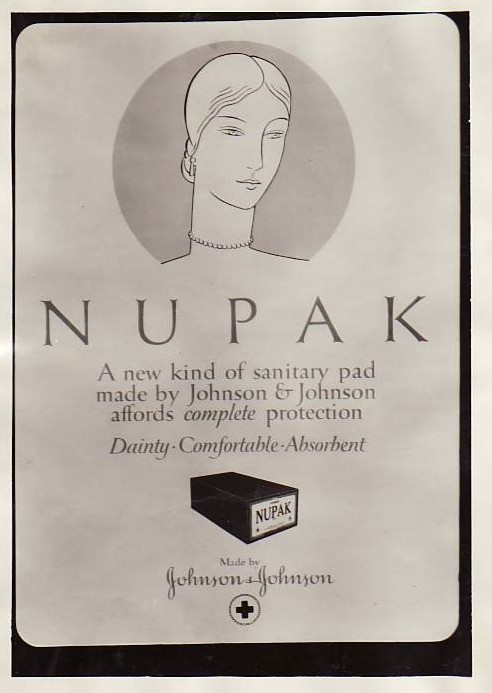 This strategy continued when the Company came out with the MODESS® brand.  Not only was the product improved, so was the method of purchasing it. 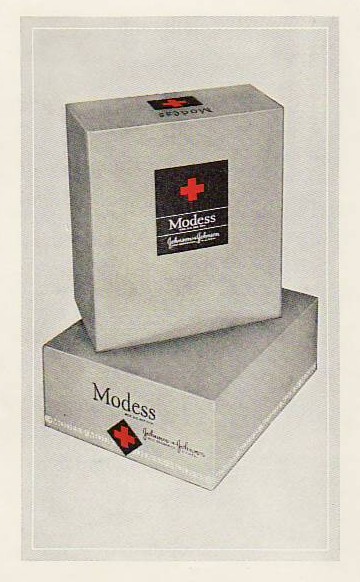 In 1928, Johnson & Johnson started including silent purchase coupons in magazine ads for MODESS®.  These could be cut out of the advertisements and silently presented to a salesperson, without the customer ever having to utter the name of the product.  The product – still in a plain box so as not to cause undue embarrassment, could then be wrapped up in brown paper and taken home.  A Ladies Home Journal ad stated, “In order that Modess may be obtained in a crowded store without embarrassment or discussion, Johnson & Johnson devised the Silent Purchase Coupon presented below.  Simply cut it out and hand it to the sales person.  You will receive one box of Modess.  Could anything be easier?”  (Ladies Home Journal ad for MODESS®, June, 1928.) 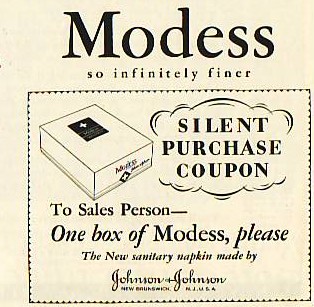 At the same time, the Company was trying to make MODESS® appealing to a younger generation and to stress its cutting-edge modernity.  This was done by a series of advertisements in the 1920s that played upon the differences between the younger, jazz-age generation and their parents.  The message in the ads was clear:  these are not your mother’s sanitary protection products.  (Even though your mother was probably using a silent purchase coupon to buy them.) 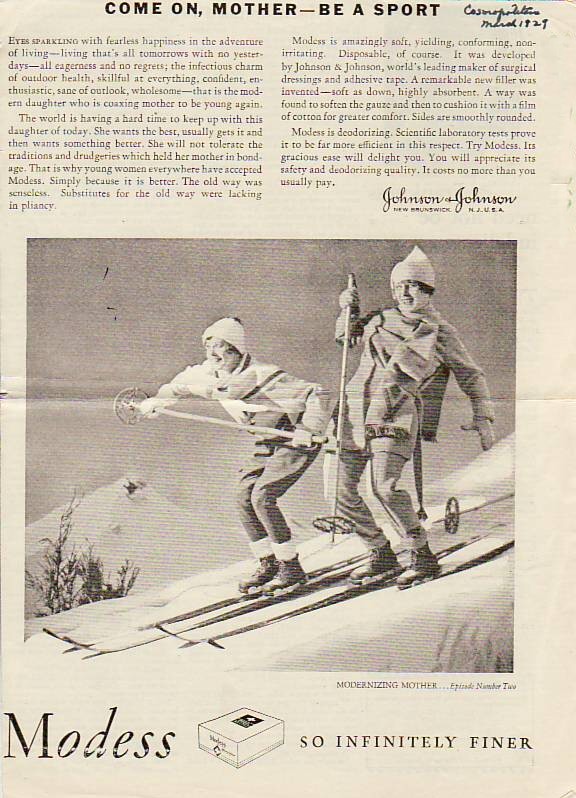 The ad campaign was called “Modernizing Mother” and was focused around daughters trying to teach their mothers to be less old-fashioned and keep up with the times.  Ads had titles such as “Never Mind, Mother – You’ll Learn,” (about playing golf in a short flapper dress); “Step On it, Mother, This Isn’t the Polka,” (about learning new dances); and “Don’t Be a Fraid-Cat, Mother. There’s No Danger,” (about flying in a small propeller plane).

Despite the appeal to a less old-fashioned younger generation, the ads still talked in detail about the selling points of the product.  But the same problem still remained:  women, even women in the modern 1920s, still didn’t want to read about sanitary protection.

The Company’s eventual solution to that problem became one of the most famous advertising campaigns of the 20th century.

I learned a few things today, Margaret. Thank you for writing this interesting post.

Thank you Margaret, for this story. It is one of many examples of how Johnson & Johnson earned the reputation of the most trusted company. It is not an award that Johnson & Johnson asked for, but a recognition that is deserved.
FEELINGS - the concern for women in the early 1900's, and today concern about men, women and children, with products that help their lives; and marketing them in helpful and informative ways.
TOUCH - the importance for babies, and adults -- has been a mainstay for generations.
My only wish is that more folks would know about BTW and share their stories with one another, and understand the roots of this great corporation.
Having been employed by Johnson & Johnson for 37 years, I've been through more than one generation of products, and management, and continue to be proud to have had the affiliation for so long.
Suggestion - as a continued story, can you share some of the wonderful "Modess" print ads ?

Good to hear from you! I will certainly continue the MODESS story with more of the print ads in upcoming posts.  The link in bold type at the bottom of the post takes you to another post about the most famous of the MODESS ad campaigns: http://www.kilmerhouse.com/?p=58

Oh my goodness - I had no idea that JNJ was behind the Modess brand! They were so much better than Kotex!

I usually start off a post on Emergiblog with an old ad and I have used some of these very elegant Modess ads because I loved the dresses and the look of them!

I'm learning more and more about the company through these posts - and I always wondered what women did "before" the days of sanitary napkins!

I think we all owe a big thank-you to JNJ for THAT invention! : D

My name is Hannah and I am a student who attends Bingham Middle School in the state of Missouri. I am partaking in the 2013 National History Day the theme is Turning Points in History: People, Ideas, and Events. My topic is the history of feminine protection. I assure you I have done months of research but I was windering if someone from the Kilmer House could help me conduct an interview about the Johnson & Johnson company. I have info about it already but I would like to know a little more of them and how they were started. If anybody could be of any help I would greatly appreciate it. Thankyou.

In reply to by Hannah B

Hi Hannah,
As the Johnson & Johnson Company historian, I love the fact that you’re taking part in 2013 National History Day! I would be happy to help you with some history about how Johnson & Johnson started. Johnson & Johnson was founded to make the first mass produced sterile surgical dressings and sterile sutures to help make surgery sterile in the 1800s. We were founded in 1886 by three brothers – Robert Wood Johnson, James Wood Johnson and Edward Mead Johnson – from a family with 11 children in rural Pennsylvania. When the Civil War broke out in 1861, two of the older Johnson sons joined the Union Army. Robert (our founder) was only 16 at the time, and there was a very low rate of return among families with multiple sons in the army. So Robert’s parents apprenticed him in a retail pharmacy in Poughkeepsie, NY that belonged to his mother’s side of the family. That gave Robert a lifelong interest in health care, and he made that his career when he grew up. Robert started another successful business before J&J in the 1870s – it was called Seabury & Johnson. In 1874 Robert went to the Philadelphia Centennial Exposition, and heard a lecture by Sir Joseph Lister, the English surgeon who did the first sterile surgery. Robert was inspired by Lister – and by the stories about the terrible conditions of Civil War battlefield surgery he heard from his brothers – to make mass produced sterile surgical products to make it easier for surgeons to try sterile surgery. Here are the links to some posts on the blog with more of the story:

Hope this helps -- best of luck on your project!

A high school student in the late Sixties, I hated it if my mother sent me to the chemist to purchase Modess. They would be wrapped in brown paper. I didn't like asking, and more - hated carrying them in the street. I was sure everyone could "see" through the wrapper and knew exactly what I was carrying.
This was the era of 'the belt', and they were not fun. Stick on pads which came later were a huge improvement.
Mother completely banned tampons. I didn't use them until I left home.
Em.
Australia