In my last post, I talked about how the sudden death of Robert Wood Johnson the first caused shock and sadness among his family and his employees.  It was a measure of Johnson’s foresight and planning that he left Johnson & Johnson in very good hands, with strong management who could continue to guide and grow the company that he and his brothers built.  James Wood Johnson was elected President of the Company, and he soon had a new and unexpected employee:  his nephew, Robert Wood Johnson, Jr. 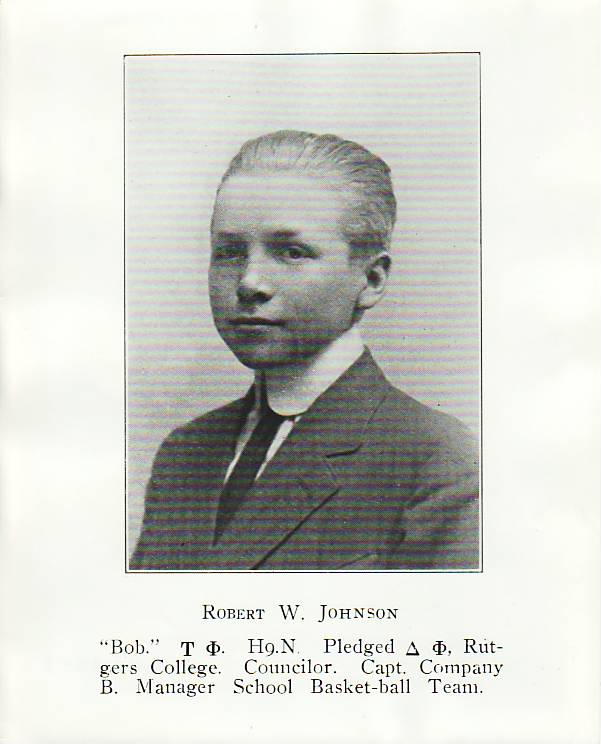 Young Robert had always been close to his father, and his death when Robert was 16 left him struggling to adjust.  After his graduation from Rutgers Prep at age 18, Robert decided to join Johnson & Johnson immediately, against the wishes of his family, who wanted him to go to college first.  During the summer after graduation, he again worked for the Company in a variety of jobs in the factory while his mother and uncle James tried to persuade him to finish his education before coming to work full time.

Their compromise was that Robert took post-graduate classes at Rutgers Prep while continuing to work part time at Johnson & Johnson.  He began to spend more time at work and less at school, while continually asking the plant foremen for a full-time job. 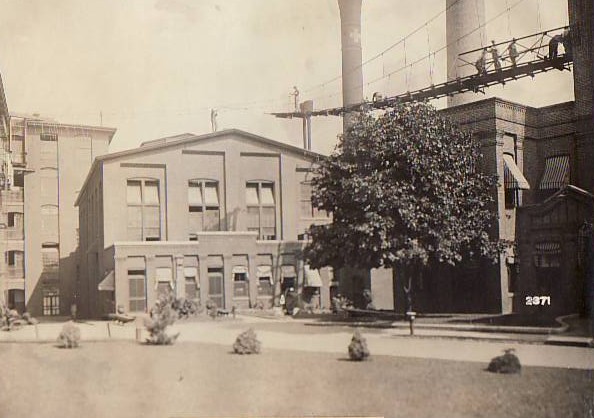 Power House, 1907.  The Building Still Stands, and is Our Last Remaining Old Building

Robert Wood Johnson was hired first to work in the Power House, in the lowest job there, and moved from department to department to learn how the business worked.  Robert was a hard worker, and the workers treated him as one of their own and formed a close bond with him.  He was an avid reader and continued his education from books and by learning his family’s business from the ground up. (Incidentally, the Power House Building, now the Kilmer Museum, is our last remaining building from the earliest days of the Company.) 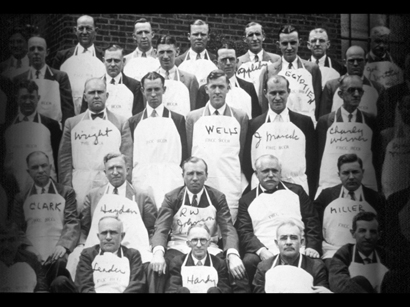 In 1914, Robert was elected to the Board of Directors to replace J. Ellwood Lee, who had died.  Robert was 21.  He didn’t have direct management control over the Company, since at that time it was handled by a Board of Control, but this recognized the fact that Robert would become a major stockholder when he turned 25, and would then have a say in how the Company was run.  In 1915, Robert was made a department head, to the great delight of the workers who were so fond of him.  He also began visiting Fred Kilmer in his laboratory more and more.  They developed a close relationship, and Kilmer provided Robert with fatherly advice. 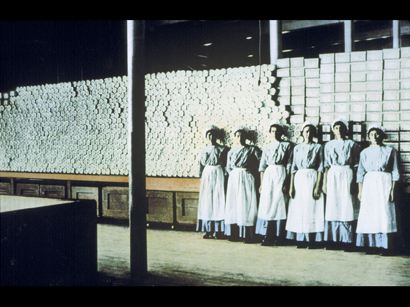 Employees Standing in front of Stacks of Absorbent Cotton Products

In 1918 Robert became the General Superintendent of Manufacturing for Johnson & Johnson.  By that time, the Company was producing huge quantities of sterile dressings, gauze, and other medical products to treat soldiers fighting in Europe in World War I.  During the late summer and early fall of 1918, the Company also made gauze face masks to help restrain the devastating 1918 flu epidemic that was sweeping through the nation.  People wore these masks whenever they went out in public, to try to stem the tide of infection.  It was estimated that the epidemic killed perhaps 50 million people worldwide.  Closer to home, one-third of the citizens of New Brunswick were infected – about 6,700 people [Robert Wood Johnson, The Gentleman Rebel, by Lawrence G. Foster, p. 137]

Robert’s younger brother Seward commanded a submarine chaser in the Navy, and his sister Evangeline, never one to be outdone by her brothers, was a lieutenant in the Red Cross Ambulance Corps in New York.  When TNT stored at the Gillespie shell-loading depot in Morgan, New Jersey (part of modern-day Sayreville) exploded on October 4, 1918, destroying parts of nearby South Amboy and Perth Amboy, 21-year old Evangeline volunteered for the dangerous assignment of going in and helping the wounded, among still-unexploded shells.

World War I ended in November of that year.  The War Department awarded Johnson & Johnson a special commendation for its outstanding performance during the war, and the head of the American Food Administration, Herbert Hoover praised the Company for its support of the food conservation campaign that was part of the war effort.  Perhaps the most unusual award came from the Russian Minister of War (Russia and the United States were allies during World War I) who presented James Wood Johnson with a silver and gold cigar box.  James had invested in the Neverslip Horse Shoe Company in New Brunswick and it had filled the largest order in its history for horseshoes for the Russian cavalry.

When Seward Johnson’s Navy service was completed in 1919, he returned and joined Johnson & Johnson in the purchasing and planning departments.  Robert would always have the larger role in the Company, but the two brothers would retain a lifelong close relationship.  The stage was set for a younger generation of management with new ideas that would guide the Company into global expansion and decentralization.  Another member of that generation, a cotton mill employee named Earle Dickson, would invent the BAND-AID® Brand Adhesive Bandage, which would become one of the products that would define Johnson & Johnson in the minds of consumers.

Robert's younger brother would have been acutely aware of the flu danger. The flu hit the men serving in the Navy as well, and many chaser men died of it. On the subchasers as well as on the other USN vessels, it wasn't uncommon, at times, for men to be holding their watches anyway, in spite of being very sick. Do you know which submarine chaser was Seward's command?

That's a good point about Seward Johnson as a Navy person being acutely aware of the dangers of the 1918 flu epidemic. I looked through our archives and according to what we have, Seward Johnson was second in command on Submarine Chaser 255. He had experience in sending coded messages by semaphore, blinker and flag signaling, and was able to use that experience on the Sub Chaser to be the first to understand coded messages from the flagship, with the result that he could answer before any other vessel.

I have a question?? how does Johnson & Johnson became the name of the company why it is not only Johnson?? i need it for my homewrk

The company is called Johnson & Johnson because it was founded by two brothers -- James Wood Johnson and Edward Mead Johnson, so it is named after both of them. James and Edward had an older brother, Robert Wood Johnson, whose idea it was to start a company that would produce the first commercial sterile surgical dressings in the U.S. (Before that, surgeons used unsterilized cotton to bandage wounds during operations, causing life-threatening infections. The Johnson brothers' dressings helped patients survive surgery.) Robert had been a partner in another medical products company called Seabury & Johnson and couldn't join the new company at the beginning, so his two brothers started Johnson & Johnson in 1886 and a few months later Robert joined, when he was free of his obligations to the other company. Many companies in the 1800s and early 1900s were named after the founders -- Johnson & Johnson, Seabury & Johnson, Bauer & Black -- so it was common for people starting a company to name it by using their last names.

I work for UPS and we're working on a presentation of leaders in healthcare.

I was wondering how to go about getting permission to use photos of Robert W. Johnson, Jr.

Your help would be most appreciated.
Kind regards,
Karen

Please see my e-mail to you for details about how to request permission.

can u tell me more about ROBERT WOOD JOHNSON history in chinese..please..i admire him so much..because i want 2 write a report about a successful leaders..hope you can help me..thank you for your help first..

Unfortunately, I'm unable to post information about Robert Wood Johnson in Chinese. But please feel free to translate any information on the blog that you need to write your report.

Best of luck with your report.

can u give me more about robert wood johnson what techniques and menthods he use 2 manage he company..thank you..

I am writing a book about building a culture of ownership based on lessons from early 20th century leaders who did it (Wiley, July 2010). Other than this very interesting blog posting, I'm having trouble finding much about Robert Wood Johnson Jr. Are there any published books or archival sources you would recommend? Thanks a million. Joe Tye (joe@joetye.com)

In reply to by John Klacik 111

General Robert Wood Johnson, who had lived at Bellevue Farm as a child and as young adult, gave the house and 30 acres of land to the Cenacle order in 1949. The connection was through a mill superintendent at Johnson & Johnson who had taken the teenaged Johnson under his wing when he began working at J&J in the Nineteen Teens. One of the mill superintendent’s daughters was a nun with the Society of Our Lady of the Cenacle, and Johnson, remembering the mill superintendent’s kindness to him, donated the property to the order. We don’t have any records here regarding who the caretaker was. Perhaps Highland Park’s historical records could shed some light on that.

Hi Margaret the caretaker was my Grandfather John Klacik Sr but there is nothing mentioning him anywhere I think it is sad that that part of the history is lost . We lived in the house that was set far away from the cenacle . As far as I know My grandfather was also the grounds keeper for all Johnson property peracel and other areas . He lived there from the 20s until the day my grandmother died in 1985 then the property was given to the cenacle why did they sell it how could they sell it was that part of the deal was it for them to sell lot of things I would like to know .

Thanks for returning a piece of history to Johnson & Johnson with the information about your grandfather! We don't have any records about the Cenacle or their decisions; you would have to check with them regarding that part of the house's history.