The Passing of the Torch 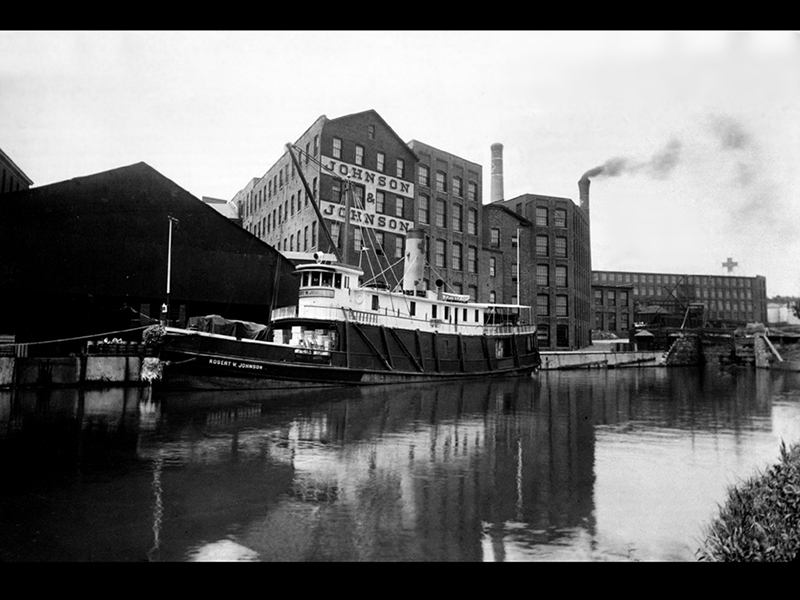 The year 1910 was a pivotal one for Johnson & Johnson. The company was doing well and growing, with a variety of product lines that included medicated plasters, sterile surgical dressings and sutures, but also products for women’s health, baby products, hygiene and personal care products, and more.   Robert Wood Johnson was president of the company, and with his brother James, Fred Kilmer and others, he steered the direction of Johnson & Johnson.  From the time he was five years old, Robert Wood Johnson’s eldest son Robert had accompanied his father to business meetings. 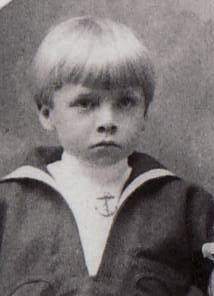 Throughout his childhood, Robert had continued to visit his father’s factories and offices.  He had a serious temperament and was very interested in the workings of the business, the products made there, and the workers, and he asked a lot of questions that the staff was happy to answer. 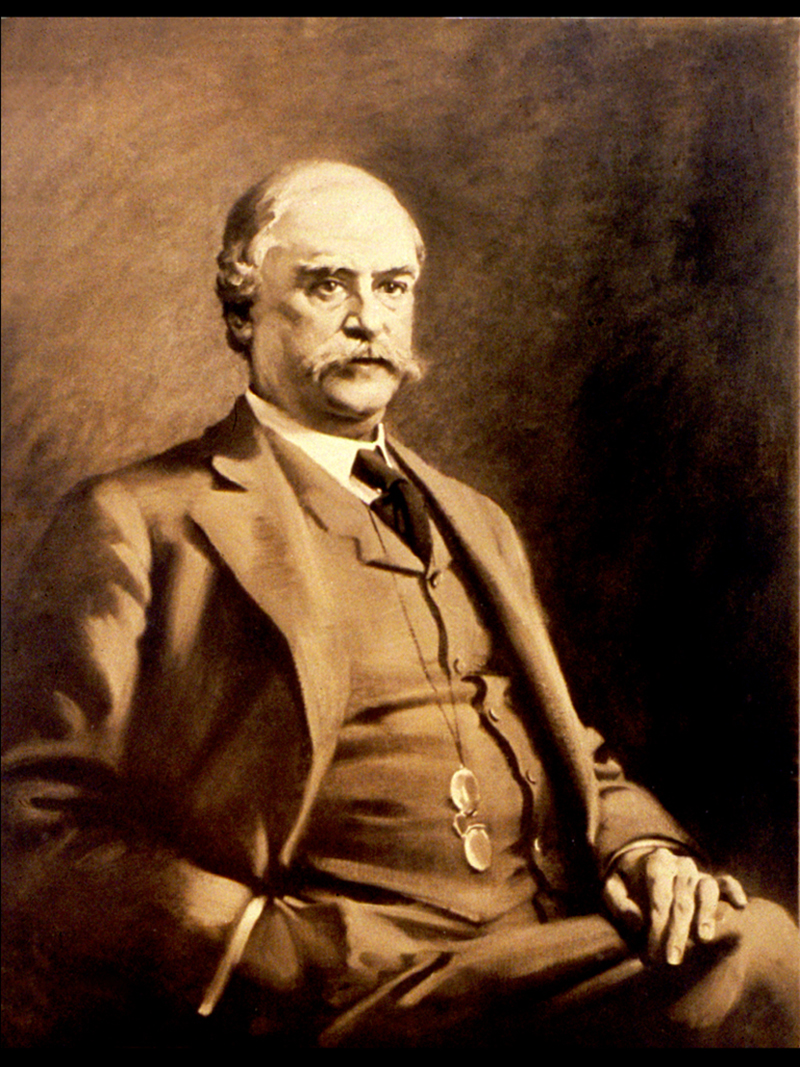 Robert Wood Johnson the first had always enjoyed good health, so it was unusual when he left work early on January 31, 1910, complaining of not feeling well.  When he felt too ill to attend the company’s annual stockholders meeting the following day, everyone knew that something was seriously wrong.  (Johnson & Johnson didn’t become a publicly traded company until 1944, so a stockholders meeting in those days consisted of the company’s top management.)  Johnson’s family physician visited Gray Terrace several times before announcing that Johnson had of Janeway and Carpender wallpaper plant fame -- were another prominent New Brunswick family, and Dr. Janeway had been the consulting physician to Presidents Grover Cleveland and William McKinley.   Here’s a picture of Dr. Janeway and a little more information about him.  Unfortunately, all the two doctors could do was to make Johnson comfortable.  Robert Wood Johnson died eight days later, on February 7, leaving his wife, his children, and 2,500 employees.   His oldest son Robert was 16 years old. 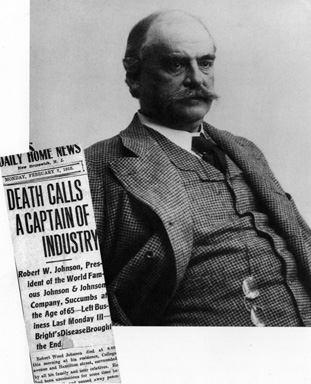 At Johnson & Johnson, the mood was gloomy.  Robert Wood Johnson the first was so vigorous, energetic and brimming with ideas that many were not convinced the company would continue to prosper without him.  However, Johnson had the foresight to ensure that, besides his brother James, the company had strong managers in place that could continue the business on the same trajectory.

Johnson’s funeral was held on February 9, and it was the largest funeral New Brunswick had seen.  Over 1,000 Johnson & Johnson employees gathered at the plant and walked to Gray Terrace to pay their respects – the line stretched from the Johnson house (which was at the corner of College Avenue and Hamilton Streets) all the way back to Johnson & Johnson.  Members of the city’s civic, religious and charitable organizations also paid their respects.   After the funeral service, mourners lined the mile-long route to Elmwood Cemetery.  When Johnson’s burial had to be delayed for a few days because the ground was frozen, it was a measure of the respect and loyalty he inspired that a group of his employees formed a 24-hour guard at the temporary vault.

Fred Kilmer wrote a tribute to Johnson that said, in part:

“ ‘When once convinced that an article which he could manufacture would save life and prevent suffering, he caused it to be manufactured and placed before the [medical] profession irrespective of any consideration of profit.’ ”  [Robert Wood Johnson, The Gentleman Rebel, by Lawrence G. Foster, p. 109]

If that philosophy about putting patients first sounds vaguely familiar, Johnson’s son Robert would later clarify many of the values he learned from his father into Our Credo.

On February 18, the board of directors named James Wood Johnson as the company’s new president.   James, who was quieter and more laid-back than his brother, hastily assured employees that “My policy was my brother’s policy…My brother’s policy is my policy.”  [RWJ the Gentleman Rebel, p. 109] 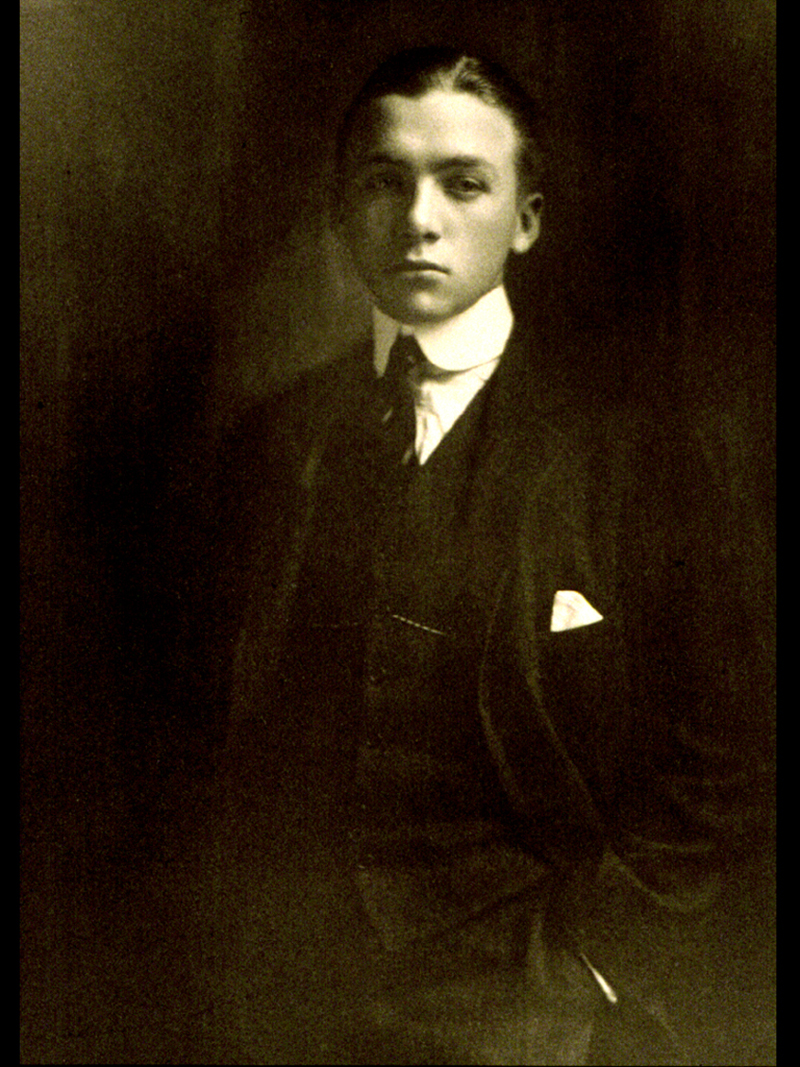 Johnson’s eldest son Robert struggled to adjust to his father’s death.  He returned to Rutgers Prep to complete his junior year and in the summer, asked if he could take a job at the factory.  Robert bonded with the workers, especially the Hungarian immigrants.  He was also living with his uncle James, his mother and siblings having left Gray Terrace for New York.  As a result, when Robert graduated from Rutgers Prep, he made a momentous decision:  instead of going to college, he wanted to join the company.

I have a photo of a Dr Johnson that my grandmother used to date in the 1940's. My mother said it was Dr Johnson of Johnson and Johnson. My mother was thrilled when he bought her ( a 7 or 8 year old her 1st white fur coat, and I was wondering if you might know who he is......??

Do you have any more information on Dr. Johnson? He was not one of the Johnson family who founded the Company(in the 1940s, the two members of the Johnson family in Company management were Chairman General Robert Wood Johnson and his brother, Seward Johnson, neither of whom were doctors.) Coincidentally, there were, and still are, a number of Johnson & Johnson employees with the last name "Johnson" who are not related to the family who started the Company. Your Dr. Johnson most likely was one of those who shared the same name.

Great Company!
I admire You.

Thanks for being a company built on integrity.

I am researching Johnson & Johnson for a mock crisis briefing at CSULB. We have to respond to the TSS breakout and scare from the early 1980's. Thank you for this quick bio on the founders it will help me greatly in my establishment of logos for the company.

Very interesting history and I love the credo. Would also love to do work for Johnson & Johnson! We have a construction company in Lancaster, PA

very nice reading about history of a good firm.

Great information on how the brothers succeeded. It's always good to learn about history, especially about Johnson & Johnson.

I stated researching my family tree and discovered that I am related to Robert Johnson. He is one of my great-great relatives. I Volunteer for the Geneological Society in Enterprise. So neat to find out who all you are kin to. As the family came to America, and settled in different areas. God Bless Everyone in the Company!!!!! As I have read many of the original employees where in fact kin to Mr. Johnson. Most were cousins, Neices and nefs.

This is a very interesting story. I began reading because I had to write a short story on empathy for (A Fortunes's top 10)company employees. I chose Johnson&Johnson because it is a well known name and now I'm glad I did! I didn't plan on reading so much in to it, but now I plan to read further. A great family the Johnsons were/are. Employees too! Thank You.

I read with great interest the history of Johnson & Johnson, but the commercials I see on television just say the The Johnson Company...why is it abbreviated? Thank you.

In reply to by Greg Riedi

Thank you for this intersting information,
and actually i have heared astroy like this and see what is the results,
is near to yours,
they are currently the first and strongest group in egypt

Wow,That's a beautiful story of how the Co. got its start... until Mr. Johnson passed.I love the Credo value, I believe that all companies should have this same value system, for people and products. The reason that I was looking up the company was because I believe that I have a GREAT IDEA ,that the world will love....And that the Johnson & Johnson Co. Could benefit from,If someone would just give me a little minute of their time . I've had this idea for years but, haven't moved forward on it until, "such a time as this"the cost is soooo minimal it has to be GOD...(smile)I know that this is not a historical comment (I apologize for that)but, in years from now I believe it will be... Thank you for your time, If your are able to forward this to the appropriate people it would be appreciated ,and I know that we will meet again... In the love of the Lord, Christine Taylor, in Ct.

I had been fascinated with your company since 1982, while I was leaving at my natal Country: Dominican Republic. I was inspired by knowing the story of this 5 years old boy going to the meetings with his father, and after his father' death, making a decision of not going to college for working at the Johnson's company.
Because different circumstances, I never applied for job with your
company. Now, that I had the opportunity of reading and listing about your Credo and history, I feel like if I had always been part of you. It is so extrange, but, is a very happy feeling; I fell sad for never applying, and a very deep need to be part of you. I admire your company more than ever! My best regards.

I am writing a research paper on Johnson and Johnson, I am thrilled that this is the company I chose!!! I really appreciate how much authentic information is a available about the their history and philosophy. I think it will be really neat to include an actual response (your opinion) from you in my final paper. Which resources , capabilities, and or activities do you believe are central to the competitive advantage built by Johnson and Johnson? T

I really felt very good while going through the history. This is one of the few companies in the world that keeps the customer as the essence of the business. And develop solutions to counter the problems faced by the customers. And never run after profits. This can be observed by 82's Tylenol case. I love to work for this family if i get an opportunity.

I am actually looking for a job now. After hearing too many stories about how pharmaceutical company squeeze money from their customers/patients unethically, I ask myself do I really wanna do this for a living ?
I have a friend working in Johnson & Johnson, so become curious about the company and start to dig more. I am thrilled and very touched by the story and like the credo a lot! I am always thinking how should be the relationship of credo and financial profits. Do we really have to give up morality to get business done? At least from the story I see Johnson& Johnson does a quite job on this part. Would like to know more and be a part of it now.