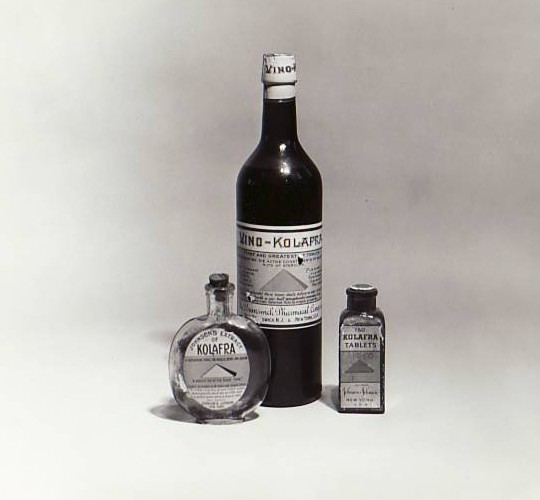 What do Johnson & Johnson and the Coca-Cola Company have in common?  For starters, they were both founded in 1886.   But there’s also something else you might not know:  for a short while, in the late 1800s, Johnson & Johnson made a cola drink.

In an earlier post, I mentioned some of the lesser-known and more unusual products made by Johnson & Johnson in its earliest days.  One of my favorites is Vino Kolafra, which was a tonic preparation made from cola nut extract in a sherry wine base.  It was made by a small subsidiary, the Brunswick Pharmacal Company from 1894 to 1896.   Here’s a Vino Kolafra ad from the November, 1896 issue of, oddly enough, Popular Science Magazine. 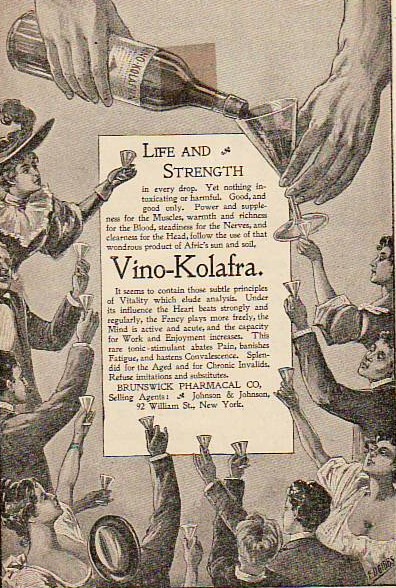 Ads and pamphlets of the time referred to Vino Kolafra as “a Remarkable Tonic.”  And it certainly must have been, judging from its recommended uses.  According to the ads and pamphlets, Vino Kolafra was recommended for athletes, bicyclists (cycling was a popular hobby back then, too), for the weak and overworked, for people convalescing from an illness, for those with weak hearts, as a brain stimulant and nerve tonic, for hay fever, to ward off fatigue and relieve nervous strain, as a cure for drunkenness (especially remarkable, considering the sherry base!), as a reliever of melancholia and nervous depression, to give troops stamina on forced marches, and more.  And if that wasn’t enough, it also was said to help sufferers from indigestion, asthma, fevers, sea sickness, migraines, and the flu….and it was an aphrodisiac.

Here’s a great photograph of two bicyclists drinking Vino Kolafra…from glasses they brought with them on their ride! 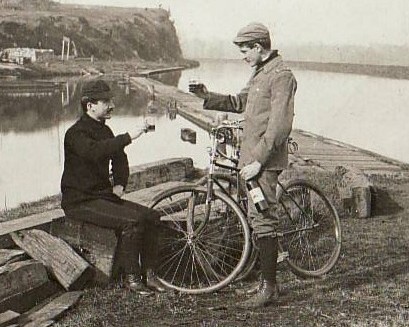 Vino Kolafra wasn’t the only cola product we made.  The Company also sold Koloid Tablets, Essence of Carikola (which combined cola nut extract with extract from the carica papaya, a digestive aid) and Carikola Tablets.  All of the cola products were marked with a distinctive red pyramid on the label. 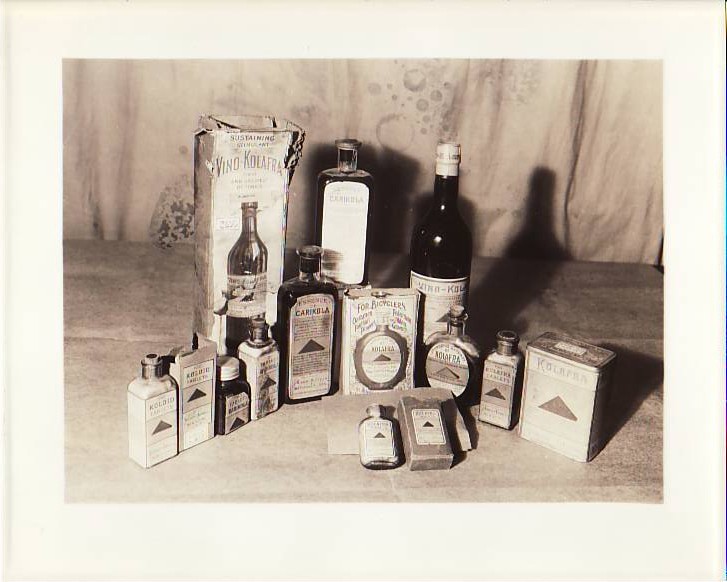 In addition, the Company made Sparkling Kolafra, which was a carbonated drink made from cola nut extract added to sparkling water.   It was advertised as being superior to ginger ale, plain soda and root beer.  An 1897 advertising book for Sparkling Kolafra recommended it for:

The success of Coca-Cola® and other, less reputable tonics, had fueled interest in tonic preparations in the late 19th century.   The Company responded by investigating the properties of kola nut extract (as they spelled it then) and coming up with products.

Vino Kolafra was discontinued when it was discovered that workers in the plant were also investigating its properties:  they were sampling the sherry base in increasing quantities.

Found your article on Vino-Kolafra interesting. Recently saw ad in The Strand Magazine June/1896. Also wondered if you are aware of present location here in Seattle of Johnson & Johnson brothers yacht
"Zodiac"? Built in 1924. 127 ft. on deck. Oak on Oak. Sailed in 1928 Trans Atlantic race. Sold in 1930 to San Fransico Bar Pilots. Restored
ca 1990s here in Seattle and lives to go on to the future. I've often wondered why J&J hasn't figured out how to capitalize (not in a commercial way) on this fantastic historical opportunity. Any comments?

Larry, glad you found the article interesting! While the Zodiac did belong to General Robert Wood Johnson for a while in the 1920s, it was a personal possession and was never part of Johnson & Johnson in any way. It belonged to the Johnson family, so there wouldn't be any plans for Johnson & Johnson to get involved with it. I've seen a picture of it that was taken back when the General owned it and it's a beautiful boat. It's certainly good to know that something associated with General Johnson has been restored and is still around.

While rencently walking along the Raritan Riverbank after a severe reainstorm (New Brunswick, NJ), I retreived a floating bottle with the blob part partially broken off.
As it turns out it is an aqua Kolafra Splits J &J bottle with the name and pyramid embossing on its side. A very cook find indeed!
I would love to find out more about this bottle and the drink!

In reply to by Helmut Kaiser

That is indeed a very rare find! And how great that you found it in New Brunswick, where the product was manufactured about 120 years ago. Johnson & Johnson only made the product for about two years during the 1890s. As the post mentions, there was great interest in the tonic properties of cola in that era, and the Johnson & Johnson cola products were a part of that interest. Without a photo of the bottle, it's hard to give you more information, but if you can email me a picture of the bottle, I will take a look. The blog's email address is kilmerhouse@its.jnj.com.

Thanks, and congratulations on finding a very rare piece of Johnson & Johnson history!

I am wondering when did Johnson and Johnson purchase and sell the patent medicine, Lydia E. Pinkham's Vegetable Compound.

In reply to by Sammy R. Danna

I have recently acquired a bottle of Vino-kolafra from a silent auction at our annual Pharmacy association meeting. Do you think it has enough value that I need to list it on my insurance?

In reply to by Norbert Laskow…

Congratulations on acquiring a bottle of Vino Kolafra! It certainly is a rare Johnson & Johnson historical artifact. I don't have any information regarding its potential value. The best way to determine value would be either to have it appraised or by checking online auction sites and other sites to see if they have information regarding potential value of the artifact.