In my last post, I mentioned Scientific Director Fred Kilmer’s Opera House Pharmacy, which was “very likely” on the on the corner of George and Albany Streets.  Here’s direct confirmation that his pharmacy was in fact on that corner, which is the corner of George and Albany that is across Albany Street from the 410 George Street Building.  Kilmer’s pharmacy was on the ground floor of the old Victorian-style Masonic Hall, whose main tenant was the New Brunswick Opera House.  This photo, which is reproduced here and also linked from Rutgers University’s Old New Brunswick site, clearly shows the sign for Dr. Kilmer’s pharmacy at the bottom left of the photo. 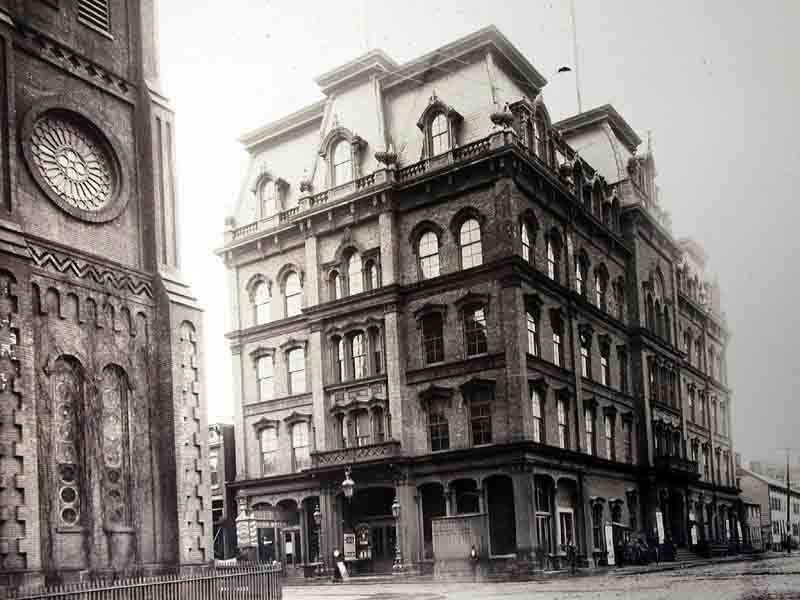 Here’s a close-up of Kilmer’s Opera House pharmacy from the Johnson & Johnson archives.  The distinctive box-like sign identifying the pharmacy is clearly visible in the larger photo, as are architectural details from the bottom of the Masonic Hall. 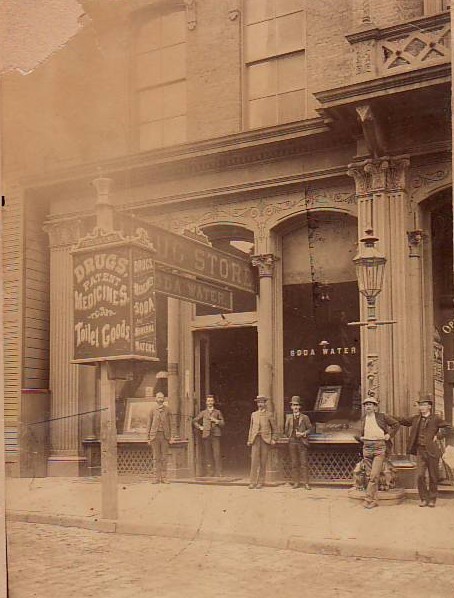 It was at this pharmacy that Fred Kilmer spent hours talking to Thomas Alva Edison, who bought supplies from Kilmer to make his incandescent light, and it was here in 1887 that Kilmer first met Robert Wood Johnson the first, who enlisted Kilmer’s help on Modern Methods of Antiseptic Wound Treatment in 1888, and finally persuaded him to join             Johnson & Johnson in October of 1889. 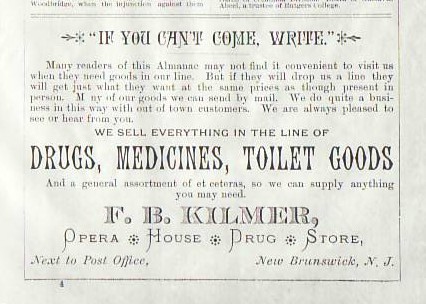 Ad for Kilmer's Pharmacy from the Home News Almanac, 1888

Johnson, who liked to stroll down George Street, had made frequent stops at the pharmacy – a potential customer of his new business – and found a kindred spirit in Fred Kilmer, although their personalities were very different.

Fred Kilmer brought his scientific background, his writing ability and his experience as a retail pharmacist to the new company.  One of Kilmer’s innovations was the RED CROSS MESSENGER, a journal published by Johnson & Johnson for retail pharmacists. 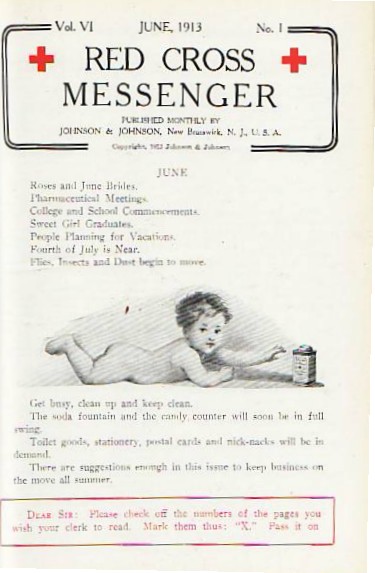 Cover of a RED CROSS MESSENGER from 1912

The RED CROSS MESSENGER had articles about concerns of the day; explanations of the scientific background behind products sold in pharmacies; tips for pharmacists on how to serve customers, display products and increase sales; and numerous pictures from around the world.  Articles about the Company, its products and its people were interspersed between practical tips for pharmacists about running their businesses.  The RED CROSS MESSENGER was widely-read, and the pharmacists and store clerks who read it for its practical information also received a thorough education about Johnson & Johnson directly from the Company.  Here’s an excerpt from a RED CROSS MESSENGER from October of 1912 written by Fred Kilmer, about the importance of window displays:

“We have talked, we have shouted, we have almost screeched, we have preached, we have pleaded, at times we have scolded, sometimes we have suggested, and at all times we have urged the importance of proper attention to the drug store windows, and we are going to keep it up.  In fact, we are going to do more of it.  From now on, THE MESSENGER will give more and more attention to the drug store window – for this we offer no apology.  The value of the show window as a factor in the business is firmly settled…It can be made a force to teach the great public of its needs.”   (RED CROSS MESSENGER October 1912, V.5 No. 6, p. 182)

Naturally, the MESSENGERS contained ads for the Company's products, such as this one: 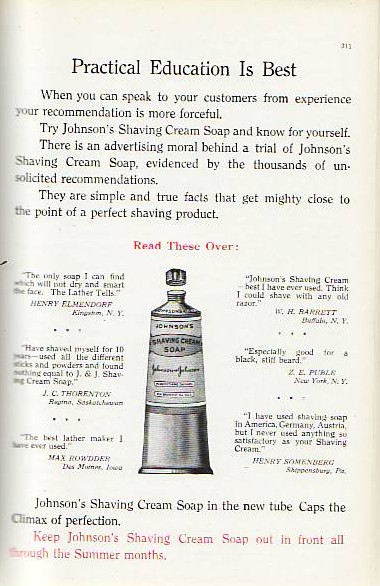 Once a New Brunswick landmark, the imposing building that housed Fred Kilmer’s pharmacy is long gone.  But that former site of Kilmer’s Opera House Pharmacy is, by a strange twist of fate, directly across George Street from a small park…which is named Joyce Kilmer Park, in memory of Fred’s son.

In reading this informative information on Fredrick Kilmer and his conversations with Mr.Edison, I would not be a bit surprised if he also conversed with one of Mr.Edison's co-workers, that had migrated to the United States from Croatia.This highly obfuscated individual was to become one of America's greatest scientist,and inventors the world has ever known; and his patents on devices we now use in everyday life are
still on the cutting edge of technology! [Mr. Edison has been wrongly given the credits of this person's deeds on too many occasions].This
man also later became a U.S. citizen before he died.
His name --- Nickola Tesla !!

Edison visited Fred Kilmer at his Opera House Pharmacy in New Brunswick, often stopping to talk about pharmaceutical compounds, and stepping behind the counter to watch Kilmer perform distillation and other scientific processes, as well as watching soda water being made. Edison also stopped at Kilmer's pharmacy with his wife so he could tidy up his appearance before attending the opera in New Brunswick. We have no records of Kilmer and Nikola Tesla ever meeting, but you never know!

These photos are treasure! Thank you for the informative article.

Some lovely old photos. Its nice to see how things used to be. I've collected lots of old medicine bottles and a big old cabinet from a Victorian era pharmacy so love looking at old pharmacy photos!