Charles James and Johnson & Johnson at the Metropolitan Museum of Art

The Metropolitan Museum of Art in New York just launched Charles James: Beyond Fashion, a new exhibit at its Costume Institute.  James, one of the 20th century’s most innovative fashion designers, was a man ahead of his time.  Some of his gorgeous dresses were featured in a series of ads by Johnson & Johnson during the 1940s that solved the problem of how to advertise a product that nobody wanted to talk about.  The ads were part of the iconic MODESS®…Because campaign, and the Met’s exhibit features not only some of those Charles James dresses, but one of our historic ads as well (and another of the ads in the exhibit catalog), from a campaign that married innovation in fashion design to innovation in advertising.

Johnson & Johnson had pioneered mass produced sanitary protection products for women in the 1890s, providing a needed alternative to the homemade methods that women were forced to come up with for most of history.  Although these products played their part in empowering women, they were notoriously difficult to advertise, because the public from the Victorian era onward considered them to be extraordinarily, well…unmentionable.  So Johnson & Johnson came up with a variety of ways to advertise the products through the decades, including silent purchase coupons beginning in 1928 – which allowed women to buy the product and take it home without speaking a single word.

But that still wasn’t enough, because women did not want to be seen anywhere near an ad for the product.  So during the late 1940s -- the result of a really perceptive idea by General Robert Wood Johnson, and with the help of Cecil Beaton, dress designer Charles James and others -- Johnson & Johnson took its advertising of the product to an entirely new and tremendously creative level.

Like his father, General Robert Wood Johnson was interested in advertising, and he had a keen eye, a sense of what would work and an ability to get to the essence of an issue.  Johnson was in a strategy meeting to discuss MODESS® advertising, and he came to a conclusion:  if women didn’t like to read ads for sanitary protection products, then the ads (which had previously been rather wordy) should have fewer words, maybe just a paragraph.  Maybe just a sentence.  Maybe just two words, and Johnson suggested “MODESS®…Because.”  He also suggested linking the campaign to high fashion.  And who better to link it to than innovative fashion designer Charles James and innovative photographer Cecil Beaton for some of the earlier ads?  It was a brilliant idea.

Charles James was a fashion designer decades ahead of his time.  Largely self-taught, he came up with unique and creative ways of draping fabric to make stunningly  beautiful dresses.  Among his pioneering innovations are the wrap dress, the infinity scarf and puffer jackets, but he was so far ahead of the curve that he frequently didn’t get credit for his innovations.  Perhaps through the connection with Cecil Beaton (a friend of General Robert Wood Johnson and his wife Evie), some of James’s distinctive gowns were featured in MODESS®…Because ads, worn by leading fashion models of the day.  (Models in the ads included Dorian Leigh and Susie Parker, and photographers included Beaton, Ruzzie Green, Valentino Sarra and others.) 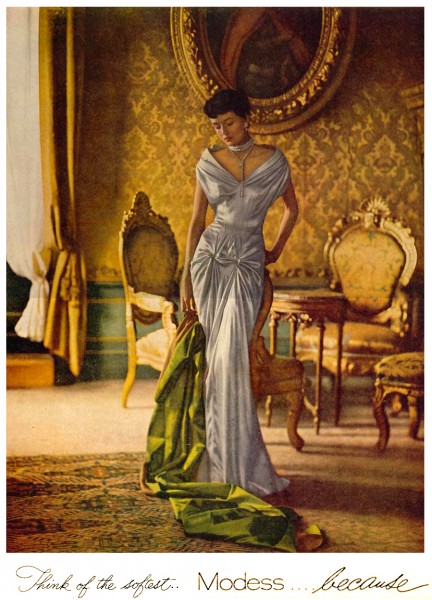 If you didn’t know what the MODESS®…Because ads were advertising, they could be high fashion ads for designer clothing – and that was entirely the point.  Since the meaning of the ads was obvious only to the women who bought the product, and not to anyone else who might be looking at the ad at the same time, women did not feel uncomfortable with the advertising.  In fact, they loved the ads.  Women could imagine themselves in those beautiful and sophisticated dresses from Charles James and other leading designers, posed in beautiful settings.  The two words in the ads allowed them to supply their own reasons for buying the product.  The MODESS®…Because ads connoted elegance and innovation, and they elevated something previously viewed as an unmentionable necessity that no one wanted to think about into something aspirational.  You bought the product because… 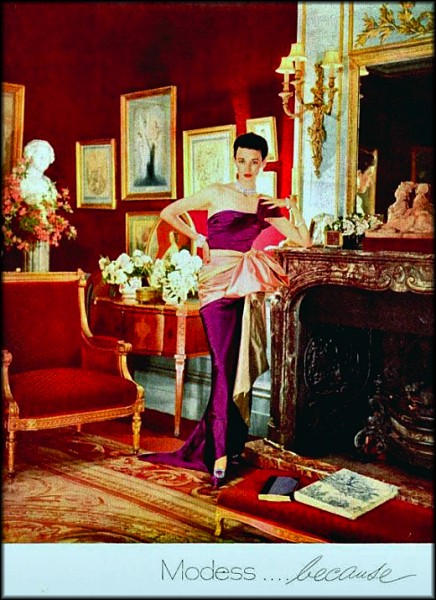 The MODESS®…Because ad campaign was tremendously successful.  It ran until the 1970s, and is considered to be one of the most iconic and effective advertising campaigns of the 20th century.  And now you can see Charles James's creations and one of our MODESS®…Because ads at the Metropolitan Museum of Art’s new Anna Wintour Costume Center, from May 8 to August 10, 2014.

In the meantime,  The New Yorker has a great biographical article about Charles James.  Charles James's gowns contributed to a meeting of fashion innovation and advertising innovation, which formed one of Johnson & Johnson’s most memorable historical ad campaigns.