We have a blog and a museum named after him, but 124 years after he joined Johnson & Johnson, we’re still discovering more surprising facts about Scientific Director and chief publicity officer Fred Kilmer.  Did a narrow escape help influence the writing of the first First Aid Manual?  How did he help inspire our tradition of disaster relief?  And why on earth did he have a pet alligator in his pharmacy?  How well do you think you know Fred Kilmer?  Read on to find out!

1. In 1882 Fred Kilmer was a passenger in a runaway horse and buggy on Church Street in New Brunswick, New Jersey.  The driver stepped out of the vehicle without fastening the horse’s bridle to a post (the equivalent of putting your car in park today), the horse got scared by something and took off running.  The buggy careened out of control and its wheel became tangled with the wheel of a horse-drawn grocery wagon.  When the horses reached Neilson Street (the street in front of the Hyatt Regency hotel today), they ran in different directions, flipping the buggy over and leaving the top – with its passengers – in the road. Luckily, Fred Kilmer escaped with only some bumps and bruises, but the other passenger was seriously injured.  The other passenger was carried to a local business to await the doctor.  Some years later, Kilmer (now working for Johnson & Johnson) researched and wrote the first First Aid manual.  The first First Aid kits – made by Johnson & Johnson in 1888 – were originally designed to treat railroad injuries.  The First Aid Manuals covered much more.  Kilmer described first aid as a bridge between injury and treatment.  Perhaps he was thinking of that long-ago buggy accident and the ways in which first aid training would have been helpful.

2.    Johnson & Johnson began its disaster relief program in 1900, when the Company sent products and financial aid to help the survivors of the Great Galveston Hurricane.  But did you know that Fred Kilmer, before he joined Johnson & Johnson, sent disaster relief aid to help the citizens of Johnstown, PA after the devastating May 31, 1889 flood?  Until the Galveston Hurricane, the Johnstown Flood was the worst natural disaster in U.S.  In response to the call for help from Johnstown, the City of New Brunswick started a fund to help the survivors, and Fred Kilmer contributed medicines “…of the kind most needed by the flood sufferers.”  [New Brunswick Daily Home News, Thursday, June 6, 1889, “Still It Pours In. Brunswick’s Fund for the Flood Sufferers.”]  Later that same year, Kilmer sold his pharmacy to an employee and joined Johnson & Johnson, reinforcing the Johnson brothers’ concern for the community.

3.    Fred Kilmer’s Opera House Pharmacy (located on the ground floor of the New Brunswick Opera House building) sold tickets for Rutgers athletic games as well as theatrical productions and musical reviews at the Opera House.  For Kilmer, always looking for creative new ways of building his business and interacting with the public, it was a way to draw even more people into his pharmacy. Fred Kilmer would bring those talents – as well as his considerable scientific expertise – to Johnson & Johnson.

4.    For a short time in 1887, Fred Kilmer had an alligator in his pharmacy!  It was a very small one, and Kilmer kept it contained in a box so it didn’t wander.  The New Brunswick Daily Home News described the alligator as “a noble little animal with fine, open countenance…”  [The New Brunswick Daily Home News, Tuesday, December 20, 1887]  During one late night while the pharmacy was closed, the alligator escaped its box and went missing. The Daily Home News reported the story and asked that anyone seeing the tiny alligator return it to the Opera House Pharmacy; not only was Kilmer fond of it, but it was a favorite of the store clerks, who were described as “disconsolate” over its absence.

5.    Reflecting the incredibly wide range of his interests, Fred Kilmer was an active member of the New Brunswick Historical Club.  Kilmer was interested in history and understood the importance of documenting and preserving it, as we can appreciate at Johnson & Johnson:  he started our museum and archives soon after he joined the Company in 1889.  [New Brunswick Daily Home News, May 25, 1887, “The Pharmacists.”]

6.    Can you find Fred Kilmer in this undated pre-1889 photo of Kilmer’s Opera House pharmacy?  Well now you can!  Today, cell phone cameras are everywhere, but in the 1880s, photography was a major event.  So there was no chance that the proprietor of a respected establishment such as the Opera House Pharmacy would miss being in a photo of his place of business.  So which one is Kilmer?  As the owner of the pharmacy and as a respected scientist, he wouldn’t be one of the more casually dressed people in the photo – he would have stood up straight and been as formal as possible.  In case you haven’t figured it out yet, Fred Kilmer is the figure all the way on the left – as confirmed by an 1889 illustration of him from The New Brunswick Daily Home News – which matches the facial features and style of facial hair of the figure on the left. 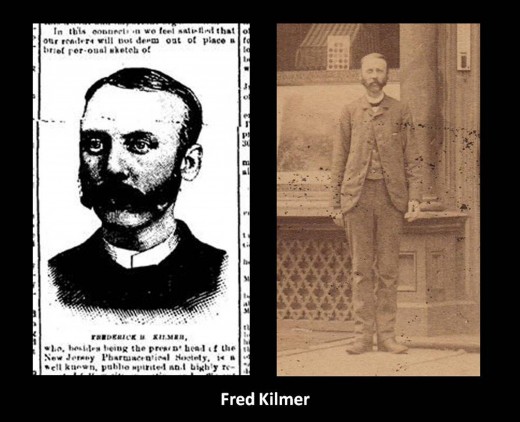 Loved the latest article. Keep up the good work!

I love these articles about Fred Kilmer. Having recently read the Gentlemen Rebel autobiography as a new hire to J&J (should be compulsory reading!) I am fascinated by the impact Kilmer had on J&J - he was a true innovator, collaborator and knowledge sharer - skills that we yearn for today inside J&J. Keep these great articles coming!

What happened to the pharmacy/Opera House after Kilmer joined JNJ? Thanks.

Fred Kilmer sold the Opera House pharmacy to one of his employees when he joined Johnson & Johnson, so it continued on, at least for a while.