Recently, some Johnson & Johnson Family of Companies employees who are trained emergency responders were featured in a video story as part of our ennTV program.  It’s a great story about how their training and abilities helped save the life of a fellow employee. Emergency response teams are a long tradition at Johnson & Johnson, and are part of a legacy of employee health and safety that goes back more than a century…including a surprising team member:  General Robert Wood Johnson. 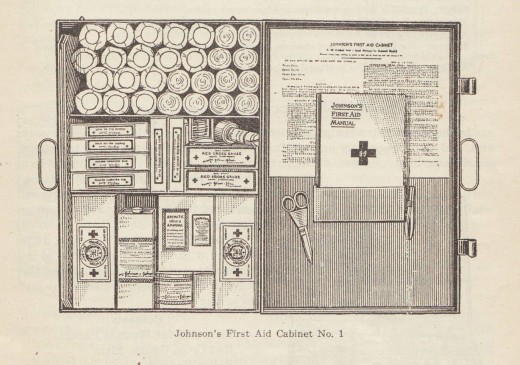 For a Company that pioneered sterile surgical dressings and sutures, commercial First Aid Kits and First Aid Manuals, and published free health information for the public, it was only natural that the same focus on prevention, care and treatment extended to its employees.  So Johnson & Johnson had on-site medical care and medical facilities, employee educational classes, exercise facilities and more.

Largely through the efforts of Fred Kilmer, Johnson & Johnson trained its own employees in first aid techniques and best practices to provide, as Kilmer put it, a bridge between injury or illness and medical treatment.  Here’s how it worked a century ago:  if an employee felt ill or was injured, a phone call or a messenger was sent immediately to the office of the superintendent.  (If anyone's wondering, we had phones back then:  Johnson & Johnson was an enthusiastic early adopter of technology – including telephones!)  The foreman or forewoman in charge of the department in which the illness or injury occurred would then send the closest trained employee emergency response team.  Here’s a 1909 excerpt from the instructions for the First Aid Staff:

“Members of the First Aid Staff and all others will observe the following:  In all cases treatment is to be carried out in accordance with JOHNSON’S® First Aid Manual, giving particular attention to the avoidance of handling any would or injury except where necessary to stop bleeding….The application of any treatment except that of First Aid is prohibited.  Subsequent treatment or medical advice must be secured through a physician.”  [RED CROSS® Messenger, Vol. 2, No. 2, July 1909, p. 192, “Hospital and Retiring Room.”]

If the employee was able to be moved, the Company had stretchers and carrying chairs available so the First Aid team could transport the employee to the  Company’s Hospital and Retiring Room (as it was called back then).  By the way, we still have two of those stretchers in our museum today!

Once in the room, employees received further care or, if they were just feeling ill, they could lie down and rest for a while.  Here’s a description of the Hospital and Retiring Room:

“The room is fitted up with a lounge, couches, easy chairs and all other appliances necessary for the care of ill or injured employees, including a prominent feature, a Johnson’s First Aid Cabinet.  In case of injury or temporary illness the patient is immediately removed to this room and cared for by competent persons.  If the injury or illness is at all severe the patient is placed in charge of a medical attendant, his own family physician, if desired.”  [RED CROSS® Messenger, Vol. 2, No. 2, July 1909, p. 192, “Hospital and Retiring Room.”]

The room was well lighted and well-ventilated -- which in 1909 would have meant windows and perhaps ceiling fans and a transom over the door -- and it was easily accessible.  The floors and walls had a smooth finish and were coated with white enamel, just like our Aseptic manufacturing rooms, so they could be kept scrupulously clean.  The room also had a trained First Aid staff, a doctor and a nurse:

“The room is in charge of a First Aid Staff from those who have previously been trained in first aid work, and also has the assistance of a competent physician and a nurse employed by the Visiting Nurses’ Association.”  [RED CROSS® Messenger, Vol. 2, No. 2, July 1909, “Hospital and Retiring Room.”p. 193]

Each time the First Aid team was called into action, a form was filled out, detailing what happened, how it was treated, and what the outcome had been.  Here’s an example from 1908:

In an era before modern and comprehensive worker safety regulations, the Company’s emphasis on the health and safety of its employees was unusual, and was one of the things that attracted employees to Johnson & Johnson.

It will come as no surprise that Fred Kilmer was the director of the First Aid staff.  The rest of the staff – made up of 12 men and women -- included Elizabeth P----, one of our original employees from 1886; as well as Jordan F---, Laura R--- and Gussie D---, three more employees with very  long tenure.    Robert Wood Johnson, the future author of Our Credo, was 19 years old in 1912, and he was on the First Aid staff as well.  In 1912 he was in charge of First Aid for the New Store House.

In addition to the First Aid team and Hospital and Retiring room, the Company also had comprehensive fire safety measures, predating many of the worker safety regulations that were put into place during the Progressive Era that included the Nineteen Teens and Nineteen Twenties.

“Our entire plant is fitted with the automatic fire-sprinkler system, electric light wiring, all in pipes, and we have a fire department of our own.”  [RED CROSS MESSENGER, Vol. I, No. 5, September 1908, p. 50, “RED CROSS Factory Facts”.]  In addition, all buildings had fire escapes and duplicate stairways.   Johnson & Johnson also held regular fire drills, as well.  Here’s a photo taken during one of them in 1921:

The Company held a first aid training class in connection with The Laurel Club, the organization of women employees at Johnson & Johnson.  In July of 1909, the most recent class graduated 22 employees with first aid training who passed the exam.  Fourteen of those employees received medals for exemplary work done in the class.  These 22 men and women joined the First Aid-squad members in looking out for the health and safety of their co-workers, a tradition that many of our employees proudly carry on today.