125 Ways to Celebrate Our 125th Anniversary!

In 2011, Johnson & Johnson celebrated its 125th anniversary. When the Company began in 1886, the original 14 employees in our first building -- that small former wallpaper factory in New Brunswick, New Jersey -- could not have foreseen that 125 years later, their tiny little business would be a global company with approximately 117,000 employees at more than 250 operating companies in 60 countries. Those early employees were very creative in developing new manufacturing techniques to make the first mass produced sterile surgical dressings and sterile sutures, and that creativity has stayed constant through the generations of employees that followed.  A century and a quarter later, it was on display in the many ways we celebrated our 125th Anniversary around the world.   Here are some of the highlights. 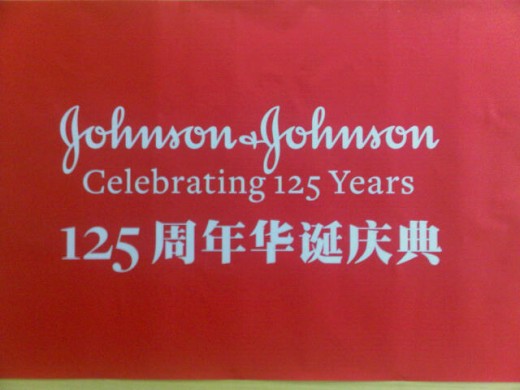 The celebrations around the world ranged from employee gatherings to events that included family members, to very personal acknowledgements by individual employees.  Some of our operating companies around the world also celebrated milestone anniversaries of their own in 2011, and they combined the celebration of their individual milestones with the 125th anniversary of Johnson & Johnson.

Our operating companies in Taiwan held a contest in which employees submitted stories about the memories and experiences that make them proud to work for Johnson & Johnson.  They also held a quiz to test their knowledge of Johnson & Johnson history.

In Germany, employees across all of the businesses celebrated together with year-long stories about our history, posters and an employee event at which the Mayor of Neuss spoke.  Our consumer company in the U.K. held an employee event at the London Science Museum and in Ireland, all of the operating companies got together with an event for employees and their families.  Our businesses in France also held a combined celebration for employees and their families.

Many operating companies took advantage of the nicer weather during the summer months and held their 125th anniversary events during the summer:  Some of our operating companies that held events in the summer were located in Puerto Rico, Austria, the U.K. and Canada, as well as in Ecuador, and in New Jersey and Pennsylvania in the United States.  In Poland, employees volunteered in the community on June 7th to commemorate our 125th, and continued volunteering throughout our anniversary year.

Our consumer operating company in Indonesia held its 125th anniversary event in August, based around helping children in the community.

Employees in Thailand, wearing special “J&J Spirit 125” t-shirts, packed bags of personal care products to help people affected by recent natural disasters in that region.   In Japan, 125th Anniversary planning also centered around caring for the community, with a focus on helping people affected by the earthquake and tsunami in Japan.

Ortho-Clinical Diagnostics, Inc. revived the historical Company tradition of producing postcards (something we did regularly 100 years ago) and mailed 125th anniversary postcards with vintage Johnson & Johnson images to their sales organization.  They also held employee events and put together an employee oral history program.

In Romania, employees in the Janssen organization demonstrated their commitment to the community and the environment by planting 125 trees in Izvor Park in Bucharest.

Our operating companies in Spain held a cross-sector celebration in October at which they inaugurated a time capsule containing wishes from current employees for employees during our next 125 years.

Johnson & Johnson in New Brunswick held its employee picnic on August 3rd.  It was kicked off by ringing the opening bell of the New York Stock Exchange direct from the celebration in New Brunswick….only a short trip across the street from the site of our first building where those 14 employees worked in 1886.

Not only did it commemorate 125 years of Johnson & Johnson, it was the largest – and loudest! -- participation in an opening bell ringing in NYSE history.  It was followed by a day-long picnic that employees joined as their schedules permitted, with food, carnival games, speeches and live music.  Mayor James Cahill of New Brunswick proclaimed the day “Johnson & Johnson day” in New Brunswick, and Canadian country music star George Canyon, who is a spokesperson for one of our operating companies, played a concert for employees and spoke about how products from the Johnson & Johnson Family of Companies help him manage his diabetes and allow him to pursue his dreams.

And in a very personal celebration, an employee at our operating company DePuyMitek, Inc. committed to running 125k on a treadmill in their fitness center to raise money for his company’s United Way Campaign in honor of Johnson & Johnson’s 125th Anniversary.

Employees at the Johnson & Johnson Sales and Logistics Company, LLC had a cake and ice cream social to celebrate, and put together an inspirational paper quilt about what working for Johnson & Johnson means to them.  And since blog readers got a glimpse of the SLC's cake, it's only fair to include one from the celebration at our operating companies in Brazil.

The 125th Anniversary celebration also saw another historical first for Johnson & Johnson and its operating companies:  it marked the largest number of employees in the Company’s history ever to celebrate a milestone anniversary.  It allowed employees at our global decentralized operating companies to come together to celebrate the shared heritage and values of Johnson & Johnson as we look forward to our next 125 years.