A Look Inside Our Original Building

It’s 1887 and Johnson & Johnson has grown in just one year from 14 employees in one building to 125 employees in several buildings.  Our original building from 1886, the four-story former wallpaper factory, is now the plaster mill, filled with machinery designed by founder James Wood Johnson to mass produce medicated plasters.  Now, for the first time, we have an opportunity to see what it looked like inside that building. Let’s take a short walk through. 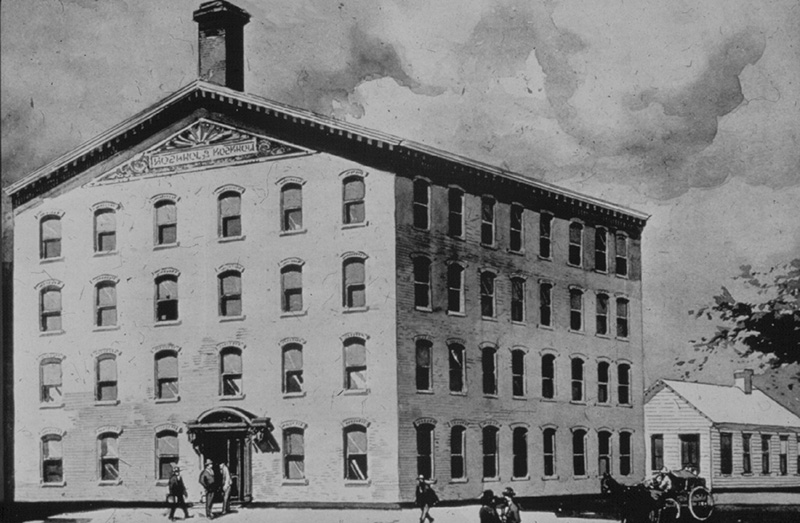 Artist’s Rendition of the First Johnson & Johnson Building from 1886

So how can we go back to 1887 and see inside our first building?  We can do that because we’re fortunate to have in our archives the second article ever written about Johnson & Johnson.  (In case you’re wondering, the first article was a single paragraph in the March 3rd, 1886 edition of The New Brunswick Times, announcing that the three Johnson brothers had rented a building and would soon start operations.) 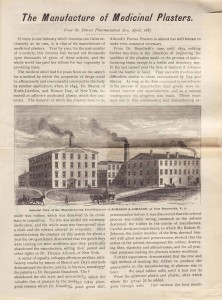 The Second Article Written About Johnson & Johnson, from 1887

In April of 1887, a publication called The Detroit Pharmaceutical Era did an article on the manufacture of medicinal plasters (another name for medicated plasters, the popular medical product of the day).  Since the Johnson brothers changed the way in which those products were made and improved their efficacy, the article focused on how Johnson & Johnson manufactured them. 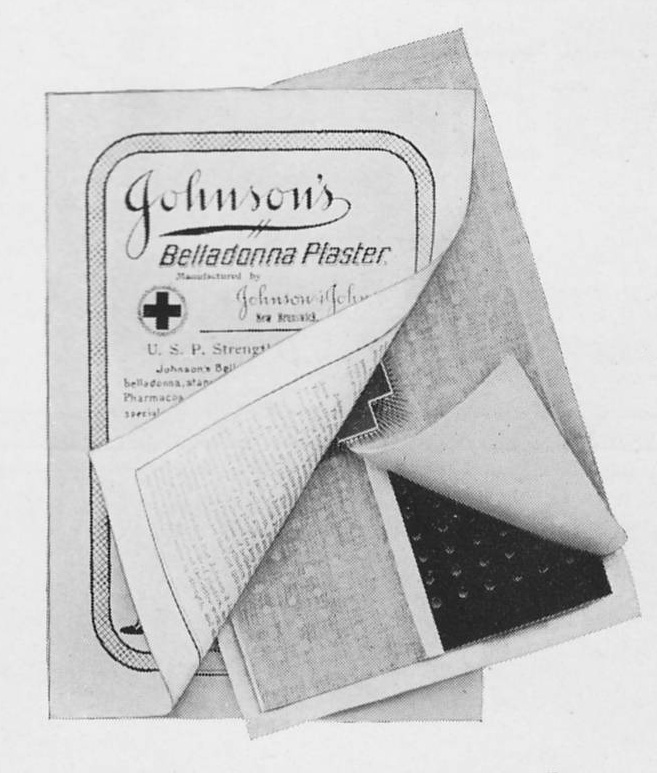 Medicated, or medicinal plasters delivered medicine directly through the skin.  They were made of rubber infused with a medication – commonly to generate heat or pain relief – and they were sticky on one side.  You peeled off the backing and stuck the plaster, or as big a piece of the plaster as you needed, directly over the part of the body needing the medication, and removed it when you were done. 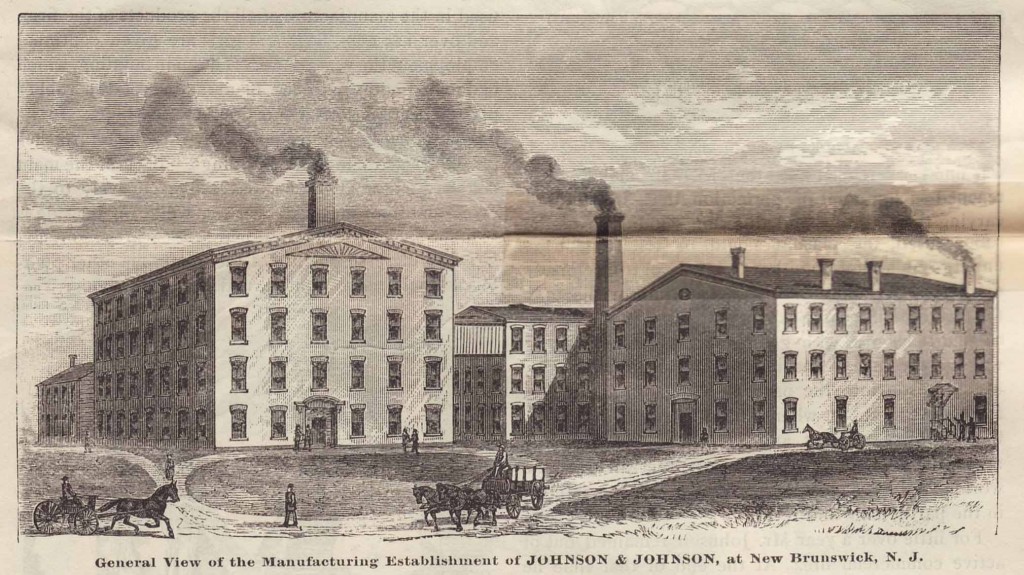 The Johnson & Johnson buildings in 1887.  Our first building, the former Janeway and Carpender wallpaper factory, is the building on the left.

Here’s a detailed eyewitness description of Johnson & Johnson in 1887, from the writer at The Detroit Pharmaceutical Era who came here to do the article:

“The factories of the house of Johnson & Johnson stand back from the depot of the Pennsylvania Railroad at New Brunswick, N.J. about 150 feet.  They are large and extensive, including, as they do, three handsome brick buildings and covering an area of 8,00 square feet, or about two acres of land.  In the neighborhood of 35,000 square feet of flooring are used in the manufacture of all the products of the firm…The main building, which is devoted entirely to the manufacture of the rubber plasters, is of brick and is four stories high.  In its basement is a 200-horse power engine which furnishes power for all three of the buildings.  Back of the main edifice is a smaller one, devoted exclusively to the manufacture of mustard plasters, while on its side is still another brick building five stories in height, devoted to the manufacture of the numerous other pharmaceutical preparations turned out by the house.”   [Detroit Pharmaceutical Era, “The Manufacture of Medicinal Plasters, April, 1887]

The products made in the five story building would have included sterile surgical dressings, sterile sutures, and adhesive tapes.   If anyone’s wondering what that basement engine room might have looked like, it probably looked a lot like this: 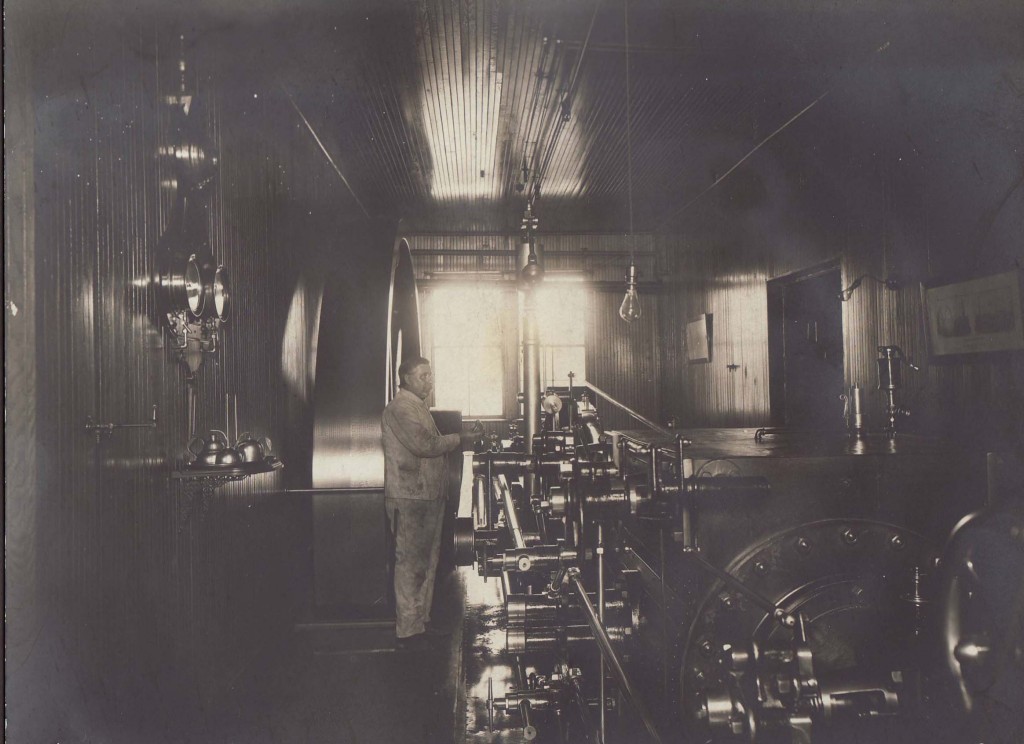 From our archives, photo showing the Engine Room, Old Mill, from 1894.

Here’s an employee in the drying room in our first building, hanging the flattened sheets of rubber that would be used to make medicinal plasters. 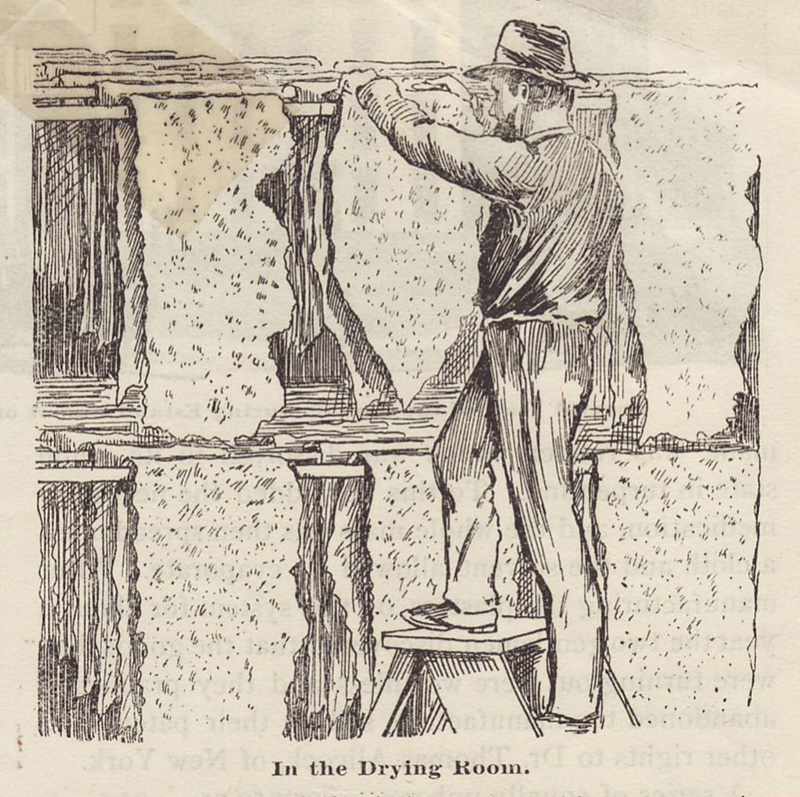 According to the article, the drying room was directly over the boiler room, and the temperature of the drying room was never allowed to fall below 100 degrees.  Despite the heat, the drying process took a full week.  Also interesting is the fact that the employees in the illustrations are depicted wearing hats.  None of our plaster mill employees from the 1800s photographed in our archives are wearing hats in the photos; perhaps the illustrator (or the employees) felt that a hat would be more formal and proper for the important occasion of being depicted in an illustration for an article in 1887.

Here’s an illustration of the plaster mixing and spreading room in our original building.  The machinery was designed by Company founder James Wood Johnson, who was a skilled and creative engineer.  His machinery improved the methods of mass producing medicated plasters. 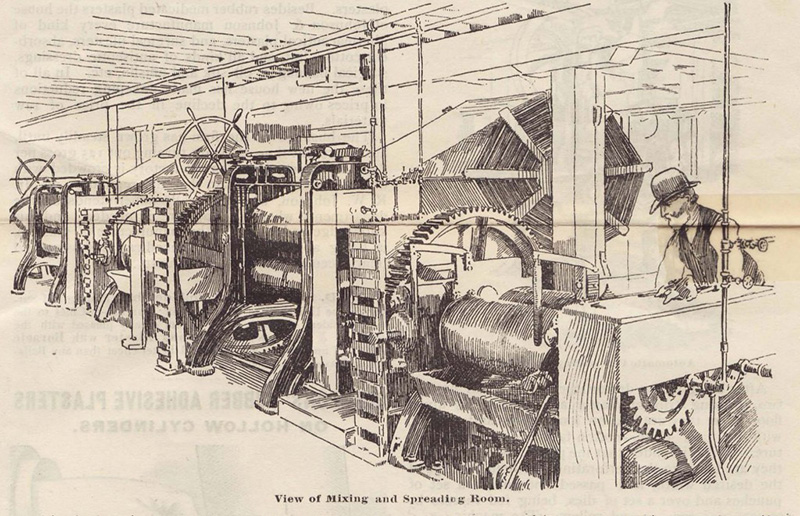 Here’s another corner of our first building, with an automatic perforating machine, for the manufacture of porous plasters -- like the Belladonna Plaster shown in this post.  (Porous plasters got their name from the rows of small round holes, or perforations, in them.)  Interestingly enough, James Wood Johnson didn’t invent this complex machine.  So who did?  Here’s what The Detroit Pharmaceutical Era said:  “The machine is a complicated one that works automatically, and is the invention of Mr. R. W. Johnson.” 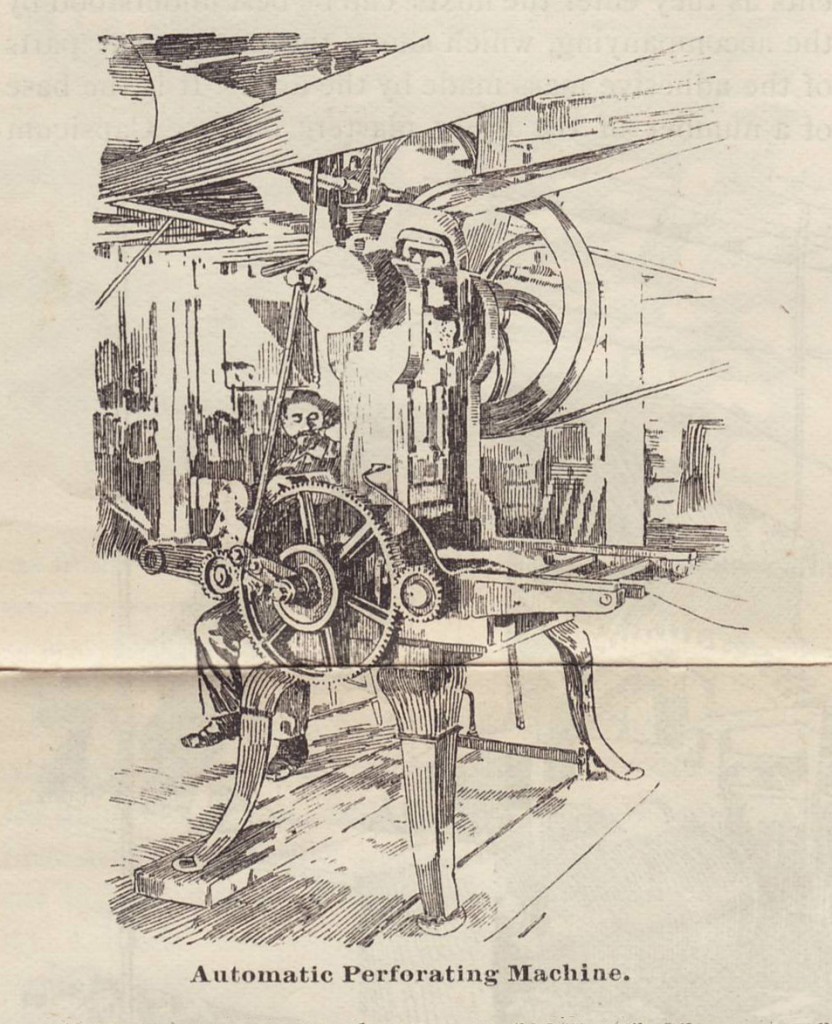 The Automatic Perforating Machine, in our original building

The article described the manufacturing process in detail, and the writer was clearly impressed by the number and variety of products the new company manufactured, because he took an entire paragraph to list them.  The writer wrapped up with an overall appreciation of the entire medicated plaster industry.

“In the entire output of the country fully 160,000 pounds or 80 tons of rubber is used yearly; and when it is considered how small the quantity of rubber material necessary for a single plaster of almost infinitesimal thickness, the full extent of the enormous number made yearly and the magnitude of the industry can be appreciated.”  [Detroit Pharmaceutical Era, “The Manufacture of Medicinal Plasters, April, 1887]

Readers of Kilmer House can certainly appreciate the opportunity to see inside our first-ever 1886 building in 1887, just a year after Johnson & Johnson started, and the glimpse of some of our early innovation in improving one of the most popular health care products of almost 125 years ago.

The name is the wallpaper company is JANEWAY WALLPAPER COMPANY. If you go on Cleveland Avenue in Highland Park (away from River Road), there is a Janeway Street on the left-hand side. Typical of how they named the streets in NB, HP, Milltown (old towns), the street was named for the people whose home and/or farm was located there -- Rutgers, Suydam, Kuhlthau etc. etc. etc.

Very interesting article giving glimpses of how the iconic products were made.Till few years back J& J India used to make products like medicated plaster and adhesive tapes and this article definitely awakens nostalgic memories of these great products.

Excellent article! Please continue providing this type of information so we continue educating ourselves on how Johnson & Johnson has become an icon. I enjoy very much reading about J&J's history!!!

Excellent article! Please continue providing this type information so we can educate ourselves on how Johnson & Johnson has become an icon. I enjoy very much reading of J&J's history.

It is wonderful to see how the how far J&J has come and it is amazing the changes and growth in the 100 years. It is a true blessing to work for such a respected company.

Once again, EXCELLENT and so very interesting!! Thank you for continuing to educate our employees on the roots of this company, which started with very basic and needed products. This gives long-term employees like myself, a wonderful perspective on the growth and diversification of our company.

There were 2 Janeway related wallpaper manufacturers in New Brunswick.

I believe J&C was the larger or the two, but not sure. The image is J&C I believe

The photo of the gentleman in the engine room is my great grandfather taken in 1894. One of his 11 children also worked for J&J and she is honored in the Kilmer page as the first female volunteer to serve in our army as a nurse during First World War in Siberia in 1918. She is buried in the Nurses's section at Arlington National Cementary.

Thanks for this article. I don't know how I missed it the first time around!

I worked in E.S.D.P. from 1969 to 1979 in the Industrial Engineering department. I remember one time finding some very old job descriptions - one that sticks in my mind was for "Cleaning Olibanum using the Dings Magnetic Separator". The Olibanum (A.K.A. Frankincense) must have been used as a scent in an early product. There were also some (frightening) descriptions of the milling of natural rubber to make adhesive - a process that was done on a Banbury Mixer during my tenure.

While I worked in E.S.D.P., there was a retiree, "Doc" Polhemus, who was writing a history of the Plaster Mill. I wonder what became of that, if he ever finished it?