100 Years Ago: A Modern Advertising Campaign

It’s January, 1910: exactly 100 years ago.  It’s the start of a new year and a new decade, and Johnson & Johnson is marking that beginning by launching a major new advertising campaign for one of its consumer products:  JOHNSON’S® Shaving Cream Soap. 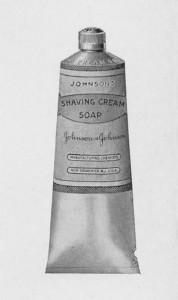 The product had been introduced in the early 1900s, and was developed out of the Company’s medicated soaps that were manufactured for use by doctors, surgeons and patients.   It was it considered to be an excellent product by the consumers who used it, and it came in innovative packaging – a collapsible tube! – but it hadn’t achieved the popularity or critical mass enjoyed by some of the Company’s other products, like belladonna and kidney plasters. 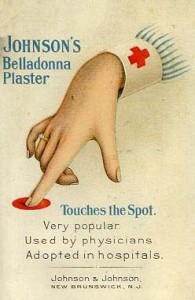 Ad for Belladonna Plasters with its well-known slogan 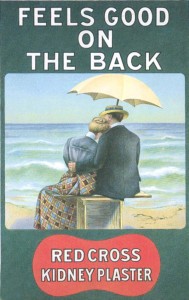 The Famous Feels Good on the Back ad for Kidney Plasters

Those products each had a famous advertising slogan that made its way into popular culture.  The Company was looking for similar ways to attract some attention to JOHNSON’S® Shaving Cream Soap.  So in 1909, they tried this: 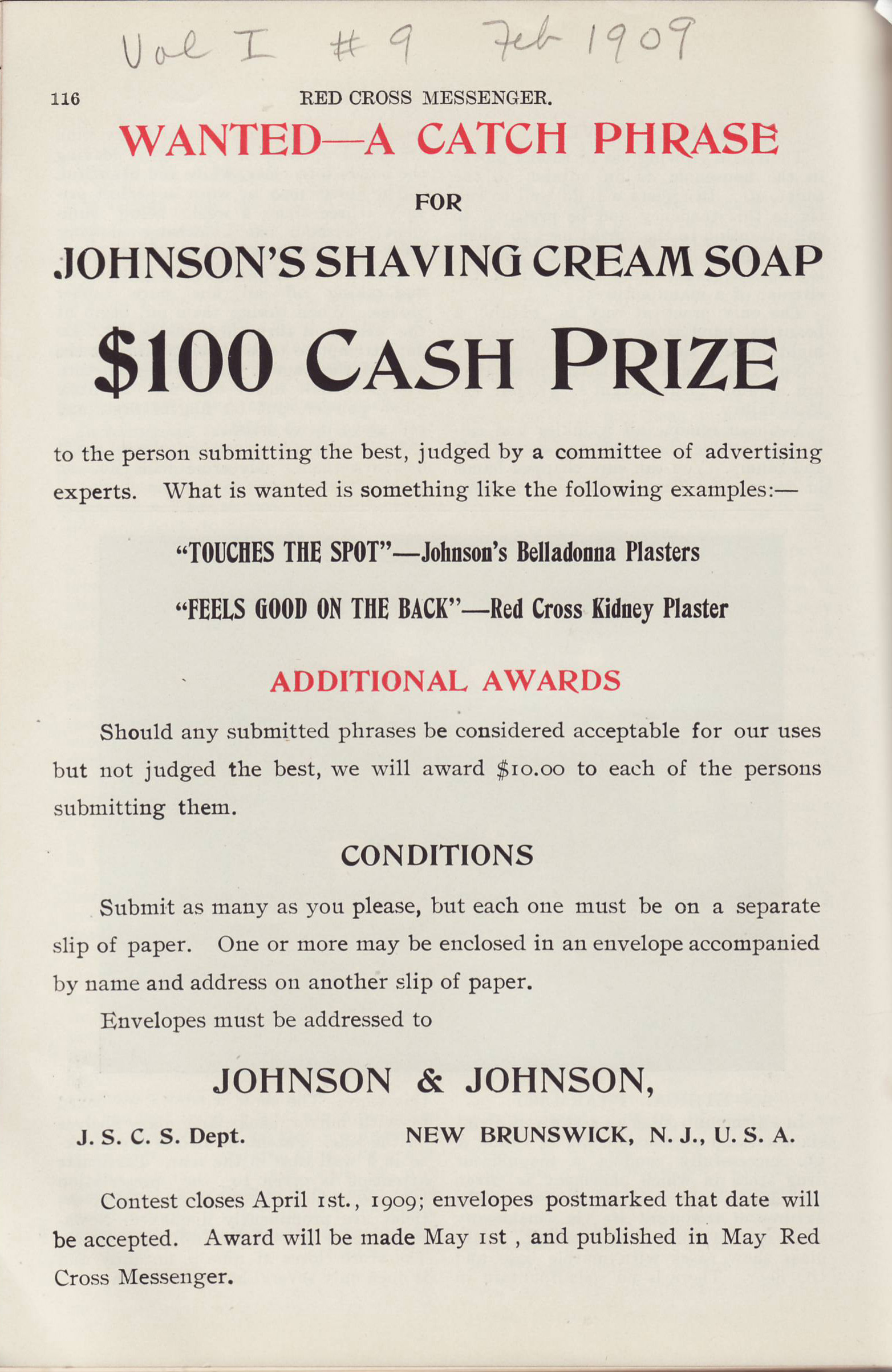 Calling All Retail Pharmacists – we need a catch phrase.  Someone?  Anyone?

When that didn’t achieve the desired result, Company management decided to apply the latest developments in the growing field of advertising to the product, and conduct a “modern” advertising campaign.

In 1910, before radio and television, that would of course be a print campaign.  Fred Kilmer, our scientific director and editor of THE RED CROSS MESSENGER, announced that the target audience would be (no surprise) men who shaved their faces.  Ironically enough, that subset of the population did not include Kilmer, who wrote so extensively about and helped market the product. 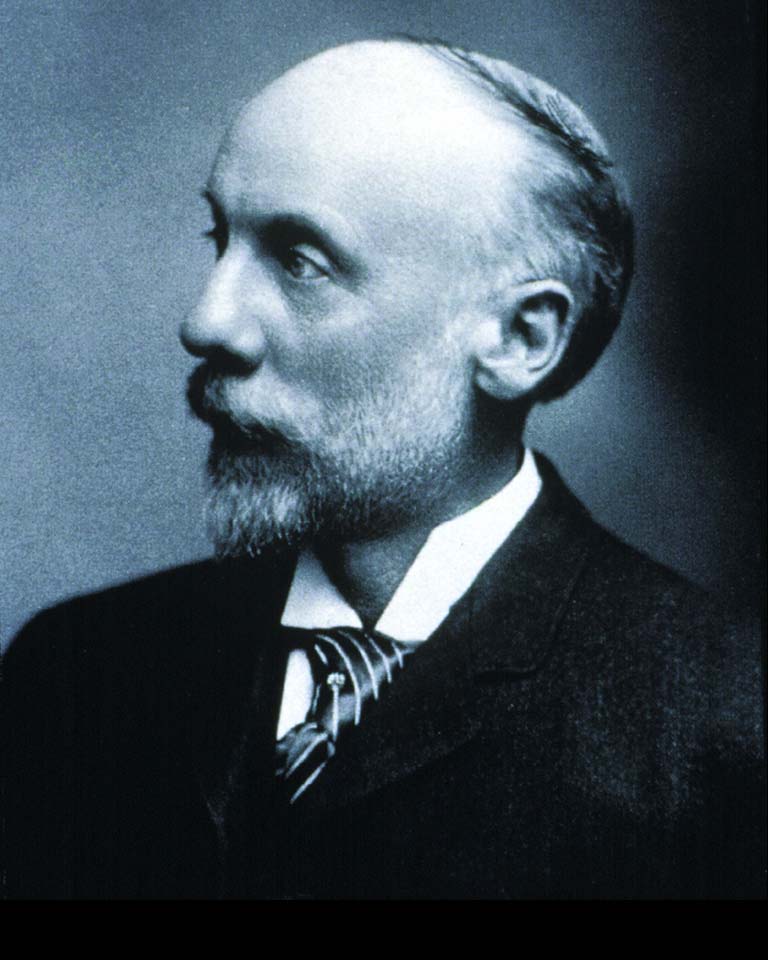 Fred Kilmer, who probably did not use JOHNSON’S® Shaving Cream Soap on a regular basis.

Kilmer, as editor of THE RED CROSS MESSENGER, our publication for retail pharmacists, provided regular updates about the development of the advertising campaign before it launched.  THE MESSENGER printed articles talking about plans for the campaign, how it would roll out, and how retail pharmacists could participate.

“The advertising will run continuously and the space used will be full pages and half pages and prominent locations; in certain instances the advertisements will appear in colors.”  [THE RED CROSS MESSENGER, Vol. II, No. 7, December, 1909,  p. 314]

The ambitious advertising campaign was set to appear in the hugely popular Scribner’s Magazine, to take advantage of former President Theodore Roosevelt’s series of articles appearing in the publication.  System, a magazine targeted to businessmen, was also going to run the ads, as would the Sunday magazine sections of some of the major U.S. newspapers, the Literary Digest, Harper’s Weekly, The Saturday Evening Post and Collier’s, a popular magazine of the era.  Not to miss an opportunity to reach men who needed to shave, the ad campaign also included magazines for military officers, a magazine called Everybody’s Magazine (despite the title, it was chosen because of its large male audience, and it focused on investigative journalism) and The American Review of Reviews.   The ads offered a free trial tube of JOHNSON’S® Shaving Cream Soap to anyone who wanted to try it.  Interested customers would then be directed to the retail pharmacy nearest to them that carried the product.   Kilmer estimated that the campaign would bring an estimated two million new customers into retail pharmacies.  Needless to say, pharmacists were eager to participate.   Kilmer urged them to cut out the full-page magazine ads and exhibit them in their store windows, in order to draw people in. 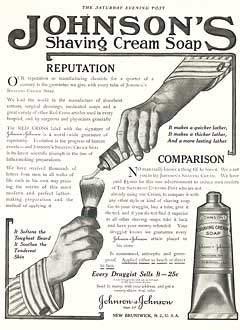 The modern ad campaign was created by the J. Walter Thompson Company of New York, continuing the relationship that started when James Walter Thompson himself started working with founder Robert Wood Johnson on the Company’s advertising.  The ads were designed to be informative and convincing, and used techniques that Thompson pioneered, such as the more sophisticated use of product testimonials. 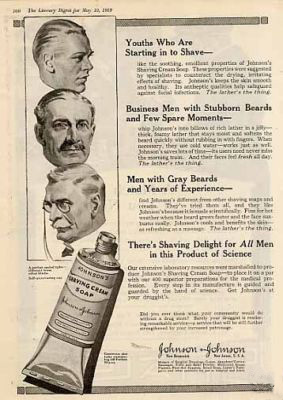 An ad from 1919 using the more modern techniques

According to Fred Kilmer, the J. Walter Thompson agency’s mission was nothing less than the following:

“They will undertake and expect to succeed in placing the merits of Johnson’s Shaving Cream Soap before every man in the United States who has need for it.  It will be their work to send customers to the drug store, and to keep them going.”  [THE RED CROSS MESSENGER, Vol. II, No. 7, December, 1909,  p. 314]

Besides the magazine ads, there would also be a large number of displays, product booklets and other materials for the drugstores selling the product. 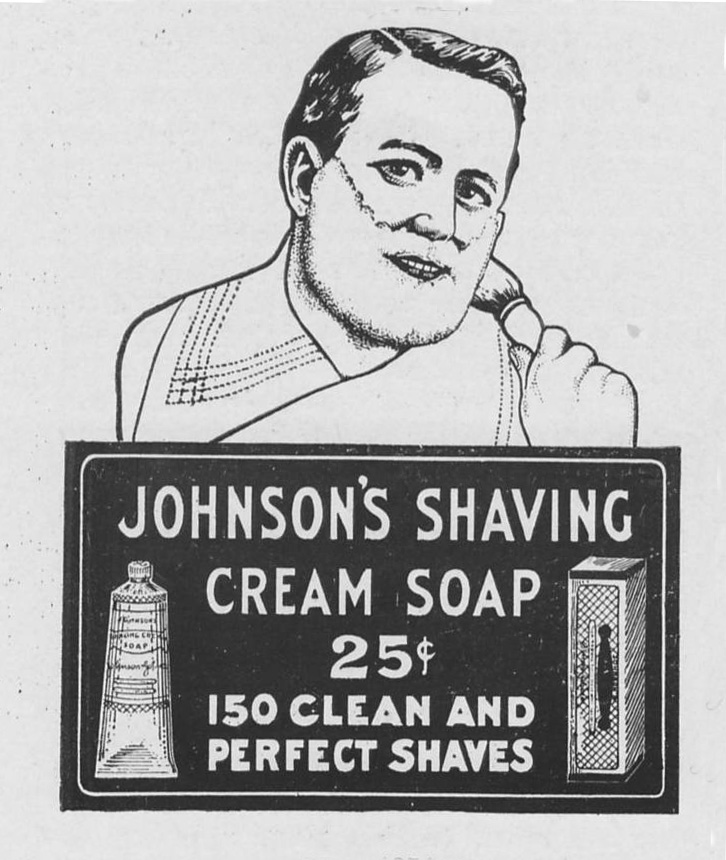 Example of an in-store drugstore advertisement

So why would retail druggists care about the plans for the ad campaign?  Because as Kilmer explained, it wasn’t just designed to sell more JOHNSON’S® Shaving Cream Soap (although that was its primary goal).  It was also designed to get more people into the retail drug stores who sold the Shaving Cream Soap, thus increasing the druggists’ overall business.  So if druggists sold or decided to start carrying the product, they were able to participate in a campaign that had as its secondary goal increasing their business. If you were a retail druggist in 1910, you had to be excited by that.  It was another example of the close and cooperative relationship between the Company and its customers, which dated back to the founding of Johnson & Johnson, and would later find expression in the first paragraph of Our Credo. 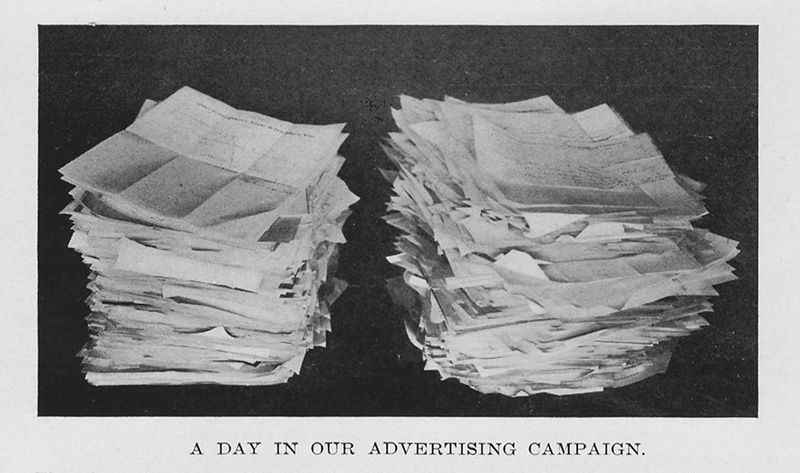 The modern ad campaign was a success, and spurred thousands of letters requesting the free samples from men eager to try the product.  In later years, customer testimonials to JOHNSON’S® Shaving Cream Soap would continue to be used in ads for the product, and be reprinted in THE RED CROSS MESSENGER.   The product never did get a slogan that made it into popular culture, though.