100 Years Ago: Celebrating a New Addition to the Cotton Mill 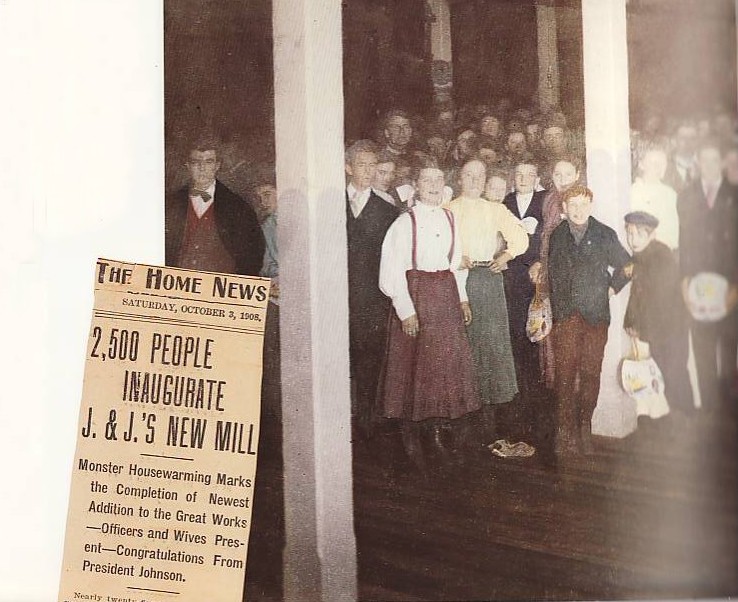 In 1908 Johnson & Johnson completed an addition to the “New” Red Cross Cotton Mill.  The mill had been built in 1901 and just a few short years later, it needed to be expanded due to the growth of the surgical dressings, cotton and gauze business and the need for extra manufacturing capacity.   As was its tradition, the Company held a reception and dance for employees to inaugurate the new building…on the evening of Friday, October 2, 1908 from 8:00 pm to midnight.  Let’s step back to that evening 100 years ago and take a look. 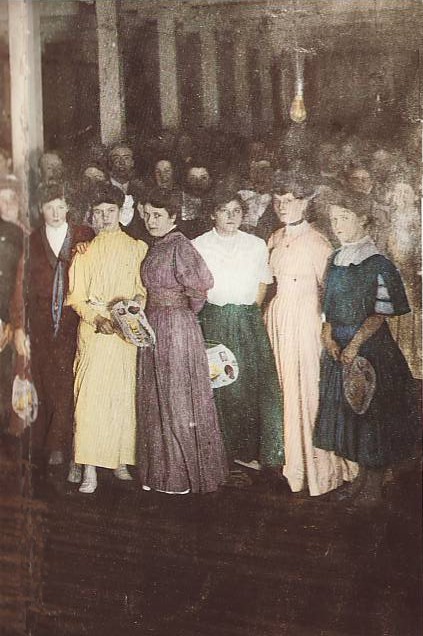 According to Oct. 3, 1908 edition of The New Brunswick Times, the party was “one of the largest and jolliest dances ever held in New Brunswick,” and The Home News estimated that over 2,500 people attended.   The Times went on to mention: “It has been the custom of this firm to have an affair something in the nature of a housewarming in every large addition built to the plant before the machinery is installed.”  (N.B. Times article, “Two Thousand at J. And J. Dance,” Oct. 3, 1908) This was the Company’s way of celebrating its success with employees, and it had a special significance in 1908.  The U.S. had been hit by the Panic of 1907, a financial crisis and recession, but Johnson & Johnson had managed to weather the storm and even continue expanding its plant capacity due to the nature of its products and the prudence of its management. 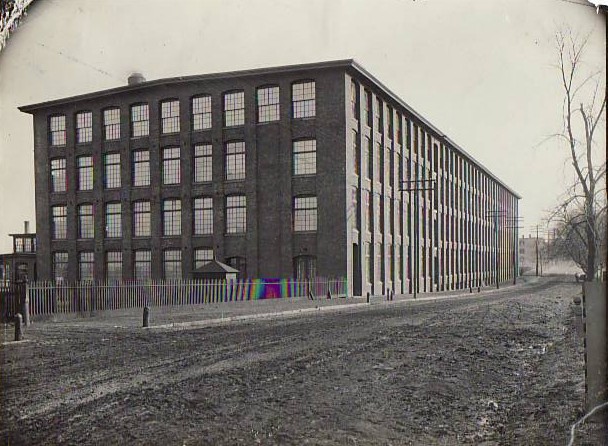 The Cotton Mill and New Addition, 1907.  The dirt road is George Street.

So on that Saturday night in October of 1908, employees and their guests arrived at the addition to the Cotton Mill, which was located exactly where Johnson Hall stands today.  The new addition brought the Company’s campus to 40 buildings and a half million square feet of manufacturing space.  There was such a large crowd in the Cotton Mill that the dance took place on two floors of the huge addition, with Haywood’s Orchestra providing the music on one floor, and Professor Chas. Mezei’s Hungarian Orchestra playing traditional Hungarian music on the other floor for the enjoyment of the Company’s numerous Hungarian employees. Each attendee received a card marked “Refreshments,” which was redeemed for a brick of Neapolitan ice cream and cake. Robert Wood Johnson and James Wood Johnson attended along with their families, and employees received a dance order booklet and a small commemorative spoon as souvenirs.  (A dance order booklet provided space in which to write the names of everyone you danced with.) 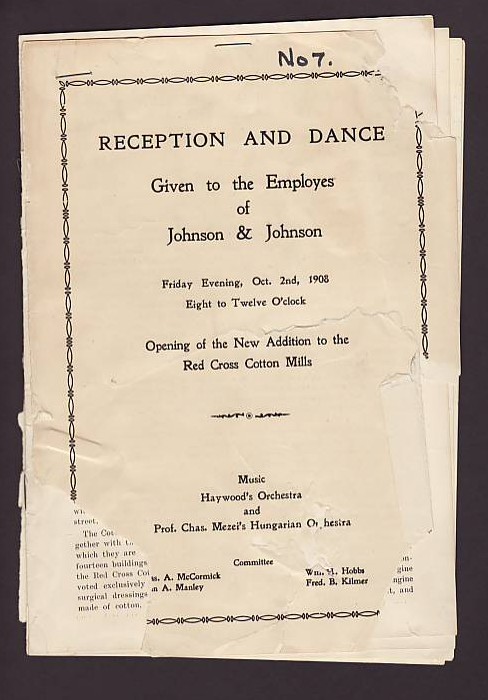 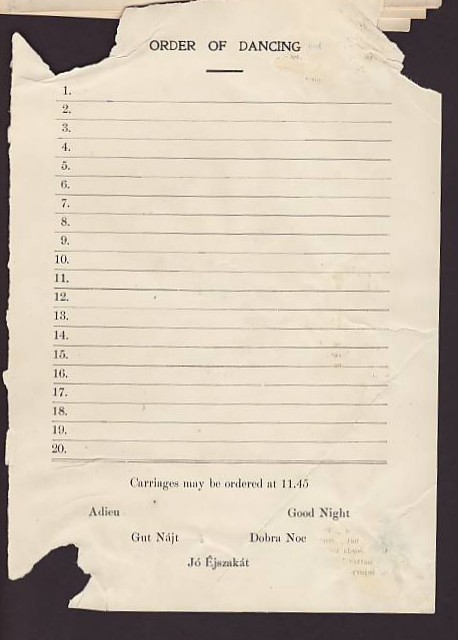 Inside Back Cover of Booklet, Showing Order of Dance Listing

In keeping with the character of the Company, the booklet didn’t just contain space for social information.  It also had a letter to employees from President Robert Wood Johnson, a listing of the Company’s entire executive and supervisory staff (a number of the department supervisors were women, and there was a female scientist in the Scientific Department!), an article on the Company’s history up to 1908, and articles on the Laurel Club and the Company’s Welfare Department (the department that provided medical care and other benefits to employees).  Here are some excerpts from Robert Wood Johnson’s letter: 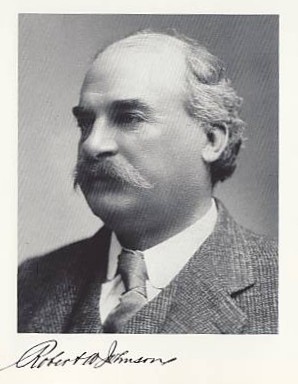 “We are all fortunate, in that we are engaged in manufacturing products to be used throughout the world for the relief of pain and suffering.  We believe that each and every one of us is entitled to some credit and a certain reward for being factors in benefitting [sic] mankind.  Johnson & Johnson have been educators, teaching the world how to treat wounds according to modern methods and how to save life….Johnson & Johnson do not forget that a great part of their success has been due to the skill and care taken by their employees, you all put forth your best effort loyally and jointly, observing all the rules relating to modern wound dressing so that when the products reach the surgeon or the physician he has felt absolute confidence in them.”  “You are carrying out every day rules of cleanliness which have always been our watch-word, and we feel proud of having a force who know and realize the necessity of such supreme care, and who realize that the use of the goods which they prepare may mean life or death to those whom they may be applied.”  “We, therefore take this opportunity of thanking you and to express our appreciation of the good work which you have done not only for Johnson & Johnson but for the world at large.”

The letter shows the camaraderie that Johnson felt for his ever-growing number of employees, and the knowledge that they were all engaged together in an important mission to help people.  Echoes of Johnson’s words from 100 years ago can be seen today in the way we refer to the Johnson & Johnson Family of Companies, as well as in our new Company description:

Caring for the world, one person at a time... inspires and unites the people of Johnson & Johnson. We embrace research and science - bringing innovative ideas, products and services to advance the health and well-being of people. Employees of the Johnson & Johnson Family of Companies work with partners in health care to touch the lives of over a billion people every day, throughout the world.