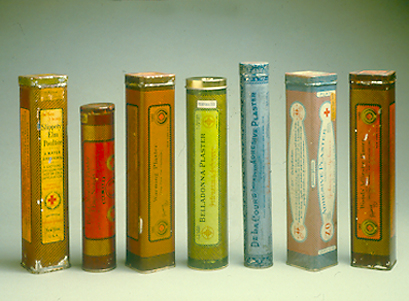 Delivering medicine through the skin seems like the latest cutting-edge innovation, but it’s actually very old.  In fact, some of the first Johnson & Johnson products delivered medications in that way over 100 years ago: medicated plasters.  Medicated plasters were a way for people to apply a treatment directly to an affected area of the body.  They were made up of an India rubber base impregnated with a variety of compounds that delivered pain relief and a variety of medicines. 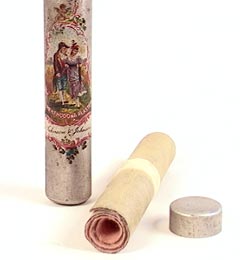 These plasters had a fabric backing and were covered with crinoline (a type of thin fabric), which was peeled off to reveal an adhesive surface that would stick the plaster directly onto the skin.  During the plaster manufacturing process, the India rubber was dissolved and mixed with the medication, and then spread onto the fabric backing to dry.  Popular plasters contained ingredients like belladonna, mustard seed (which provided heat to injured areas), capsicum (the active ingredient in hot peppers, which was used to relieve muscle pain), zinc oxide, quinine, opium and more.  Most plasters were designed to relieve minor aches and pains, or to provide heat to an injured area, much in the way heating pads are used today. 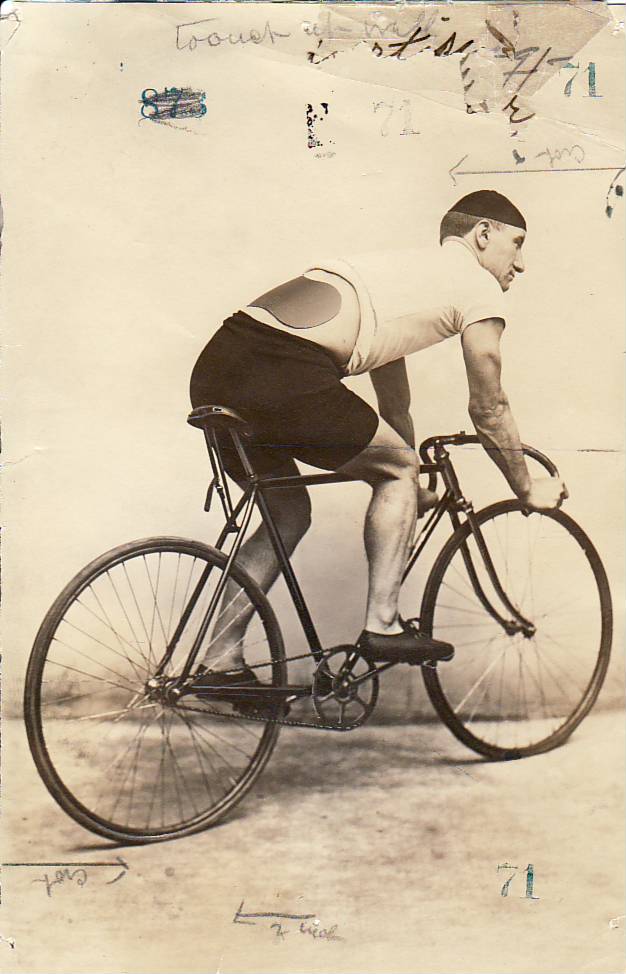 Robert Wood Johnson the first learned how to make medicated plasters as a teenager during his apprenticeship at Wood & Tittamer in Poughkeepsie, New York.  According to the book Robert Wood Johnson: The Gentleman Rebel, plaster making was difficult and frustrating work, and Johnson stated: “‘Probably no other branch of the pharmaceutical art has been the occasion of so much toil, anxiety and failure and discouragement before any measure of success was met.’” As a further illustration of his frustration, Johnson added that during the plaster-making process,“‘Expressive expletives could not be restrained.’” (RWJ: The Gentleman Rebel, p. 13).  During his tenure at Seabury & Johnson, Robert Wood Johnson the first worked long hours with raw materials trying to perfect the company’s plasters.  His younger brother James Wood Johnson, who joined Seabury & Johnson in 1878, used his engineering knowledge to develop plaster-making machinery, a skill he took to the company he formed, Johnson & Johnson, in 1886. 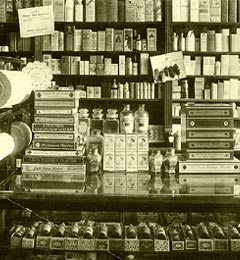 Medicated plasters were sold in pharmacies, which were the main outlets for medical and consumer health care products in the 19th century.  The packages were often very colorful to make them stand out from the competition, as this package of Dr. Grosvenor’s Bellcapsic Plasters shows. 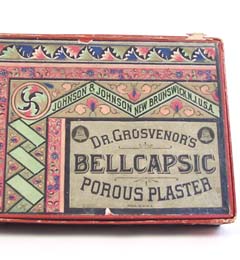 When customers complained that some plasters irritated their skin, the Company's Scientific Director Fred Kilmer sent them a small container of talc to soothe the irritated area.  It was discovered by consumers that the talc was helpful in soothing diaper rash.  They told the Company about their discovery, leading to the birth of JOHNSON’S® Baby Powder in 1893.

I,m a plaster contractor in Massachusetts looking forward to learn more about plaster/plastering services, it was very nice to read your article about plaster products!

I was born in 1945 and as a child my mother always had a small green and orange metal box with a top-snapping lid in which she kept her supply of buttons. This box was always kept in the drawer of her sewing machine. My mama gave me this box when I reached adulthood. I still have this little box with her supply of buttons in it. Inside the lid is this inscription: Remember Benson's Capcine Porous Plaster and Seabury and Johnson's Ready Made Mustard Plasters Are The Safest and Most Useful Remedies for Household Use in Existence. I am curious to know how old this container is. The product sold for 25 cents. Thanks,

That's the most wonderful thing about old tins -- people reused them for all kinds of things around the household. Without seeing a picture of your tin, it's hard to be exact, but it sounds like what you have is a Seabury & Johnson tin advertising Benson's Capcine Porous Plasters, which was one of the signature products of Seabury & Johnson. Seabury & Johnson was a very well-respected medical products firm in the late 1800s. The "Johnson" in Seabury & Johnson was Johnson & Johnson founder Robert Wood Johnson. Mustard Plasters were also very popular,and used the active ingredient in Mustard seed to deliver heat and pain relief directly through the skin. A capsine plaster may have used capsicum, the active ingredient in hot peppers (it's what makes a hot pepper hot) to deliver pain relief. Seabury & Johnson started in 1873-1874. After Robert Wood Johnson left the partnership in 1885, George Seabury continued on for a while, still keeping the name Seabury & Johnson. I haven't been able to find an exact end date for the firm, but sources I've seen say the late 1890s. So your tin would likely be from some time in that period. Here's a post on Seabury & Johnson: http://www.kilmerhouse.com/?p=1043 And here's a very beautiful ad for the Benson's Capcine Porous Plasters advertised on your tin: http://s55.photobucket.com/albums/g128/davidbellel/david2/?action=view&current=184518-1.jpg

we have a johnson and johnson medicated plasters tin box. it is black with red and gold lettering, measures 14 1/2 wide, 13 1/2 high, there by 9 inches deep. there are 5 drawers labled for the different types of plasters. this must have been a store display item. do you have any information about this box? thank you, bill

You do indeed have a drugstore display item. In the days before supermarkets, our products were sold to the public by retail pharmacists, and your medicated plaster case would have been on a drugstore counter. The drawers would have held different types of medicated plasters, which consumers could buy individually. Mustard plasters were one of the most popular, and they provided heat. Other popular plasters like capsicum plasters (using the active ingredient in hot peppers) provided pain relief. Johnson & Johnson provided these display cases to retail pharmacists to help them sell the plasters. It was also wonderful advertising for the Company, and got its products front and center on the drugstore counter, rather than out of the way on a shelf behind the counter.