Johnson & Johnson Chairman and Chief Executive Officer William Weldon rang the closing bell at the New York Stock Exchange this week (on Monday, August 3rd) to commemorate a big upcoming anniversary: our becoming a publicly traded company.  On September 24th, it will be 65 years ago that Johnson & Johnson went from a privately held company to a publicly traded one, with a listing on a famous institution that was started in the 1700s by a bunch of men meeting under a tree in New York City:  the New York Stock Exchange. 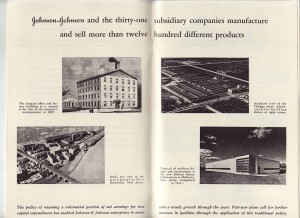 The year of the Johnson & Johnson initial public offering of stock – 1944 -- was toward the end of World War II, the year in which the tide of the war had continued to turn, leading to the Allied victory the following year.  It was an election year, with President Franklin Delano Roosevelt decisively winning re-election for an unprecedented fourth term against Thomas E. Dewey.   Kidney dialysis and sunscreen were invented that year, gasoline cost an average of 15 cents a gallon, and a loaf of bread was ten cents.  In the U.S., people were still growing victory gardens to help ease shortages in the public food supply due to the war effort, and popular films out that year starred Humphrey Bogart (To Have and To Have Not), Edward G. Robinson (Double Indemnity) and Judy Garland (Meet Me in St. Louis). 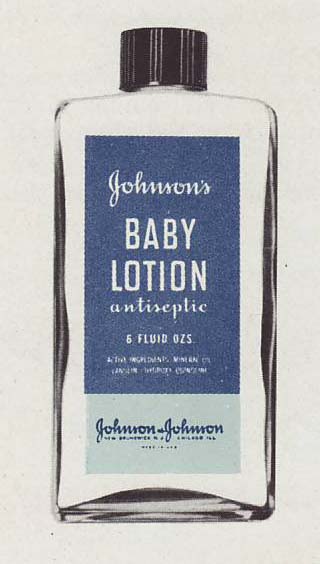 In 1944, Johnson & Johnson had 31 operating companies (compared with the more than 250 that we have today), with 17 of them outside of the U.S.  We had just launched JOHNSON’S® Baby Lotion, which came in a clear glass bottle.  Earle Dickson, the inventor of BAND-AID® Brand Adhesive Bandages, was on our board of directors as vice president in charge of the Hospital Division.  The Company was still involved in wartime production during World War II in 1944, and just two years earlier had invented a waterproof cloth tape that was requested by the military, as part of the products we produced for the war effort:  that tape, believe it or not, was duct tape.  (Yes, the duct tape, which I promise will be the subject of a future post.) 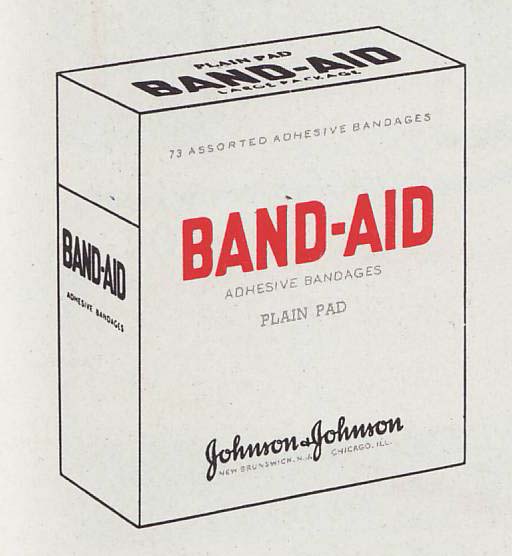 Wartime packaging -- cardboard instead of the familiar tin

Oh, and by the way, our iconic BAND-AID® Brand Adhesive Bandage tins had temporarily given way to cardboard packaging to conserve metal for the war effort.  In the midst of all of this, Johnson & Johnson went public with an initial stock price of $37.50 per share. 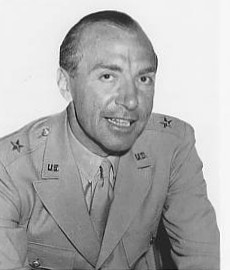 General Robert Wood Johnson, who had led Johnson & Johnson since 1932, had served for several months during the war in Washington, D.C. as head of the Smaller War Plants Corporation, and was back at Johnson & Johnson in 1944.  That year, he published But, General Johnson, a book about his experiences in Washington.  (The title referred to the most common phrase he had heard in response to his many ideas during his tenure as head of the SWPC.)  A year earlier, in 1943, Johnson had codified his philosophy about running a business into Our Credo, which still guides Johnson & Johnson today. 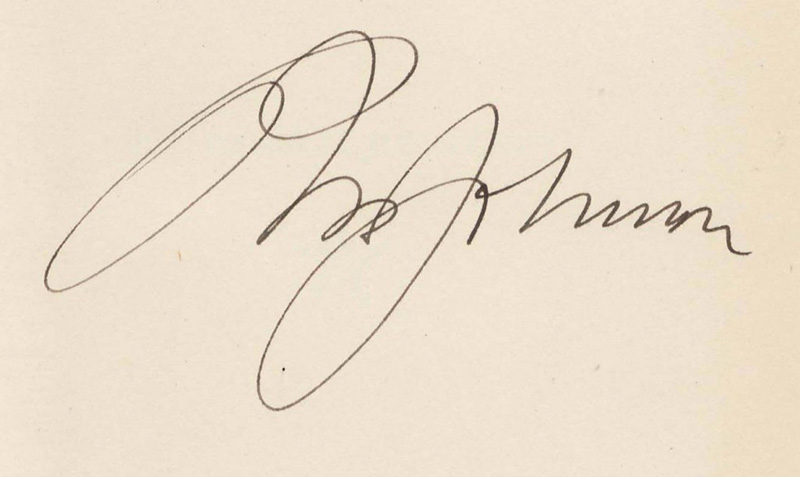 At a December 12, 1943, board of directors meeting, Johnson told the members of the board (back then our directors were all Company employees) that in 1944 Johnson & Johnson would become publicly traded.  But Johnson emphasized that the Company’s management philosophy – Our Credo -- would stay exactly the same under public ownership:  our first responsibility would continue to be to patients, consumers and customers, then to employees, then the community and last, to shareholders.

So in 1944, as a publicly traded company, Johnson & Johnson had to issue – for the first time – an annual report.  Here’s the cover of our very first Annual Report. 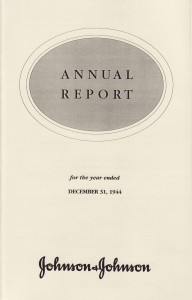 Compared to today’s full-sized annual reports, the 1944 report was small, measuring just a little less than six by nine inches and, as befits a wartime publication, a little on the plain side.  The report contained a letter to shareholders from Robert Wood Johnson, a brief description of the Company and some of its major affiliate companies, financial information and a list of members of the Board of Directors and officers of the Company.  The publication started with a letter from chairman Robert Wood Johnson, that began “During 1944 securities of Johnson & Johnson were offered to the public for the first time since incorporation in 1887.  This is the first consolidated annual report published by the Company.”   [Johnson & Johnson Annual Report, 1944] The concisely worded letter mentioned new products introduced that year and highlighted the Company’s conservative financial management (which had allowed the Johnson & Johnson to weather economic depressions in 1893, 1907 and 1929).  Finally, Johnson closed with “I express for the Board of Directors and for myself sincere appreciation for the loyalty of the men and women of Johnson & Johnson.  Their performance was the significant factor in the development of the Company in 1944, as in all prior years.”  [Johnson & Johnson Annual Report, 1944]

Our 1944 Annual Report was succinct and spare, as befitting the year in which it was published.  By the following year, the 1945 Annual Report would expand its coverage of Johnson & Johnson, talking about the Company's business philosophy, highlighting its products, and discussing the year more in depth, features that continue in our Annual Reports today, well over half a century later.

Very interesting post. I was a little surprised at the initial stock price. $37.50 seems like a lot of money back in 1944. Can't wait to hear the duct tape story!

Thank you once again, Margaret, for a fascinating look into our company's history and achievements. I look forward to the next edition, and many more to come. Marcia :)

"But General Johnson" is unfortunately long out of print and isn't available, but I will be blogging more about it in future posts on the blog.

I really like your blog and i respect your work. I'll be a frequent visitor.

I enjoy reading about the history of Johnson & Johnson. Would really like to be able to collect some of the articles written as well as books.

If anyone is interested in acquiring a copy of "But General Johnson", it can be found through out-of-print booksellers:

Many years ago I heard a story that Jonson and Johnson literally took off when an advertising campaign used the slogan "Whats best for baby is best for you." I am in the process of a dissertation for a degree and would be grateful for more information on this advert. place/who/when etc.

The advertising slogan you're referring to was used to advertise JOHNSONS® Baby Powder in its early days, and it read "Best for Baby, Best for You." JOHNSONS® Baby Powder was introduced in 1893, and it is true that advertising helped the product really take off in the years just after World War I. Advertising was coming into its own in the Nineteen Teens, and JOHNSONS® Baby Powder became the subject of the Company's largest ad campaign in its history up to that point. Before the success of Baby Powder and the growth of our baby business, Johnson & Johnson (founded in 1886) had been doing well and was known as a trusted manufacturer of sterile surgical dressings, sterile sutures and other medical products, as well as products such as medicated plasters. In fact, Johnson & Johnson had been founded to make the first mass produced sterile surgical dressings. The slogan "Best for Baby, Best for You" referred to the fact that adults could use the product too.

Hi, My name is Garrett and I am in the seventh grade. At my school I am participating in a History fair and duct tape is the topiic on which I have chosen. I have placed third at the school level and will be moving on to the parish level in late January. I came up on your site today and am really amazed at the things that I have learned. If you could give me or direct me to a site where I will get the most accurate information about the complete history of duct tape I would appreciate it. I have been able to find a number of photos and have been allowed to copy them for my project but I have not been able to find one of it being used during WWII. Do you know if there is a photo of its usage on the ammunition cases. This topic has turned out to be so much more involved than what I had expected. I am surprised at how much and where it has been used so far in history.
I doubt many Americans are even aware that it has been used in space.
Thank you for this website. It is very interesting.
Garrett

Since it was a wartime product, we don't have a lot of information in our archives specifically about duct tape, because its invention was for the war effort and not initially for a commercial purpose. The operating company that made it (Permacel) hasn't been a part of the Johnson & Johnson Family of Companies for many years. Although we don't (unfortunately!) have a photo of duct tape being used during World War II, the link I included above does contain a drawing from the 1945 Johnson & Johnson Annual Report of duct tape being used on a WWII airplane.

Wikipedia has an entry on duct tape, but I'm sure as your teacher will tell you, Wikipedia should not be used as your only source, and you should verify what you find out on Wikipedia by checking it against other sources. It's a good place to start when you look for information, and often the links to other sources at the bottom of the entry are really helpful. Here's the Wikipedia link: http://en.wikipedia.org/wiki/Duct_tape

You can also check some WWII military histories and see if any of them mention duct tape. Best of luck on your project!

In reply to by newton Chung

I don't have that information, but there is an Historic Stock Lookup section on our website, www.jnj.com: http://www.investor.jnj.com/stocklookup.cfm

What was the share price of jnj in july 1974

In reply to What was the share price of… by Anonymous

Charles, you can look up the historical share price here:  http://www.investor.jnj.com/stocklookup.cfm

In reply to When was Johnson & Johnson's… by Anonymous

Jena, I don't have that information, but you can find some historical dividend information here: http://www.investor.jnj.com/dividends.cfm