Let’s say you’re a Johnson & Johnson employee who wants to take better care of your health. You could visit the medical department for some advice, an exam or maybe a quick checkup, or attend a Company lecture on health and hygiene, or pick up one of the many pamphlets the Company publishes, or even get some exercise in one of the on-site facilities for employees – the swimming pool, or maybe the tennis court.  Maybe you would consider joining one of the employee athletic teams.  What year is it at Johnson & Johnson?  2009?  Not quite… it’s the 1910s.

The 1910s?  That’s right: almost 100 years ago.  My colleague at the JNJBTW blog recently posted a guest post from Fikry W. Isaac, MD, MPH, executive director of Johnson & Johnson Global Health Services, about creating a culture of health at Johnson & Johnson, so I thought it would be interesting to take a look at some of the things we offered employees in that area about 100 years ago.

One of the aseptic rooms in 1917, used in suture sterilization

Since Johnson & Johnson made the first ever mass-produced sterile surgical dressings and sutures, the focus at the Company was on strict cleanliness and antiseptic procedures -- to the extent that the Company’s germ-free manufacturing environments were cleaner and had stricter standards than those of most hospitals of the era.  Johnson & Johnson also published a number of pamphlets and bulletins on contagious disease prevention, public health, maternal and child health, and more. 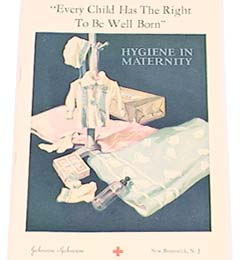 These publications were available to employees, and gave them the latest information on how to keep themselves and their families healthy.  Scientific Director Fred Kilmer also conducted classes for employees on a variety of subjects related to health and public hygiene.

The Company had formed the Employee Welfare Department in 1906, which oversaw a number of benefits for employees.  Among them was a medical department with hospital and retiring rooms that could be used to treat employees in medical emergencies, or provide space for employees to lie down and rest if they weren’t feeling well.  In case of an injury, trained employee volunteers could provide basic first aid until the doctor arrived (and of course, they would have the Company’s wide range of products with which to do so).  But that wasn’t all.  According to the October, 1917 edition of THE RED CROSS MESSENGER, “The company employees a woman visitor whose mission of mercy is to call upon employees who are ill and to do all she can to help them and to see that they get proper medical attention.”  [THE RED CROSS MESSENGER, Vol X, No. 2, October 1917, p. 241] 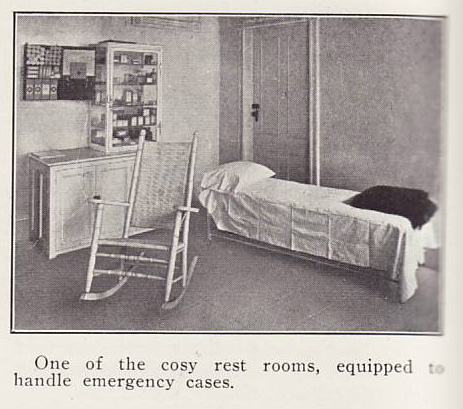 Employees also had ice-cooled filtered water to drink at work, courtesy of the Company’s elaborate water filtration system.  The ice was made with filtered water, too.  Here’s a picture of one of the water coolers from around 100 years ago, in the scientific laboratory: 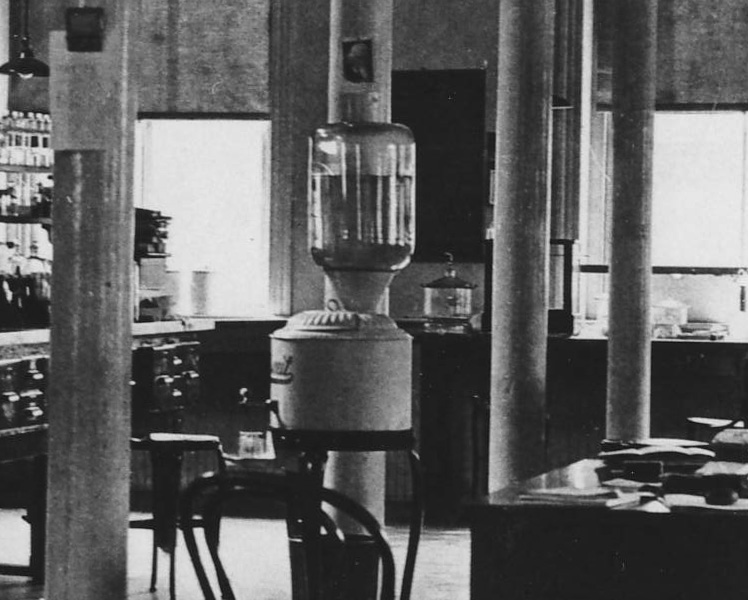 Johnson & Johnson had an outdoor tennis court, an indoor area in the Laurel Club for either tennis or badminton, and a swimming pool for employees that was connected to the Cotton Mill.  The pool had showers and a dressing room, with separate hours for men and women.  Among the classes given for female employees 100 years ago were dancing and calisthenics.

Here’s a picture of our outdoor tennis court in 1917: 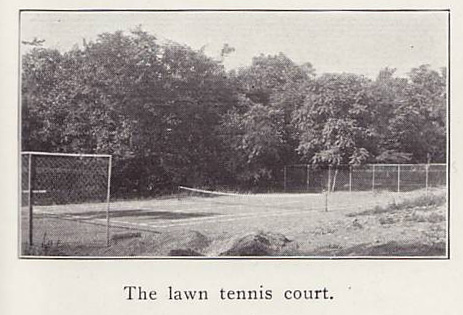 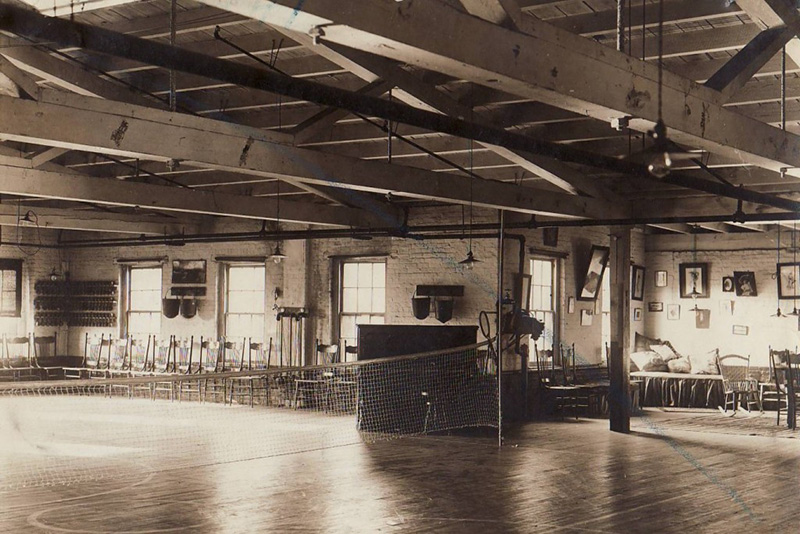 And here’s the swimming pool (the pool water was pure filtered water, too): 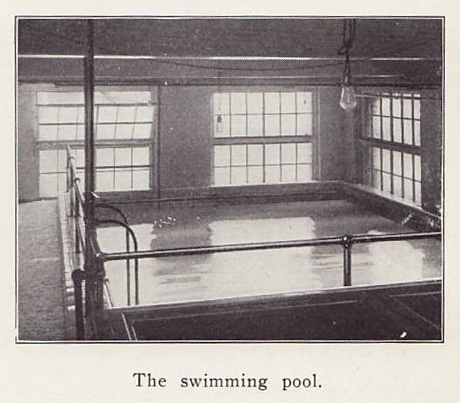 Employees also had a variety of sports teams.  Male employees formed the Johnson & Johnson Athletic Association, which had a baseball team and competed at the New Brunwsick, N.J. YMCA in early 1919.  That competition included basketball, tug of war contests, swimming races and diving.  [THE RED CROSS MESSENGER Vol. XI, No. 3, 1919 p. 81]  There was a women’s basketball team, shown in the 1907 photo below.  They look like they would have been pretty tough competitors. 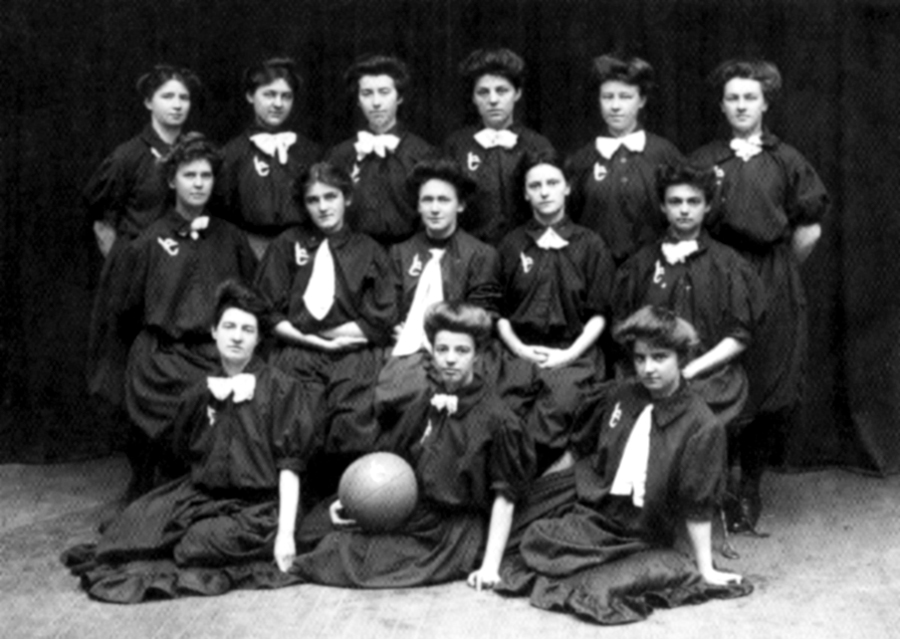 Don't even THINK of messing with us on the basketball court

And here’s the men's bowling team from 1914, made up of office employees. The bowling team had been in existence since at least 1900. 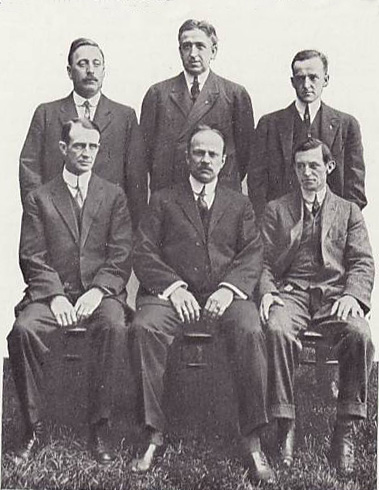 So why did we do all of that roughly 100 years ago?  According to Fred Kilmer, it was all “…part of the service which Johnson & Johnson supply to their employees with a view of securing and retaining healthy and contented operatives.”  [THE RED CROSS MESSENGER, Vol. VII, Nos. 3 and 4, September, 1914, p. 88]   That same basic view continues to define Johnson & Johnson today.

This is fantastic! Thank you for sharing these great stories from the archives. I particularly liked the reference to the women's basketball team wearing soft shoes referred to as "sneakers"!

As a J&J employee, I value the importance our company places on our health and wellness and can see that these roots were established long ago (although I am happy to see that we've progressed from wearing flannel blouses and matching bloomers!

Great article!! I too loved the "sneakers" line. How wonderful that J&J has always cared about the health and wellbeing of its employees! Even extending to the filtered water, which was so novel back then. Thanks, Margaret, for these wonderful posts.

How interesting! It's awesome to know that J&J's philosophy of keeping its employees healthy started so long ago. I've always felt that J&J was ahead of its time.

Love the photos, too! Thanks for posting them!
Irma

Ditto the previous comments - some great photos. Always interested from an ergonomic point of view on the level of work station / facility layouts, seating, equipment adjustment back in time to demonstrate how far we have progressed.

Keep up the great work.

I have been with J & J for a while now and have visited numerous sites around the world. Most of them had excellent workout facilities as well as programs. Now I see we all of the originated from. Fantastic! I only wish the Japan affiliate would offer the same programs on site.

What a fantastic piece of history....this is impressive!