New Brunswick, New Jersey is known for many things…such as Rutgers University, two major hospitals, and of course it’s been the home of Johnson & Johnson since 1886. But did you know that at one time New Brunswick was known as “the most Hungarian city in the United States?” And that many members of its Hungarian community worked at Johnson & Johnson? 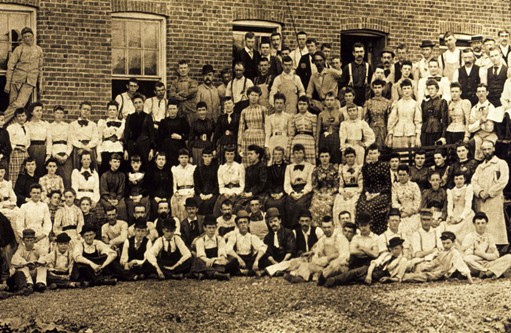 Johnson & Johnson employees, many of whom were from the Hungarian community, circa 1900

New Brunswick’s historic Hungarian population is still reflected in some of the city’s neighborhoods, its American Hungarian Foundation, in its annual Hungarian Festival, in the ties between New Brunswick and its sister city in Hungary, Debrecen, and in the history of Johnson & Johnson…which at one time had an employee population that was more than two-thirds Hungarian. 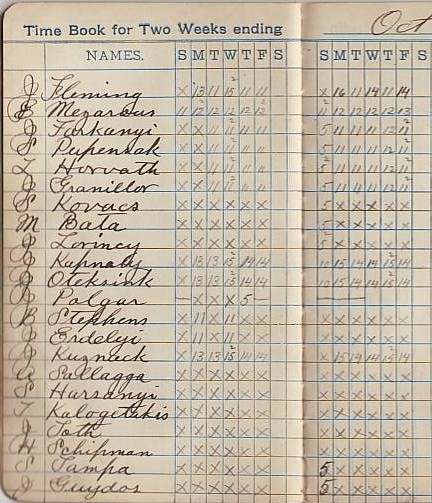 Here’s an example -- a page from an old Johnson & Johnson ledger book from 1914-1915 showing that in just the Bleaching Department in the old Cotton Mill, there were employees with the last names Farkanyi, Horvath, Harsanyi, Kovacs, Polgar, Mezarous, Erdelyi, Toth and, on another page, Dudas, all a proud reminder of the Company’s close ties with New Brunswick’s Hungarian population. 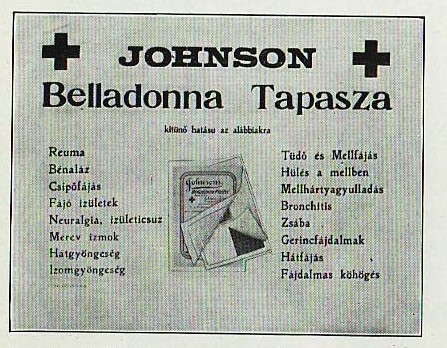 Hungarian immigrants first started arriving in the U.S. in large numbers around 1850, after Hungary’s defeat in the 1848-1849 War of Independence, in which Hungary tried to gain self-rule from Austria. Large numbers of Hungarians settled in New Jersey and especially in New Brunswick, which had lots of industry to provide employment. Besides Johnson & Johnson, there was a cigar box manufacturer (which explains why many of our early medicated plasters were in cigar-box packaging…we bought the boxes from the neighboring factory), a button factory, a wallpaper factory, and more. Over the years, successive waves of immigrants from Hungary continued to make their way to New Brunswick until more than a third of the city’s population was of Hungarian descent. 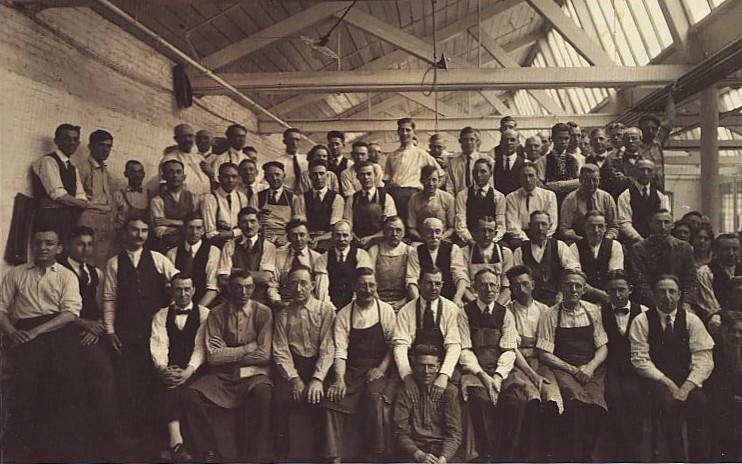 Early Employees, Many of them from New Brunswick's Hungarian Community

Bottom of 1908 Cotton Mill Celebration Dance Card with “Good Night" in Hungarian and other languages.

Johnson & Johnson provided English lessons and other classes for its Hungarian and other employees, as well as very generous benefits at a time when it was unusual to do so.

General Robert Wood Johnson was particularly close to the Company’s employees of Hungarian heritage, often accepting invitations to their homes, to weddings and other celebrations. This relationship started when Johnson was just a teenager and came to work in the factory during the summers and then full time after his father died. He was befriended by his Hungarian coworkers as they worked side by side, and the relationship continued through his adult life.

To this day, the Company continues to have a number of New Jersey employees and retirees of Hungarian descent….a relationship that still continues a century later.

Update – I forgot to mention that the title of this post, “Hungarian University,” was a nickname given to Johnson & Johnson because of its large percentage of Hungarian employees. The Company’s generous benefits and steady employment at a time when that was uncommon offered great opportunity for members of the Hungarian community who worked there.

This is an excellent article describing the Hungarian involvement in early J&J history. Thank you for writing it. I am a J&J employee of Hungarian descent. I am proud to work for J&J for a number of reasons but am even moreso now that I know how accomodating the company was in fostering the well-being of an immigrant population making an extremely difficult transition thousands of miles from home. This shows how committed J&J was to the community in the early days and I believe this is still reflected by a strong commitment to its Credo values today.

Just stumbled onto this site as I am looking into my grandmother's life. Her name was Flora Berta and she came over from Hungary in 1906 to work for J & J. My father told the story that my grandmother was "sold" by her mother to J & J. So I am interested in knowing how J & J got its workers. Were they given some money to come over or what? Were they indebted for a period of time? The story is that my grandmother washed cotton that came by boat up the Raritan River. Later I know that she worked in a cigar factory.
Is there a way to look at old pictures? Is an archive open to the public?
Is it possible to find out more about my grandmother's work history with J & J?
Thanks for any help.
How can I find out more about my grandmother?

No employees were ever "sold" to Johnson & Johnson. The Company got its Hungarian workers partly by word of mouth. Johnson & Johnson treated its workers extremely well, which was unusual in that time period, and it offered steady employment, so it was a very desirable place to work. It's possible that the Company may have paid people to recruit workers, or paid a bonus to family members to recruit new employees...which may have given rise to the story that's been passed down in your family. It's also possible that some workers may have been given some money to come over, but no employees were ever indebted for any period of time. They were free to leave any time they wanted to! Many employees stayed out of loyalty to the Company because they were treated so well. If you're interested, here's a link to a post that talks about what it was like to work here 100 years ago: http://www.kilmerhouse.com/?p=82

Cleaning cotton was actually a very important job here. It did come to J&J via boat on the Raritan, and it was washed and cleaned to make it white before it was sterilized, because it went into making sterile bandages and dressings. Unfortunately, we don't have an archive that's open to the public, and we don't have individual employee photographs, though we do have many group shots like the one in the post that's linked above. I don't think we kept employee records from 100 years ago, but I will check and if I find out anything, I'll post it in the comments section for this post. You might also try the American Hungarian Foundation in New Brunswick: http://www.ahfoundation.org/

my grandfather was the groundskeeper at johnson's home till he died in the mid 50's. he was given a life estate on the property. his name was dennis vass and he, at age 21, immigrated here in 1906 from hungary. he had 1 son, my dad, who also worked for j&j and in fact, retired from the company. it is true that both robert wood johnson's took a special interest in their people. i know he consoled my grandfather in hard times during and immediately after ww1. when my dad badly injured his back from a fall at work (chicopee-nonwoven division in milltown), j&j paid his full salary for over a year till he was able to return to work, and then they adjusted his workload to protect his back. when chicopee closed its doors to relocate to north carolina, j&j offered to relocate my dad. he decided to retire early rather than move and was given a very generous severence package as well as unemployment for quite a while before he started collecting his pension from the company. my dad lived to age 83 and in the last 7 or 8 years of his life, began attending the annual j&j dinner for their 25 year club retirees. j&j would give a really nice gift to these people as well as wine and dine them for the evening. they also took professional table photos and my dad really treasured those pictures. i am no fan of corporate america today but i just want to let it be known that this company was (and hope still is) pretty special. my dad only had a third grade education. they were very good to him and he in turn was a great and loyal employee. i am very greatful to j&j; they are the reason i am an american. (my grandmother returned to hungary in 1913 to take care of family business and have her child and when the war began, could not leave). i too am researching family roots and stumbled onto this website.

An ethnic Hungarian lady from Romania lived with my husband and me for 22 years. She just died on 1/1/11. She had a large library of very fine books, some of them rare and quite expensive. I am trying to find someone(s) who would be interested in purchasing these books to try to get the money for her final expensives. If you or anyone you know would be interested, please write an email to me. I would be happy to send you a list of the books.

Also she authored a book of selected Hungarian folktales. I have 99 new copies of this book. I would like very much to sell these as well to raise money for the these expenses.

In reply to by Virginia McFarland

Here's the contact information for the American Hungarian Foundation in New Brunswick, N.J. They may be interested in the book collection, or know someone who is. Here's their email address: info@ahfoundation.org and the link to their website: http://hstrial-pfazekaz.homestead.com/

Being born in Hungary, I am proud to continue the tradition of working for Johnson & Johnson in New Jersey.