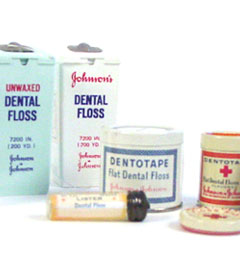 Dental floss has been called “the new duct tape” (a product that also has a tie to Johnson & Johnson!) because of its many inventive uses by consumers.  As bizarre as some of these uses may be, the product’s origins are equally unusual, and they go back not only to the beginnings of Johnson & Johnson, but to the early days of one of its medical devices affiliate companies as well.

Although people have apparently been using things to clean between their teeth since prehistoric times, this article in American Heritage explains that dental floss was officially invented somewhere around 1819 by a dentist  (who else?) from Vermont named Levi Spear Parmly.  Parmly recommended his invention as one of the three tools (the other being a toothbrush and a dentifrice – that’s a tooth-cleaning preparation) for preventing tooth decay.  According to American Heritage, many Americans at that time lacked an inexpensive tooth powder, so they cleaned their teeth with two common items known for their abrasive qualities:  salt and, amazingly enough, gunpowder.  Even after tooth powder (the forerunner of tooth paste) came into use, people still didn’t use dental floss.  Ordinary household sewing thread wasn’t strong enough to withstand the wear and tear of getting it between a person’s teeth, and the stronger silk dental floss was hard to get and too expensive.  So people augmented their tooth care by using the sharpened ends of quills or slivers of wood to clean between their teeth. 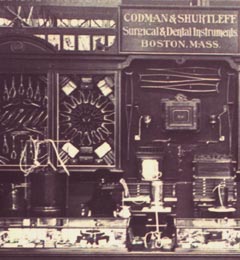 The first recorded patent for dental floss was issued in 1874 to Asahel M. Shurtleff.  Shurtleff was a partner in a Massachusetts medical devices company called Codman & Shurtleff, which became part of the Johnson & Johnson Family of Companies in 1964 and remains a part of it today.  Codman & Shurtleff started marketing unwaxed silk dental floss in 1882, according to American Heritage Magazine. But it was Johnson & Johnson that first made dental floss widely available.  And the reason for that?  Sterile sutures.   Since 1887 sterile sutures were a part of the Company’s product line, and they were a natural outgrowth of the founders’ mission to provide the first mass-produced sterile dressings for surgery.  Catgut and silk were the most common suture materials, and the Company bought silk in quantity to use in the manufacture of sterile sutures.  The Johnson brothers were always looking for ways to improve public health, and they had the idea of taking the leftover silk that wasn’t used in suture production and making a dental floss that could be produced in quantity and packaged to make it affordable.  In keeping with its origins in the Company’s suture product lines, there was even a Lister Dental Floss that was impregnated with an antiseptic. 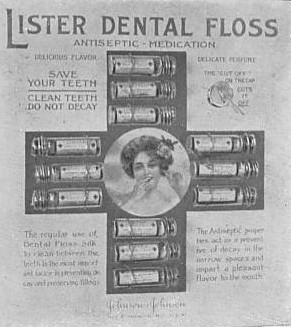 The Company advertised dental floss by placing counter displays in drug stores, along with a variety of ads and show cards that were displayed by druggists.  This display ad from 1914 shows an illustration of a woman vigorously flossing her teeth, and would have been displayed on a drugstore counter.  The actual tins of dental floss are attached to the bottom of the ad. 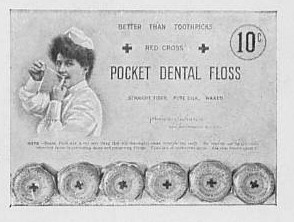 The July, 1898 Johnson & Johnson price list listed plain and waxed silk floss in 12 and 24 yard spools.  It was initially packaged in flat round metal containers, and then cylindrical tins that held a small amount of floss.  The packages had a built-in cutting device so that people could conveniently get the amount of floss they needed.  In the Nineteen-teens, the Company packaged dental floss in a glass container, still with the same metal cutter for cutting the floss.

In 1941, due to the demand for silk to make parachutes for World War II, the Company switched to nylon for its dental floss./p>

Though the packaging design has been modernized over the years, moving from metal to glass to plastic, the basic concept of most dental floss packaging is still the same as it was over 100 years ago – floss wound around a spool, with a small metal cutter on the package. 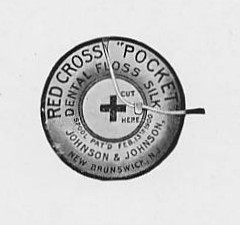 In the beginning of this post, I mentioned that there was a connection between Johnson & Johnson and duct tape.  What was it?  Stay tuned for a future post on that subject.

What a great blog! I'm constantly looking for articles on dental health and have been subscribed through "google alerts".
The pictures of early products are fascinating.
Please keep me in the loop as you continue to post.

If you'd like some pictures of early items and advertising for J&J products, I'd be pleased to supply them. I've collected J&J items for over 25 years and have many that are not shown in their '100 years' book. For example, a small glass and metal counter display piece showing another nurse (different than the one shown in the dental posting) and claiming the 'floss silk' as 'surgically clean' houses my own dental floss collection.

Keep up the good work.

Thanks for the kind offer, and I'm glad you like Kilmer House! I couldn't offer you any monetary or other compensation in return, but if you have any pictures of our early products and ads that you ever want to send me, I'll be happy to put them up on the blog and credit you.

Thanks for the informative site. I picked up four J&J items at an estat sale the other day. Two Dental Floss Silk tins, a Dentotape (Keton) tin and a Moleskin tube. Your site gave me some useful information. I still need to do some searching to get a better handle on the age of these items, but this was a good start.

I have a glass container with Johnson & Johnson dental floss. I see many that lay on there sides but this one stands upright. Does anyone have information on this? I got it from an estate sale of a former doctor.

Thank you for the informative website. I had no idea how old an item was that I bought (A never opened jar of new era dental floss by J and J Co.)until I seen your site. Thanks again.

very informative website, I have a glass container of lister dental floss (keton)
10 yard waxed, round white center on blue background, The glass container is flat bottomed and will stand upright and has a metal cap w/cutter The above info reaffirmed my belief that it was made in the 1920's, if there is any more info that will nail down the exact age, I would appreciate it. I don't see a way to post a picture of it.

In reply to by Terry Nye

Looking at some of our price lists from the 1920s, your Lister's Dental Floss, 10 yards, in a glass container, would definitely be from the 1920s. It appears in our 1923 price list. If you want to send me a picture through the blog's email, I would be happy to compare your photo to the picture of the product in our price lists, and give you a more definite answer. The email is kilmerhouse@its.jnj.com

I came across your Blog and thought I would have a look in the dental part as I am a dental hygienist and find the hisotry fascinating. Then for what seemed like on 20mins I noticed my hands cold so decided to turn on heating. I looked at the clock and to my suprise I had spent over an hour reading all about the history of J&J. Gripping stuff. Thankyou Margaret. Fascinating read

In reply to by Bernadette

Bernadette, I'm glad you like the blog, and I hope you keep reading!